AdGuard VPN Review: Can It Also Guard Your Privacy?

Developed by the popular ad-blocking company of the same name, AdGuard VPN is a “freemium” VPN service separate from the ad-blocker. Though AdGuard’s low cost of entry and excellent reputation may seem like an appealing combination, can its VPN guard against more than just ads?

While blocking ads and web trackers are an important part of securing your privacy, a virtual private network or VPN can do all of these things and more. A VPN can unblock content, secure your privacy, and protect your data from hackers and government surveillance by rerouting your web traffic through a secure network of encrypted servers.

But can an ad-blocking company make a truly great VPN? In this review, we’ll see just how well AdGuard VPN performs. We’ll also explore some popular alternatives to help you make the best buying decision.

A relative newcomer to the VPN scene, AdGuard VPN offers a logical “next level” to their long-established adblocker. Based in the Republic of Cyprus, AdGuard exists in a safe jurisdiction. That means there’s no law requiring AdGuard or other VPN providers to hand over user logs or activity.

AdGuard VPN also offers up to five simultaneous connections. While this number is similar to those of other VPN providers, there’s also no cap on the number of devices users can connect with. This option may be appealing to users on shared networks or who have many devices.

Usually, features and performance vary depending on whether you’re using the free or premium option. While the free option offers some pretty impressive capabilities (more on this point later), it places caps on bandwidth, data, and server selection.

Another unique feature we noticed was its proprietary VPN encryption protocol and automatic Wi-Fi protection. While AdGuard claims that its technology is better than an “out-of-the-box” solution, it’s questionable considering that the alternatives are industry-leading protocols and security features.

Even so, the VPN still offers basic security options such as an Internet kill switch (IKS) and split tunneling. While some of these security features are available for use, they still come with limitations depending on which VPN version or device is used. AdGuard continues to increase security support as they make the VPN available on other devices.

Part of this unblocking ability is thanks to the provider’s VPN server network spanning 52 countries. Unlike many free VPNs, AdGuard offers free servers in the US, UK, and several European countries. While the free plan comes with data caps, it’s still a great choice for unblocking streaming services on the cheap.

However, whether free or premium, AdGuard VPN offers reliable unblocking when using its US and UK servers. Both types of users can also reliably access Netflix and Disney+ using US, UK, and some European servers.

Results may vary for unblocking the Great Firewall of China, however. Though the VPN service offers servers in Hong Kong, there were no dedicated Chinese servers at the time of writing this review. As a result, an AdGuard VPN user in China can only expect results as good as any other Hong Kong connection.

While AdGuard doesn’t specify the number of servers on its network, users can choose between 52 different server locations.

VPN server selection varies between membership types, however. To AdGuard’s credit, free users can access dedicated servers in the US and UK, along with some EU countries and even outliers like Ukraine.

The downside is that free users have bandwidth and data caps of 20 Mbps and 3 GB per month, respectively. While these caps are enough to occasionally stream and browse, most users would find them far too limiting on a long-term basis.

On the other hand, Premium users enjoy a much greater server variety along with unlimited data and bandwidth. Additional server locations include various points in the US and countries such as Japan, Israel, Luxembourg, and more. This variety puts AdGuard’s premium option on par with other leading providers.

While these premium perks may sound appealing, there are still some drawbacks. Our speed test showed a massive decrease in speed while using the VPN service. Thankfully, AdGuard VPN lists servers according to speed, which might help users avoid significant drops in performance. 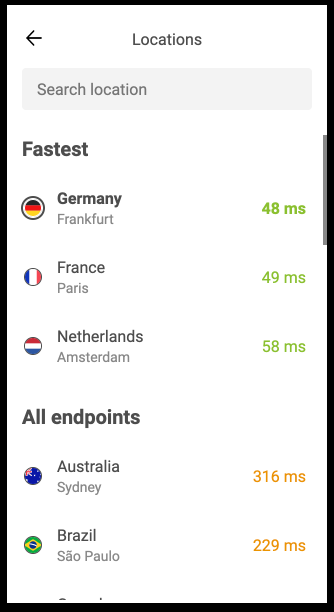 We decided to check out these claims of slower speeds by connecting to the service and seeing what happened.

We started with great speeds with no active VPN connection.

Then we connected to AdGuard VPN.

Our speeds didn’t just drop. They were decimated. We saw a 90.6% drop in our download speed, which is unacceptable, even from a free VPN.

To put this in perspective, we were in Orlando Florida, and connected to a server in Miami Florida. That’s about three and a half hours away, at a distance of 235.4 miles. There’s no way our speeds should have suffered to such an extent.

However, even if the encryption method is truly HTTPS, this method doesn’t hold a candle to the AES 256-bit encryption standard in other leading providers.

The ambiguity doesn’t stop there: AdGuard defaults to their own proprietary VPN protocol. While its inner workings aren’t entirely clear, it uses HTTPS connections and sends information through data instead of packets.

In any case, AdGuard claims that its protocol allows them to disguise VPN traffic without sacrificing speed. With questionable speed test results, however, we’re not sure if AdGuard VPN’s protocol is necessarily superior in any way. Plus, without a clear encryption method, any boost in speed might be coming at the sacrifice of security.

Despite these drawbacks, AdGuard VPN offers a few security benefits. One of these is a robust selection of DNS servers, which helps users avoid leaking their browsing activity to their Internet service provider (ISP) or other prying eyes.

In addition to existing in the safe jurisdiction of Cyprus, AdGuard doesn’t collect activity or collection logs from its users.

As a result, AdGuard VPN users can rest assured that their privacy will remain safe. Even if AdGuard was based in an unsafe jurisdiction where there were laws requiring the VPN provider to hand over user data, its no-log policy would guarantee that there would be nothing to hand over.

AdGuard also openly supports torrenting. It doesn’t have dedicated peer-to-peer (P2P) servers like some other providers. However, torrenters and anyone else using AdGuard VPN can still download safely and anonymously.

Unfortunately, AdGuard doesn’t accept anonymous forms of payment, including cryptocurrencies such as Bitcoin. Despite all of the privacy benefits of AdGuard VPN, this factor alone may be enough to discourage privacy-minded users who value their anonymity.

AdGuard VPN started as largely a mobile VPN app and browser extension, but it has since added a desktop app for macOS and Windows.

Since AdGuard doesn’t offer any VPN protocols besides its proprietary protocol, it’s currently not possible (or just extremely difficult) to install the VPN on a router. Linux users are also at a loss with no support apart from browser extensions.

While AdGuard VPN might not be a top contender regarding security and compatibility, it’s still backed by an excellent support system.

In addition to an easy user interface, AdGuard VPN is extremely easy to install as either a desktop app, browser extension, or mobile app, which is a great option for users who want to get the best possible performance.

AdGuard’s excellent reputation spanning more than a decade also backs the VPN. Building off an already-excellent 24/7 live chat, knowledge base, and email support, AdGuard VPN users can troubleshoot any kind of issue at any time of day.

Free memberships may be free; however, they come with significant bandwidth and data caps (20 Mbps and 3 GB/mo, respectively), as well as a limited number of servers to choose from. While this option may be fine for some mobile users, even the most low-key users may find themselves wanting more.

Paid subscriptions start at $5.99 per month and offer unlimited bandwidth and data, along with a complete selection of AdGuard’s VPN server network spread across 52 countries.

While the $5.99 price tag is well below that of most leading VPNs, the ambiguous security and privacy features make AdGuard VPN something of a gamble. For a slight premium, users can enjoy the overall top-notch performance of some of the world’s leading VPNs. 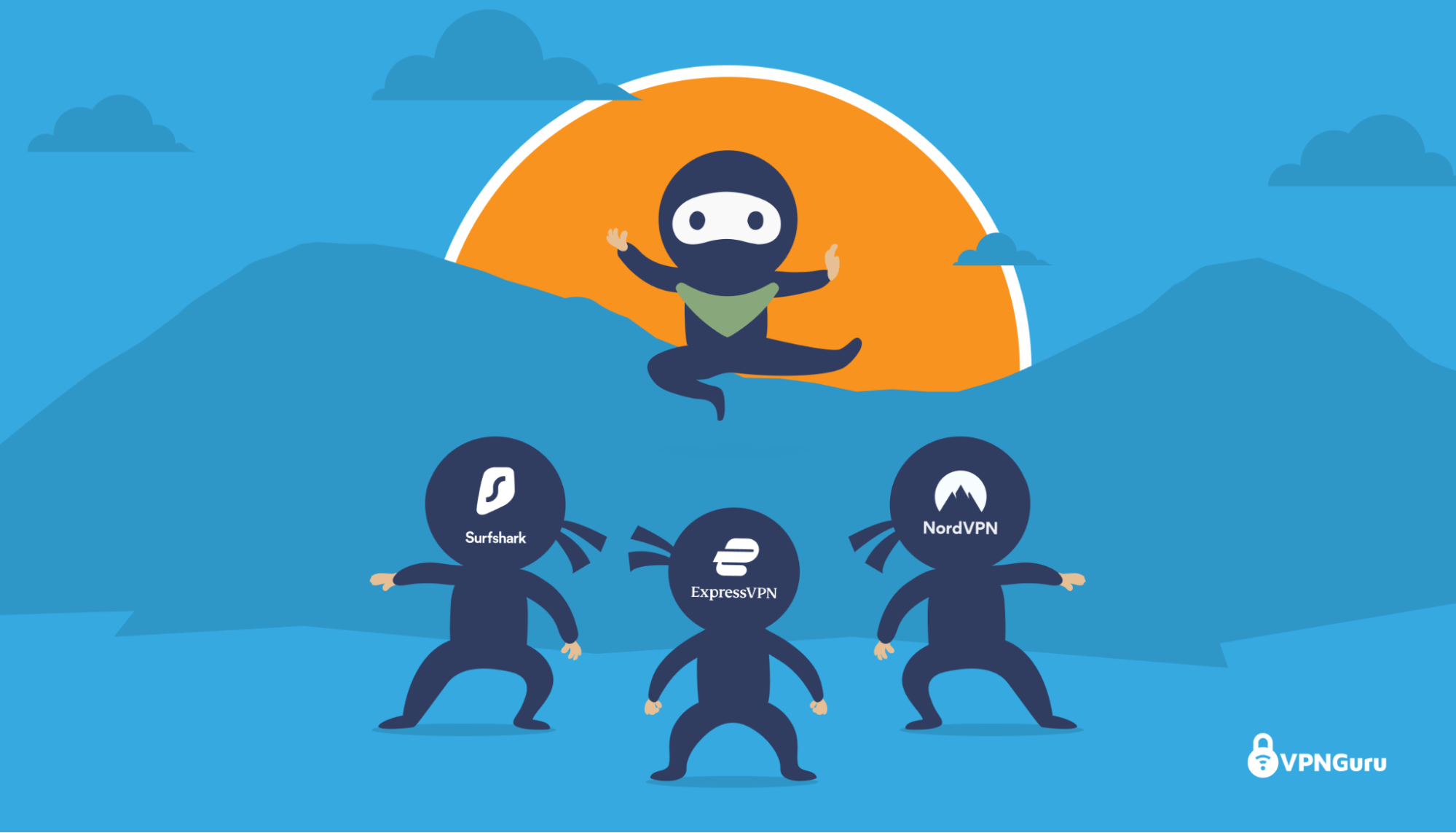 Though you won’t go wrong with AdGuard VPN, only a slight premium will get you the best possible security, privacy, and performance from other leading VPNs on the market. Check out some of these popular alternatives.

With 3,000+ servers in over 90 countries, ExpressVPN offers nearly double the server locations of AdGuard VPN— and with none of the ambiguity. With complete transparency from server count to top-notch AES 256-bit encryption, ExpressVPN users are virtually guaranteed the best performance VPNs have to offer.

Where AdGuard VPN’s speed may vary significantly depending on server location and selection, NordVPN has much greater consistency and with a whopping 5,000+ servers spread across 60 countries, it’s no wonder! For the best possible download speeds for browsing, streaming, and torrenting, consider NordVPN.

Where AdGuard VPN and other providers put limits on simultaneous connections and devices, Surfshark doesn’t. Offering unlimited connections on a robust network of 3,200+ servers in 65 countries, Surfshark is the perfect alternative for users with tons of devices or network users.

How Good is AdGuard VPN? 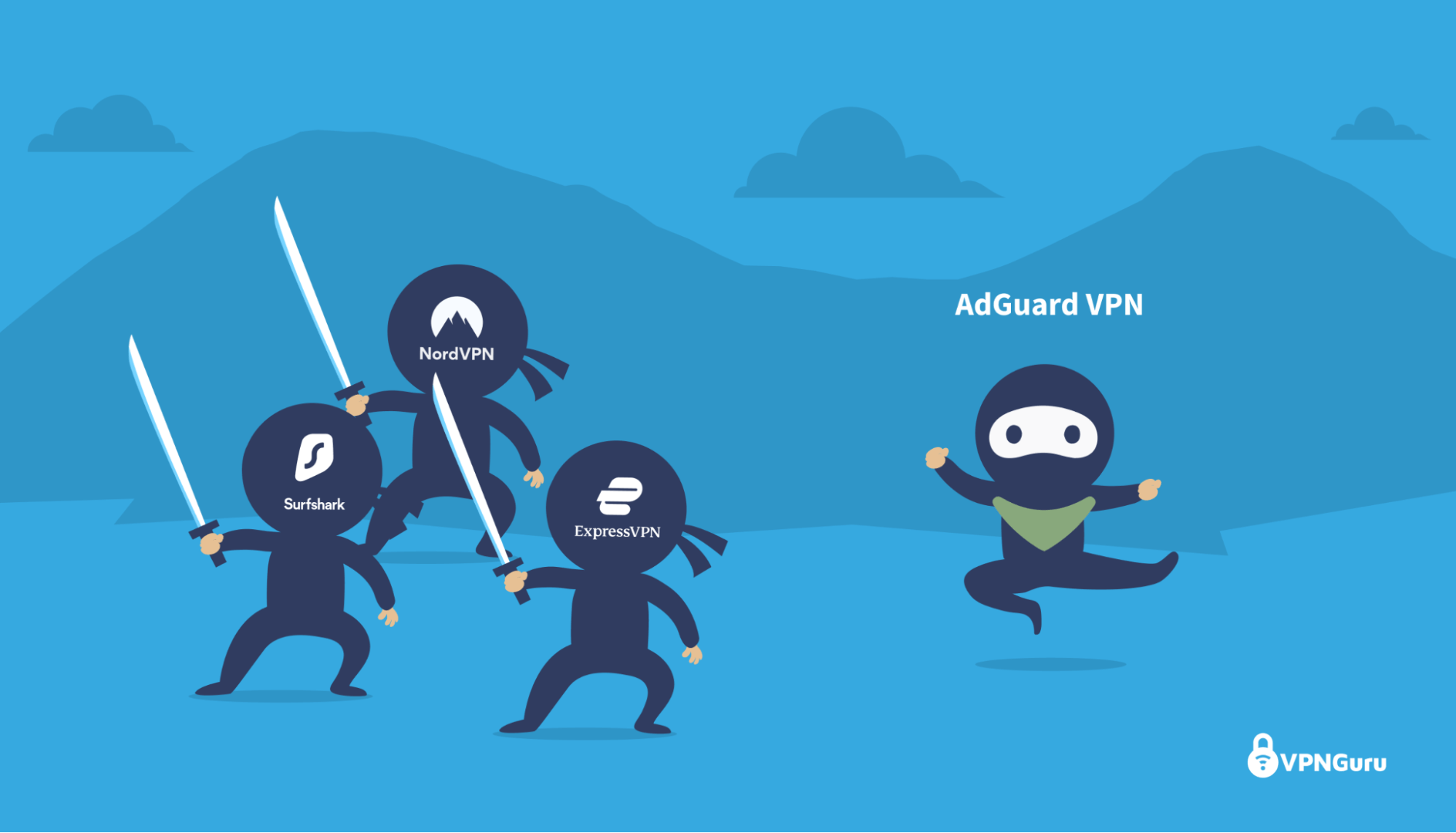 Though AdGuard VPN is a solid contender, it doesn’t hold a candle to top VPN providers such as ExpressVPN, NordVPN, and Surfshark, even with its lower price. With no clear VPN protocol or encryption method, privacy- and security-minded users should look elsewhere.

To learn more about the best VPNs on the market, visit our VPN reviews page.

AdGuard VPN Review: Can It Also Guard Your Privacy?