What is a P2P VPN, and how does it work?

If you’re a frequent Internet user or have a VPN, you may have encountered the term P2P (Peer-to-Peer). It’s a type of network connection that allows you to transfer files between peers.

It’s used most often for downloading and transferring files across the web, and it’s one of the most secure and scalable options available. Many businesses use peer-to-peer connections to send files to customers. It’s also commonly used for torrenting.

In this article, we’ll go over what P2P is, what it’s used for, and answer some of the most frequently asked questions about P2P sharing.

What is P2P network sharing?

Peer-to-peer, or P2P, is a type of network used primarily for downloading torrents, although some companies use it to distribute files between users. In the past, companies like Napster used it to transfer music between user machines.

An estimated 28 million users connect on peer-to-peer networks daily to share files. The majority of these users are torrenting.

Each computer in a P2P network is known as a peer. They exchange information with one another. This differs from a client-server network in a few ways.

In a client-server network, users are not sharing information with each other. Rather, a client requests a service (a file, most likely) from the server, and the server provides it.

What’s unique about a peer-to-peer network is that each peer is equal. No one has higher privileges, and no main administrator is running the server.

Because there is no central server, each peer acts as both a client and server at the same time. 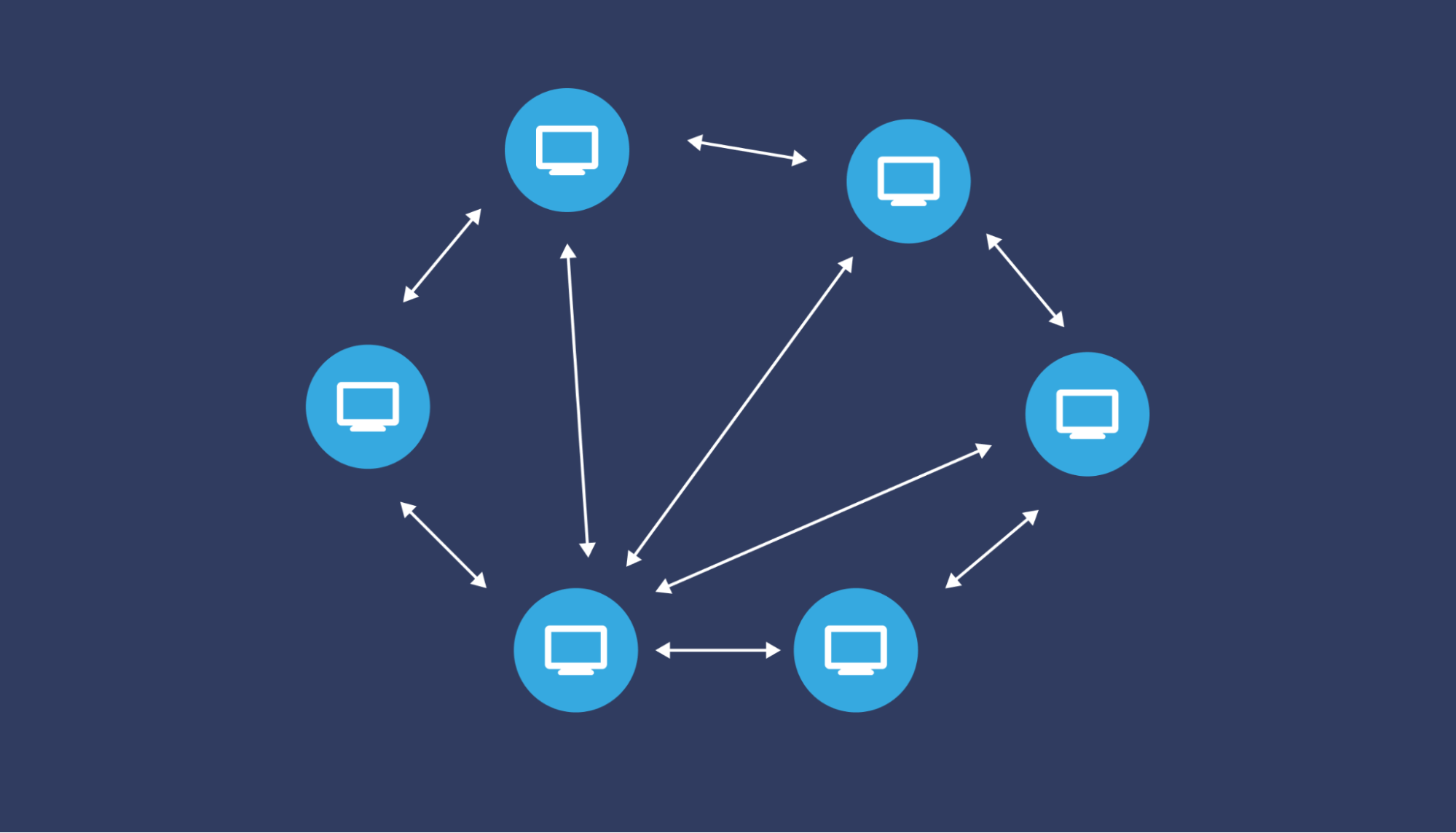 What is P2P used for?

When you download a file from a P2P network, it’s not delivered in a traditional Point A to Point B way. Instead, it’s delivered in bits and pieces, coming from other users connected to the network who already have parts of the file in question.

It’s a two-way street, as you’re also sending bits and pieces of files you already have downloaded to other users.

According to Microsoft, Windows 10 updates use both client-server networks and P2P networks to deliver files between users. Its goal is to reduce network traffic to Windows update servers and speed up the time it takes for you to receive an update.

Peer-to-peer network architecture is also used to share large files. In the past, Blizzard used P2P to distribute updates for its online games World of Warcraft and Starcraft II.

P2P networks allow companies to distribute content on a budget simply by using the bandwidth of peers rather than relying on client servers, which can be expensive.

While P2P sharing and torrenting are not illegal, downloading copyrighted movies, video games, music, and software is. 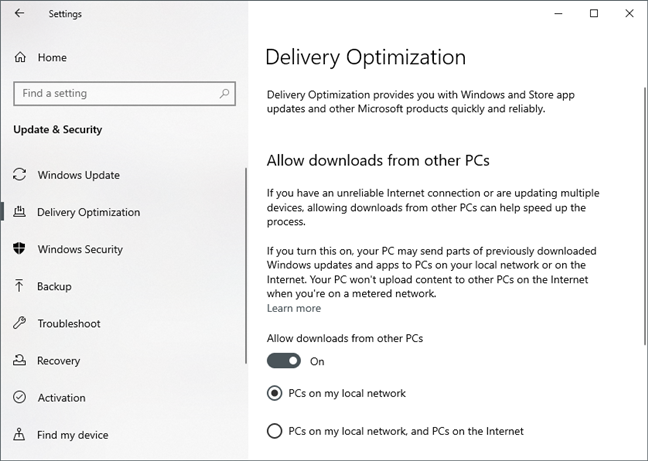 Why P2P servers are useful

Using a P2P server is useful for many reasons.

Unlike a client-server network with a clear home base, it’s hard to take down a P2P network. If you shut one peer down, there are still hundreds of others uploading the file. To shut it down, you must shut down every peer.

On that same note, peer-to-peer servers are also scalable. When adding new users, there’s no need to configure the server or do a lot of maintenance. That’s because the information is shared between users rather than a central server, so there’s no risk of running out of space.

P2P networks can also be incredibly fast. For the most part, the larger a peer-to-peer network, the faster it will be. Because you’re downloading a file from multiple sources at the same time, it’s able to give you speeds faster than client servers.

One aspect of P2P servers that could be considered a con is an alarming lack of security, especially when torrenting. Anyone can upload a torrent for you to download, and those files could be filled with harmful malware.

Aside from that, you’re also exposing yourself to cyber threats.

When you’re torrenting, your IP address is exposed. Anyone can access it to track your location and see what you’re downloading.

Hackers can use this information to find your personal information, and ISPs are always on the lookout for piracy. 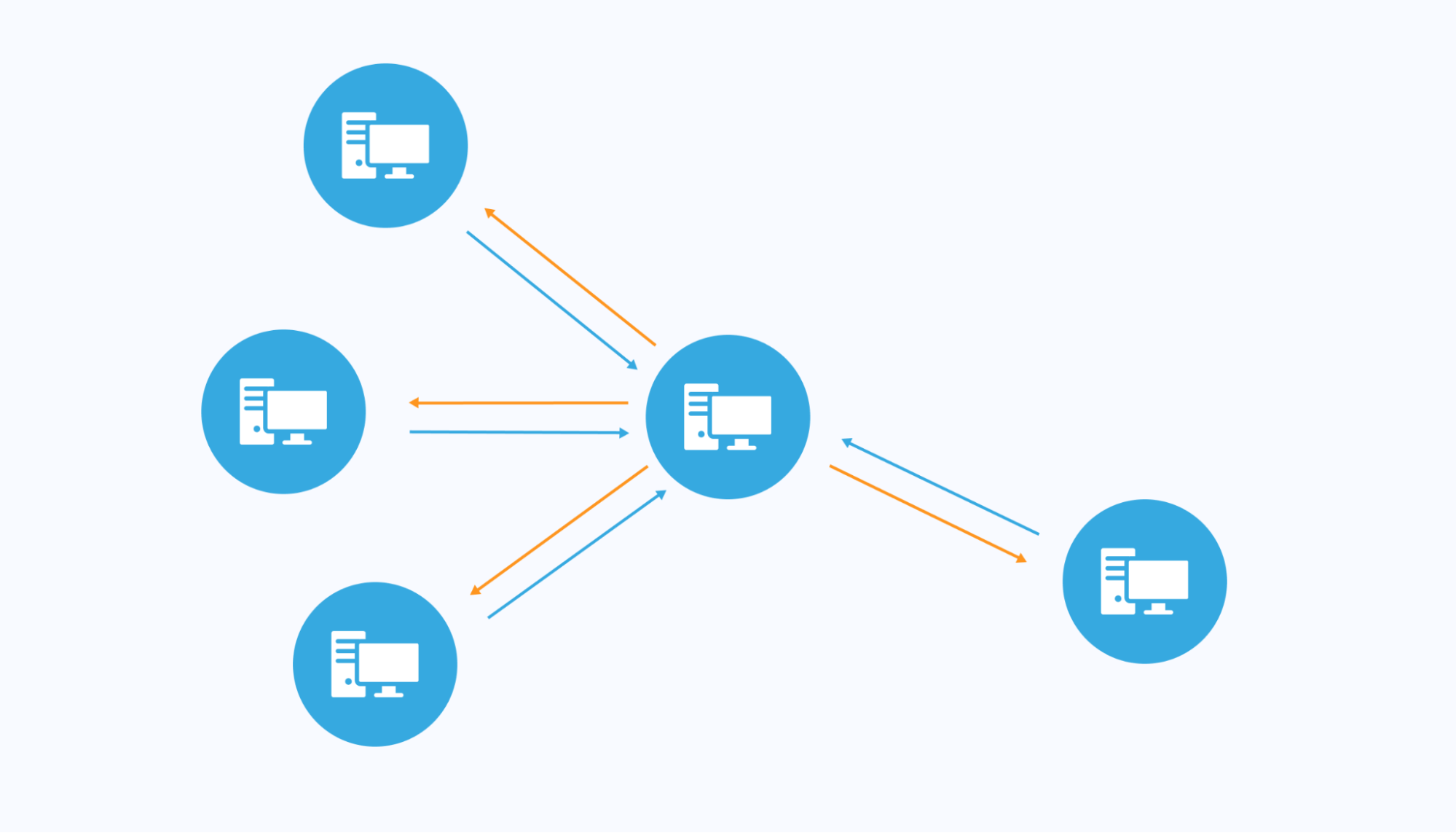 If you use a P2P VPN, you’ll be able to enjoy the convenience of peer-to-peer networks while keeping your personal information secure.

When you connect to the Internet via a VPN, your data traffic is routed through VPN servers, rather than your own. A torrent VPN masks your IP address and lets you use one from just about any country in the world.

This means that if someone were to snoop, they wouldn’t see your true IP address. If it were a cybercriminal, they would have no way of tracking your location.

When it comes to P2P traffic, a VPN will make sure no other peers can see your personal information.

Finally, if your ISP notices you’re frequently torrenting, some of them have been known to throttle your bandwidth, limiting your speeds. This is a way for them to curb how much you’re downloading to save them money and potentially deter illegal activity.

This service has dedicated P2P file-sharing networks that keep you secure when using platforms like uTorrent or another torrent client. Plus, it keeps no logs of your activity.

You can check out our full ExpressVPN review for a more detailed look at this service.

No, not all VPNs have dedicated P2P servers, and not every VPN server can be used for torrenting.

There are hundreds of VPNs out there, some are free, and not all are made equal. A free VPN won’t keep you protected while torrenting, even if they have P2P servers.

Then there are VPNs without P2P-dedicated servers that still allow torrenting. These are okay options, but some may limit your download speed. They also might limit your bandwidth, which could be problematic if you’re torrenting large files.

A premium P2P VPN service, like NordVPN, is ideal for torrenting. Many VPNs slow your connection down when you connect through them, but the best VPN server will keep your speeds high, even when torrenting.

You can learn more in our full NordVPN review. 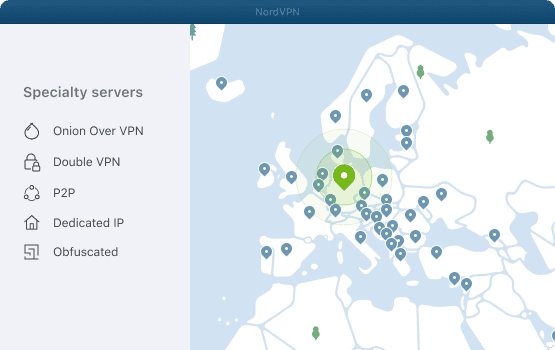 2. How do I find a good VPN for torrenting?

Despite bold marketing claims, many VPN service providers are too slow for torrenting and won’t keep your private information safe.

When you’re looking for a VPN for BitTorrent, you want a combination of security and speed. We reviewed many VPNs and found that a lot of them — especially the free VPNs — experienced DNS leaks. That means our real IP address was exposed, even when connecting through a VPN.

When looking for a good VPN for torrenting, pick one with many positive user reviews. Users love SurfShark, and in our tests, we found it to be one of the best options at its price point.

One reason we love it is its MultiHop feature. It runs your connection through two different servers rather than one, making it even harder for cyber threats or government agencies to track you. Read more about it in our SurfShark review.

Ultimately, your choice will depend on what features you’re looking for, your price point, and where you are in the world. Check out our top VPNs — you can’t go wrong with any of them.

No, torrenting itself is not illegal. However, it’s easy to get caught up in illegal activity, as it’s not always clear what torrents are legal and which aren’t. And your country’s laws also affect what is and isn’t permitted.

In addition to that, your ISP also monitors to see whether you’re torrenting illegal files. ISPs are known to punish people by sending a warning letter and throttling your Internet speed to prevent you from downloading as much material as fast.

In severe cases, your ISP or a copyright troll may take legal action against you, although it’s rare. 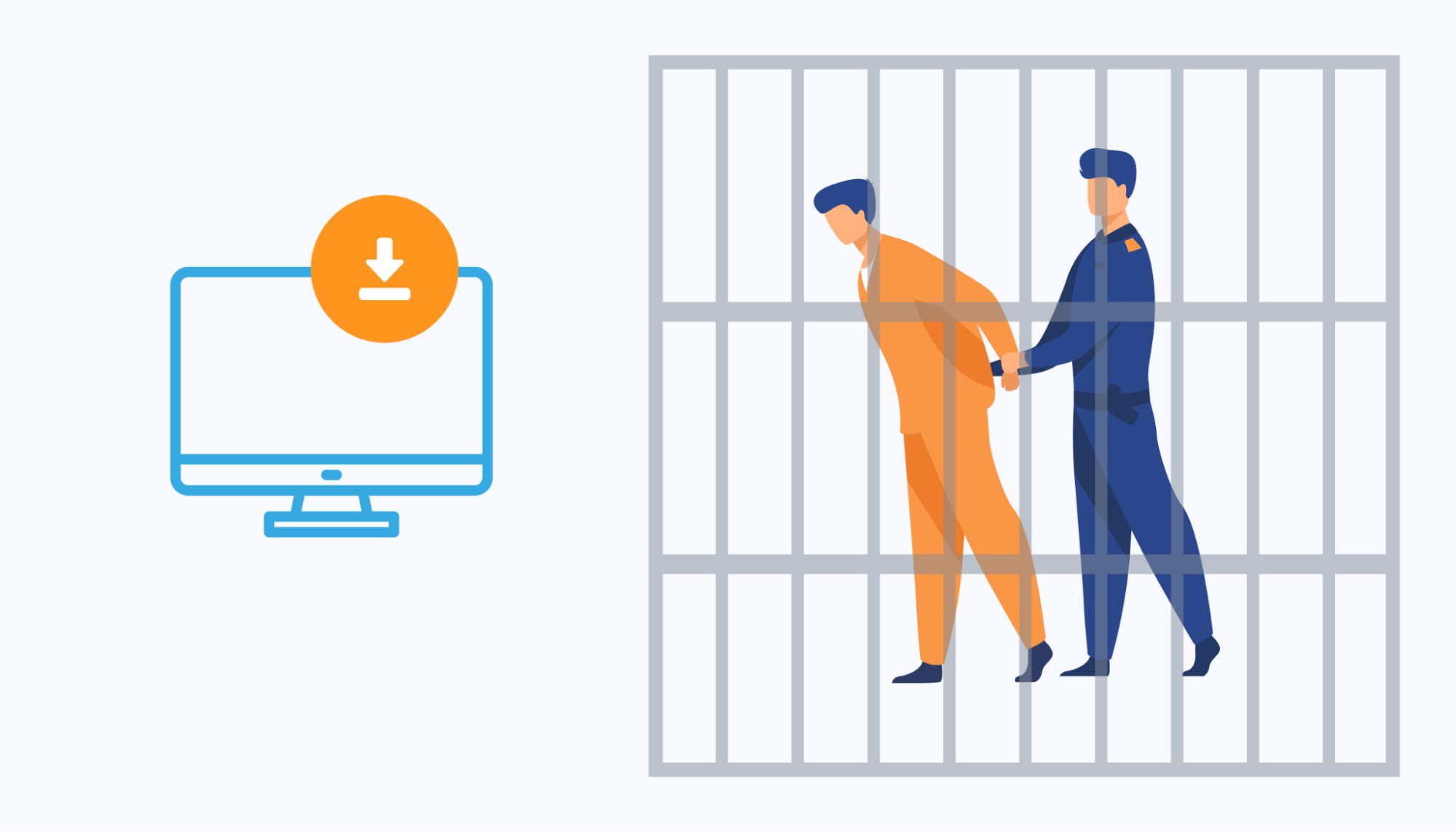 It’s recommended that you use a torrenting VPN when using P2P file sharing, even if you aren’t looking to download illegal material. It can be hard to determine what is and isn’t copyrighted, and some things exist in a gray area.

When picking a VPN, make sure it has a no-logs policy. This means it keeps no records of anything you do while using the VPN, including your traffic and what you’re downloading.

4. How do P2P VPNs protect your privacy while torrenting?

VPNs protect your privacy by masking your IP address.

When you do anything on the Internet, your IP address is exposed. It communicates where you’re accessing any website or torrent from. When you connect to a VPN service, you’re assigned a different IP address in whatever country you choose.

It’s almost impossible for cyber threats or your ISP to monitor your activity and see what you’re downloading when using a VPN. All your BitTorrent files are encrypted when they pass through the network, so no one will know you’re torrenting.

Some VPNs also have features like Double VPN or MultiHop, which route your connection through two servers for added protection.

Finding the right VPN for you

If you’re going to be P2P file sharing, even if you have no plans to download copyrighted material, it’s best to use a VPN.

Peer-to-peer networks can expose you to cyber threats, as it’s easy for malware to be passed back and forth in this way. And it also exposes your IP address, which can be used to find your location and monitor your online activity.

There are hundreds of VPNs on the market, but they won’t all keep you safe. A free VPN will slow your connection down, making it impossible to torrent. Others will expose you to DNS leaks, allowing hackers to see your true IP address.

Finding the right VPN can be a challenge. You can take a look at our VPN reviews to find the right one for you.

What is a P2P VPN, and how does it work?