Home > Blog > What is double VPN? What it means and why it matters

What is double VPN? What it means and why it matters

What is a double VPN (Virtual Private Network)? A double VPN connects your computer through two different private servers.

The name makes it sound like it’s twice as safe and secure as a “regular” VPN, but is that really the case?

If you’re still confused about what exactly it all means, you’re in luck, as we’re going to cover that in-depth in this post.

Learn exactly what a double VPN is, how it works, why you should care, whether it’s necessary for you, and which top VPN providers offer the option of a double VPN.

What is double VPN (or multi-hop VPN)? And how does it work

Double VPN, also known as multi-hop, is a VPN security feature that routes your web traffic, not through one secure server, but two. 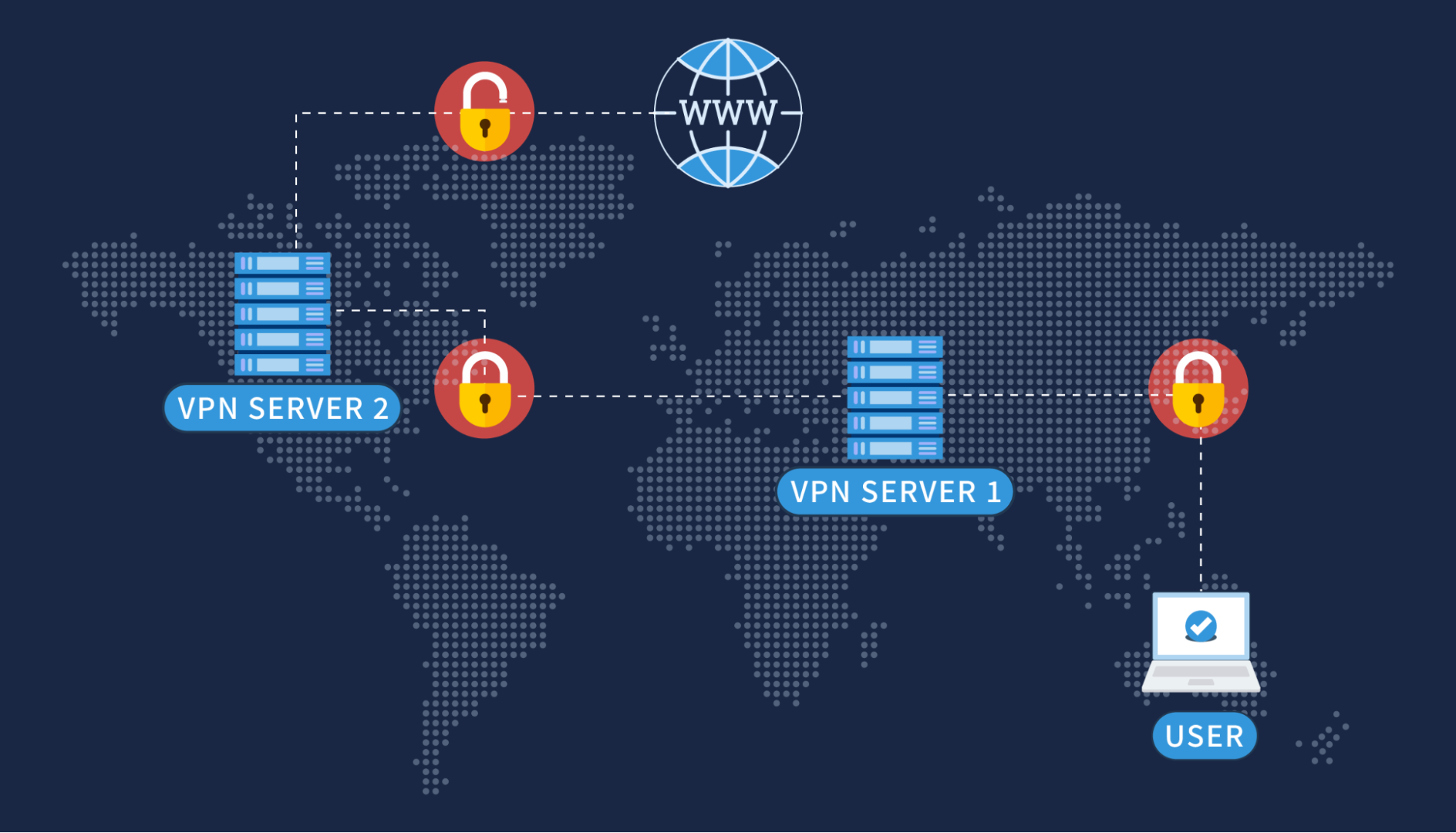 With a regular VPN, you connect to the internet through an intermediary server. The connection is encrypted, so your ISP can only see that you’re transferring data to and from a VPN, not what you’re doing online.

With a double VPN, you add an extra layer of encryption by adding another server to that connection. So instead of directly connecting to the internet via a VPN, there’s now another server in between — an extra degree of separation.

That means the second server that does the accessing of actual website (or peer-to-peer) traffic doesn’t know your original IP address.

Essentially, even the VPN providers involved in the connection can’t see or log (which they typically don’t anyway) what you’re doing online.

Some VPN providers offer this as a specific feature, automatically routing your connection through two or more servers.

If your VPN doesn’t support this, you can also set it up by utilizing your router and a desktop VPN app separately. (We’ll explain more about this later.)

The benefits of using a double VPN 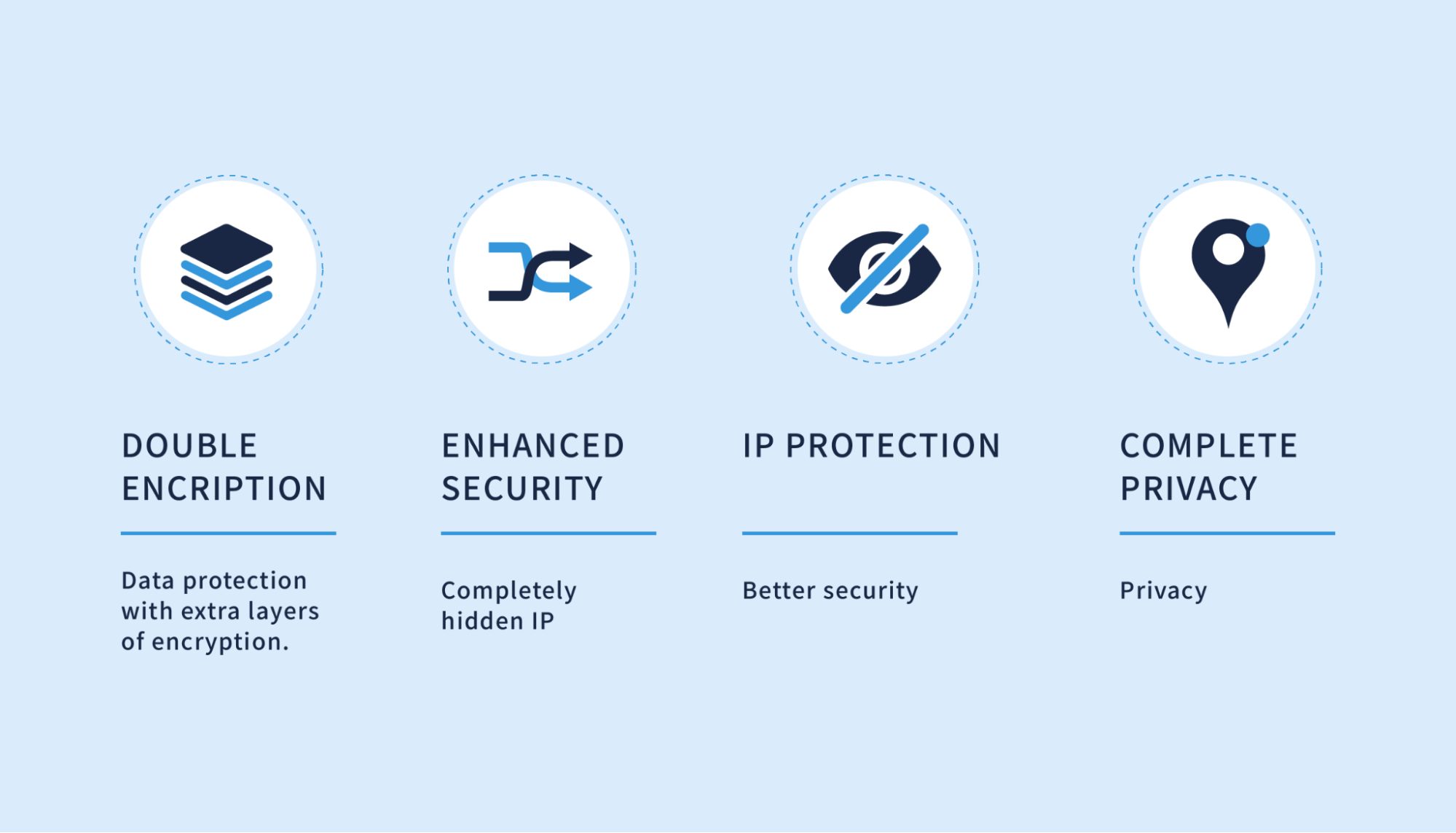 The main benefit of using a double VPN is an enhanced level of privacy and security. If you need to be as close to 100% anonymous as possible, it’s a great place to start.

Double VPNs provide you with:

Plus, you also get the benefits of a regular VPN, which include:

A regular VPN connection is already encrypted and secure. It’s a way to win back some privacy online.

A double VPN takes that to the extreme, almost completely covering your tracks online. But of course, it’s not all sunshine and rainbows.

There are some downsides to using a double VPN feature (or setting it up yourself).

Cons of using a double VPN

Of course, there are a few drawbacks to using a double VPN service, such as:

Since you are connecting to two servers (even if you use the setup from a VPN provider instead of configuring it yourself), the connection can be quite slow.

It makes sense, as you have to communicate with an extra server before reaching your final destination.

A double VPN is not a great option if all you want to do is unblock a website or your home country’s streaming content.

Can you set up your own double VPN?

Yes, it’s actually possible to set up a double VPN even if your VPN provider doesn’t offer the feature specifically.

You can do this by setting up one VPN server on your router and using another VPN on the computer level.

For example, you could have ExpressVPN set up on the router level and then use the Surfshark app on your computer.

This will also add two degrees of separation between you and the final website you visit. Plus, although most VPNs — at least the ones we recommend — don’t actively track your online activity, by doubling up, there would be no way for anyone to log the original IP address to its final destination.

The other option is setting up a virtual machine, then using one app on your computer and one VPN on the virtual machine. The end result is the same.

By using two providers, you protect yourself in case of operators working in bad faith.

For most people, is this a required level of anonymity and security, though? Not so much. Let’s take a look at who might need double VPN encryption and who can get away with using a regular VPN.

You only need a double VPN if you have a real reason to maintain your anonymity or protect the identity of someone with who you interact with.

Depending on the country you’re in and the cases you’re investigating, anonymity could be vital for journalists and their sources.

If you’re covering corruption in governments or large corporations, all the more so. In these cases, you may want to use a double VPN just to make sure that you leave absolutely no trace of your IP address that a private investigator or government contact could dig up.

Political activists may also want to take this precaution, depending on the political climate in their country.

People in countries with surveillance governments

If you live in a country where your government actively monitors what you do online, you may want to consider a double VPN.

For example, activists in Hong Kong have been arrested for social media activities alone. A double VPN can help you maintain your anonymity while communicating online. However, the ISP may pinpoint that you’re connected to a VPN, which in Russia, for example, is already illegal.

You don’t specifically need a double VPN to bypass the “great firewall of China.” You just need a reliable VPN provider that actively updates servers to bypass the IP blocking that China’s government brings down on all VPNs.

The third category of people that might want to use a double VPN is more of a “security hobbyist.” You may not need to be as anonymous as possible online, but you want to be.

We think that’s perfectly reasonable, and at the cost of two cups of Starbucks Coffee every month, it’s not really a big investment compared to some hobbies.

If you’re tired of big government and big tech acting like a big brother online, a double VPN will help you get their eyes off your back.

When you don’t need a double VPN

Let’s set one thing straight, most people who are reading this article probably don’t need a double VPN. Here are some cases in which a double VPN might be nice to have but is in no way necessary.

A regular VPN connection is already more than secure and private enough.

Even if you’re in another location, a reliable VPN with plenty of servers will be enough. If you like to stream in HD, you may want to use ExpressVPN, the fastest VPN we’ve tested.

It’s also one of the few VPNs that reliably unblocks Netflix for U.S. servers. Read more about its pros and cons in our ExpressVPN review.

A single-layer VPN already hides the fact that you’re torrenting from any nosy ISP or government.

So in virtually all cases, using a double VPN for P2P downloading/sharing (torrenting) is unnecessary.

Many VPN providers actually offer a specialized VPN server for torrenting. This dedicated P2P VPN server is usually preferable in terms of speed.

Your IP address and activities are already hidden from all interested third parties with a single-layer VPN.

If you want more information about staying safe out there, read our guide on how to torrent safely.

TOR is a browser that uses a unique approach to let people browse the internet privately — it randomly connects users via other users as intermediary servers. 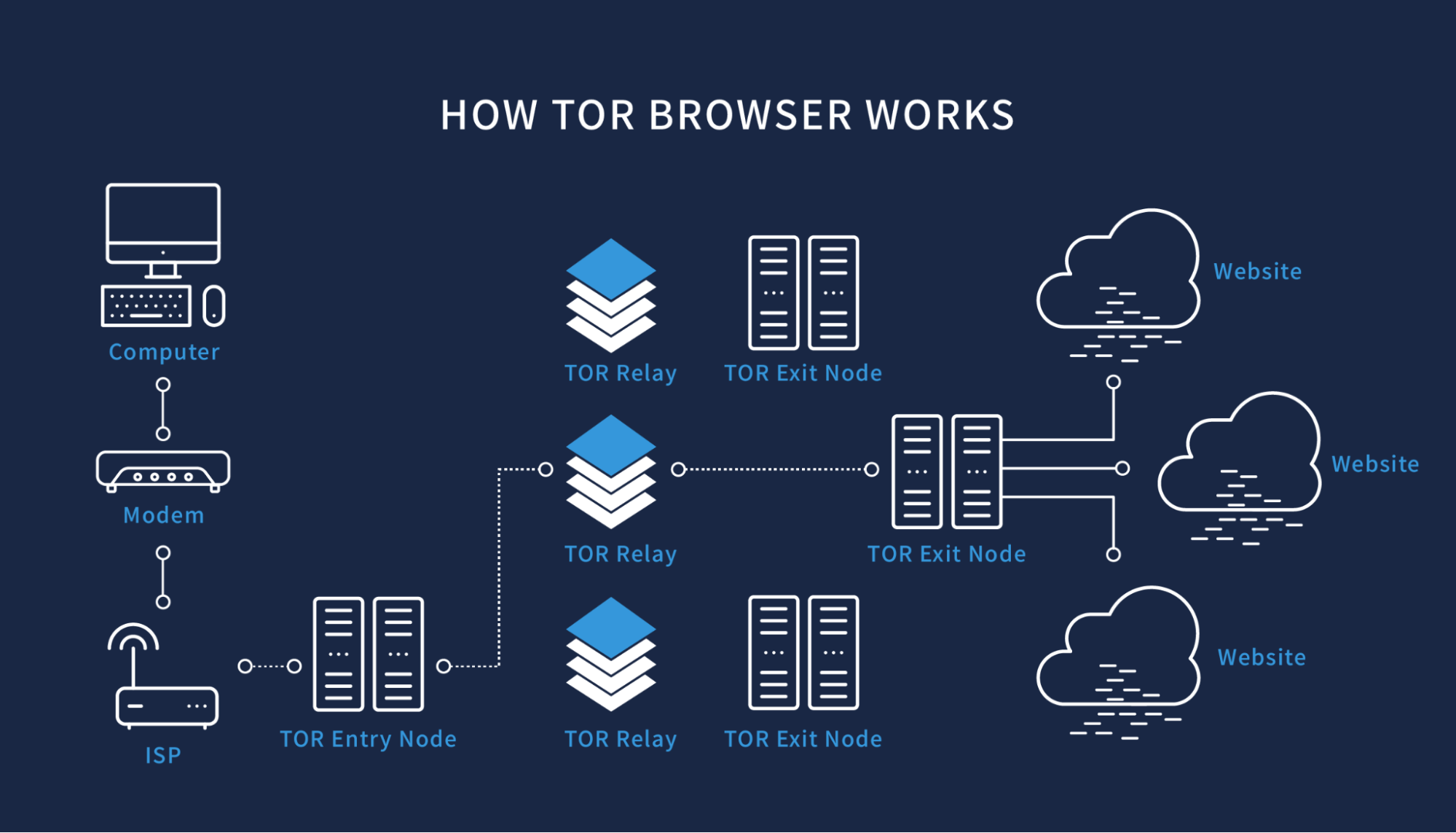 For most people, just using a single VPN or TOR is more than enough security. But using a combination of VPN and TOR (or a double VPN) can completely hide your activities and identity.

Even the VPN server handling the traffic for you won’t know what you’re doing online, except connecting to someone else’s computer.

If you care about privacy, this is an alternative to using a double VPN without paying for two providers.

If you want to implement a double VPN without having to pay for two VPN subscriptions, the best option is a provider that offers a double VPN or multi-hop server, specifically.

(Technically, you could also set up two different servers, one on the router and one on the computer.)

NordVPN is maybe the fastest growing VPN service on the market, and it now offers a dedicated double VPN feature.

You can select it from the server list when making your connection, and it will automatically select two suitable servers to route your connection through. 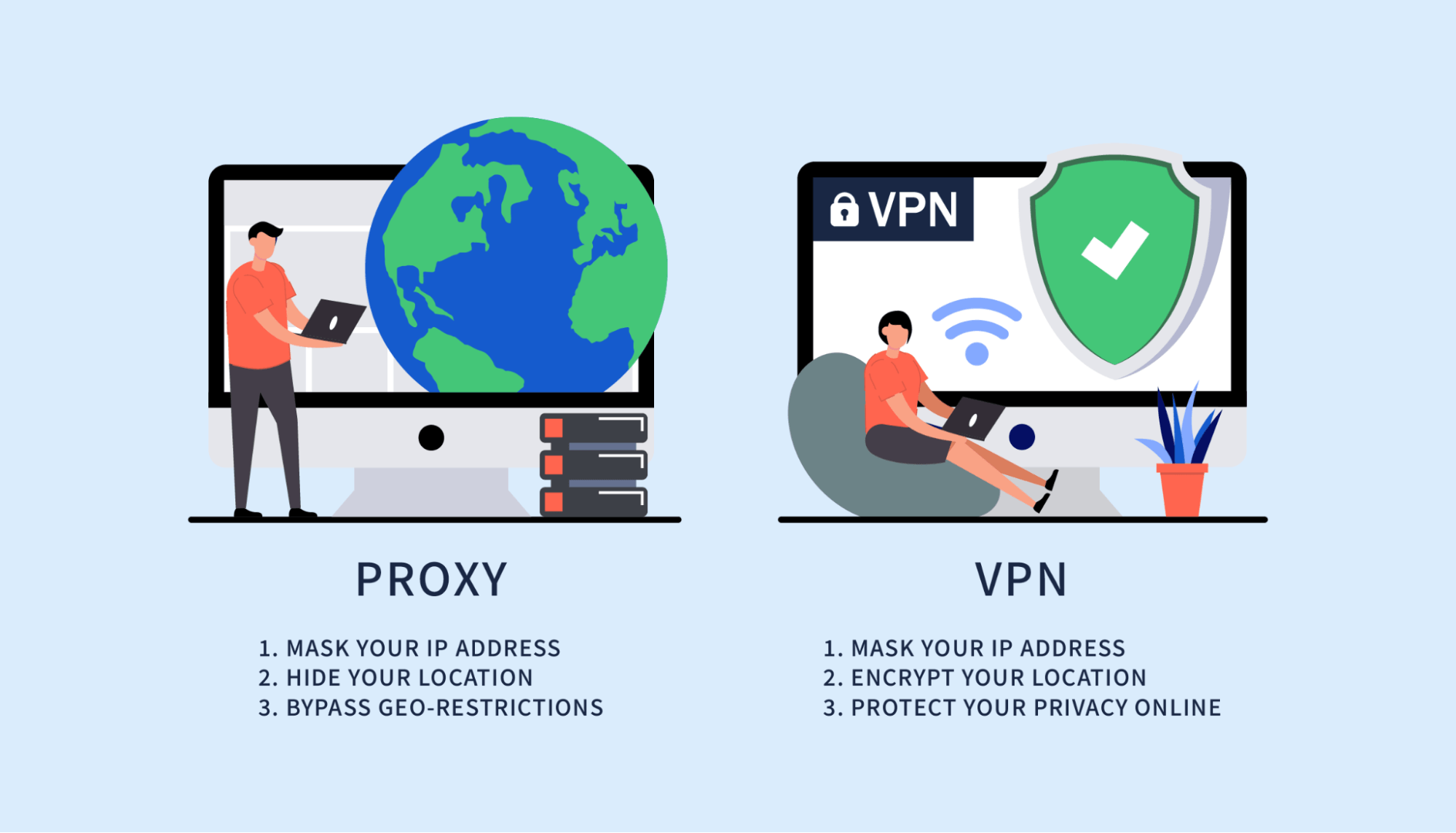 Beyond the double VPN connection, NordVPN offers fast, reliable connection speeds, a native VPN app for most devices, and more.

Read our NordVPN review for more information about the pros and cons of using the provider.

Surfshark also offers a double or multihop VPN feature without having to set it all up manually. All you need to do is select the multihop server when setting up your VPN connection, and you’re good to go.

If you configured this connection on your router and then used a second VPN server on your computer, you could technically set up a triple VPN — good luck to anyone wanting to track your internet traffic.

Beyond this feature, Surfshark is an affordable, robust VPN that’s fast, reliable, and easy to use.

Otherwise, we wouldn’t be recommending it to you. Read more about the pros and cons of using it in our Surfshark review.

In most countries, unless you’re an activist, journalist, or undercover police officer, using a double VPN isn’t strictly necessary.

A regular VPN will hide your internet activities from your ISP, big tech companies, and your employers (if you browse at work).

But if you live in a country with strict government surveillance and you want more freedom online, a double VPN offers an extra level of protection.

Of course, you can never be too secure, so if it makes you feel more at ease, why not go for a VPN provider that offers this feature?

What is double VPN? What it means and why it matters