What Is a VPN Kill Switch, and Why Should You Care?

Wondering what a VPN kill switch is and whether you need one?

A VPN kill switch is a feature in VPNs that stops all unsecured traffic in the event that your connection to the VPN server drops.

If you’re handling sensitive data, the last thing you want is a breach of security. A VPN kill switch can help you avoid that.

In this article, we’ll cover exactly what a VPN kill switch is, how it works, whether it’s a must-have feature for you, and which major VPN vendors support the feature.

What is a VPN kill switch?

For example, the VPN server you’re connected to might experience unexpected downtime. When the VPN server goes down, by default, you’ll just connect back to the regular internet.

Instead, with a kill-switch, the VPN app stops all internet traffic to and from your computer the second the VPN connection drops.

How does a VPN kill switch work?

A VPN kill switch continually monitors your VPN connection, and the millisecond it notices a disconnect or error, it shuts down all internet traffic.

This means that your computer doesn’t have time to send or receive any sensitive data on an unprotected connection. 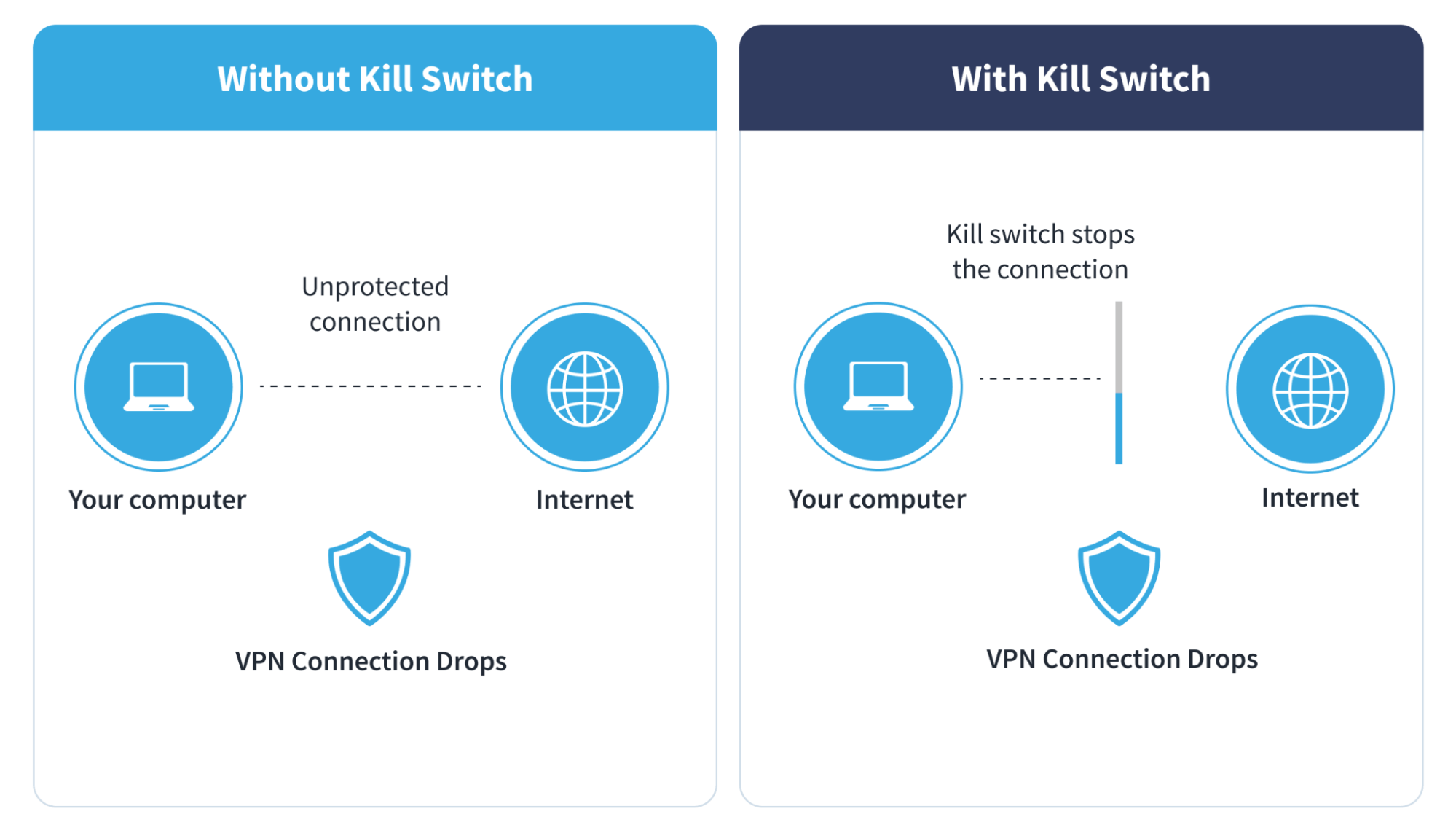 The kill switch achieves this with a 4-stage process:

The kill switch isn’t some big red button you need to switch on or off yourself. It’s an automated script that keeps you safe whether you notice a problem or not.

What that means for you, is that you can rest easy knowing that everything you do online is always protected

Why do you need a VPN kill switch?

Everyone considering getting a VPN service needs the kill switch feature because it protects the integrity of your data and connection.

The second something happens that could have caused an IP leak or worse, the kill switch shuts that all down, and you’re safe.

In effect, it stops your computer from doing what it’d normally do when a VPN connection drops — going back to a regular internet connection.

To learn more about exactly what kind of information could get through, read our answer to the FAQ: What does a VPN hide?

Without a kill switch, you could be unlucky and lose that extra level of privacy and protection exactly when you need it the most.

So if the reason you use a VPN in the first place is that you care about online privacy and security, a kill switch is a must-have feature in your VPN.

But there’s good news — essentially every worthwhile VPN service provider offers a kill switch in 2021. Later in this article, we’ll even share our top five choices that include the feature.

But before we break down your options, let’s talk about the different types of kill switches on the market.

There are two levels of VPN kill switch available, system-wide or app-specific, depending on whether it shuts down all traffic, or only blocks unprotected traffic for specific apps and programs.

A system-wide kill protects all data going in and out of your computer because it shuts down all app traffic without discrimination.

This is what ExpressVPN’s kill switch feature “Network Lock” looks like in the desktop application. 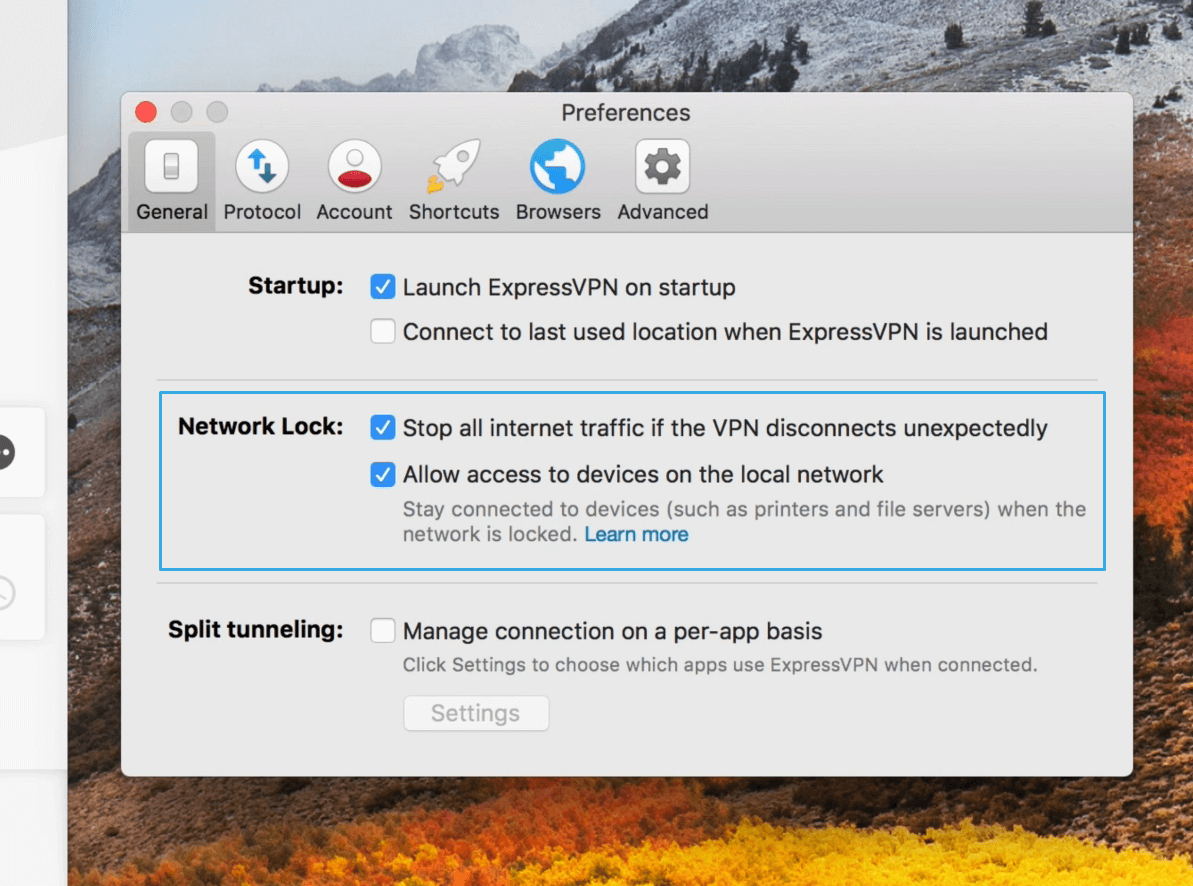 It’s an example of a system-wide kill switch. It stops the internet connection of all your apps and programs until the VPN connection is back online.

If you don’t want to be stuck buffering your favorite show, some VPN providers offer an app-specific kill switch.

An app-specific kill switch will only shut down the unprotected connection of specific apps and programs.

For example, you should always protect any torrenting data or web browsing activity from prying eyes.

One example of an app-specific kill switch is the “app kill” feature from NordVPN. You can select specific apps that you want no data leaks from, for example, BitTorrent. 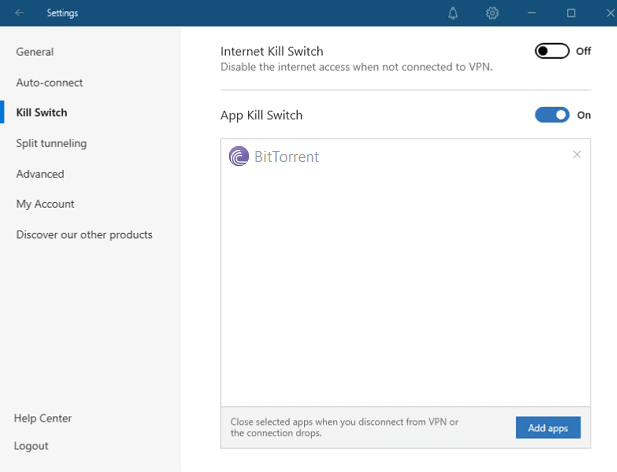 That way, you can still watch your favorite shows or play your favorite game uninterrupted, even if a VPN connection drops momentarily.

Next up, we’ll cover some of the best VPN providers on the market who also offer the kill switch feature.

Below, you’ll find five of our top picks for VPNs with kill switch functionality. Every VPN provider on the list offers at least a system-level kill switch for their desktop app. 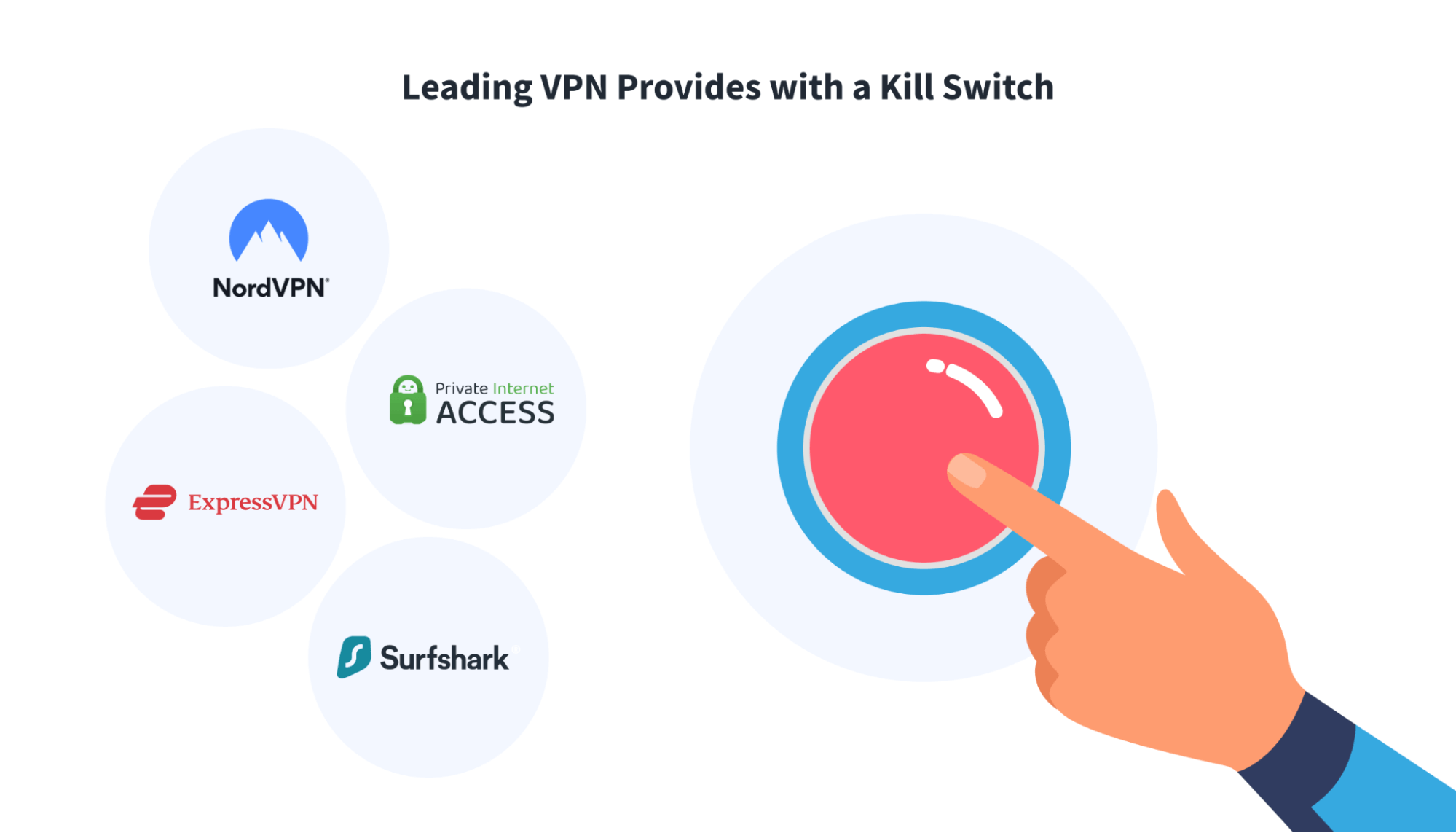 NordVPN is one of the few providers that offers not just a system-wide option, but also a kill switch for specific apps.

If you want to secure data to and from a specific app while maintaining a connection for games or streaming content, NordVPN is a great option.

Not only that, but it’s also one of our favorite VPNs, with stellar scores in security, privacy, reliability, features, and speed.

For more information about exactly why we like NordVPN so much, you can read our full-length NordVPN review.

ExpressVPN is a leading VPN provider that offers a kill switch and other advanced features like split tunneling with its basic plan.

While it offers no app-specified kill switch, you can use split-tunneling to make sure you’ve always got a fast and reliable — though unprotected — connection in the apps of your choice.

By setting up your VPN on your router, you don’t need to worry about the safety of your connection on any device.

With unbeaten speeds, native apps for all devices, and thousands of servers, ExpressVPN is our top VPN of 2021. Read our ExpressVPN review for more information.

Surfshark is another VPN that offers a kill switch for any connection in a VPN tunnel. It’ll prevent an IP leak and keep all your data safe from prying eyes 24/7.

In terms of overall features, price, security, and the reliability of the connection, Surfshark is our #2 choice. Check out our Surfshark review to find out what makes it stand out from the crowd.

Private Internet Access is another top VPN service that offers a kill switch on multiple operating systems and devices.

And it’s not the only security feature that PIA offers. With AES 256-bit encryption (the same used by large companies and banks) for all connections, your data is completely safe.

It also offers servers with the new WireGuard VPN protocol — a new more efficient protocol for securely transferring VPN data over the internet.

CyberGhost also offers a kill switch in its VPN software for a variety of devices. It’s a great VPN with fast speeds, good security procedures, and an iron-clad privacy policy.

It even has the option to set up a dedicated IP address, just for you.

Hopefully, you now have a better understanding of what a kill switch is and why it’s a necessary feature for most VPN users.

Even if you’re only using a VPN to circumvent geoblocking, with a kill switch, there’s no risk of the company discovering you’re using a VPN because the connection drops.

The good news is that most leading VPN providers have started to offer this feature, which means it’s not likely to be the deal-breaker in your search for the best VPN out there.

If you want the ability to stop all unsecured traffic before it happens, along with a fast and reliable VPN connection and cutting-edge features, ExpressVPN is the obvious choice.

What Is a VPN Kill Switch, and Why Should You Care?