Home > Blog > ExpressVPN vs NordVPN: Which Popular VPN Comes Out On Top?

ExpressVPN vs NordVPN: Which Popular VPN Comes Out On Top?

When you search for VPNs, ExpressVPN and NordVPN are at the top of every list.

These providers often lead the pack in “best 10” lists because of their comprehensive features and great user experience.

They’re fast and secure, plus they unblock major streaming platforms and protect sensitive user data. So, with such evenly matched services, how can you decide which one is right for you?

In this article, we put the two VPN industry titans against each other in a face-to-face comparison. We explored their features, pricing, and performance to see which one truly rules them all.

If you want more in-depth information on each provider’s features, check out our individual NordVPN and ExpressVPN review.

This analysis will review these two based on a few key elements:

Privacy: Do ExpressVPN or NordVPN keep logs of your activity?

When it comes to privacy, you want a VPN client that does not store any activity or connection logs. A provider that stores logs will have to hand them over if they’re requested by your Internet Service Provider (ISP) or the government. They could also sell your data to third-party marketing and advertising services. 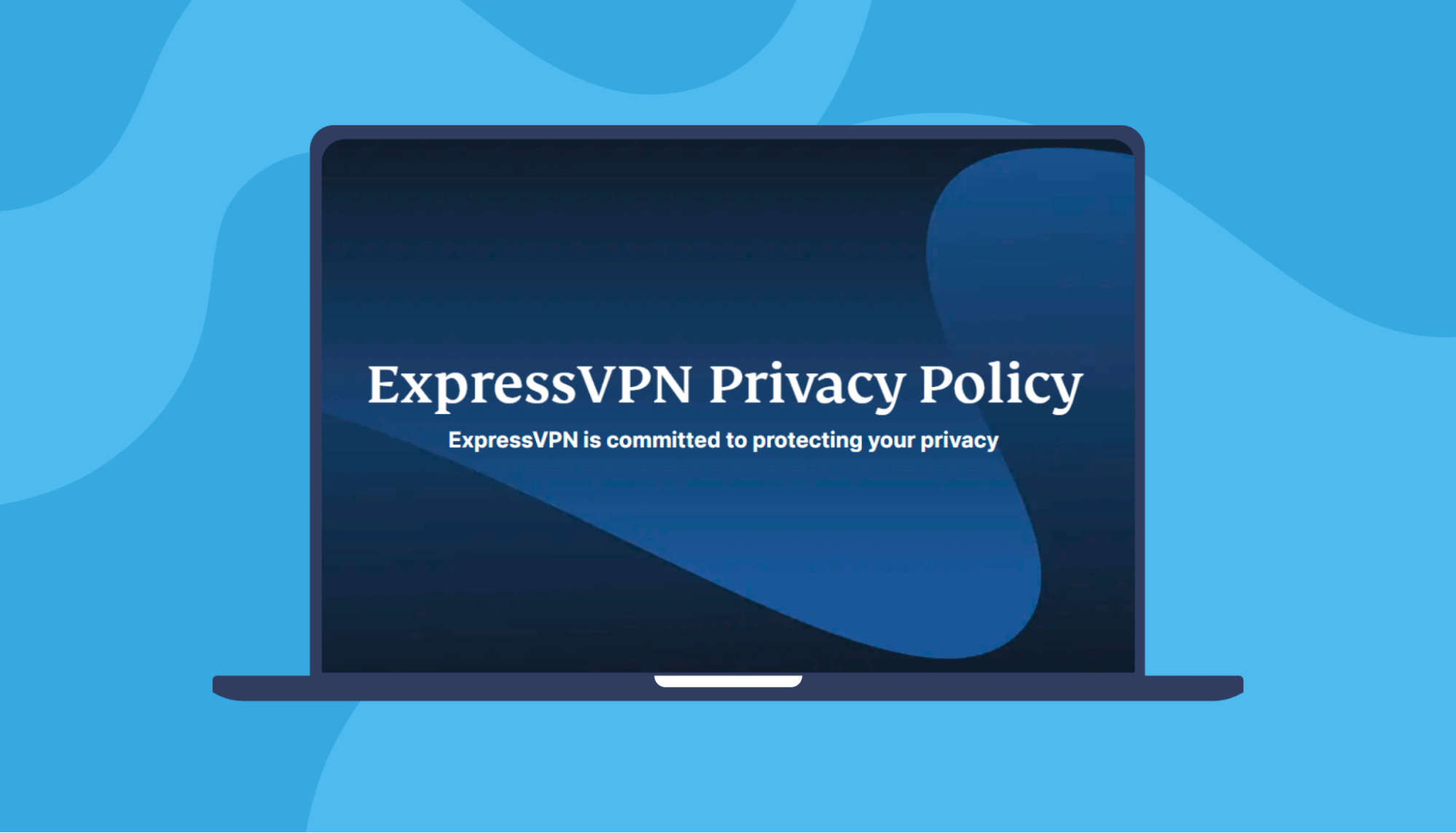 ExpressVPN does not store any logs of what you’re doing online. Its no-logs policy was even proven in court.

In 2017, Turkish authorities seized an ExpressVPN server for an ongoing investigation. However, authorities found no information about the online activities of its users.

ExpressVPN’s headquarters is in the British Virgin Islands, where there are no mandatory data retention laws.

NordVPN does not store any logs either and has an equally strict no-logs policy.

NordVPN’s headquarters are in Panama, where there are also no mandatory data retention laws.

Both NordVPN and ExpressVPN are equally secure. They don’t store any logs of your online activity and are based in countries that do not fall under the jurisdiction of the Five Eyes or 14 Eyes surveillance alliances. These intelligence alliances allow nations (including the US and UK) to monitor citizens’ online data.

Speed: Which provider is faster, ExpressVPN or NordVPN?

Speed is one of the primary factors when it comes to choosing a VPN. A good VPN provider does not hinder your upload or download speeds significantly. Slow internet speed leads to interruptions while streaming, gaming, browsing, and torrenting.

Both ExpressVPN and NordVPN claim to be the fastest VPN on the market. But, our tests showed that ExpressVPN is faster.

NordVPN has been the king of the mountain when it comes to speed tests in recent years, thanks to its NordLynx protocol.

This protocol is based on the WireGuard tunneling protocol. It uses NordVPN’s proprietary double NAT (Network Address Translation) system to offer ultra-fast speeds and superb security.

In our speed test, we hit 64.4 Mbps download speeds and 25 Mbps upload speeds with the VPN off. When connected to NordVPN, these dropped to 48.5 Mbps and 17.7 Mbps, respectively. 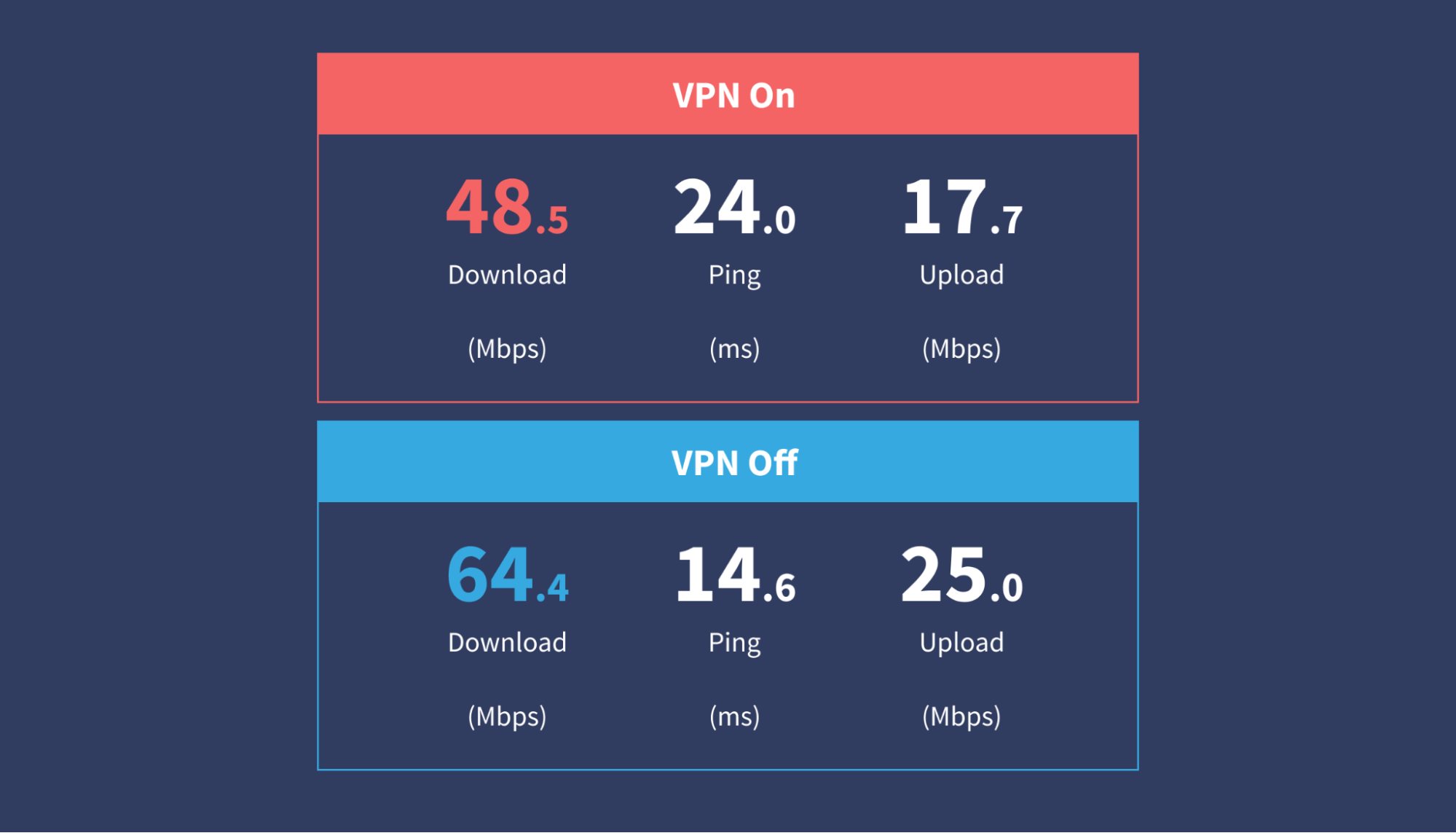 ExpressVPN is the fastest VPN in the industry, largely because of its custom Lightway protocol, which the company built from scratch.

The protocol is lightweight, provides superior connection speeds on every device, and improves security.

Before connecting to the VPN server, we recorded 64.4 Mbps download speed, and 25 Mbps upload speed. 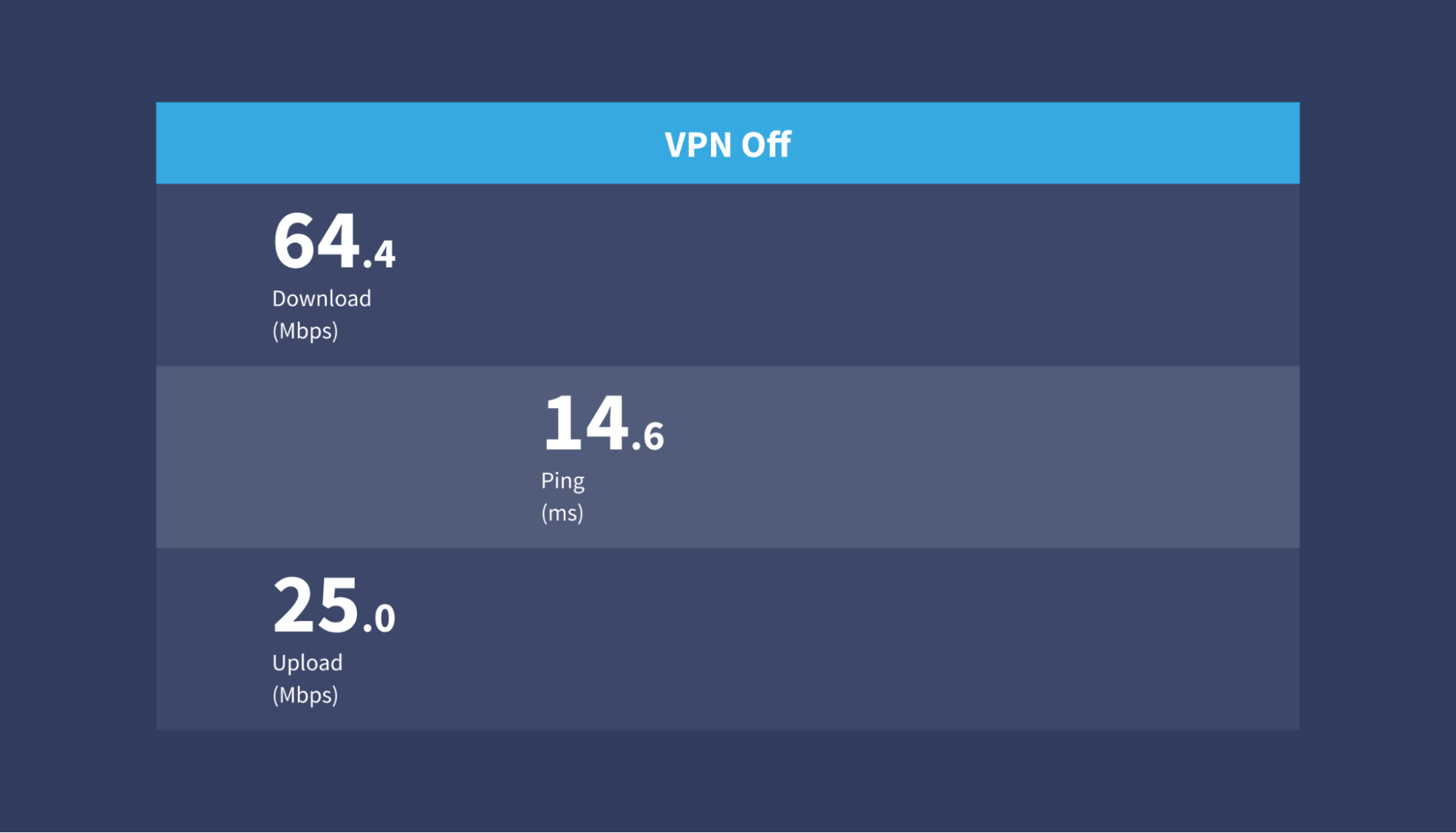 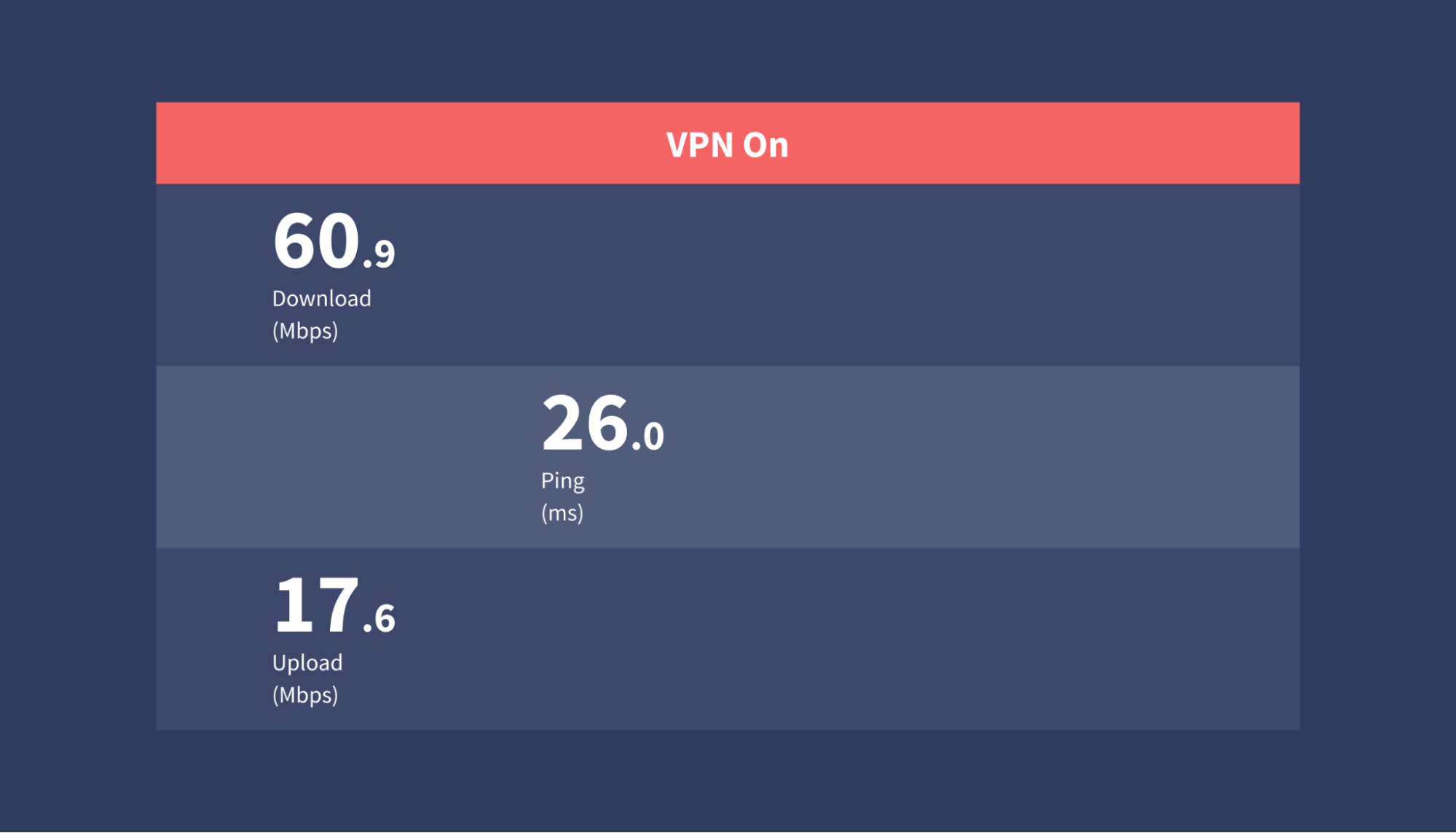 Overall, ExpressVPN is the fastest VPN that we’ve ever tested.

Security: Can ExpressVPN and NordVPN secure your connection?

One of the primary uses of a VPN is to secure your internet connection. A VPN needs security features that hide your location, IP address, identity, and information.

As expected from industry leaders, both ExpressVPN and NordVPN offer:

Let’s take a look at the unique security features that each provider offers:

ExpressVPN uses TrustedServer technology on all its 3,000+ servers to secure your data. This means that all of its servers are RAM-only and never store your information permanently.

Traditional servers store data on hard drives until they are erased or written over. So anyone that hacks into the server or seizes it before it’s erased can access the user information stored on it. 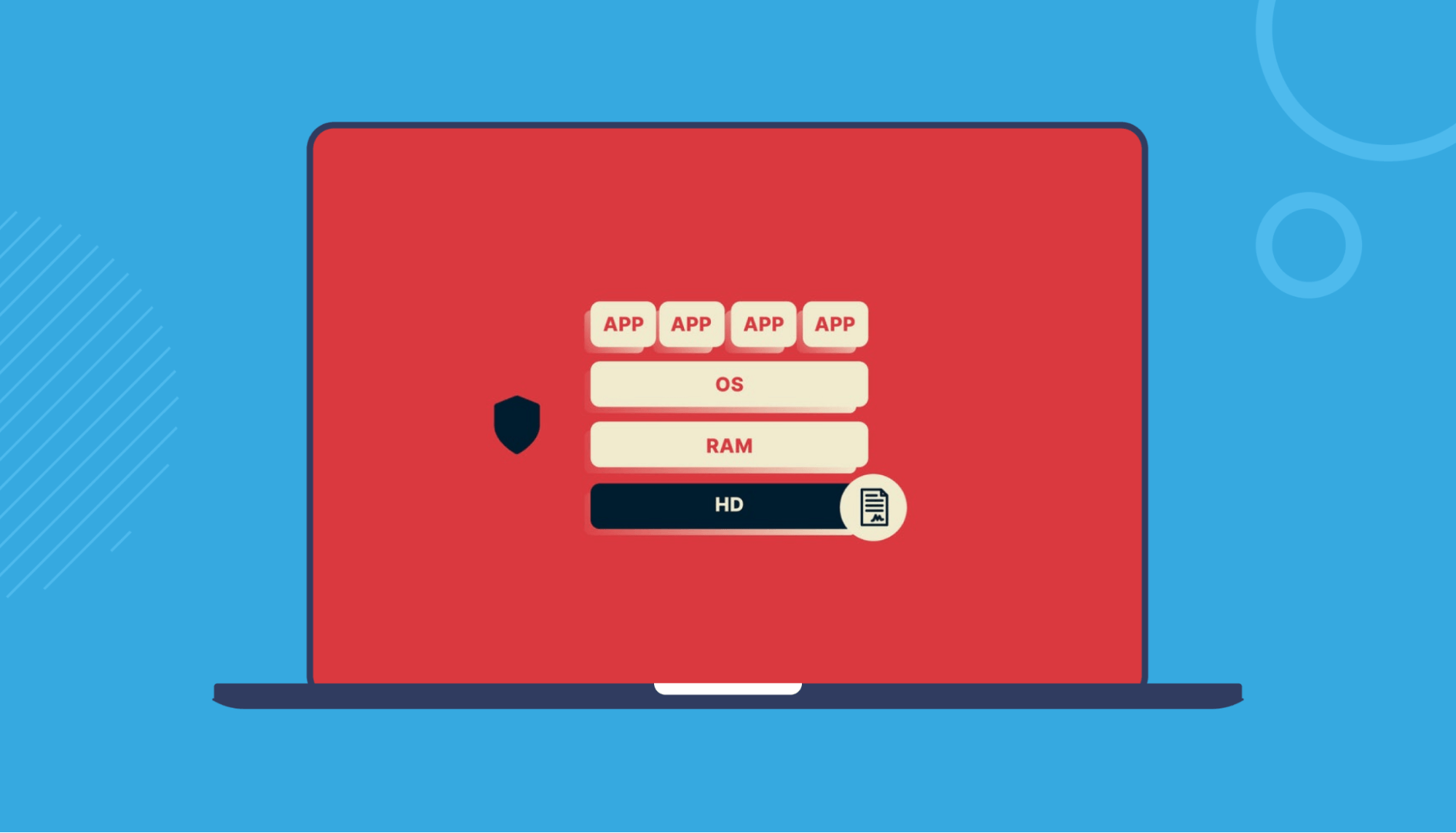 With ExpressVPN’s TrustedServer technology, nothing is stored permanently. All data is wiped with every reboot, and the entire software stack is reinstalled. These measures significantly boost data security.

ExpressVPN also runs its own private encrypted DNS on every server. A DNS or Domain Name System translates domain names (aka the names of websites or webpages) into IP addresses that your browser uses to load websites.

So if someone can access your DNS requests, they can see what webpages you’re visiting. This is why you need an encrypted DNS server. It protects your DNS requests and eliminates the risk of them being exposed to third parties

NordVPN offers 5,251 servers. All of which are obfuscated. This means that they rearrange your data packers so that your ISP and firewalls cannot detect that you’re using a VPN. 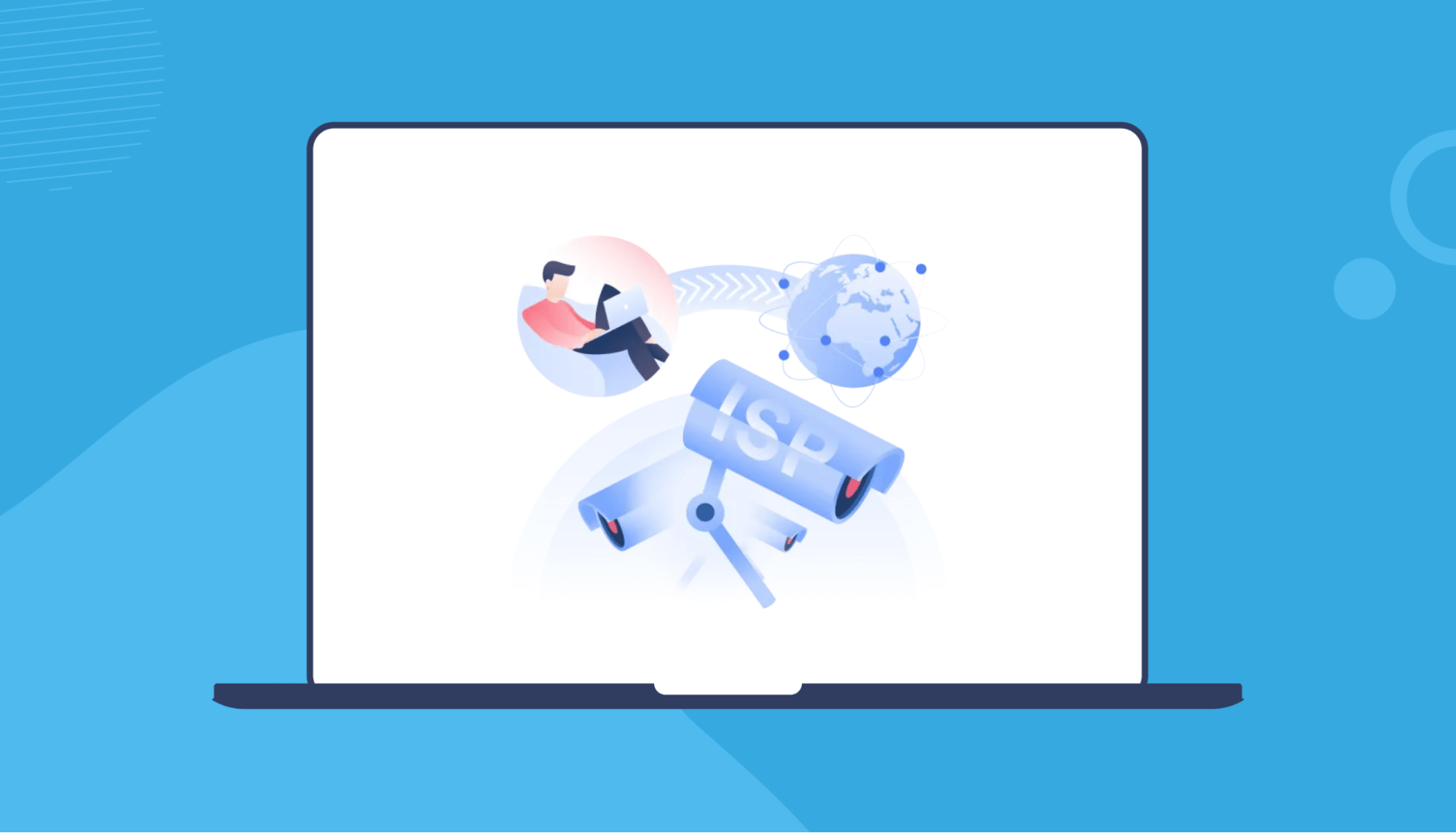 Typically, your ISP and firewalls know that you are connecting via VPN service or proxy and can block your access to specific websites and content.

With an obfuscated server, no one knows that you’re using a VPN and thus cannot block your connection. There’s also a second layer of encryption on top of your already encrypted VPN connection.

NordVPN also offers Double VPN, where you can change your IP twice for further protection.

If you’re using an Onion router to maintain your online anonymity, you can use NordVPN’s Onion Over VPN. This feature lets you stay anonymous by using the Onion router but get better security via AES-256 encryption.

Both ExpressVPN and NordVPN offer best-in-class security features via advanced server technology and custom connection protocols. The providers employ the gold standard of encryption protocols and use a kill switch to protect your data at all times.

Having said that, ExpressVPN is the more secure option thanks to its unique TrustedServer technology, which never stores your data, and its privately run DNS servers. ExpressVPN also offers split tunneling support on more platforms (Windows, Mac, Android, and Routers) compared to NordVPN (Android and Windows).

So, if you’re in the US and want to watch a show that’s exclusive to the UK Netflix library, you’ll need a VPN service provider.

ExpressVPN and NordVPN are excellent at accessing geo-blocked content on every major streaming site.

When it comes to streaming, you can rely on ExpressVPN and NordVPN equally.

China: Can ExpressVPN and NordVPN bypass the Great Firewall?

China has restrictive internet regulations set by its government. This never-ending list of restrictions is known as the Great Firewall.

To further regulate content, China has blocked most VPNs. So, even if you get a VPN, it probably won’t work.

ExpressVPN and NordVPN are among the rare VPN providers that actually work within China’s borders. They’re considered the best VPNs for countries with restricted internet access.

NordVPN uses obfuscated servers and a dedicated app to work in China and other restricted areas.

ExpressVPN has no server locations in China and is thus not under the nation’s jurisdiction. Moreover, the provider uses AES-256 encryption protocol, and a kill switch to secure your connection. The provider also constantly monitors their availability in China and provides up-to-date troubleshooting guides for users in the region.

Plans and pricing: Are ExpressVPN and NordVPN easy on your wallet?

When you’re picking a VPN, the price can be a big factor. No matter which VPN you choose, you want your money’s worth. Here’s how ExpressVPN and NordVPN stack up.

As the industry leader, ExpressVPN costs slightly more than most other VPN services. But it offers advanced features that are worth the price. Remember that you’re getting access to features that no other VPN provides. 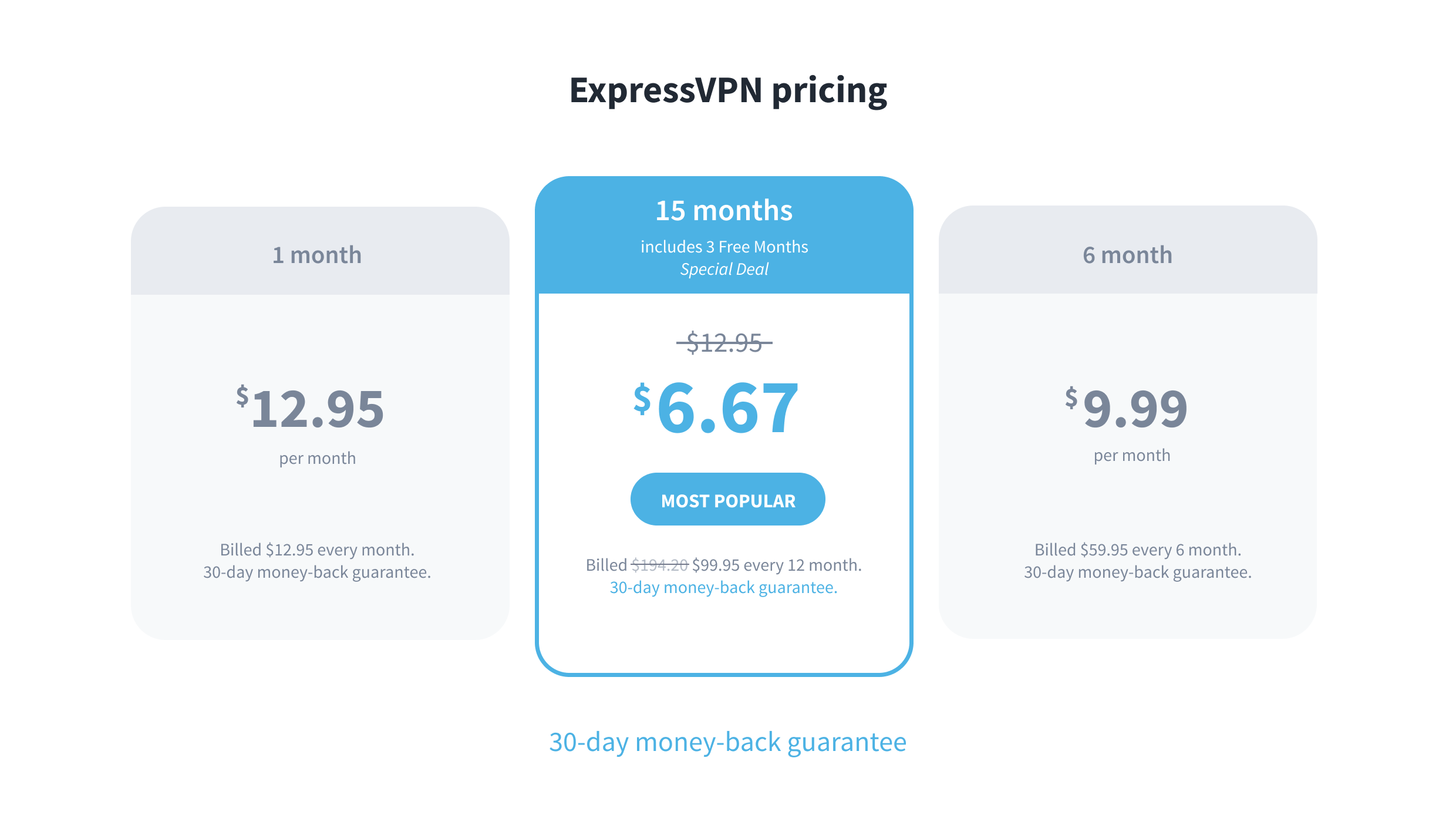 Its monthly plan starts at $12.95 per month if you’re only looking to test it out on a month-to-month basis.

You can also choose its six-month plan for $9.99 per month. The longer your plan, the lesser you pay. ExpressVPN’s best plan is the 15-month option, costing $6.67 per month and offering three months free.

All plans come with a 30-day money-back guarantee. You’ll be able to access the ExpressVPN app on Windows, macOS, iOS, and Android, along with a browser extension. You can even set up an ExpressVPN connection on your router, protecting every device connected to it.

NordVPN is more affordable than ExpressVPN. If you’re just getting started, you can choose the monthly plan for $11.99 per month to see if it’s the right fit.

You can also opt for the annual plan at $4.99 per month or the two-year plan at $3.29 per month. Plus, you can stay updated about the latest promos and tips on how you can get the best NordVPN deals.

NordVPN also offers a 30-day money-back guarantee and accepts payments via Bitcoin. You can use the NordVPN app on your desktop or use its apps on iOS or Android. 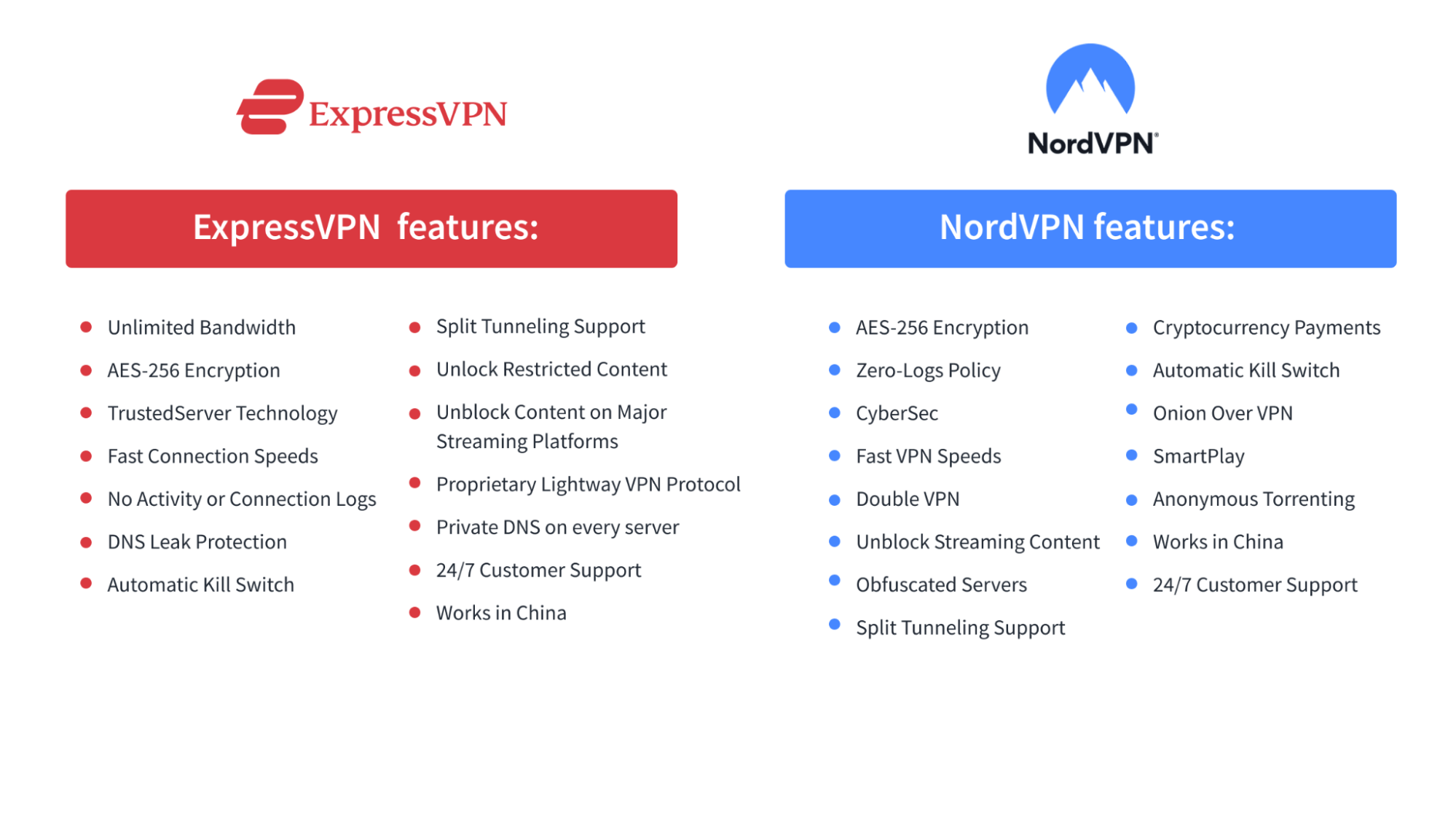 ExpressVPN comes out on top because it goes above and beyond industry standards. The Lightway protocol, advanced technology, and stringent privacy measures make it the ideal choice, just edging out NordVPN as the number one VPN in the world.

ExpressVPN and NordVPN lead the VPN market for a reason — they’re focused on privacy and security. While both providers offer prime features, it’s fair to say that ExpressVPN has a slight edge when it comes to privacy and performance.

If you want to know more, you can read our VPN blogs or read our reviews of VPN providers to find the right fit for your needs.

ExpressVPN vs NordVPN: Which Popular VPN Comes Out On Top?