The Best VPNs for Gaming

A large portion of the market uses VPNs for streaming, but they can also worthwhile for gamers.

The best VPNs for gaming can speed up your connection by bypassing bandwidth throttling. A VPN can also help you access games that aren’t available in your region.

Those are just two of the many benefits of a VPN.

In this article, we’ll dive deeper into why you may want to use a VPN for gaming, and we’ll highlight some of our top picks.

A virtual private network (VPN) is used to keep you anonymous and secure while you’re online.

It does this by masking your IP address and encrypting your data, making your online actions untraceable.

Your information (online activity, your location, what you download) is sent through an encrypted VPN tunnel that’s next to impossible to penetrate. This not only secures your data but also makes it appear as though you’re located wherever the server you’ve chosen is located.

It’s helpful in a couple of ways. First, it lets you access websites and content that would otherwise be restricted. For instance, a VPN can help you use a streaming service that’s only available in Canada from anywhere in the world.

A VPN also keeps your information private. It allows you to add an extra layer of protection to sensitive online activities, like banking. 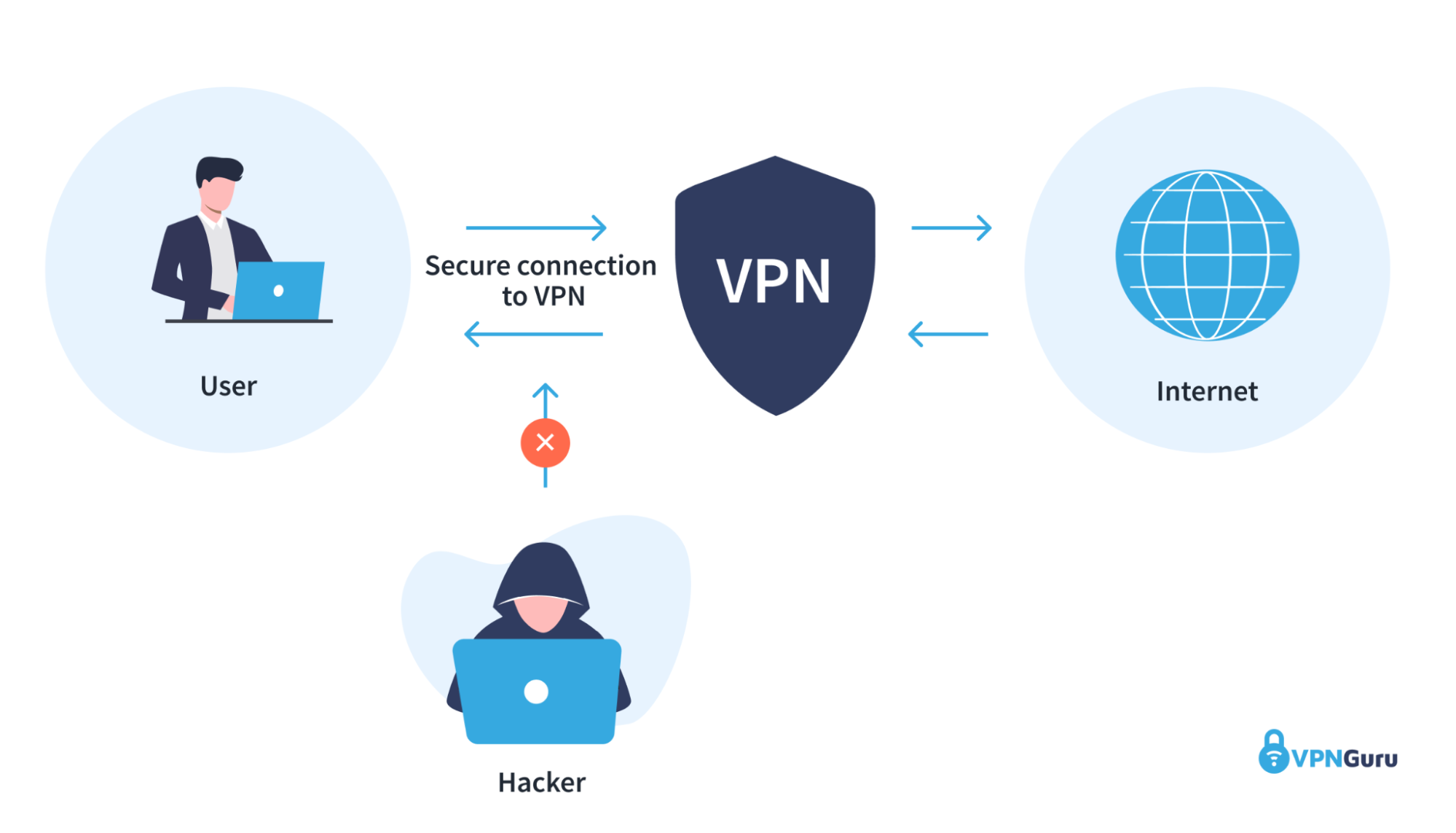 Why do I need a VPN for gaming?

There are a few reasons why a VPN for gaming is worth it.

The first is to protect yourself from malicious gamers. There are instances where players get angry enough (in online games) that they will actually go as far as to stalk another player. They could use your IP address to find your social media accounts and real-life location.

There’s also swatting. This is rare, but it has happened. A disgruntled gamer will report a bomb threat at another gamer’s location, and a SWAT team will show up.

Some other benefits include using a VPN to play games not available in your region, bypassing bandwidth throttling, and staying safe from DDoS attacks.

Why we don’t recommend free VPNs

There is no free VPN that we could recommend as a gaming VPN.

This is unfortunate because so many people rely on free VPNs, thinking that they provide adequate protection. A 2020 survey of 700 Americans found that about 68% of them have a VPN installed, and 29% use free VPNs.

Many free VPN services don’t properly encrypt your data, exposing you to DNS leaks and showing your IP address to anyone who does a little bit of digging.

Not only that, but some free VPNs embed trackers in their code. This goes against everything a VPN is supposed to do, and it’s usually done to sell your data to third parties.

Free VPNs often fail at unblocking content, whether that be Netflix or an online game that you’re dying to play.

Even downloading a free VPN to test it out can put you in harm’s way. Many of them are loaded with malware.

If one does happen to work for you, odds are it will reduce your connection speed to the point that you’re unable to play any online games at all.

ExpressVPN is our number one choice, and for good reason.

With over 3,000 servers in 94 countries, it provides access to just about anything you could ever want to watch or play globally. Want to play a Korean MMO from the United States? No problem. Simply connect to a South Korean server, and you’re set.

This is arguably the fastest VPN out there, and when you’re looking for a speedy gaming experience, that’s one of the most important features.

When it comes to privacy and security, ExpressVPN excels. It has a strict no-logs policy, meaning it does not record any activity related to your online activity. And, in our DNS leak tests, it passed with flying colors.

For gaming, what makes ExpressVPN shine is its MediaStreamer feature that lets you hide your gaming console’s location. Not many VPNs support gaming consoles (unless you tamper with your router), so this is an appreciated and rare feature.

ExpressVPN is also extremely easy to set up. With minimal work, you can mask your IP address, keep yourself protected from swatting and DDoS attacks, and bypass bandwidth throttling.

Surfshark is a relatively new VPN. It showed up in 2018 and has been outperforming competitors ever since.

We tested Surfshark to ensure it was fast enough for gaming. It didn’t disappoint.

These speeds are well within the acceptable range. Any ping below 50 is usually fast enough for online gaming.

When we tested Surfshark’s security and privacy features, we were equally pleased. The DNS leak test confirmed that we were protected. As you’d expect, it also has a strict no-logs policy.

Besides PC gaming, you can also set up Surfshark on your Xbox or Playstation console. It does require a bit of setup, but there are tutorials online that make it easy.

For more information, check out our full Surfshark review.

NordVPN is a top-tier premium VPN service with a user-friendly interface. It’s excellent for beginners, thanks to its 24/7 customer service and ease of use.

There are also a wealth of online tutorials and guides on its website, helping you set up just about anything.

NordVPN has 5,093 servers across 60 countries. Every server we tested gave us fast connection speeds and a respectable ping. This is a great choice for any gamer that needs a large selection of servers from various countries.

We did find that connecting to Asian VPN servers took a bit of time. But once we connected, it was smooth sailing.

NordVPN has all of your standard protections, including a no-logs policy, absolutely no DNS leaks, and AES-256 bit encryption. NordVPN also has a feature called CyberSec, blocking ads, malware, trackers, and more.

NordVPN can be used on gaming consoles through a mobile hotspot. Simply use the NordVPN app on your computer, connect to your preferred server, then create a mobile hotspot. Connect your console to the hotspot, and you’re good to go.

For more information, check out our full NordVPN review.

PrivateInternetAccess has the most servers of any VPN on this list, with over 35,000 in 78 countries. It also gives users a generous 10 simultaneous device connections, perfect for large households.

When it came to speed, PIA performed admirably, with an average download speed of around 25 Mbps when connected to the VPN.

With so many servers, there are many options to choose from if you run into high latency.

In our tests, we found that PIA was able to unblock all North American content. When we tested European content, it was hit or miss. We needed to switch servers a couple of times to find one that worked.

This applies to gaming content as well. If you’re trying to play a European MMO, you may need to test a couple of servers.

This service has a no-logs policy, but it’s worth noting that the company is headquartered in the United States. The U.S. is not known for privacy-friendly legislation, and it shares information with other countries as well.

PIA insists they do not keep any logs, so they would have no information to pass on if the government came knocking. However, it’s important to be aware of this.

For more information, check out our full PrivateInternetAccess review.

CyberGhost is an excellent VPN, with 7,300 VPN servers in 90 countries. It has an industry-leading 45-day-money-back guarantee, giving you ample time to test it out.

This VPN can be used to protect yourself on a PC or gaming console, although the latter requires a bit of work. You can use the aforementioned hotspot method or set it up on your router directly.

Whatever path you take, CyberGhost will keep you safe from DDoS attacks and bandwidth throttling.

Using a VPN also lets you access region-specific deals. For example, you could use CyberGhost to access the Playstation store of another country to purchase games at a discount.

CyberGhost has everything you’d expect from a VPN — it passed our DNS leak test, has a strict no-logs policy, and is easy to install.

And if you run into any problems, there’s 24/7 customer support available.

For more information, check out our full CyberGhost review.

Let’s take a look at some commonly asked questions.

Can a VPN service affect my ping? 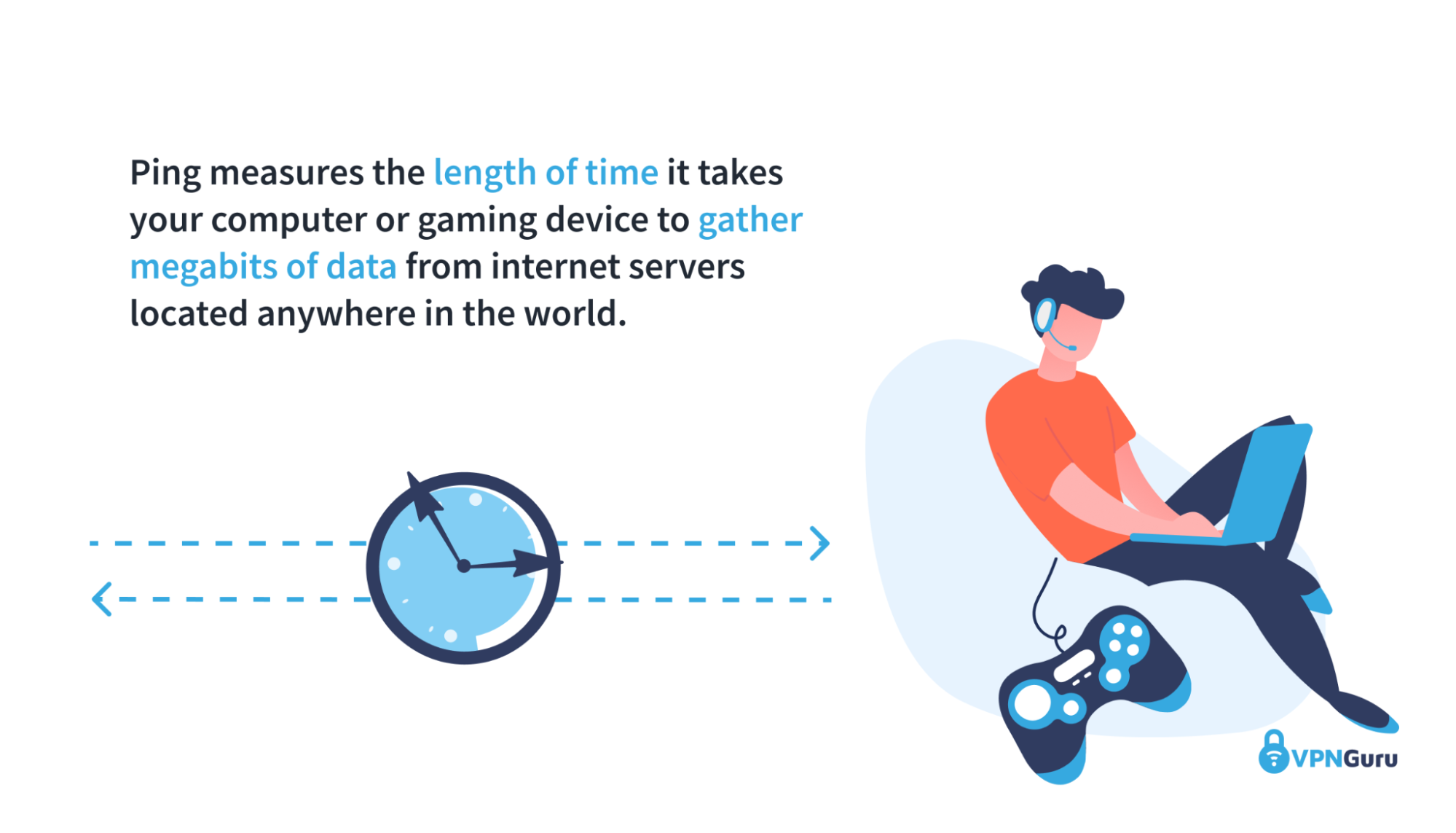 Yes, a VPN will always affect your ping.

VPNs affect your latency, which is measured with ping time. The farther away the server location is from you, the higher your ping will be.

You can choose a VPN server as close to you as possible to minimize its impact on your ping. This way, the VPN isn’t sending your information too far. This is your best bet if you want to stay protected using a VPN while gaming.

As long as your ping is between 15 and 50 ms (milliseconds), you’ll be able to game without a problem.

Is it legal to use a VPN provider for gaming?

A VPN server is legal to use just about everywhere. Businesses, the government, and individuals have used VPNs to improve their security for decades.

There are a few countries that limit access to or completely ban the use of VPNs. That includes China, North Korea, Russia, and a few other outliers.

So, if you’re not in one of the countries currently banning VPNs, using a VPN server for gaming is completely legal.

Just check the terms of service for each game you play to ensure that you aren’t violating any developer rules. Otherwise, you could end up getting banned.

What should I look for in a VPN server for online gaming?

The best VPN for gaming will have a fast connection speed. If you’re playing online games, this is the number one factor to look for.

Premium VPNs generally outperform any free VPN on the market. In fact, free VPNs can be so slow that it makes online gaming impossible.

If you play on a gaming console, you’ll also want a VPN that supports consoles. ExpressVPN’s MediaStreamer feature makes it easy to connect your PS5 or Xbox without having to tamper with your router (or purchase a specific VPN router).

Lastly, the VPN should keep you protected from a DDoS attack. Any premium VPN should suffice — just stay away from free VPNs.

A VPN brings a lot to the table when it comes to gaming.

They can keep you safe online, bringing anonymity in a world full of bad actors looking for any way to gain an advantage. And, if you want to play a game that’s not available in your region, a VPN is the best way to do it.

A premium VPN service like ExpressVPN can help you stay anonymous online while giving access to the games you want to play.

The Best VPNs for Gaming