The Best VPN for Multiple Devices

If you’re a security-savvy web user, using a virtual private network (VPN) is second nature for you every time you get online. But while a single VPN connection is fine if you only use one device to get online, things get dicey when more than one device is involved.

Can you use your laptop’s VPN software to browse safely on your phone? What if you aren’t home at the time? Can your spouse or kids use your VPN without having to buy a whole new subscription?

In this article, we’ll start by explaining how you can get multiple VPN connections from one subscription. Then we’ll let you in on some of our favorite VPNs for multiple devices. tl;dr — ExpressVPN is our top choice for a trustworthy, high-performance VPN.

Can I use a VPN on multiple devices?

Yes, it is possible to use the same VPN software on multiple devices. The question is whether the VPN provider will let you.

A VPN company builds a network of servers, then sells customers the right to access that network to keep their online activity private.

Every time you connect to the internet while the VPN is active, your website request goes to the VPN’s server first. If anybody tries to connect your browsing activity to your device’s IP address, they’ll see the VPN’s IP address instead.

It’s like a disguise that lets you browse the internet anonymously.

A single server in a VPN’s network can handle thousands of requests simultaneously. As long as the infrastructure is built properly, there’s no reason why multiple devices from the same home would put a burden on the system.

But if that’s true, you might ask, why limit the number of devices in a simultaneous connection?

Because a subscription to a VPN doesn’t actually exist.

A “subscription” is just an abstract unit that a VPN service uses to monetize its service. One subscriber can only do so much. If they want more, they have to pay more. 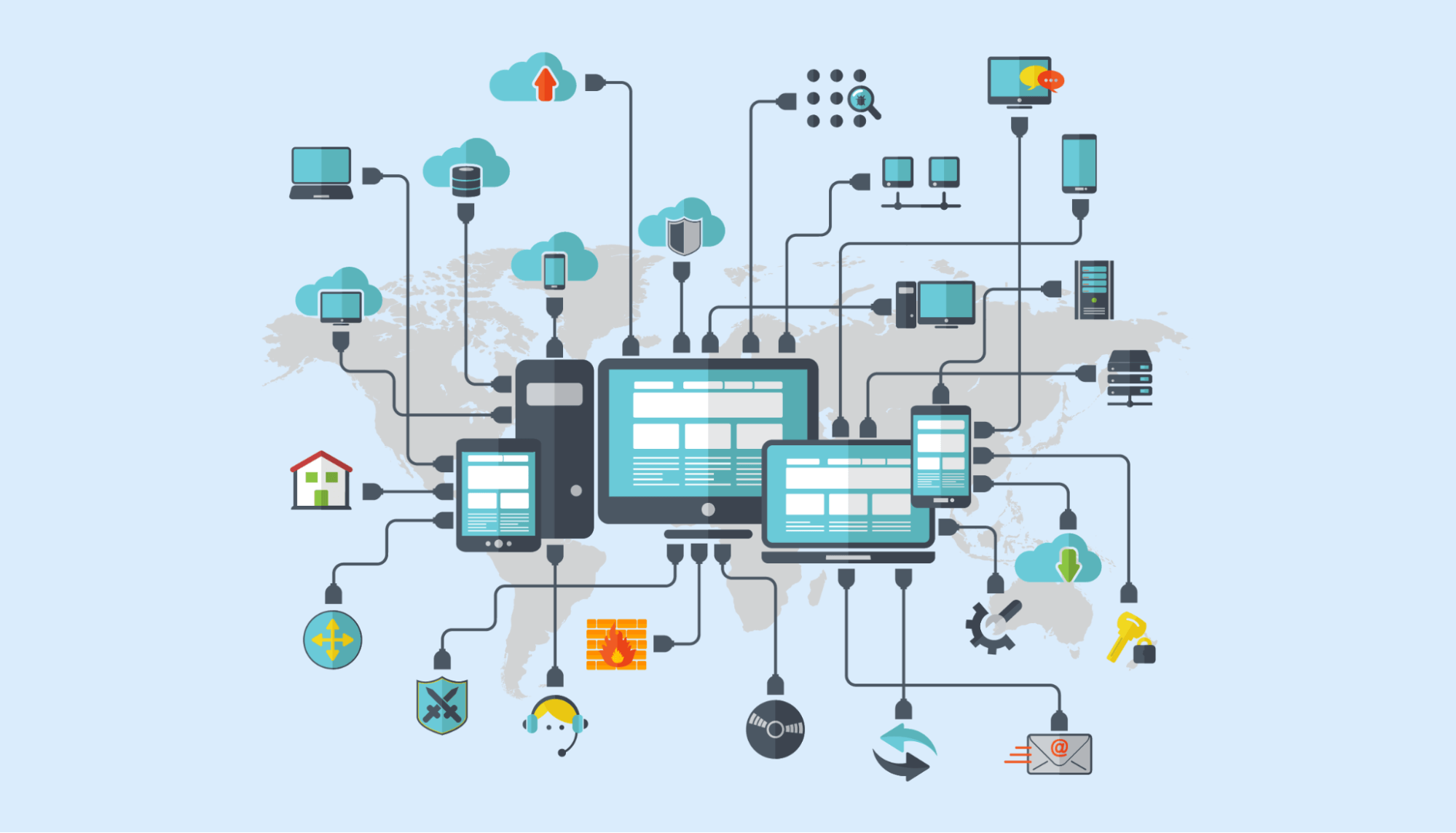 It doesn’t actually have any connection to the VPN’s performance.

Think of it like Netflix. All your TV shows are on its servers. The only thing limiting how many people can watch at once is your home wi-fi capacity.

But with no limits at all, Netflix would lose money hand over fist. So it places artificial boundaries on what you can do, requiring you to pay more. It’s the same with VPNs.

By this point, you’re probably wondering how common it is for VPNs to allow multiple devices per subscription.

How many devices can I use my VPN on?

You should be careful, though. Some of that is deceptive advertising. Just because a VPN says you can use it on five devices simultaneously doesn’t mean it will actually work on five devices at the same time.

Some multiple-device VPNs, for example, restrict the amount of bandwidth on one subscription. If all five devices connect at once, everyone’s internet slows to a crawl.

Other VPNs restrict the amount of traffic you can run through them per month. 10 GB might seem like a lot, but five devices can burn through that fast.

Then there are the VPNs that give you five, 10, or unlimited simultaneous connections per subscription, but neglect to mention that this doesn’t include mobile devices. How many people have five or 10 desktop computers in their house?

Some split the hair even finer, letting you have five or 10 devices logged into the VPN at once, but only one actively connected at a time.

What you want is a VPN that lets you connect multiple devices per subscription without any strings attached.

We’ve put together our expert picks for the ones you should trust.

ExpressVPN is probably the strongest VPN on the market. For years, it’s been tested and tested again by people like us who want to be 100% certain it’s as good as we keep saying it is.

For all those years, it’s held up against all challengers.

The true distinguishing factor of ExpressVPN is its focus on the total experience. VPNs need to be a lot of things: secure and effective, easy for beginners to use, and packed with a complete suite of features, all without being too much of a drag on your browsing speed.

ExpressVPN checks (almost) all those boxes. We love the split tunneling feature, which lets you run some traffic through the VPN while leaving innocuous requests in the open, balancing security and speed.

It’s also awesome that ExpressVPN has servers in 94 countries, which means fast service for more people worldwide — plus more access to geo-blocked Netflix content (did we mention it beats the Netflix VPN block?)

Can you use ExpressVPN on multiple devices?

You can connect with five devices at once through an ExpressVPN subscription.

Note that an unlimited number of devices can be signed into one account at the same time. Five is just the number that can actually be connected at once. You can also install ExpressVPN on your router, automatically protecting any device that logs in from your home.

Every ExpressVPN plan comes with the same features. The only difference is that you can save money by signing up for a longer plan.

You might want to do that because the price is the only real drawback of ExpressVPN. Quality like this doesn’t come cheap, and unfortunately, there’s no free VPN service or free trial (though they offer a 30-day money-back guarantee).

For more information about ExpressVPN, check out our full ExpressVPN review.

NordVPN is ExpressVPN’s most enduring challenger, the Peyton Manning to its Tom Brady. It’s an extremely strong VPN in its own right that would easily be on top if its competition weren’t so fierce.

NordVPN has been garnering a lot of attention recently for developing its own proprietary protocol (a protocol is a set of standards that let a VPN communicate with unfamiliar servers).

NordLynx is their own version of WireGuard, a new protocol that’s been taking the VPN world by storm. And it’s incredibly fast. NordVPN was already known for its focus on speed, but NordLynx takes it to the next level, topping ExpressVPN on some connections. It’s also cheaper than ExpressVPN.

Can you use NordVPN on multiple devices?

Every subscription to NordVPN lets you connect six devices at once. Like ExpressVPN, you can install it on a router. Every connection that runs through a VPN router is protected — and it only counts as one of your six.

After extensive auditing, we’re happy to say NordVPN is a completely secure VPN provider. If you happen to still be uncertain, though, ExpressVPN is the choice for you.

Want to learn more? Check out our full NordVPN review.

In the VPN space, Surfshark is the brash newcomer challenging the established elder statesmen of NordVPN and ExpressVPN. It’s lacking compared to those two leaders simply because it hasn’t been around as long, but in its own right, Surfshark is a stellar VPN provider.

This is most obvious in the size of its VPN server network. Compared to ExpressVPN serving 94 countries, Surfshark only serves 65. But that’s incredible compared to most VPNs. Even better, Surfshark’s network is regularly expanding into locations VPNs commonly ignore, like Eastern Europe, South America, Africa, and the Middle East.

Surfshark has the same split-tunneling feature as ExpressVPN, though it’s currently only available on the VPN client for Windows desktop browsers and Android phones.

Can you use Surfshark on multiple devices?

Every subscription comes with unlimited simultaneous connections, plus unlimited bandwidth — so all those devices can enjoy Surfshark’s top speeds.

You can also install it on your router, but be warned: Surfshark doesn’t always support the protocols necessary to create a VPN router.

Other perks include WireGuard, a superfast protocol that makes it easier to use multiple devices at once without experiencing slowdowns. And we’d be remiss not to mention that Surfshark is great at circumventing Netflix’s VPN blocks.

In fact, the only real downside of Surfshark is that it’s a relatively new service that hasn’t had the time to gather as much scar tissue as its direct competitors.

Interested in more information about Surfshark? We can help out with our full in-depth Surfshark review.

CyberGhost is one of our favorite VPN providers in terms of user experience. It’s great for users who are totally new to VPNs but won’t patronize savvier customers by stripping away advanced features.

Its VPN server selection list is the best example of this. Too many VPNs just throw the entire list of servers at you and expect you to figure it out on your own. By contrast, CyberGhost cleanly separates all of its servers by country. It also features dedicated servers for streaming, gaming, and torrenting, all of which are cleanly accessible in their own menus.

Like many of our other favorites, CyberGhost has adopted the WireGuard protocol, which maintains security while accelerating your internet connection speeds. It’s not the fastest on the list overall, but it makes up for slight slowdowns with unique features.

As VPN geeks, we’re big fans of the automation logic, which lets you program the VPN app to act in response to certain triggers. For example, you can set CyberGhost to automatically connect whenever you launch a certain app or not run on innocuous websites.

Can you use CyberGhost on multiple devices?

CyberGhost offers seven simultaneous connections per subscription. However, in one of their few drawbacks, that’s a hard limit.

Only seven devices can be logged in at once, even if they aren’t all connected to the VPN.

For more on how CyberGhost works, including all of its pros and cons, check out our CyberGhost review. 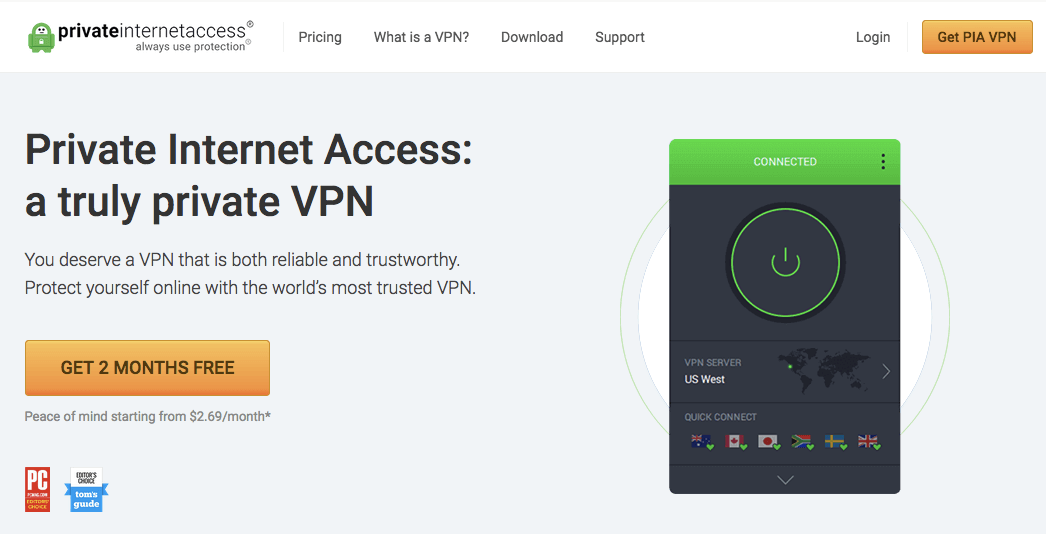 In general, it’s worth paying for security — you can’t always trust a free VPN service. But if the price tags of the others on this list give you pause, and you’re not ready to commit to one or two years with a VPN service in order to save money, PIA VPN is the choice for you.

Given that PIA is so much cheaper than most of its competitors, you might think it’s a stripped-down, bare-bones VPN that offers few features. This was true right when it launched, but no longer. PIA is constantly adding new must-have services, like a kill switch, OpenVPN and WireGuard protocols, and customizable connection and encryption settings.

Can you use Private Internet Access on multiple devices?

A PIA subscription offers 10 simultaneous connections with unlimited bandwidth. You can install it on your router, along with just about every other device (though some unusual hardware takes a bit of tinkering).

The only thing we don’t love is the user interface, which isn’t immediately friendly to new users. However, the included settings can quickly make PIA less cumbersome, and the savings are worth it.

If you want to learn all there is to know about PIA VPN, check out our Private Internet Access review.

When you’re looking for the best multi-device VPN, don’t just look at the number of allowed simultaneous connections.

You also need to make sure the VPN has a version that’s optimized for the desktop device, mobile device, browser, or other devices you plan to use it on.

Just as important, check to make sure there’s no bandwidth limit. There’s no point in a VPN you can use on 10 devices if each of those devices will run slower than molasses.

All the VPNs listed above will work hard to keep your connected devices safe. You can’t go wrong with any of them.

If you’ve had experience using any of our five favorite VPNs for multiple devices, or if you’ve got a personal favorite we missed, we’d love to hear about it in the comments.

The Best VPN for Multiple Devices