VPNs have become essential for anyone that uses the internet. They provide secure access to the web and protect your information from cybercriminals and snooping Internet Service Providers (ISPs).

With this rise in VPN usage comes a rise in VPN providers. There are hundreds of VPNs for users to pick from, all offering their own experience.

UltraVPN is a relatively new player in the VPN game, but it has grown in popularity over recent years, given its stellar list of features. It offers enough features to compete with market leaders like ExpressVPN and Surfshark, and it does so at a competitive price.

We conducted an in-depth review of the VPN provider and unpacked all of its pros and cons, so you can decide for yourself if UltraVPN is the right fit for your needs. 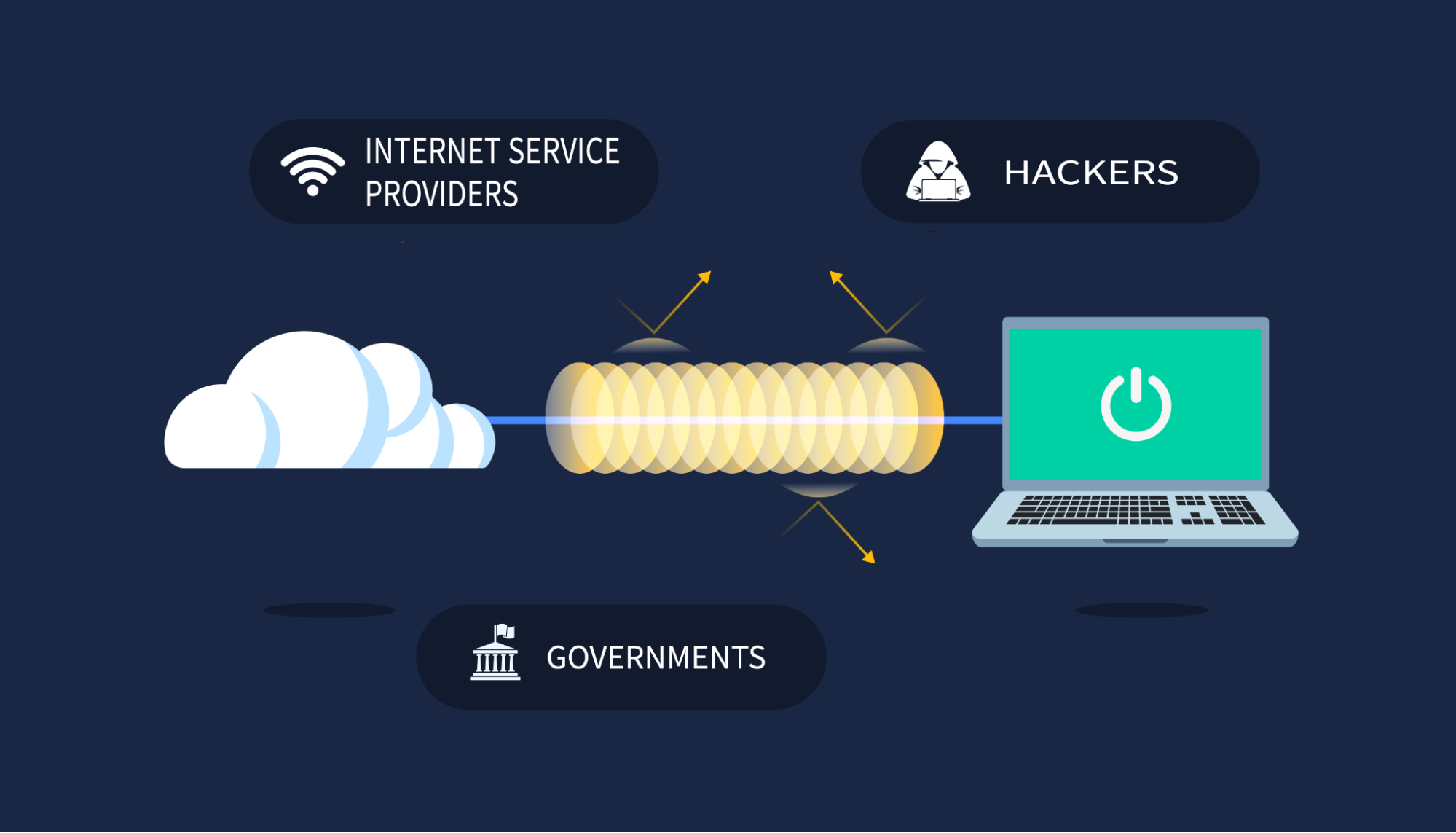 All the data that passes through this tunnel is encrypted, meaning your ISP cannot access your information. Even if they somehow manage to gain access, they will be unable to read or understand it. The encryption makes it appear as gibberish.

Many people also use VPNs for torrenting files, unblocking geo-restricted content on streaming platforms, and connecting to company software/platforms worldwide. This is especially important if you work on a remote team.

What should you look for in a VPN?

Choosing a VPN can be pretty tricky. There are so many options, and at first glance, it doesn’t look like there’s much to differentiate between them. But when you start to dive in deep and examine a VPN service, you’ll notice that some providers have excellent features and some do not.

Here are six key areas that a quality VPN will excel in:

It’s not the most feature-loaded VPN client out there, but it’s a good option for non-intense usage.

Let’s look through some of its features.

UltraVPN provides exceptional speeds consistently. It can compete with more famous names like ExpressVPN and NordVPN.

Regardless of your location or the server you pick, UltraVPN’s connection speed is fast enough for lag-free gaming, streaming video content, and uninterrupted downloads.

VPN users usually experience a drop in speeds when they pick servers far away from their actual location. But surprisingly, the difference was hardly noticeable with UltraVPN.

Keep in mind that different users might get different speed test results based on their physical location and the speed of their internet connection.

UltraVPN can unblock Netflix across multiple countries. This is very useful as streaming companies provide different content based on where you are in the world. For instance, someone watching Netflix in the UK would have a different video library than someone accessing the same service in the U.S.

The problem is that streaming services are aware of this VPN-related loophole and take measures to block access.

Thankfully, UltraVPN manages to sidestep these efforts for Netflix and most big streaming platforms, including Amazon Prime Video, BBC iPlayer, and Disney+.

Not only does it unblock geo-blocked content on all these platforms, but it’s fast enough to watch shows in HD with minimal buffering.

While UltraVPN can get through most of the blocking efforts, we experienced some buffering on platforms like Amazon Prime Video and BBC iPlayer.

While there’s no information on P2P support or P2P-optimized servers on UltraVPN’s website, the provider’s excellent download and upload speeds paired with their robust security make the provider adequate for torrenting.

Many VPN clients do not outwardly state their support for torrenting, as they fear legal repercussions, but they do allow it on their platform. A general rule of thumb is that unless a VPN specifically states that it outlaws torrenting, assume it’s fair game.

Based on our research, UltraVPN allows you to torrent.

UltraVPN has 100+ servers spread across 90 countries. While this is a relatively small server park compared to big-shot competitors like Private Internet Access or NordVPN, it still gets the job done.

Users can connect to these servers via a desktop app for Windows and Mac or on their mobile device via an iOS or Android app.

While there might be fewer servers, the large number of server locations is quite impressive for a small provider. The server network is diverse, meaning users from all over the world can access global content with ease.

Moreover, since these servers are spread out, most users can pick the ones closest to them to get the fastest speeds.

UltraVPN offers AES-256 encryption, which is a military-grade level encryption protocol. This is more than enough to keep your data secure at all times.

IKEv2 is a popular protocol, whereas Hydra is UltraVPN’s own security-focused protocol.

Other typical VPN protocols are OpenVPN, WireGuard, PPTP, etc. Industry-leading VPN clients often offer a combination of four or five different protocols on average. It should be noted that OpenVPN is one of the most popular protocols out there, and UltraVPN does not include it.

Despite the limited protocol choices, UltraVPN passed all DNS leak and IP leak tests, meaning none of your data is leaking.

To further secure your data, UltraVPN uses its own DNS servers and a secure firewall.

Despite its outstanding performance, UltraVPN does have some issues:

UltraVPN does not list its country of origin on its website. However, its Android app on the Google Play Store lists Betternet LLC as the parent company. In the Store’s Information section, they list a Swiss address for Betternet LLC. 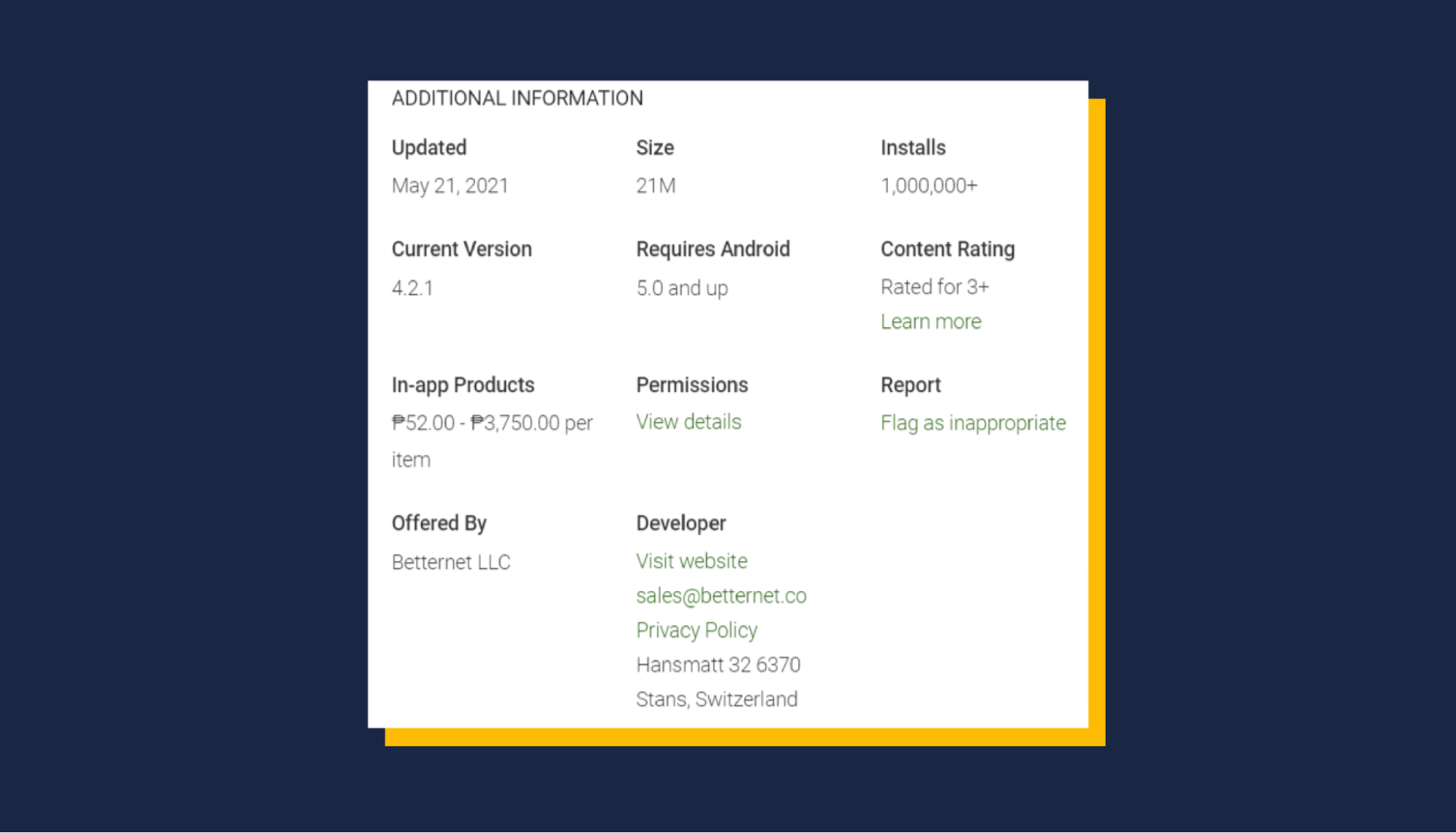 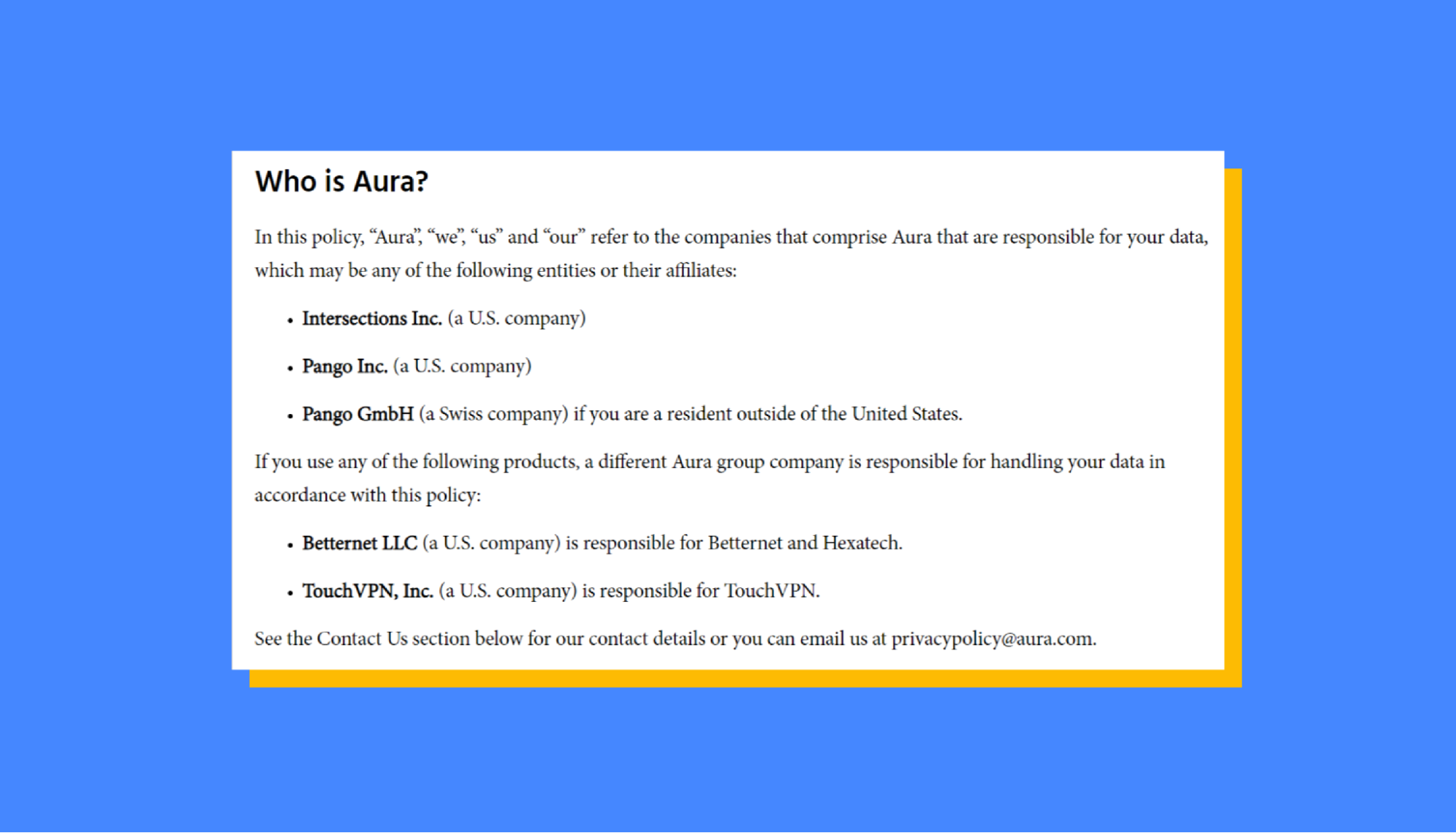 This is worrisome, since the U.S. is a major part of the 5-Eyes intelligence alliance, along with Australia, Canada, New Zealand, and the United Kingdom.

This is why most other VPNs come from countries that are not part of the alliance.

There’s also a separate privacy policy for the VPN, which states that the company collects your original IP address and approximate location. However, they say this information is not linked with any VPN activity and is instead linked to fraud protection and helping you identify the best servers.

However, they also state that they have a no-logging policy.

UltraVPN’s annual VPN subscription is slightly more expensive than that of industry leaders like ExpressVPN and Surfshark.

While this annual plan is expensive, you can try out UltraVPN’s services with an affordable monthly plan at just $8.99 per month. Some industry leaders charge around $12.99 for a month-to-month plan, so UltraVPN is ahead of the game here.

Like many other VPNs, UltraVPN does not work in China. This is because of the nation’s restrictive policies where only government-approved VPN providers can be used.

Only a few VPNs, like ExpressVPN, can be used to break through China’s Great Firewall. 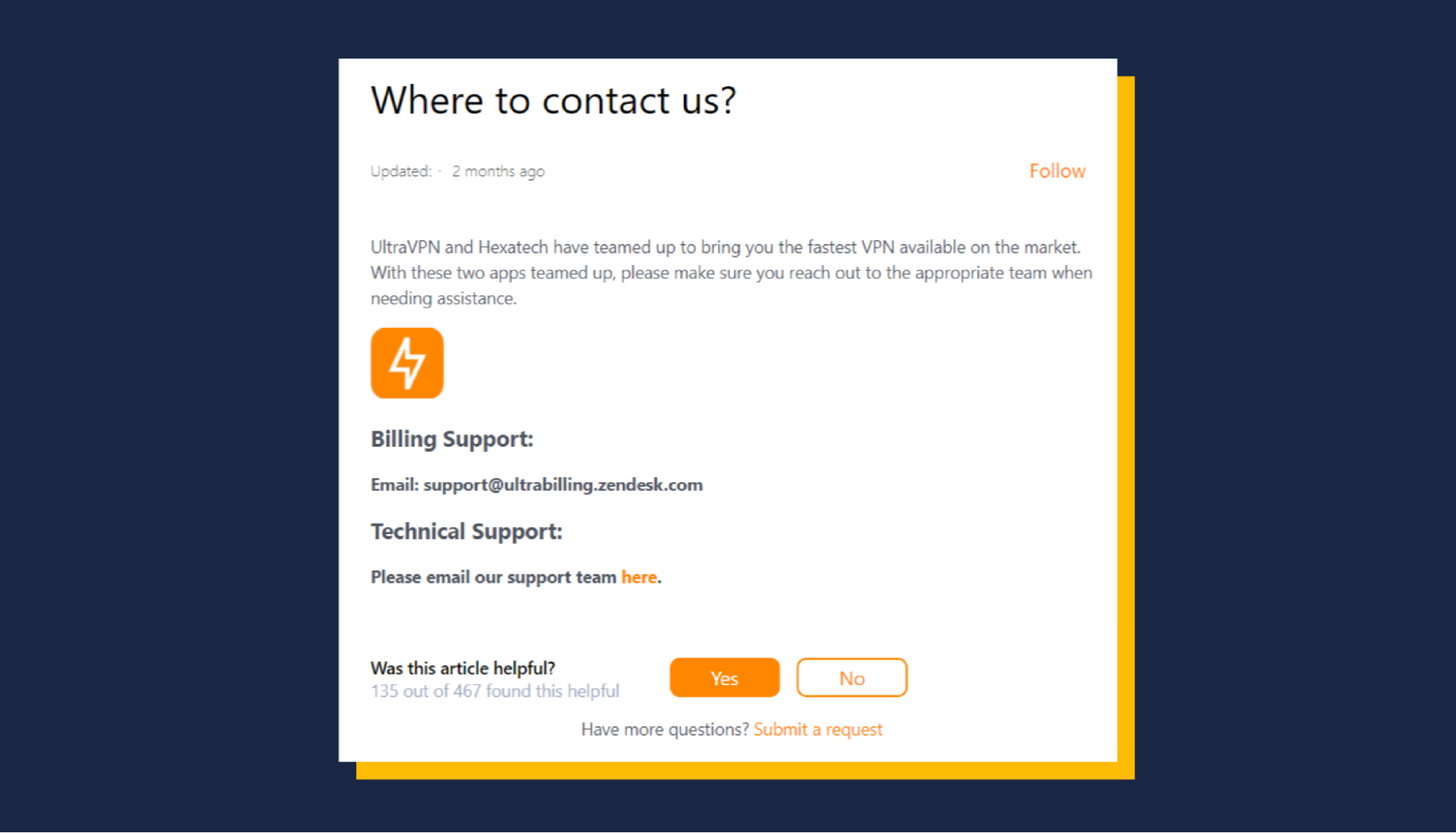 Unfortunately, Ultra VPN only offers customer service through a support request ticket or an email, both of which have no response-time guarantee.

If your VPN is down for whatever reason, you can go through their knowledge base to hopefully find a quick solution, or you can create a support ticket and wait for them to respond. 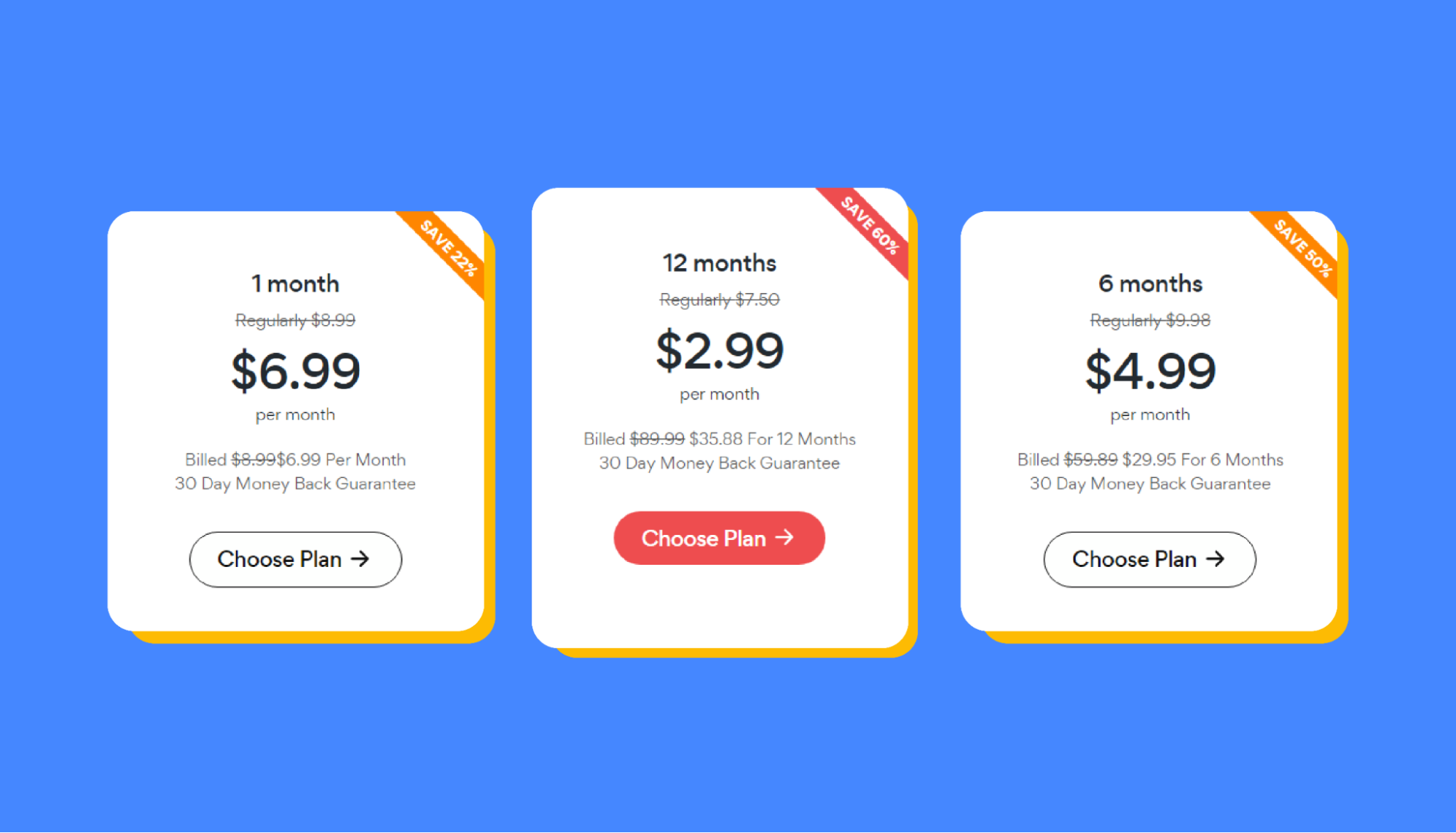 UltraVPN is an adequate choice for basic VPN users, but there are larger VPN providers out there that provide a lot more features.

Here are five alternatives to UltraVPN.

ExpressVPN is an industry-leading VPN provider that has achieved global popularity with its extensive list of features.

Some notable features include:

There’s a multitude of other features we could cover, but a stand-out is the TrustedServer technology. That means no user information appears on a hard drive. Instead, all servers are RAM only.

This prevents data breaches and eliminates any backdoors that hackers or malware could exploit.

We’ve covered all of these features and more in detail in our ExpressVPN review.

Read our NordVPN review to learn more about this provider.

Surfshark lets you connect unlimited devices with just one subscription. This is an excellent offering since the provider offers 3,200+ servers in 65 countries, all of which are ultra-secure and P2P-friendly. Additional features include a no-logs policy, AES-256 encryption, and a lot more.

You can check out the Surfshark review to find out about this provider’s other features.

Private Internet Access (PIA) is one of the first globally-renowned VPN providers.

With 32,992+ servers in 78 countries and multiple connection protocols, users will have no problem finding the perfect option for their needs. To add to this, PIA employs the same high-level security and privacy features as other market leaders.

Our Private Internet Access review explores why this provider is so loved.

CyberGhost is not as famous as the others on this list, but it still has a promising set of features. With thousands of servers, a kill switch, AES-256 encryption, and fast speeds, CyberGhost is definitely worth checking out.

Find out more about this provider in our CyberGhost review.

UltraVPN is a relatively basic VPN that works best for general browsing, streaming, and gaming. It’s one of the fastest VPNs out there and has enough server locations to prevent connection hiccups.

Our experts have reviewed many VPNs to help you choose the best one. You can read all our VPN reviews here.