TunnelBear VPN certainly looks awesome. We can’t think of another VPN provider that tops one of its web pages with a picture of a roaring bear shooting lightning into the Matrix.

But while it’s easy for a VPN to look good, it’s harder for it to actually work well. Does TunnelBear succeed where it counts?

This VPN service is best known for its free plan, which lets users protect 500 MB of traffic per month without paying.

Is that enough to keep you safe online? Or should you look for a stronger service, even if it means spending money? Find out in our complete TunnelBear VPN review.

What is TunnelBear VPN?

TunnelBear VPN is a virtual private network designed as an accessible, user-friendly way to stay private online. It was acquired by McAfee in 2018, but it continues to operate independently.

TunnelBear works the same as other VPNs. First, you download the VPN software or browser extension for the appropriate platform. Then you use that app to connect to a server in TunnelBear’s network. 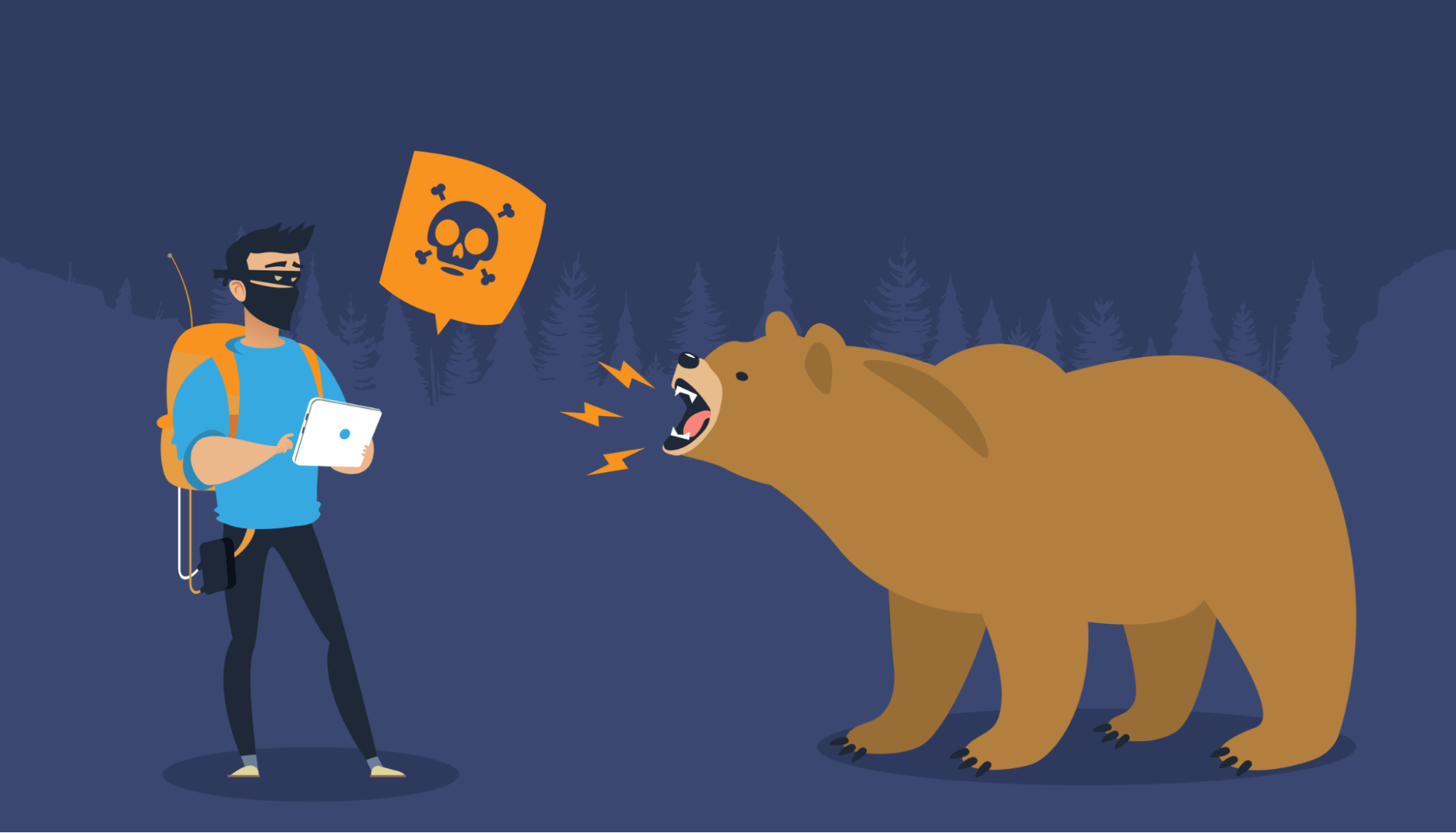 Once you’re connected, you enter an encrypted tunnel (hence the name). Everything you do via the VPN server is encrypted until it leaves the tunnel at the destination website.

Connecting to sites through a VPN server also conceals your IP address. Anybody who tries to spy on you will see one of TunnelBear’s IP addresses instead of your own. Without that “fingerprint,” nothing you do online can tie back to your real identity.

TunnelBear has its problems, but there’s also a lot to like about it. It’s user-friendly, gets into Netflix, and has pretty good download speeds. However, compared to the best of the best, it’s lacking in some areas.

TunnelBear’s free plan is one of its best features. You can access the entire server network and all other features without paying a cent.

The only limit is bandwidth. As a TunnelBear Free plan user, you’re limited to 500 MB every month, though this jumps to 1 GB for any month you tweet about TunnelBear.

Note: As limiting as 500 MB might feel, we don’t recommend participating in the Twitter promotion. Connecting your Twitter handle to your VPN account gives the VPN far more information than necessary. TunnelBear is privacy-conscious, and there’s no reason to believe it’s done anything shady with the Twitter info, but this is not a risk worth taking.

Download speed and upload speed are two of the most important signs of VPN quality. If a VPN app dramatically slows down your web browser, that’s a clue that its infrastructure is under strain. It might mean the whole VPN service isn’t designed well.

TunnelBear performed well in our speed tests, though not as well as in our tests of Surfshark, Private Internet Access, or Zenmate (see the linked reviews for the numbers). We started with an unprotected download speed of 233.74 Mbps and an upload speed of 6.93 Mbps.

When we connected to Tunnelbear, selecting the option for “fastest server,” the VPN app sent us to a U.S. server with minimal interruption.

Our download speed dropped to 170.41 Mbps, a loss of about 27%. The upload speed had a minimal loss, which was great.

While this was a good showing overall, there’s one problem. The TunnelBear VPN app doesn’t allow users to choose between different servers in a single country, even for large countries like the United States and Canada. If your local server is slow, you’re stuck with it.

Although we recommend never going online without a VPN, watching shows or movies on a streaming platform while connected to a VPN can cause problems. You can use a VPN to view content in countries where the streaming company lacks the copyright. That’s why most streaming services block VPNs altogether.

This has led streamers and VPNs to try and outmaneuver each other. VPNs try to disguise themselves to get around streaming blocks while streaming platforms try to catch them.

TunnelBear is reasonably good at accessing streaming services. It managed to get into Netflix on the first server we tested. Other servers accessed Amazon Prime Video and HBO Max.

The rest of the streaming services we tried were a different story. We tried several servers and were unable to unblock Hulu, Disney+, or BBC iPlayer. With that said, TunnelBear is pretty good at streaming half the time, which puts it above many other VPNs.

TunnelBear VPN comes with two excellent security features (three if you’re using the VPN on an Android device). They’re all available on the Free plan. 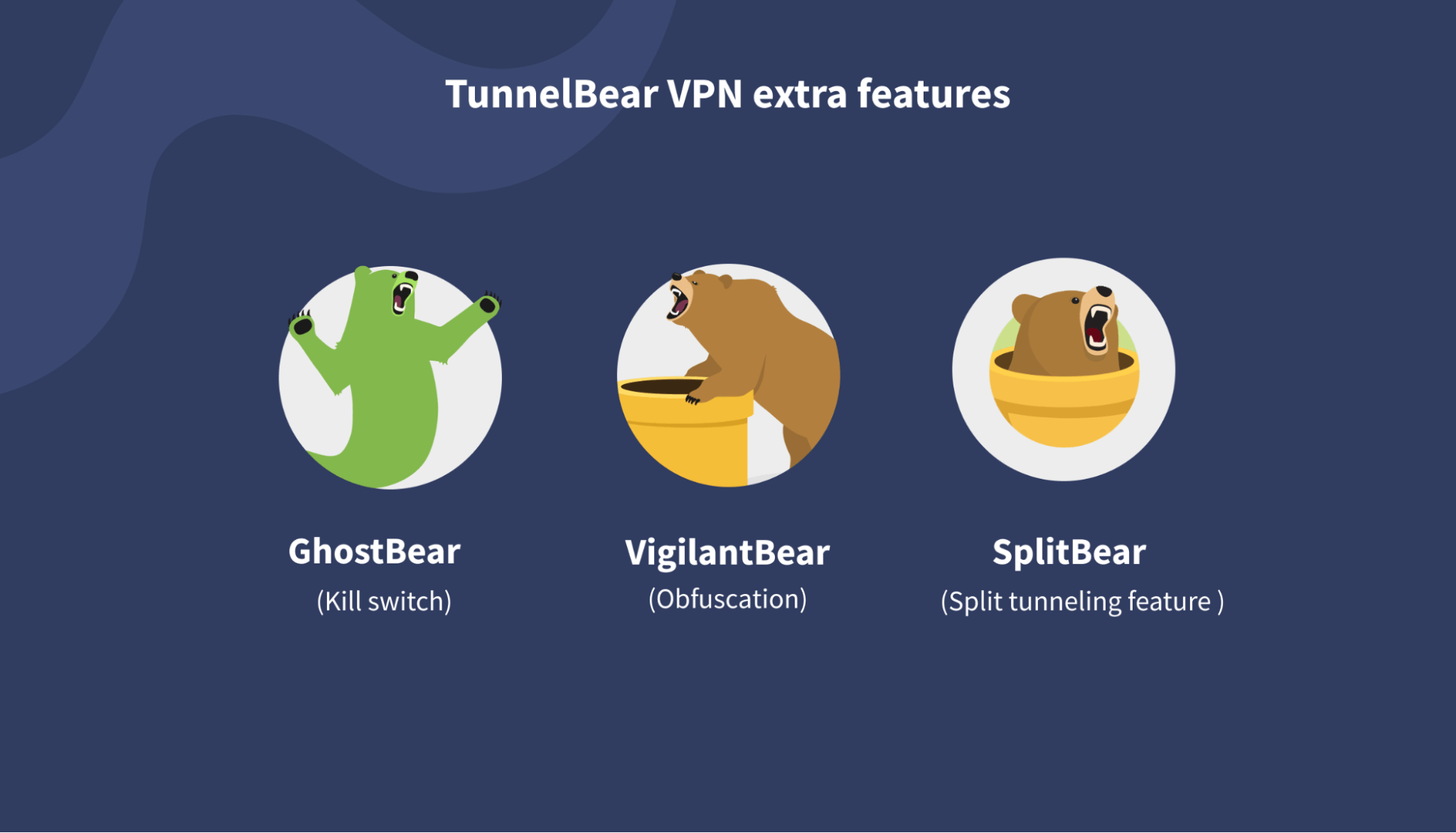 GhostBear is TunnelBear’s obfuscation proxy. Obfuscation means that the VPN hides the fact that it’s a VPN. All VPNs do this to some degree (like to get around streaming blocks), but an intentional obfuscation proxy goes one step farther.

GhostBear is designed to work against regimes that try to censor and block internet activity, like the governments of China, Turkey, and other nations. Free speech is a continuing concern for TunnelBear, which provides its service for free to citizens of authoritarian countries.

VigilantBear is TunnelBear’s kill switch. While active, a kill switch monitors your connection to the VPN server. If it drops for any reason, the kill switch immediately cuts off your access to the internet. This prevents you from accidentally sharing any information without protection.

Android users also get access to SplitBear, a split tunneling feature. With split tunneling, you can decide which apps run through the VPN, letting some run faster while others gain VPN protection.

But the company doesn’t ask you to take its word as gospel. TunnelBear subjects its no-logging policy to annual audits by independent security firm Cure53. It has passed four audits so far with only minor flaws.

TunnelBear is aimed at people who have never used a VPN before. The free version, cute marketing, and simple interface spell that out.

But even if you’re new to VPNs, you shouldn’t have to settle for less when choosing one. Free access to TunnelBear’s features is nice, but there are so few of them that you miss out on the full benefits of using a VPN.

Split tunneling is limited, and you’ve got very little control over how the VPN behaves (especially compared to a features powerhouse like CyberGhost). You can make your home Wi-Fi a trusted network, but that’s about it. 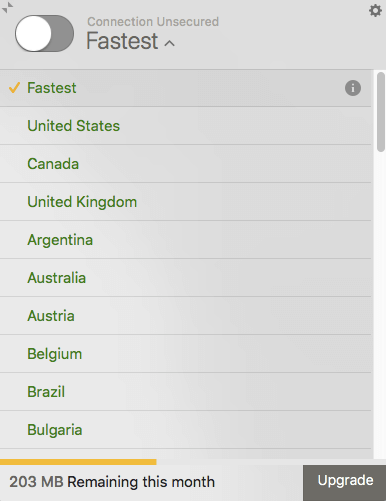 It’s not just advanced features, either. Some basic things are missing, including the ability to choose your own security protocol (more on this below) and even a search feature for the server list. TunnelBear clearly isn’t trying to be a feature-heavy VPN, but after so much time using ExpressVPN and NordVPN, it feels threadbare.

The TunnelBear app doesn’t let you choose your VPN protocol at any time. On every platform except Windows and iOS, OpenVPN is the only protocol supported. All you’re allowed to do is switch between the two versions of OpenVPN — UDP is faster, while TCP is more secure.

A security protocol is a common language that a VPN uses to mediate between private devices and public servers without revealing any sensitive information. Different protocols have different advantages, so it’s important that a VPN give you the freedom to choose your security protocol.

For example, IKEv2 is usually the fastest for mobile connections, while OpenVPN and WireGuard offer the best balance of speed and security. Some VPNs have even built their own protocols, like ExpressVPN’s Lightway and NordVPN’s NordLynx (both of which are among the very best).

When users can’t switch protocols, they lose a vital tool for making their VPN work better. Many VPNs that can’t get into Netflix on one protocol can do so on another. It’s another example of TunnelBear tying its user’s hands unnecessarily.

TunnelBear has over 3,000 servers total, which should, in theory, make it better at handling loads. However, it’s also committed to not using virtual servers. In our view, that’s a miscalculation — virtual servers could provide better service to the citizens of authoritarian countries where TunnelBear gives out free bandwidth.

TunnelBear’s limited server network is also a problem because the system doesn’t let you choose a server within countries. To get the most out of a VPN, you need a server location close by. TunnelBear servers are in 46 nations, a number dwarfed by ExpressVPN, NordVPN, and even the far newer Surfshark.

Each TunnelBear account only permits five devices to be connected at a time. To get more, you have to sign up for a more expensive TunnelBear Teams account.

Normally, when a VPN restricts your number of connections, you can get around the limit by installing it on a router, protecting your whole home internet connection at once. But TunnelBear can’t be installed on routers (at least not without highly specialized technical knowledge).

The TunnelBear Free plan comes with 500 MB of traffic per month, or 1 GB if you mention it on Twitter. That might sound like a lot, but it’s actually fairly restrictive — for reference, it took over 40 MB just to test TunnelBear’s servers. 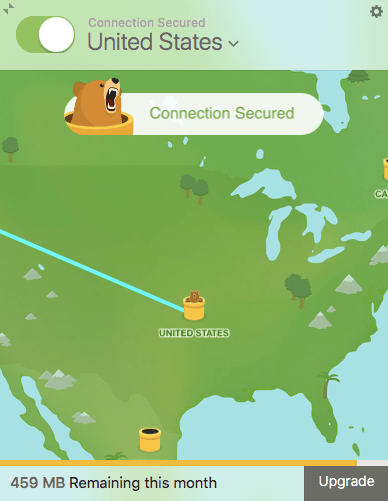 TunnelBear Unlimited removes the traffic cap. Each account works for up to five devices simultaneously. It costs $3.33 per month.

TunnelBear Teams is the same as Unlimited but offers centralized control and billing for teams who want to protect all their devices, plus a dedicated account manager. It costs $5.75 per user per month. 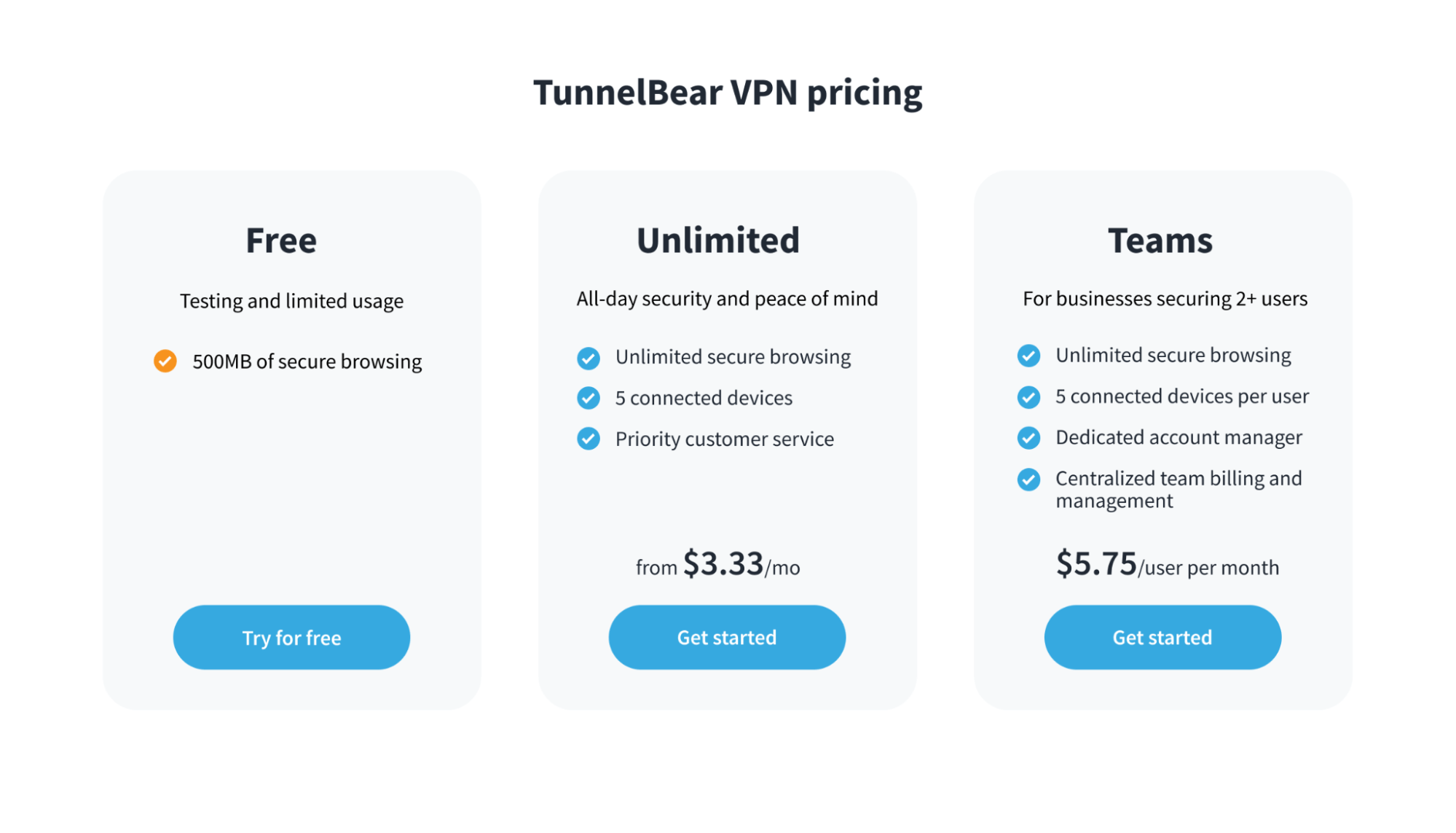 There’s no free trial (the Free plan covers that). TunnelBear also doesn’t specify any sort of money-back guarantee, possibly also due to the Free plan.

To pay, you can use either a credit/debit card or Bitcoin. The cryptocurrency option is nice for users who want to remain as anonymous as possible.

If you’re uncertain about TunnelBear, here are six top VPN providers you might want to check out instead.

ExpressVPN is much faster than TunnelBear, and it’s consistent. Every server in its network is reliably fast. It’s also the only VPN to offer Lightway, a fast, reliable protocol. Overall, it’s the best choice on the market, due to the consistently high quality of its features. Read our full ExpressVPN review for details.

Surfshark is a perfect choice if you’re a new user looking for a simple VPN. It comes with more features, better speeds, and a larger server network than TunnelBear. Read our full Surfshark review to learn more.

NordVPN has a large server network, excellent speeds, and the exclusive NordLynx protocol. It’s a great choice for streaming, as it’s able to get into all major platforms. Read our full NordVPN review for more.

Zenmate is a great option for secure browsing. It matches TunnelBear’s no-log policy but leapfrogs it by supporting additional VPN protocols. Read our full Zenmate review to see how.

TunnelBear VPN has a decent free plan, but 500 MB just isn’t enough to do what you need to do online. Its paid version is better but ultimately doesn’t measure up to the heavy hitters.

Your online security is too important to go with anything but the best protection possible. ExpressVPN, Surfshark, and NordVPN offer the strongest security and the best performance.

Tell us about your TunnelBear experiences or your other favorite VPNs in the comments.