TigerVPN Review: Private But With Drawbacks

TigerVPN may be notoriously easy to use, but can it claw through the toughest blocks and security threats? In this VPN review, we’ll examine TigerVPN from whisker to tail and see just how well it stacks up to other leading providers.

Founded in Slovakia in 2011, TigerVPN has earned a great reputation for its easy setup and simple, user-friendly interface. With more VPNs than ever, though, TigerVPN’s security and privacy features have come into question. Many users aren’t finding these features capable of unblocking their favorite websites or securing their browsing.

But is TigerVPN still a good VPN service provider? Before we dive into the details of this extensive TigerVPN review, here’s what you should look for in a VPN to help you decide if TigerVPN’s features are worth the price.

What Should You Look For in a VPN?

What makes a good VPN? While some VPNs are better than others for certain purposes, most share many of the same general features and capabilities. 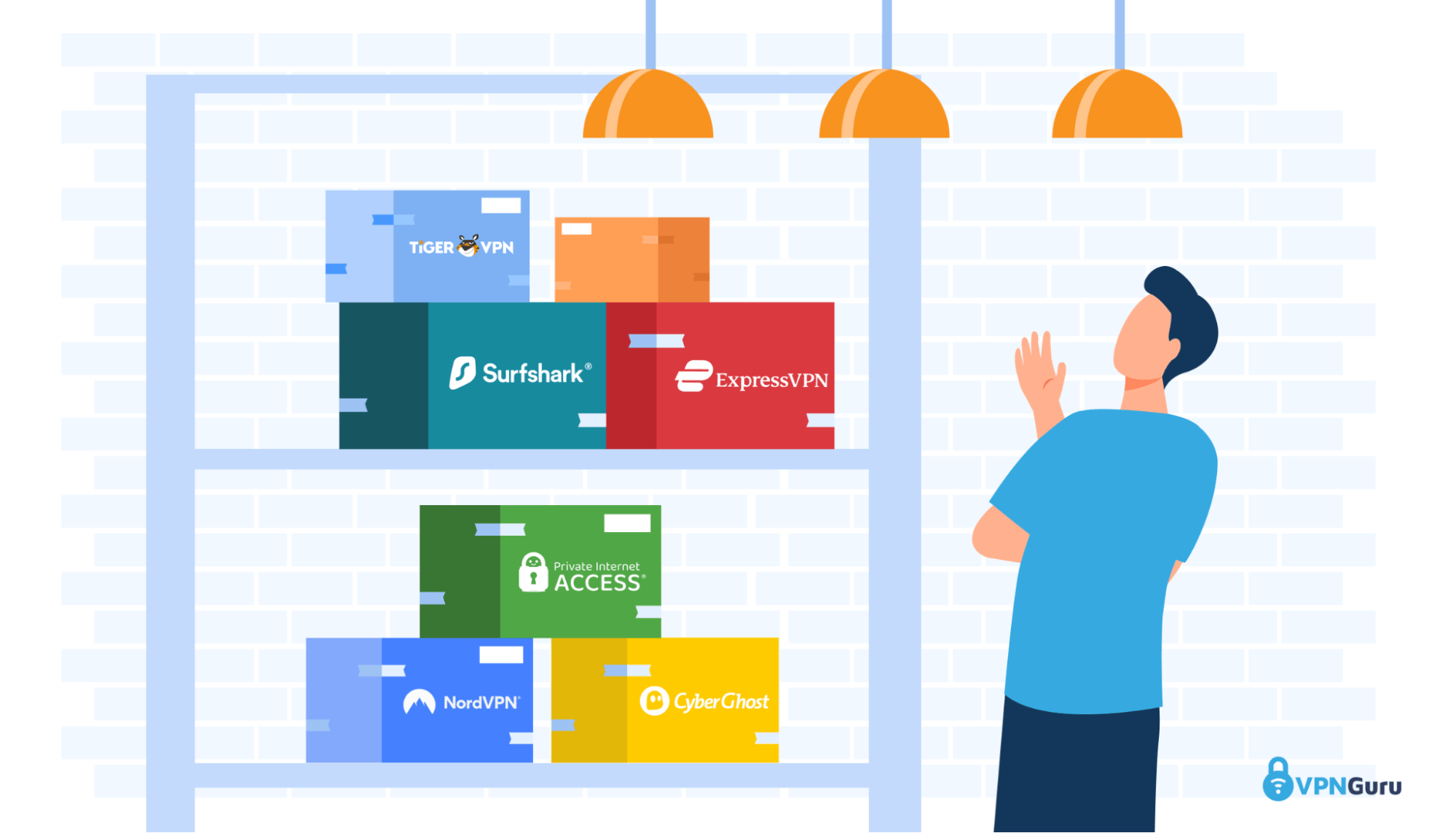 Keep these key points in mind when choosing your next VPN service provider.

Most people use VPNs to unblock streaming services, games, and other restricted content. From accessing Netflix in a foreign country to unblocking websites, a VPN should be able to unblock almost anything you want to access.

But how do you know what a VPN can unblock?

While most VPN reviews provide lists of unblocked websites, the number of servers and countries on a provider’s network is another good metric. Since VPNs use foreign servers to overcome geographic restrictions, networks with more servers are more likely to unblock certain services.

Connecting to a VPN network shouldn’t sacrifice network speed or performance. Unfortunately, some providers are better at this than others. Like with unblocking ability, the servers and average VPN connection speeds are good metrics to gauge effectiveness. Again, the more servers in more countries, the better the performance.

The best-performing VPNs need to be efficient at hiding your identity and securing your data. While most VPNs automatically do this by routing your traffic through their servers, the best VPNs should also include strong encryption and other security features.

You should also review your VPN’s logging policy and jurisdiction (country of origin). Ideally, a VPN service provider shouldn’t keep logs or exist in a jurisdiction where a government can force them to share your data.

Easy to use with good support

What good is a VPN if you can’t use it? The best VPNs are easy to use with simple interfaces and broad device compatibility. Also, check for good customer support through documentation, live chat, online forums, or all the above.

Finally, your VPN should fit your budget and deliver great value. Thankfully, there’s a VPN for almost every budget, and most offer reduced monthly rates for longer subscription periods.

TigerVPN lacks many key features common to most leading VPNs.

Security features are the biggest category here. In addition to having no double-hopping or obfuscation capabilities, TigerVPN also doesn’t offer an internet kill switch feature — something crucial for shutting down a VPN connection in an emergency.

TigerVPN also offers very few simultaneous connections. Unlike most other VPNs, TigerVPN varies connections by subscription length. It has a maximum of five simultaneous connections for a three-year plan. With many VPNs offering this as a bare minimum, users with many devices may want to look elsewhere. Of course, it’s not all bad news. In addition to being compatible with most major desktop and mobile devices, TigerVPN is in the safe jurisdiction of Slovakia. Combined with a no-logging policy, TigerVPN is a good choice for privacy.

Summary: TigerVPN lacks many key security features and offers very few simultaneous connections. However, its logging and privacy policies put it on par with most other leading VPNs.

Regarding unblocking streaming services and other websites, TigerVPN does not get the job done.

Except for a handful of Netflix countries, most TigerVPN users report poor results when unblocking streaming services. TigerVPN also isn’t able to access BBC iPlayer and other streaming services with strong geographic restrictions.

Users in China are also at a disadvantage. In most tests, TigerVPN was unable to bypass the Chinese “Great Firewall.”

Summary: TigerVPN offers little to no unblocking ability. Users should look into other VPNs for unblocking their favorite websites and streaming services.

Thankfully, download speeds were reasonably good. Connecting to a US TigerVPN server only slowed the connection from 34 Mbps to about 27 Mbps during a speed test — a reduction of about 25%. However, performance varied between servers, with UK connections being almost twice as slow.

Summary: TigerVPN’s limited server network and varying connection speeds simply can’t keep up with other VPNs. However, US and Canadian users can still expect decent performance.

TigerVPN offers a mixed bag of security features. On the upside, TigerVPN offers military-grade AES 256-bit encryption, along with a full range of VPN protocols ranging from OpenVPN to IPsec and PPTP. The provider also offers split tunneling, allowing users to choose which apps will use the VPN. However, all of these features are common in most VPNs.

Despite excellent encryption and protocol support, TigerVPN completely lacks most of the other vital security features you’d need in a quality VPN service. Most notably, it has no internet kill switch, double hops, or obfuscation. Without these features, users can’t quickly shut down their VPN connection or route traffic through more than one VPN server.

Summary: TigerVPN offers almost no security features. While it may have strong encryption and protocol support, most other VPNs offer these by default.

With a safe jurisdiction and no activity logs, TigerVPN users can rest assured that their data, IP address, and identity remain private. Though it does keep some connection logs, its privacy policy suggests that the data collected is relatively non-invasive.

TigerVPN also offers full support for torrenting and downloading over P2P servers. While some users have reported mixed results when connecting to P2P servers, they seem to be the exception.

TigerVPN is compatible with almost every major desktop, mobile device, and operating system. Desktop support includes Windows, macOS, and Linux, while mobile support includes iOS and Android. The VPN is also available as a browser extension for Chrome and Firefox. However, specialty devices such as Amazon Fire deliver mixed results.

Users can also use TigerVPN on most routers. However, setup usually requires manual configuration, making it a no-go for non-technical users.

Summary: TigerVPN is compatible with most major devices and routers, though results may vary with specialty devices.

TigerVPN’s dead-simple user interface is both a benefit and a drawback. Though being easy to use as both a desktop and mobile app, part of the interface’s simplicity is its complete lack of advanced options and settings. At a bare minimum, users can choose their VPN server and even browse past favorites. Unfortunately, that’s about it.

Customer support is also mixed. While TigerVPN offers live chat, some users have reported that the chat is occasionally offline. Given its location in Slovakia, many users outside Europe might not receive great live support. However, they still offer email support and user guides, which may be necessary for manual setup.

Summary: TigerVPN’s simplicity is mostly due to its lack of advanced settings. User support is also available, though live chat is sometimes offline.

TigerVPN is one of the most expensive on the market. With month-to-month plans starting at $11.99 a month, TigerVPN is just as expensive as ExpressVPN and other premium providers. Given its small network size and minimal security features, TigerVPN isn’t a great value.

TigerVPN accepts most major credit cards, along with anonymous payment options like Bitcoin. Regardless of how you pay, it only offers a limited money-back guarantee of three days. That’s only with data usage of less than 500MB.

Summary: TigerVPN is not a good value. Despite being just as expensive as premium VPNs like ExpressVPN, it offers none of the security and performance that users would expect.

With high prices providing only a limited range of servers and security features, TigerVPN’s poor value makes almost any other top VPN a good alternative. 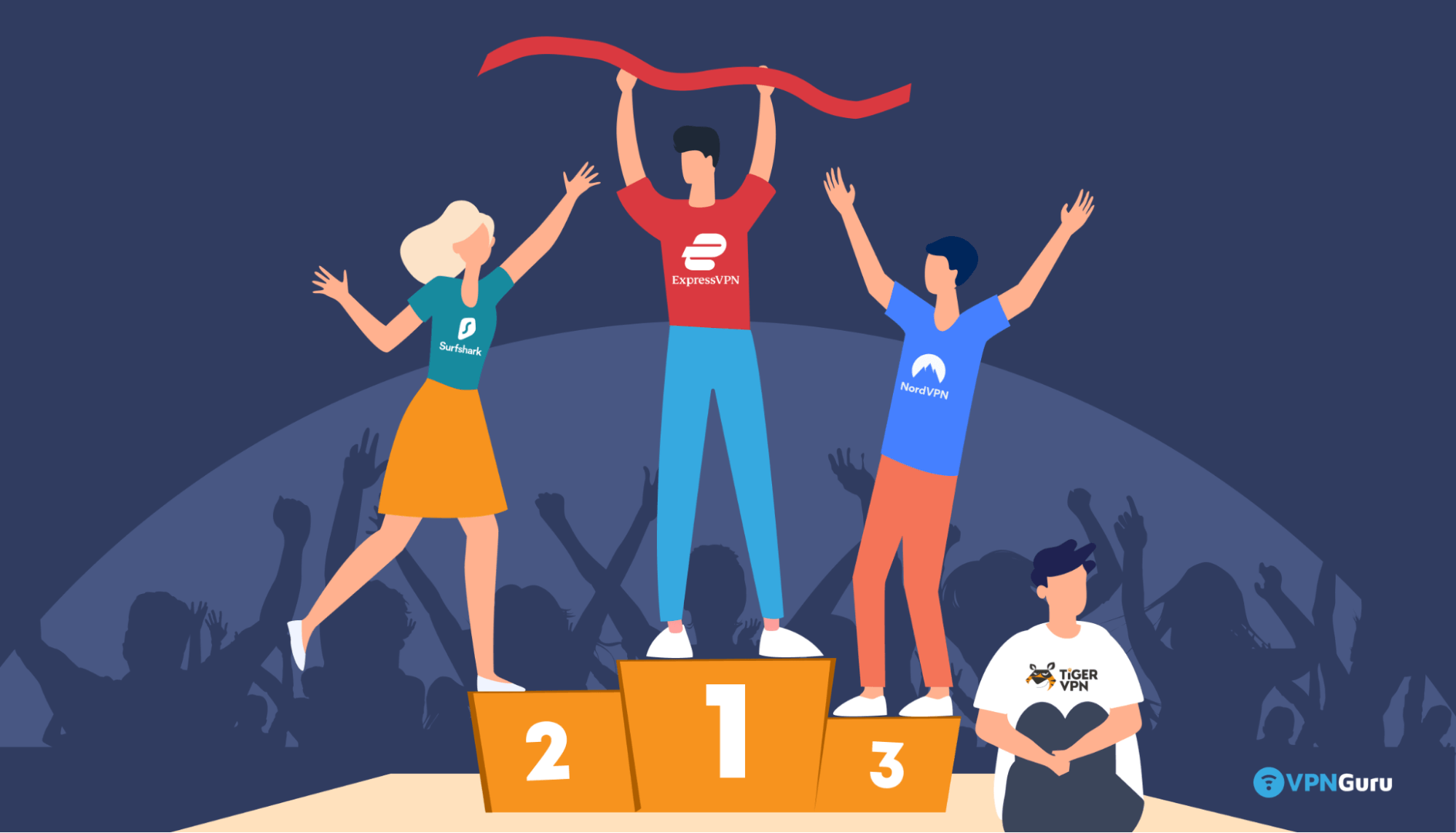 Here are just a few of our favorites.

With over 3,000 servers in over 94 countries, ExpressVPN is one of the world’s largest and most popular VPN services. With famously strong unblocking and performance backed by a full range of security and privacy features, ExpressVPN is superior to TigerVPN in every way.

However, both VPNs still share some similarities. Both use military-grade AES 256-bit encryption and support a wide range of VPN protocols. They also exist in safe jurisdictions and maintain strict no-log policies.

The most notable similarity is the price. Though ExpressVPN’s $12.95/mo starting price makes it slightly higher than TigerVPN ($11.99/mo), it gives the best value with tons of extra features.

Verdict: ExpressVPN is the best alternative to TigerVPN, especially in the premium price range. With TigerVPN charging nearly the same price for barely a fraction of ExpressVPN’s robust security and unblocking features, the choice is clear.

Surfshark’s network of over 3,200 servers in 65 countries makes it another great value. Surfshark also has many of the security and privacy features absent from TigerVPN, particularly an internet kill switch and obfuscation.

The only similarity between the two VPNs is their simple, user-friendly interfaces. Unlike TigerVPN, however, Surfshark’s simplicity is due to good design rather than a lack of features or settings.

Verdict: Surfshark is an excellent VPN provider and an overall great value compared to TigerVPN, especially given its unlimited simultaneous connections and similar performance to ExpressVPN.

NordVPN’s network of 5,500 servers in over 60 countries beats TigerVPN and surpasses the server counts of the other providers on this list. With so many servers spread around the world, NordVPN users enjoy exceptional speed and performance.

Security features are also top-notch, offering the same AES 256-bit encryption and similar security features as ExpressVPN and Surfshark. Even if NordVPN had noticeably fewer features, it’d still be a better value than TigerVPN.

Verdict: NordVPN is another great alternative VPN solution to TigerVPN, especially for users who want the high speed and performance guaranteed by a vast server network.

Unfortunately, TigerVPN comes at a really poor value, and we can’t recommend it.

Despite some solid privacy features, TigerVPN fails in almost every other category. With virtually no features sold at a price rivaling even the most expensive VPNs on the market, it’s nearly impossible to justify subscribing to TigerVPN.

Thankfully, with great alternatives like ExpressVPN, NordVPN, and Surfshark, it’s also nearly impossible not to find a better value.

To learn more about the world’s leading VPNs, check out our VPN reviews page.

TigerVPN Review: Private But With Drawbacks