SlickVPN’s landing page certainly lives up to the term “slick.”

From an introductory video starring the world’s least intimidating hacker to branding-friendly feature names like HYDRA, it’s as slick as homepages come.

But cracks start appearing on a closer look. For example, SlickVPN claims it can prevent third parties from “buffering” your online activity.

We don’t want to judge a VPN by its cover, though. What really matters is whether SlickVPN can keep you safe.

Can this VPN keep you protected and anonymous online? And if it can’t, what other options do you have?

Learn all this and more in our comprehensive SlickVPN review.

How do you use SlickVPN?

SlickVPN is a virtual private network available for both desktop and mobile devices. You can use it to keep people from snooping on your online activity.

Lots of people want to know what you’re doing online. Even more than that, they’d love to connect your online activity to your offline identity. Hackers are after your passwords, corporations want to send you invasive ads, and governments spy on individuals in the name of “security.”

A VPN shields you from prying eyes by masking your IP address (the digital “fingerprint” assigned to your online activity) and encrypting all your data into impenetrable code.

To use one, just download a VPN app to your chosen device, connect to one of the servers in its network, then browse the Internet as normal. Ideally, you’ll trade a little browsing speed for a lot of safety. 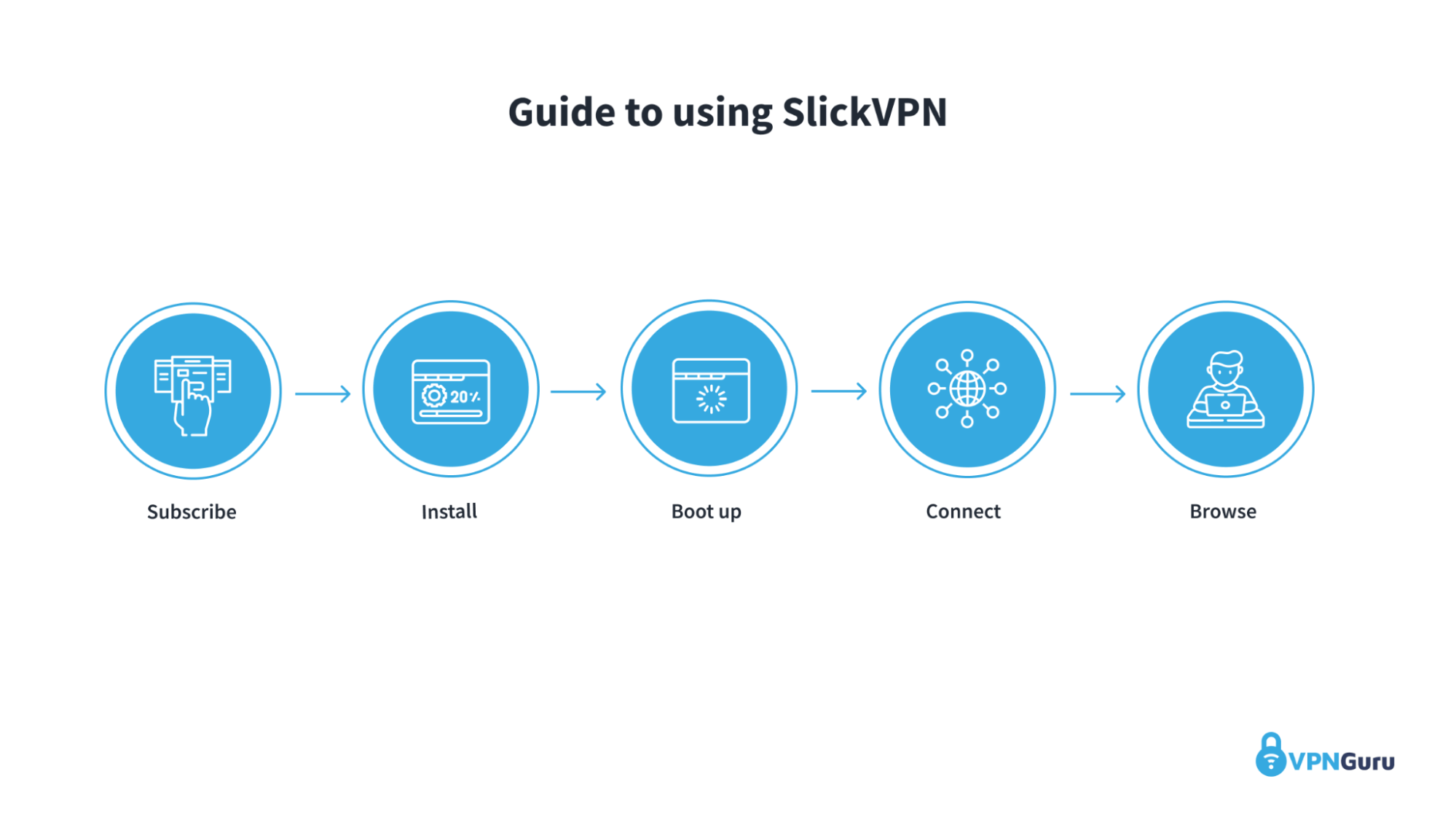 In other words, whenever we test a VPN, we ask two fundamental questions: can it keep you safe, and can you use it without ruining your browsing experience?

Let’s see whether SlickVPN can get to “yes” on one or both of those counts.

Many aspects of SlickVPN hold together decently. Here are five reasons this VPN service might deserve your attention.

This map, available within the SlickVPN desktop app, shows most of the places where it has servers. Several in East Asia and Oceania are off the right side of the screen.

The size of a VPN’s server network is important because the closer you are to a server location, the better speed and performance you’ll get — not entirely unlike how your Wi-Fi signal gets worse on the other side of the house from your router.

SlickVPN has about 150 servers in locations spread across 40 countries. Although the number of locations is decent, the total number of servers can’t come close to many of the world’s top VPN services. NordVPN alone has more than 5,200 servers worldwide. On top of that, there are no SlickVPN servers in Africa and only three in Latin America.

When a VPN protects you, nobody (ideally) can see anything you do online. But even with perfect security, the VPN company itself may be able to find your IP address and follow your browser activity.

SlickVPN does not save logs of any user activity. It only collects as much information as it needs to give each user a separate account, along with a few trackers that only operate on its website. If it’s ever legally obligated to cooperate with authorities, there won’t be any information to give.

Of course, you shouldn’t just take the VPN’s word for it. We searched for news stories that might hint at SlickVPN breaking its privacy policy but came up empty. SlickVPN also doesn’t have a parent company, so it’s not answerable to a higher corporate power.

A VPN protocol is a set of instructions and algorithms that help a VPN server establish a secure connection to an unprotected client. There are a few different protocols, but OpenVPN is generally agreed to be the best.

OpenVPN only has two real challengers. The first is WireGuard, which is similar to OpenVPN but less susceptible to bugs and lag. Surfshark and Private Internet Access support WireGuard, while NordVPN has built its exclusive NordLynx protocol on top of the new system.

Then there’s Lightway, an exclusive protocol built by ExpressVPN. Lightway may be the fastest protocol we’ve ever seen, and it’s definitely secure; it’s also open-source.

WireGuard and Lightway are exciting, but OpenVPN has one minor advantage: it’s undergone more testing. It’s an open-source protocol that has held up against attacks for over 15 years, so we know exactly how well it performs in the real world.

SlickVPN supports two types of OpenVPN: UDP (faster but might fail to connect in some situations) and TCP (more secure but slower). It might seem like there aren’t many options, but these two are really all you need.

No matter your reason for torrenting, you’ll find a helpful ally in SlickVPN. There are no limits on P2P file sharing through any of its servers.

Some VPNs, such as CyberGhost, provide special P2P servers optimized for torrenting. That’s a valid approach, but SlickVPN’s method is also good: building every server in the VPN to (ideally) facilitate as many activities as possible.

A kill switch is a must-have feature for any VPN. It protects you from accidentally exposing your personal information online. If your VPN connection drops while the kill switch is active, the VPN client cuts off your internet access until the VPN is back online.

SlickVPN calls its kill switch “IP and DNS leak protection,” but it works the same as other kill switches you may have seen. In our tests, it worked every time, refusing to let us online until we reconnected to the VPN.

Make sure you know whether or not you have this enabled. If it’s off, you risk exposing your data and activity to your ISP.

Although SlickVPN checks a lot of the necessary VPN boxes, it doesn’t do much else. For these five reasons, you might want to give it a miss.

Normally, we run several tests with the VPN service active. We look for the VPN’s impact on your browsing speed, its ability to get into streaming services, and other important traits.

We weren’t able to do a speed test or any other test this time. We could not connect to any of SlickVPN’s servers. No matter where we tried to connect, from Canada to Greece to Japan, we were always disconnected within seconds.

Notice how this activity log, embedded directly in the SlickVPN app, shows two involuntary disconnections within 30 seconds. It seems that there’s no way to reliably connect to this VPN.

We strongly advise that everyone use a VPN whenever they’re on the Internet. But we also understand that many web users aren’t naturally tech-savvy. That’s why we give a lot of weight to customer support.

SlickVPN’s customer service options are nearly non-existent. There are a few setup guides and an FAQ that barely touches on troubleshooting.

Worst of all, there’s no live chat — not even a bot. To get personalized help, you have to fill in the form pictured above and wait for someone to get back to you.

To give SlickVPN some credit, a team member really does respond within 24 hours with a helpful reply. But it’s hard to not be able to get live help when you need it.

SlickVPN offers OpenVPN, which is all a VPN really needs. However, on macOS and iOS, it supports another protocol that it just calls “IPsec.”

The problem is that IPsec isn’t a VPN protocol. It’s an encryption algorithm that gets paired with VPN protocols, usually (but not always) L2TP and IKEv2. “IPsec” by itself doesn’t give us enough information to determine if the protocol can be trusted. It’s important not to confuse or misdirect users with your security options.

We’re big fans of new, envelope-pushing protocols, like ExpressVPN’s Lightway. But if a VPN has developed a new protocol of its own, we’d rather know that straight out. With Lightway, NordLynx, and the others, we know exactly what they are and where they came from.

Compounding all its other problems, SlickVPN’s user interface is oddly designed and difficult to use. When compared to our favorite UIs, like CyberGhost and Zenmate, it just doesn’t hold up.

The list in that screenshot is the only way to choose between server locations. There’s no search bar, and the map tab is non-interactive. The only way to find a server is to scroll manually through the list — which, by default, is bafflingly organized in reverse alphabetical order by the names of cities. You can change this with an arrow that’s barely visible.

The problems in the server list are a microcosm of the issues plaguing the whole app. Tabs go nowhere, features are muddled, and everything feels over complex and threadbare at the same time.

How much does SlickVPN cost?

SlickVPN offers three pricing options. You can pay once a month, every six months, or for a whole year at a time. Each plan includes all of SlickVPN’s features.

Customers have a choice of three payment methods: PayPal, credit card, or Bitcoin. It’s always nice to have the more secure cryptocurrency option, though we’d like to see SlickVPN move beyond Bitcoin and accept other types of cryptocurrency.

SlickVPN doesn’t have a free VPN plan. There’s also no free trial, but there is a 30-day money-back guarantee. After writing this review, I took advantage of the guarantee, and they gave me a refund with no questions asked.

As welcome as the long refund period is, though, SlickVPN is noticeably overpriced for what it provides. A year of NordVPN, a much better service, costs just $11 more, while about $60 gets you two full years of the equally superior Surfshark.

In our opinion, SlickVPN should have embraced the status of a discount VPN provider. It simply charges too much to have all the flaws we encountered.

What are some SlickVPN alternatives?

If you’ve decided that SlickVPN isn’t the service you’re looking for, check out these six SlickVPN alternatives.

ExpressVPN is our favorite VPN. It’s everything SlickVPN fails to be: user-friendly and feature-rich. It’s also the VPN that most consistently unblocks Netflix and other streaming sites.

Surfshark is our usual runner-up for best VPN. While not quite reaching the heights of ExpressVPN, this relative newcomer is constantly growing and improving. It’s an excellent choice if you’re on a budget.

NordVPN is a high-quality alternative VPN that boasts excellent speeds and a large server network. It’s a strong option for breaking through streaming platform firewalls.

CyberGhost is packed with interesting, unique features. It combines a sleek interface with granular features for the security expert, all for a fair price.

Private Internet Access, also known as PIA, is the other best VPN for users on a budget. It offers incredibly cheap long-term plans that don’t skimp on features or performance.

Zenmate is new to the VPN scene, but like Surfshark, it’s one we’re excited to watch. With improvements coming in regularly, now’s the time to check Zenmate out.

Unfortunately, there aren’t any cases in which we’d recommend SlickVPN. VPN software that can’t connect to its own servers is like a car stuck permanently in the park. There’s just no use for it.

Fortunately, today’s VPN users have plenty of better choices. From the premium-quality ExpressVPN to the high-performing Surfshark, there’s no reason for you to be left out in the cold.

Check out any of our top six alternatives to SlickVPN by clicking the links in the previous section. You can browse even more VPNs on our full reviews page.

If you’ve got a favorite we didn’t mention, let us know in the comments. Thanks for reading!