ProtonVPN Review: Is It Actually Free?

ProtonVPN has one of the most compelling origin stories of any VPN service out there. Its founders met at CERN, the Swiss mountain laboratory famous for the Large Hadron Collider and early versions of the Internet.

The team of scientists and software engineers realized they shared the same concerns about the decline of online privacy. In 2014, they launched ProtonMail, an email service protected by zero-access encryption (even the company can’t break it).

Then they wanted to go further. They had a vision of a crowdfunded, community-supported virtual private network with a robust free plan. That turned into ProtonVPN.

But can you get true online security from the free version of ProtonVPN? And despite its origins, is this VPN provider really trustworthy? Our ProtonVPN review has the answers.

ProtonVPN is a virtual private network (VPN) designed to help its users protect their privacy.

When you connect to the internet, your internet service provider (ISP) assigns an IP address to your router. It serves as a unique “fingerprint” to identify you online.

Your IP address makes it possible to view websites and do everything else you do on the Internet. But it also means people can identify what you, personally, do online. That includes people like advertisers, scammers, hackers, and even stalkers.

ProtonVPN hides your IP address by connecting you to a secondary server before moving on to your destination. If anybody tries to spy on you, they’ll see ProtonVPN’s server address instead of yours.

That’s not all ProtonVPN does to protect your personal information. It also encloses all your online activity in an encrypted tunnel. “Tunnel” means that everything you send is encrypted from the moment it leaves the VPN server until the moment it reaches your intended destination. There’s no weak point where interlopers can see your data.

How to connect to the Internet with ProtonVPN

To use ProtonVPN, download and install the version of the app that matches your device and OS. Follow the instructions on the screen to get the app running. 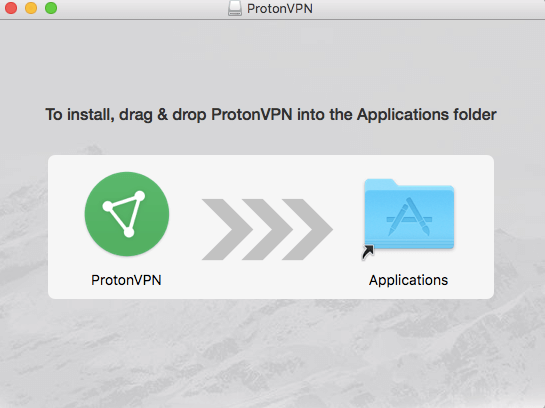 After that, all you’ll have to do is open the app and connect to a server. In the app’s main control panel, click on “Quick Connect” or a specific server location to connect to a VPN server there. 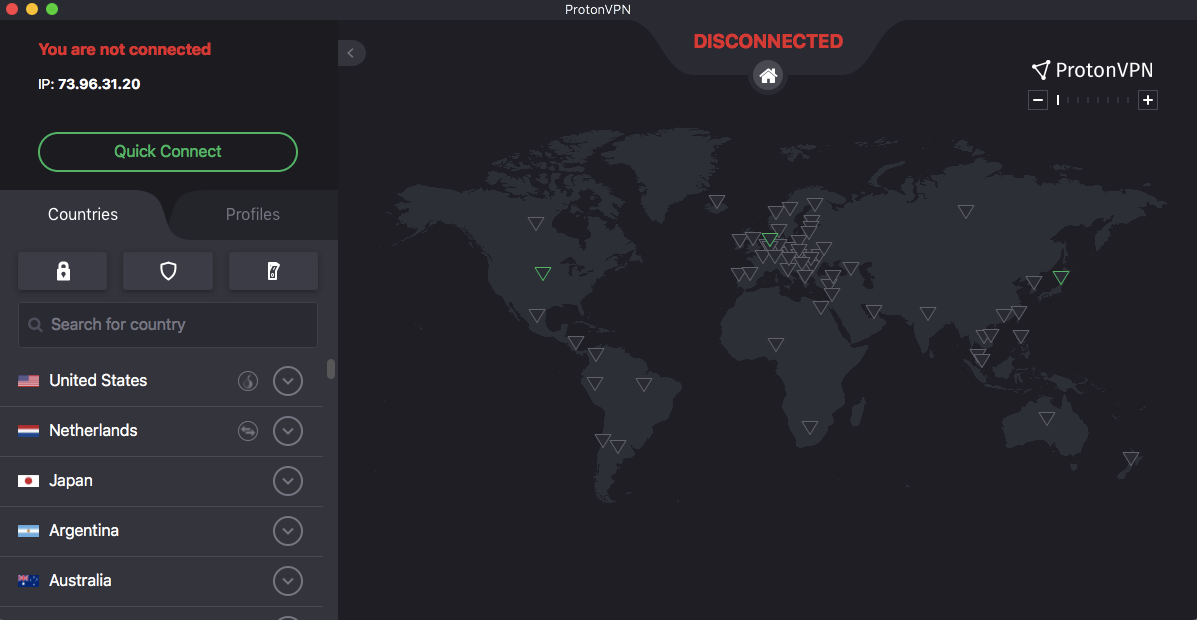 ProtonVPN offers a few other features that bolster and support its VPN servers. A Secure Core server routes data through multiple nodes before moving it on, making it much harder to follow traffic back to its origin. NetShield blocks ads, trackers, and malware. There’s also a kill switch (see the next section for details). 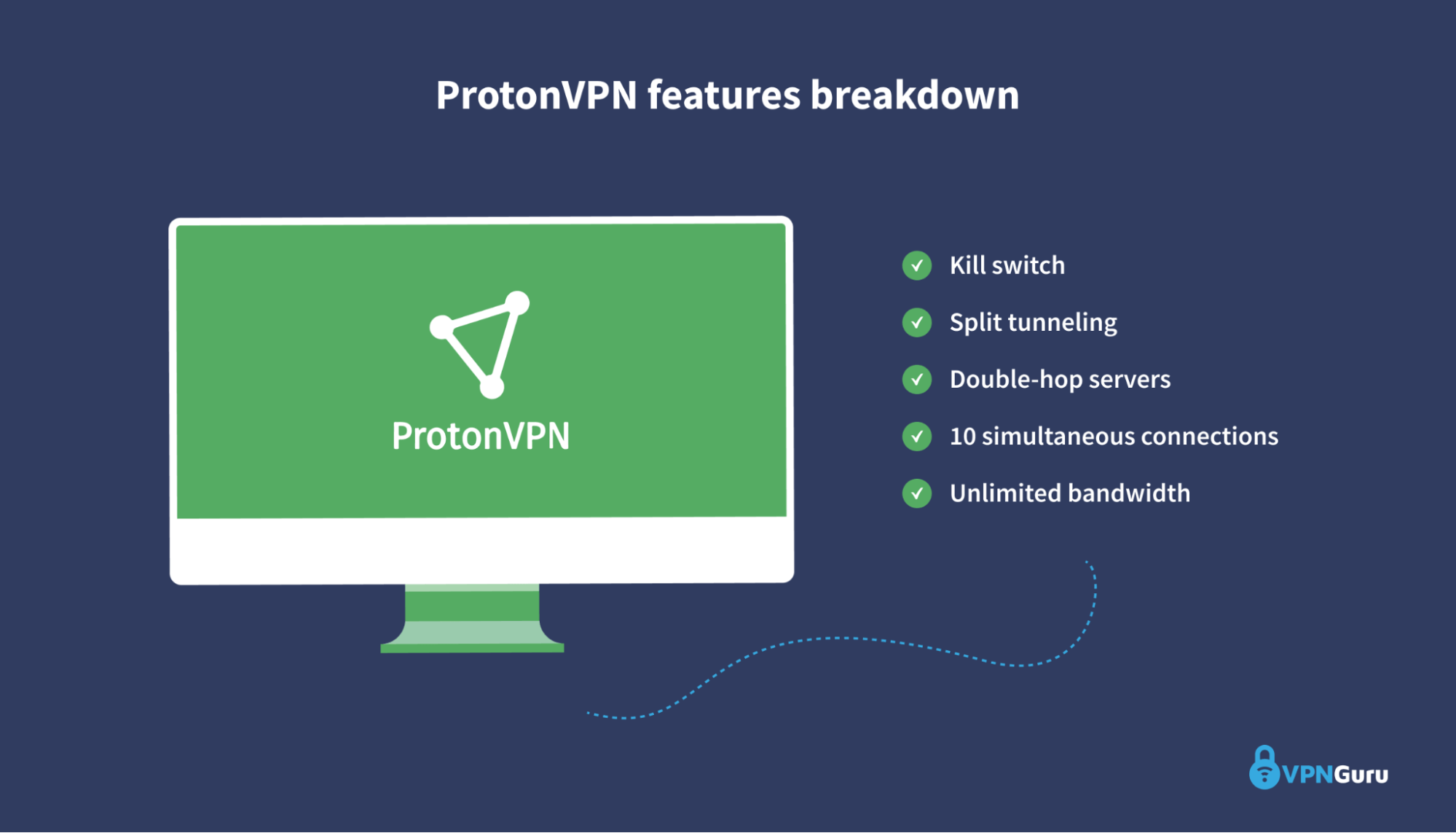 The team also says that its unique VPN Accelerator technology increases speeds by over 400%, but our speed tests didn’t bear out that claim (more details below).

Many VPNs claim to offer a free plan but restrict traffic on that plan so tightly that it’s basically useless. Try streaming a single episode of a Netflix show on TunnelBear’s 500 MB per month option, and you’ll see what we mean.

ProtonVPN takes a different approach. It doesn’t limit traffic or bandwidth to entice users to switch to the paid plan. You can use the free ProtonVPN app as much as you want without paying a cent.

Be aware, though, that ProtonVPN limits aspects of the service besides traffic. You can’t use Secure Core servers or the NetShield Adblocker without a paid subscription. The vast majority of the server network is also off-limits.

At least you can still use the kill switch. This nifty feature cuts off your internet connection if your connection to the VPN ever drops, saving you from accidentally broadcasting sensitive data.

Depending on your needs, you can get a complete VPN service for cheap instead of a limited one for free. If money is an object, many affordable VPNs provide premium features, like Surfshark and Private Internet Access.

A VPN protocol is a language used by VPN servers to communicate with outside servers and home devices. In addition to helping servers talk to each other, the security protocol provides a platform for encryption.

ProtonVPN only supports three VPN protocols: OpenVPN, WireGuard, and IKEv2. All three of these protocols are fast and have strong security records. Two of them (OpenVPN and WireGuard) are open source, with volunteer coders constantly probing for vulnerabilities. IKEv2 is proprietary to Microsoft, but it’s still fast and reliable.

When it comes to VPN security, fewer options can actually be a good thing. Many VPN providers want to advertise that they have a lot of protocols, so they’ll include extras that are either inferior (L2TP) or downright dangerous (PPTP).

Unfortunately, ProtonVPN doesn’t come with an exclusive protocol to match ExpressVPN Lightway or NordVPN NordLynx. Both of those protocols are much faster than OpenVPN while maintaining security.

ProtonVPN has its HQ in Switzerland, a country with strong data protections for individuals. The European Union’s General Data Protection Regulation adds another layer of enforcement.

It also comes with a no-log policy that’s clear and straightforward without carving out needless exceptions. You even have the option to opt-out of having your connection routed through countries with repressive governments.

Because certain shows are only copyrighted in specific countries, streaming services risk violating their licensing contracts if people from other countries watch those shows. Netflix, Hulu, Amazon Prime, BBC iPlayer, and others block all VPNs to prevent them from circumventing the walls that restrict content to certain audiences.

The best VPNs, especially ExpressVPN, can get around these blocks by scrambling their metadata, so they don’t look like VPNs at all. In our tests, ProtonVPN proved to be excellent at getting through streaming blocks. We were able to watch content from Netflix, Hulu, Amazon Prime Video, Disney+, and more.

Sadly, due to its lackluster speeds, ProtonVPN wasn’t always a great choice for actually watching the videos. For access and performance, we recommend ExpressVPN, CyberGhost, or Zenmate.

ProtonVPN is intensely focused on privacy. Protecting private citizens brought its founding team together at CERN, and this remains its foremost concern.

But the focus on anonymity comes with a trade-off. To keep the VPN as private as possible, ProtonVPN has had to sacrifice speed. That’s in spite of its “VPN Accelerator,” allegedly a technological suite that lets users “browse the internet over 400% faster.”

To put this in perspective, we have to show you the results of our hands-on test. ProtonVPN didn’t just slow our speeds down, it obliterated them. 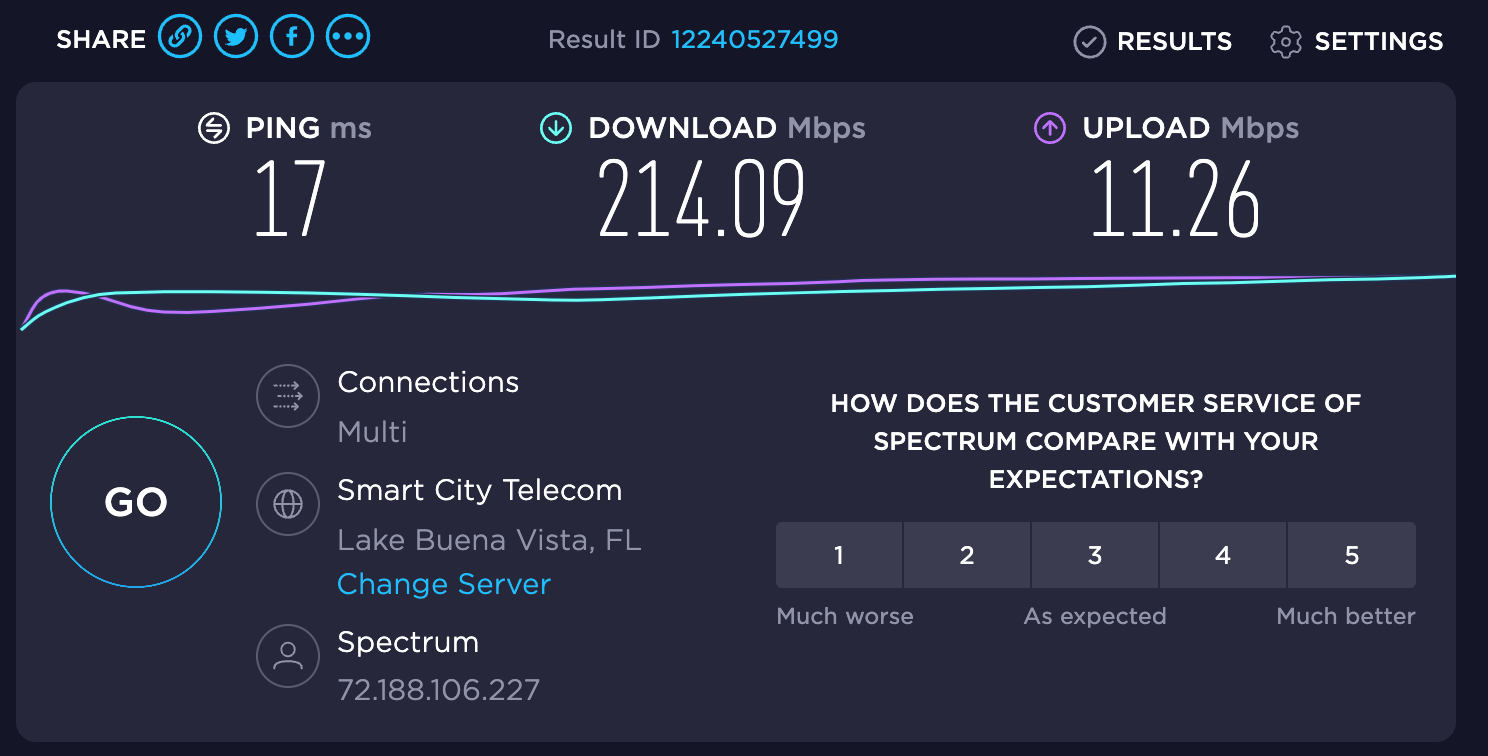 We started off from a server in Orlando, Florida, in the US, with no VPN connected. Our download speed was a more than respectable 214.09 Mbps, with a strong upload speed of 11.26 Mbps.

Now watch what happened when we connected to ProtonVPN’s server in Tokyo, Japan.

We tried to connect to a server in the US to get results a little closer to home, but the US server kept timing out. When we managed to connect to that server after several attempts, we couldn’t even open a website.

A VPN’s server network is important because servers perform better when you’re closer to them. The more server locations a VPN has, the better speeds you can access. The more total servers it has, the better it can handle heavy loads.

ProtonVPN has just over 1,300 servers in 61 countries. 1,300 servers is not that many, especially compared to ExpressVPN’s 3,000+ or CyberGhost’s 7,300+. That low number, spread out across 55 locations, could explain Proton VPN’s generally slow speeds.

Even worse, ProtonVPN’s servers are restricted to certain pricing tiers. On the Free plan, you’re locked out of all but 23 servers in three countries, less than 1% of the entire network. The Basic plan limits you to just over 350 servers in about 40 countries for $4 per month — far less value than Private Internet Access, which lets all subscribers use the whole network.

Only the Plus subscription, at $8 per month, allows you to use every ProtonVPN location.

In the last section, you got a taste of the ways in which ProtonVPN’s pricing structure is unnecessarily convoluted. Unlike most VPNs, ProtonVPN includes different features in different subscription tiers. 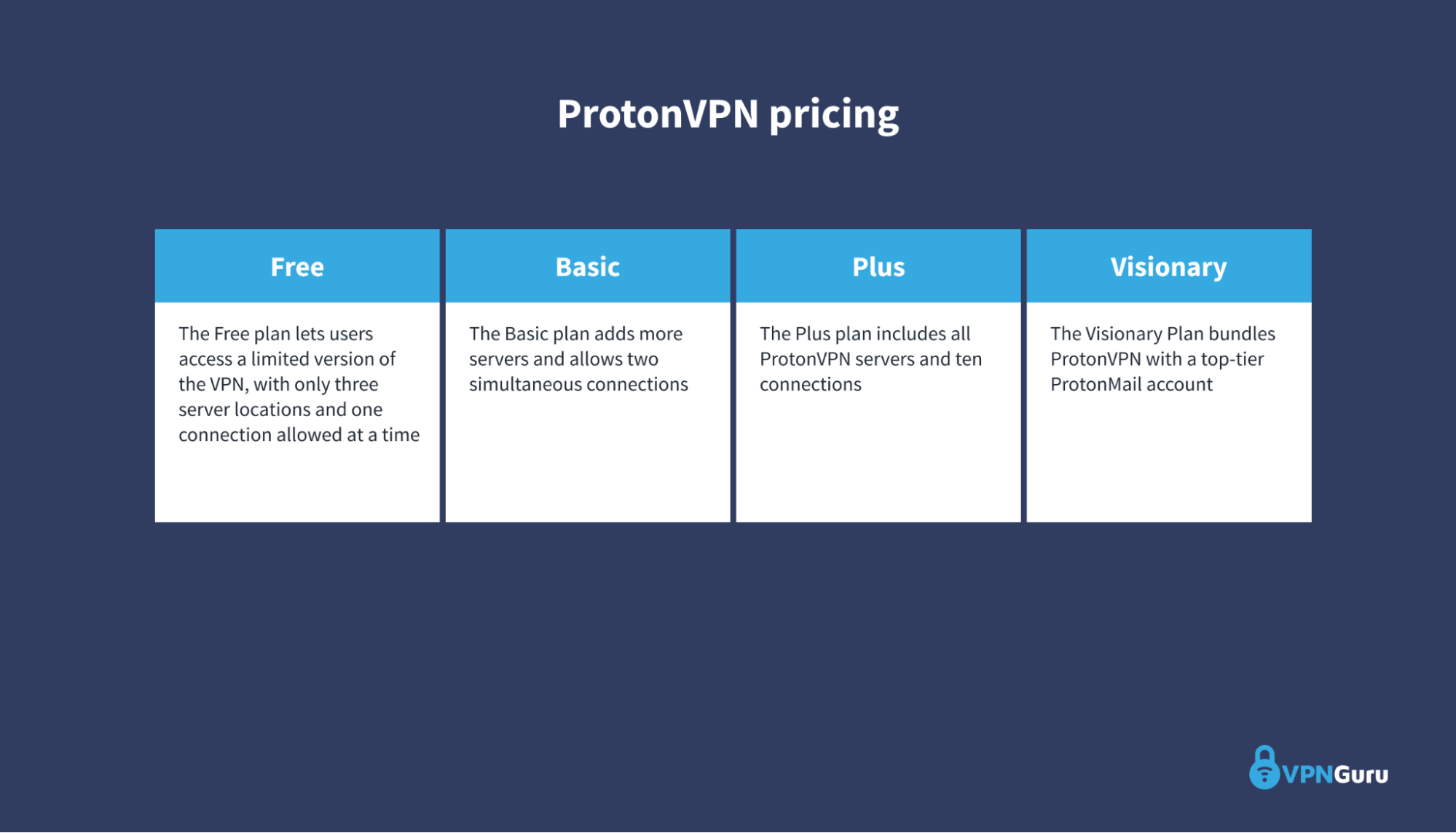 The Free plan lets users access a limited version of the VPN, with only three server locations and one connection allowed at a time. The Basic plan adds more servers and allows two simultaneous connections. The Plus plan includes all ProtonVPN servers and ten connections. Finally, the Visionary Plan bundles ProtonVPN with a top-tier ProtonMail account.

ProtonVPN also states that cheaper connections have lower speeds, but doesn’t explain how or why. Intentionally slowing down its own VPN service seems like it’s working against the mission of defending privacy rights.

Every subscription is available in three durations — monthly, annual, and biannual — meaning there are ten total prices you might end up paying for ProtonVPN. It made us miss the extremely lucid structures you get with Zenmate and Surfshark.

Hard to get customer support

ProtonVPN’s knowledge base is difficult to navigate. Most of the articles are well-written, but the design makes them hard to parse, and many troubleshooting articles boil down to “there’s nothing we can do about it.”

There’s also no option for live chat. You can submit a ticket to the ProtonVPN team, but you’ll have to wait to hear back.

The best support comes from the ProtonVPN subreddit. The regulars there know what they’re talking about, but it’s an intimidating place for some users. Besides, VPNs shouldn’t offload their troubleshooting to unpaid volunteers.

ExpressVPN has the friendliest, most helpful customer support options we’ve ever seen, but NordVPN is a close second.

We’ve already covered a lot about ProtonVPN’s pricing structure, but in this section, we’ll lay it out clearly so it’s easy to reference. ProtonVPN has four subscription tiers, each of which (except the free subscription) comes in three durations.

Each higher tier gives you access to more features.

ProtonVPN may not be the right choice for you if you need quick speeds, clear support, or user-friendly pricing. Try one of these six alternatives instead.

ExpressVPN is our favorite VPN. It’s just as committed to privacy as ProtonVPN, but it’s also much faster and offers users more flexible choices. It comes with a kill switch and adds other features ProtonVPN lacks, like split tunneling.

Surfshark is another stellar VPN service. It has more than twice as many servers as ProtonVPN, plus better speeds.

NordVPN is extremely fast, has a wide network, and boasts a great privacy record, including rapid responses to vulnerabilities.

CyberGhost has an easy-to-use desktop application, and it’s highly affordable. It has a deep set of features, plus dedicated servers for streaming and torrenting, which ProtonVPN lacks.

Zenmate is a relative newcomer that has fantastic speeds on almost all its servers, including enough download speed to watch HD video.

ProtonVPN is far from the worst VPN we’ve ever tested. It’s a great option for those focused on privacy. The problem is that other VPNs take everything ProtonVPN does and do it all better.

VPNs don’t have to make a tradeoff between privacy and performance. If you want both, check out any VPN from our top six ProtonVPN alternatives.

ExpressVPN is the fastest, most secure VPN available to consumers. Surfshark and NordVPN also balance security features, speed, and accessibility. All of these are fantastic ways to protect your privacy.

ProtonVPN Review: Is It Actually Free?