Home > VPN Reviews > KeepSolid VPN Unlimited review: Is this VPN worth it?

KeepSolid VPN Unlimited review: Is this VPN worth it?

Even if you have “nothing to hide,” there are personal details about your life that you wouldn’t want others to know — login credentials, bank details, medical records, etc.

Anyone with these details can commit fraud or even sell them to third parties. So how can you keep your private information safe while browsing the web?

One solution is with a VPN or Virtual Private Network, a service that creates an encrypted connection between your device and the Internet.

While searching for ways to keep your online activities private, you may have heard of KeepSolid VPN Unlimited. It offers a robust set of security features and decent performance across its network.

But is KeepSolid VPN Unlimited right for you?

Read on to find out.

This KeepSolid VPN Unlimited review will cover everything you need to know to help you make an informed decision. We’ll also look at leading alternatives if you decide this VPN isn’t for you.

Is KeepSolid VPN Unlimited worth it?

KeepSolid VPN Unlimited is a solid VPN that lets you stay anonymous on the web and unblock popular streaming services. But there are some caveats to consider before you buy. 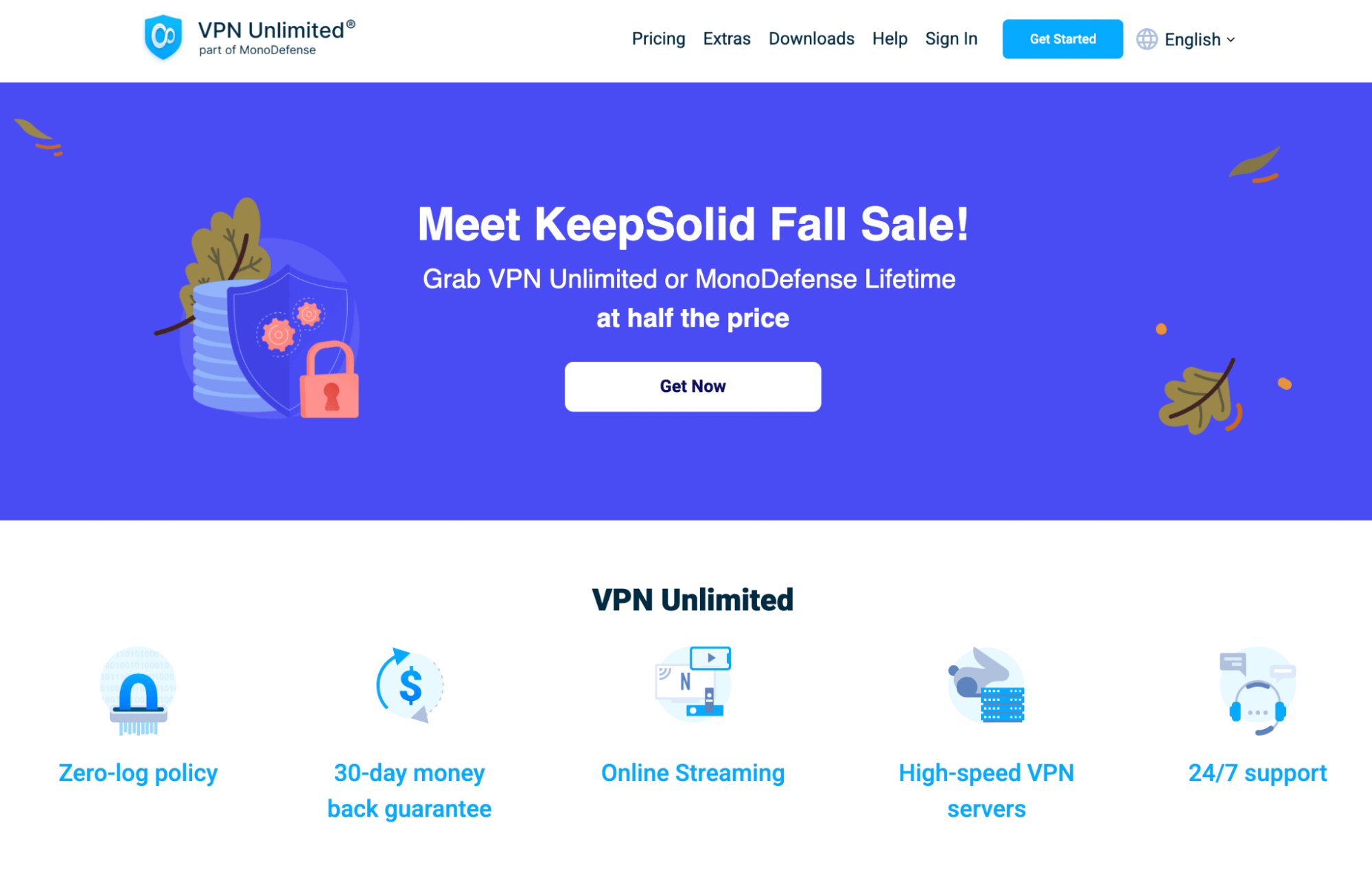 What We Weren’t So Sure About:

A VPN encrypts and routes your traffic. These extra steps can slow down your connection, but the impact on performance is barely noticeable when you choose a premium VPN provider.

KeepSolid VPN Unlimited operates over 500 servers across 80 locations. For reference, here are the regions and locations where KeepSolid has servers: 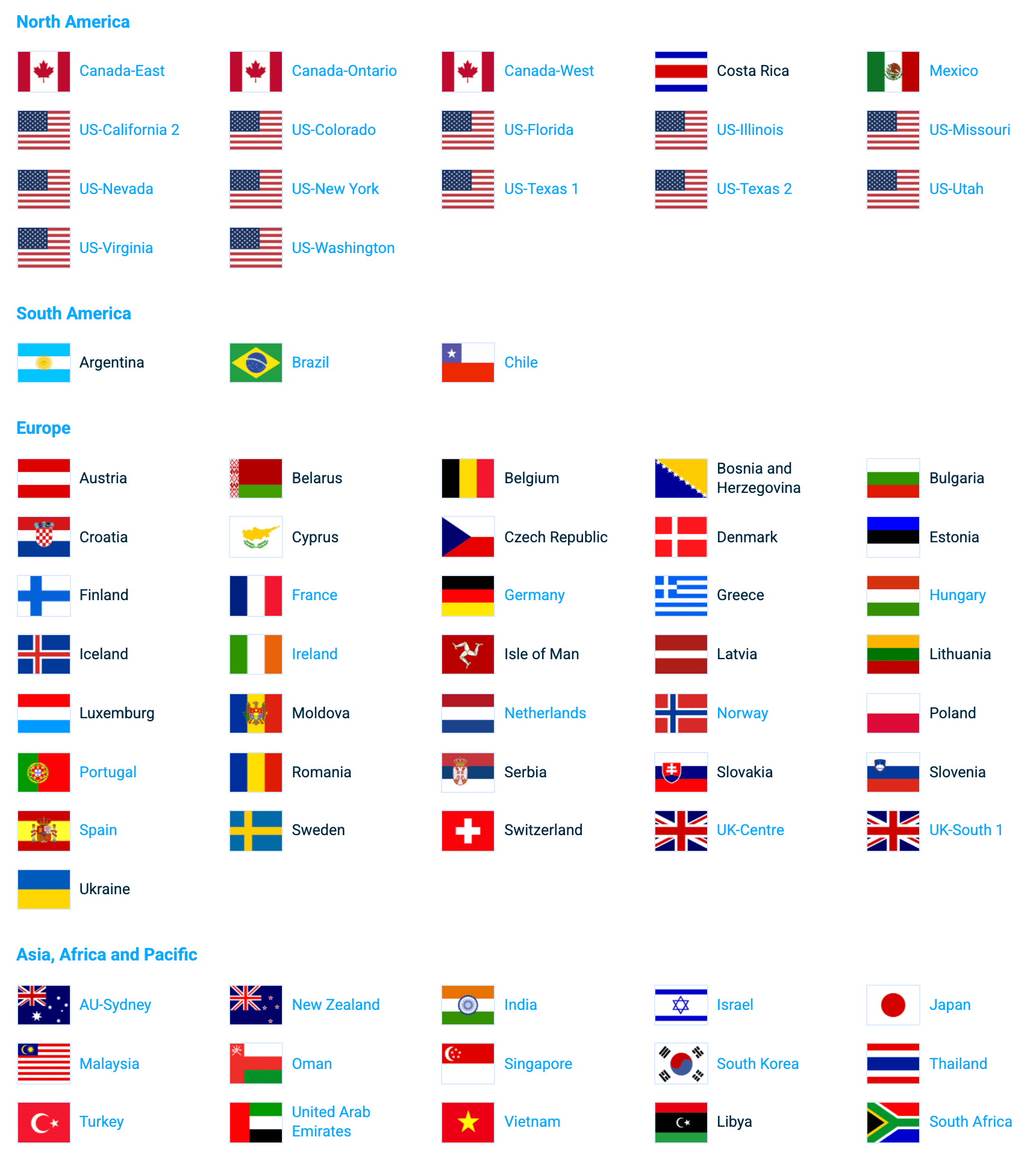 KeepSolid VPN Unlimited has a much smaller network compared to other VPN providers. To give you an idea, ExpressVPN operates over 3,000 servers, while NordVPN has over 5,000 servers in its network.

Even with its smaller server park, we liked that KeepSolid VPN Unlimited has servers in 58 countries (we counted). A good mix of locations gives you more servers to connect to when you’re traveling.

So how does KeepSolid VPN Unlimited perform?

We ran several tests using speedtest.net and compared the results — with active and inactive VPN connections. We also ran the same tests on different servers.

Before we dive in, keep in mind the performance you can expect depends on factors like your location, the current load of the server you connect to, the device you’re using, and even the operating system it runs on.

Then we connected to a server in the US (Denver, Colorado) and ran the speed test again. This time our download speed was 68.5 Mbps, and our upload speed was 3.31 Mbps.

Even with an 18.84% decrease in our download speed, we could still watch 4K video and browse the web without any problems.

KeepSolid VPN Unlimited also has an “Optimal” setting. As the name suggests, this option automatically connects you to the most optimal server based on your location.

In this case, we were connected to a server in Seoul, Korea (I wrote this review in Taiwan).

The results seem to suggest that selecting “Optimal” simply connects you to the closest server and not necessarily the fastest one.

Performance was extremely sluggish while on this connection. It took well over a minute for a single web page to load. We also loaded up a 4K video on YouTube, which kept buffering, as shown here.

KeepSolid VPN Unlimited claims it has “super-fast servers,” but our tests showed inconsistent results across its network. Some servers were extremely fast, while others slowed to a crawl.

The good news is switching between locations only took a few moments, and the connections were stable.

A VPN allows you to “spoof” your location. For instance, connecting to a VPN server in the US will make it appear as if you’re browsing from that location (even if you’re somewhere else). 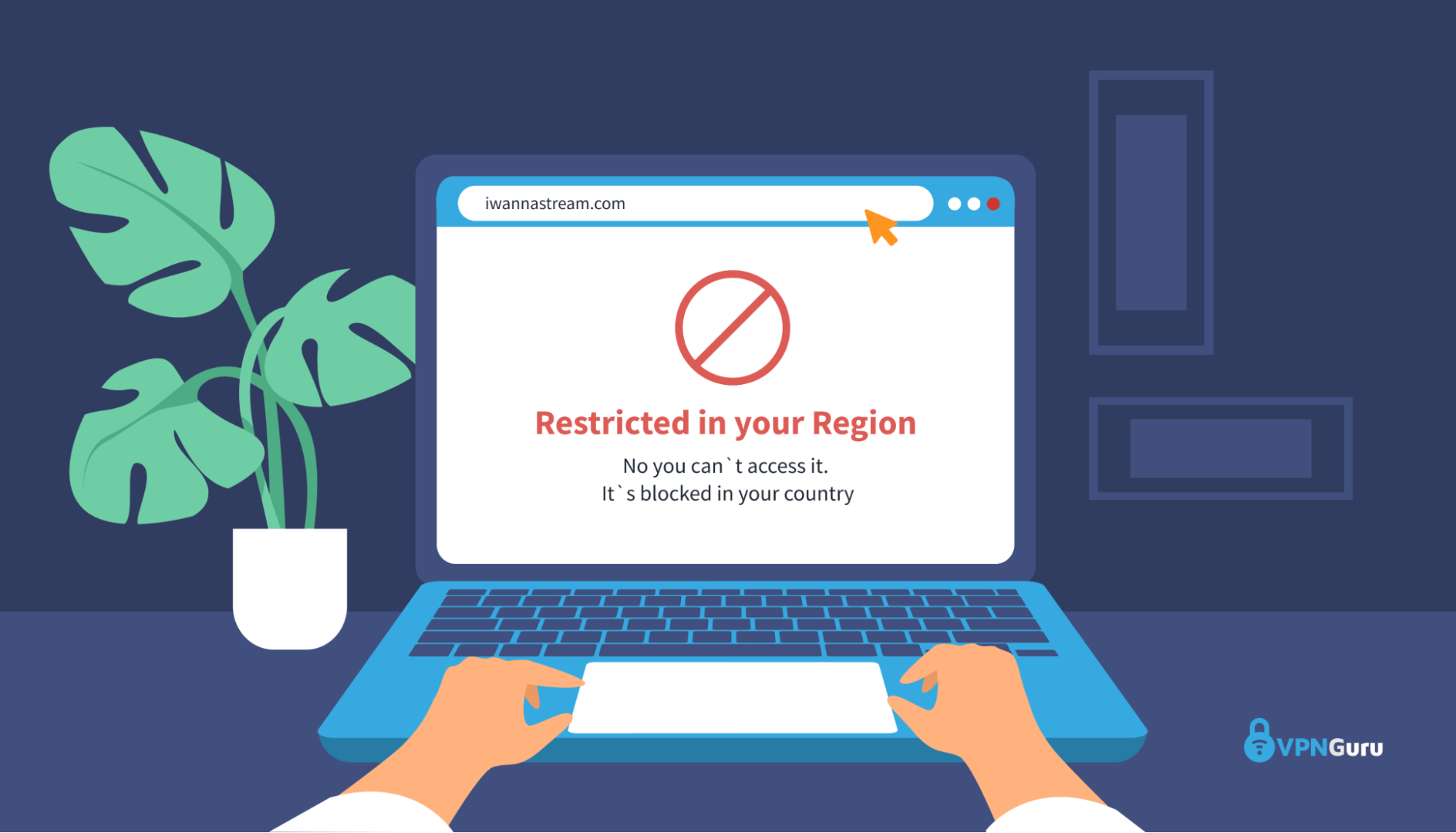 KeepSolid VPN Unlimited tells you which of its servers to use for streaming. This saves you the guesswork of figuring out which servers work. 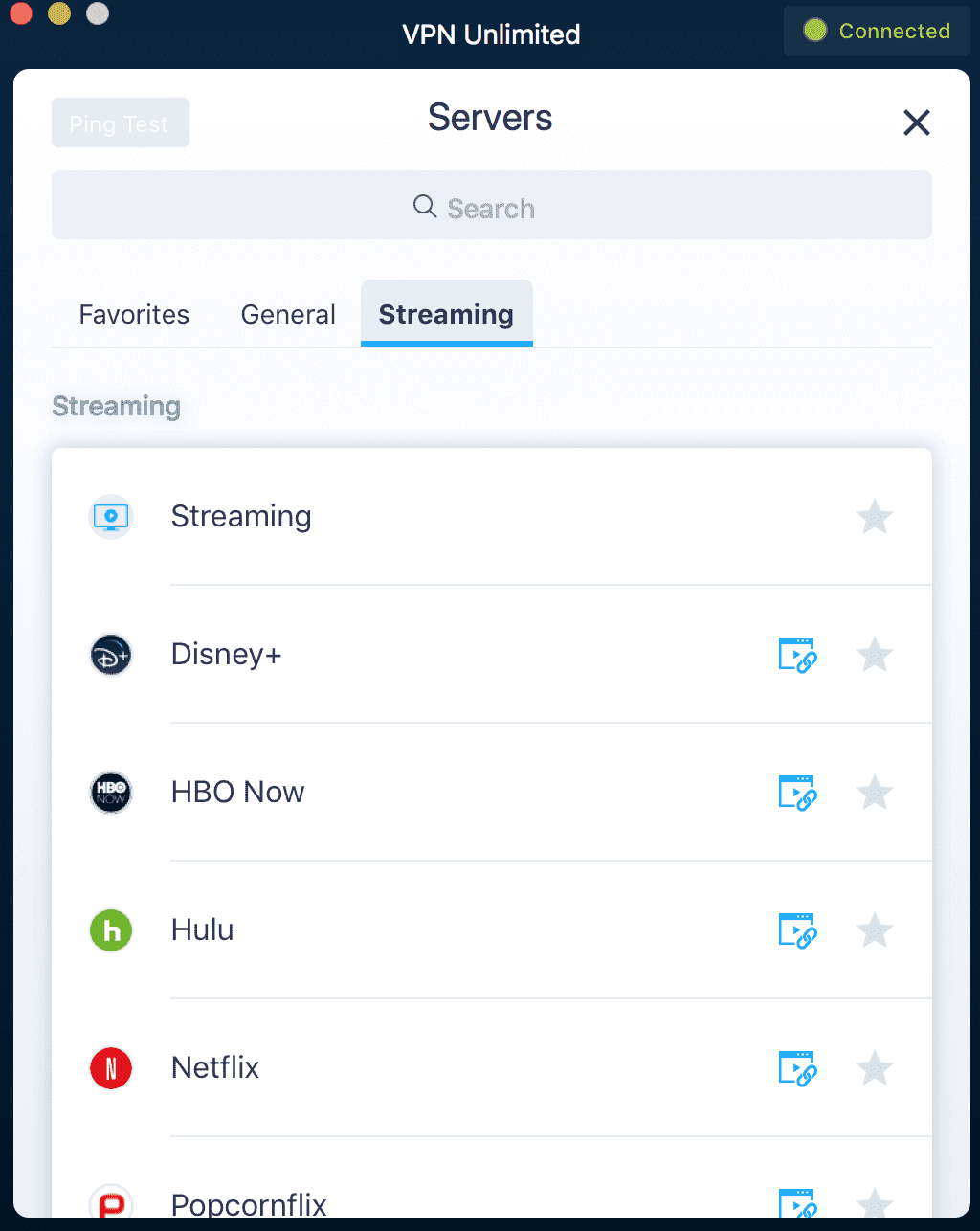 Still, we were happy to see KeepSolid VPN Unlimited work with some of the most popular streaming platforms (if you’re looking to access content on Amazon, check out our list of the best VPNs for Amazon Prime Video).

While torrenting is generally safe, it’s still a good idea to secure your connection to prevent others on the network from viewing your IP address.

KeepSolid VPN Unlimited supports P2P file sharing. There’s even a “P2P” tab in its desktop app that shows you a list of the servers that support torrenting. 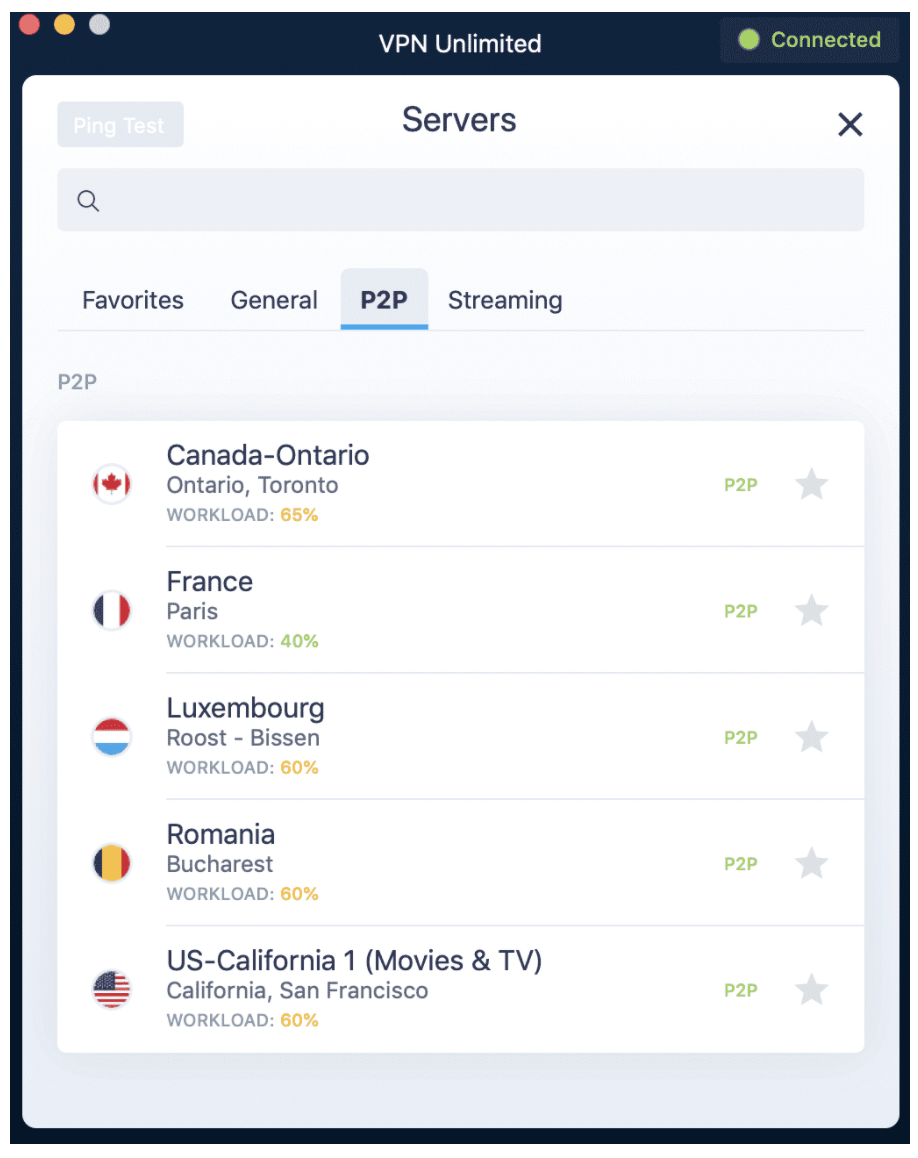 While the number of servers you can torrent from is limited to just five (Canada, France, Luxembourg, Romania, and the US), we had no issues downloading torrents in our tests.

A fast and reliable VPN isn’t the only thing to look for. A VPN that secures your traffic and protects your privacy is equally important.

This level of encryption makes it virtually impossible for anyone to view or track your activities online, even if you’re on a public Wi-Fi network.

A VPN protocol is a set of instructions that determine how an encryption tunnel is formed. It affects things like performance, stability, and security.

Here’s a comparison of the most widely used VPN protocols: 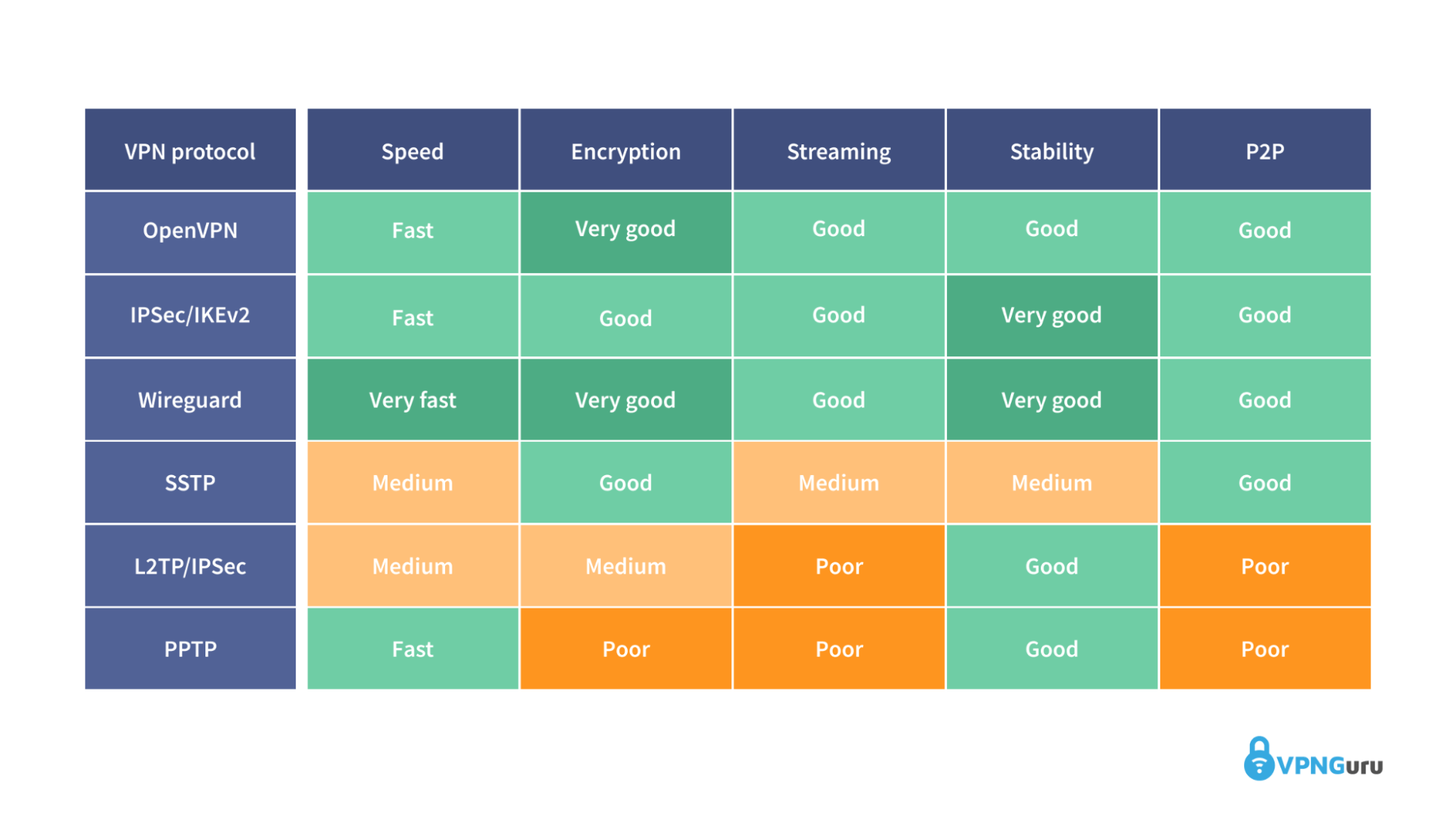 KeepSolid VPN Unlimited supports OpenVPN, WireGuard, and IKEv2 — all of which are highly secure and reliable protocols.

The company also offers its own KeepSolid Wise protocol, which disguises your VPN traffic as HTTPS traffic.

Using the KeepSolid Wise protocol helps you bypass any VPN blocks. This is useful if you regularly travel to countries with strict internet restrictions. 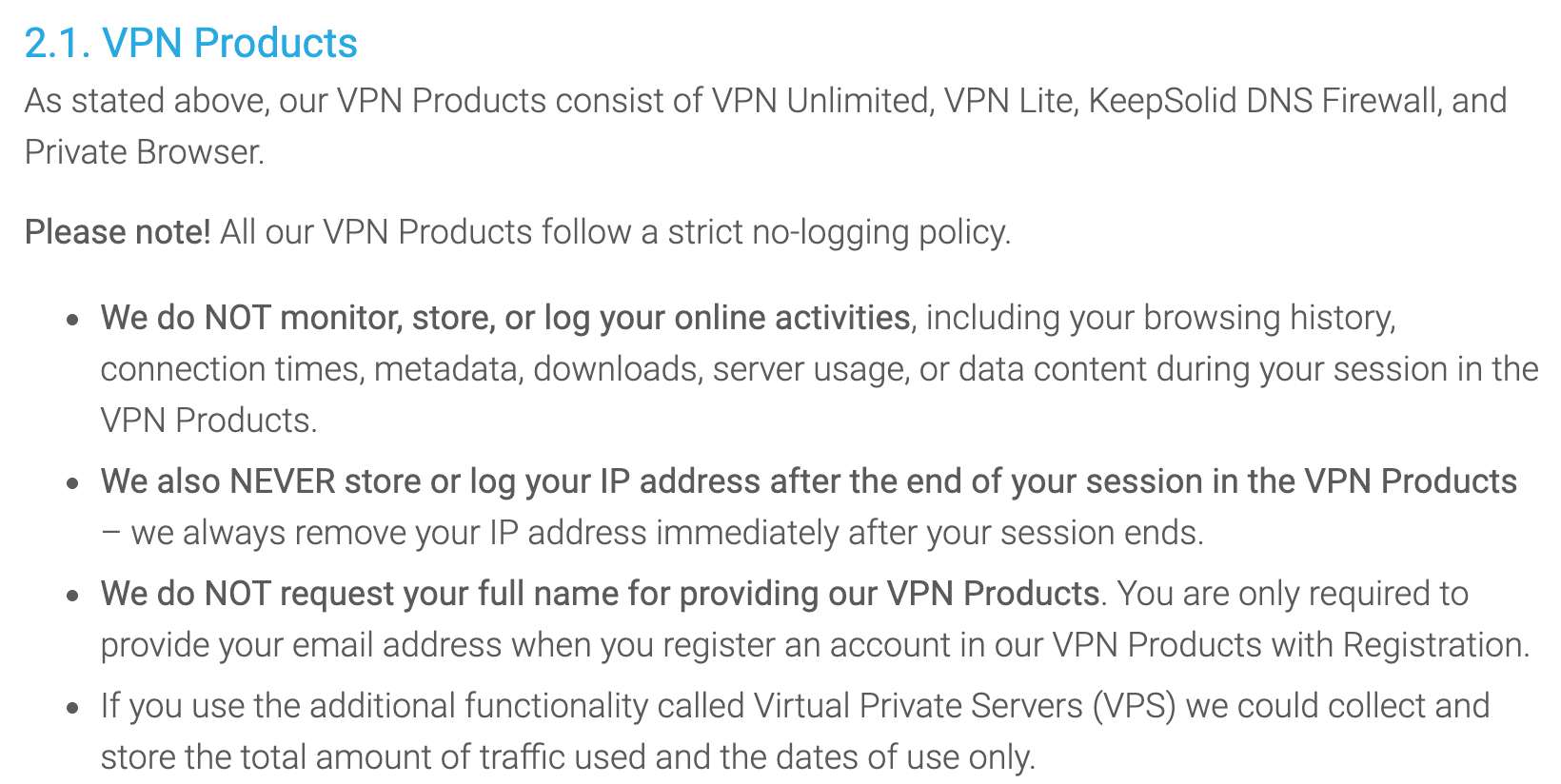 However, the company does log the following details when you use its VPN:

KeepSolid VPN Unlimited states that it immediately deletes these logs after you end the session, but not logging these details at all would be preferred.

The company is also headquartered in the US, meaning it can be compelled to hand over any data it has on you due to mandatory data retention laws.

If you’re looking for a VPN in a privacy-friendly location, we recommend alternatives like ExpressVPN. It’s based in the British Virgin Islands, which doesn’t have data retention laws.

A kill switch is a must-have feature in a VPN. If your VPN connection drops for any reason, it’ll automatically disconnect you from the Internet. This prevents your IP address and location from being exposed.

KeepSolid VPN Unlimited has a kill switch for Android, iOS, macOS, and Windows. It’s enabled by default on iOS and macOS, but you’ll have to enable it in your settings if you’re using Android or Windows. 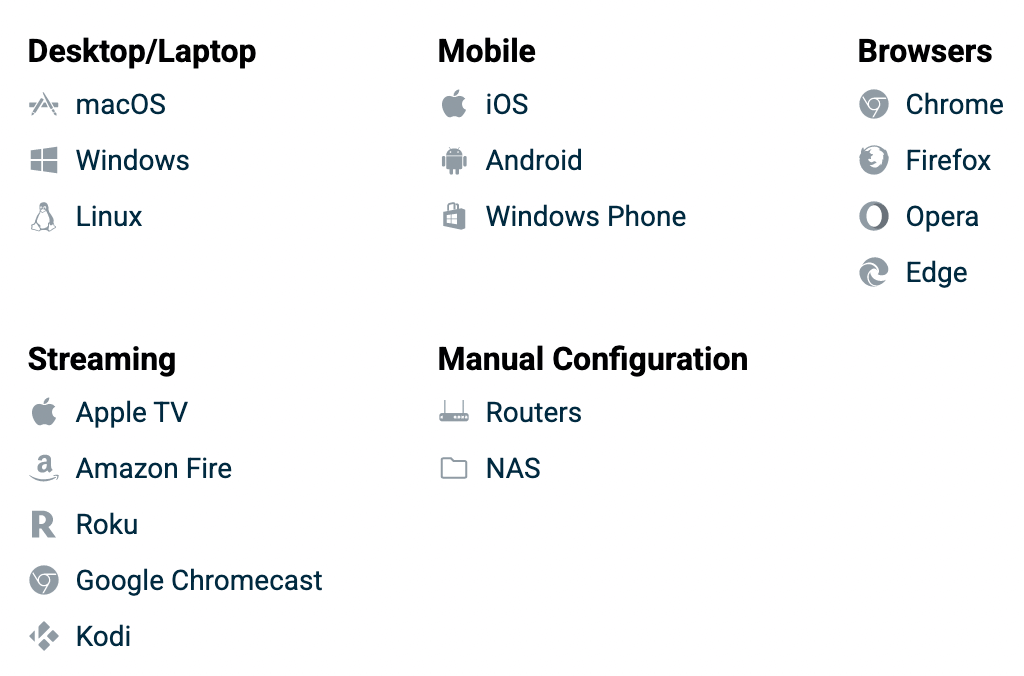 It supports up to five simultaneous connections. If that’s not enough, you can add five more to your account for an extra $2.99 a month.

KeepSolid VPN Unlimited offers comprehensive setup guides and manuals that you can refer to if you need help installing the VPN to your device or configuring the settings.

Here’s an example of a setup guide for installing the VPN client on macOS:

If you can’t troubleshoot an issue on your own, KeepSolid VPN Unlimited offers 24/7 email and live chat support.

All plans come with a 30-day money-back guarantee. You can pay via credit card, PayPal, and BitPay — a cryptocurrency payment service provider.

KeepSolid VPN also offers a seven-day trial, so you can test drive this VPN before deciding.

KeepSolid VPN Unlimited is a great choice for most VPN users, but you may want to consider other alternatives if you want to access a larger network and use split tunneling to route a portion of your traffic through a VPN.

ExpressVPN is one of the most highly-rated VPN providers in the world for several good reasons. It offers an extensive server network, strong encryption, and an independently verified no-logs policy.

Check out our ExpressVPN review to see why this VPN provider is our top pick.

NordVPN is another popular service in the competitive VPN space. It offers over 5,200 servers in 60 countries and uses industry-standard encryption to protect your privacy online.

Read our NordVPN review to learn more about this provider. 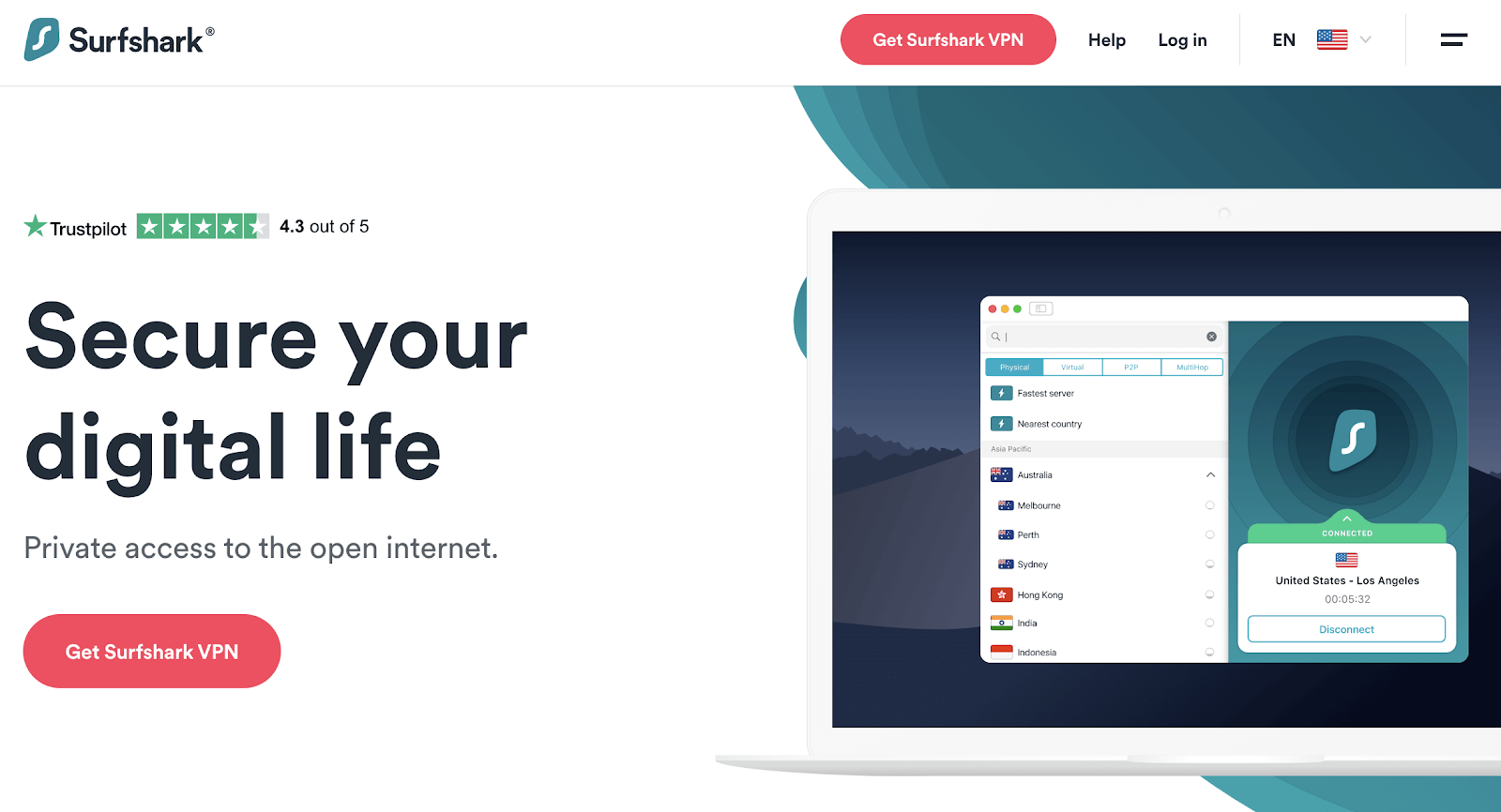 Surfshark is a fast and user-friendly VPN. It lets you connect an unlimited number of devices and offers a ton of security features that give you peace of mind as you browse the web.

Check out our Surfshark review to learn more about this award-winning VPN provider.

Click here to secure your internet traffic with Surfshark 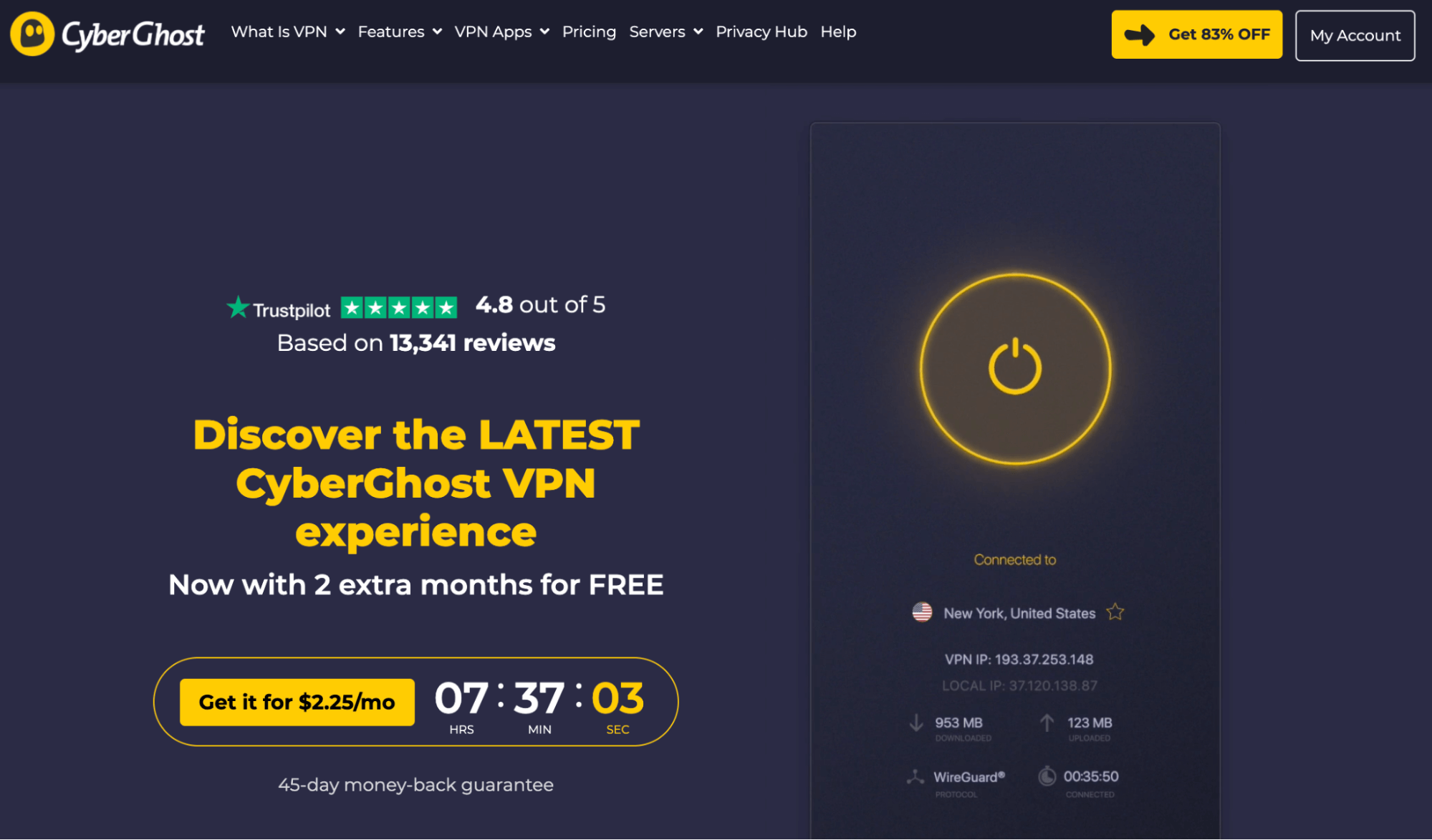 Check out our in-depth CyberGhost review for more details.

It uses industry-standard encryption and trusted protocols to secure your traffic. It also offers native apps for most platforms and unblocks streaming services like Netflix.

However, its network isn’t as extensive as other VPN providers, and some servers had sluggish performance. It’s also based in a country with strict data retention laws.

If you’re only looking for a VPN for low-stakes browsing, then we can recommend KeepSolid VPN Unlimited. But if you’re looking for a more robust solution, be sure to check out our VPN reviews to see what our experts recommend.

KeepSolid VPN Unlimited review: Is this VPN worth it?