Firefox VPN review: Is this Mozilla VPN worth using?

Mozilla, the company behind the Firefox web browser, has always taken online privacy seriously. It was probably inevitable that, at some point, Mozilla would build a VPN to go along with its popular browser.

In 2019, Mozilla launched Firefox Private Network into beta testing, renaming it Mozilla VPN for its official ship date of July 2020. We’ll refer to it as both “Firefox VPN” and “Mozilla VPN” throughout this review.

Firefox VPN is a paradox: one of the newest VPNs on the market, made by an established security company. Does Mozilla’s experience with Firefox translate into a good VPN service? Find out in our Firefox VPN review.

What is Firefox VPN?

Mozilla VPN is a virtual private network. Like other VPNs, it masks the user’s IP address, location, and personal data.

Users can connect to a VPN server and do business online with a borrowed IP address to evade surveillance. Mozilla VPN also encrypts your data, making it impossible to read until it reaches its destination server.

Mozilla VPN launched in September 2019 as a Firefox browser extension called Firefox Private Network. Firefox users tested the feature for several months. In February 2020, Mozilla retooled the extension and launched it as a standalone VPN.

It was called Firefox Private Network until it was renamed to Mozilla VPN in June 2020. Though the VPN app is now the flagship product, the browser extension is still available for Firefox users. 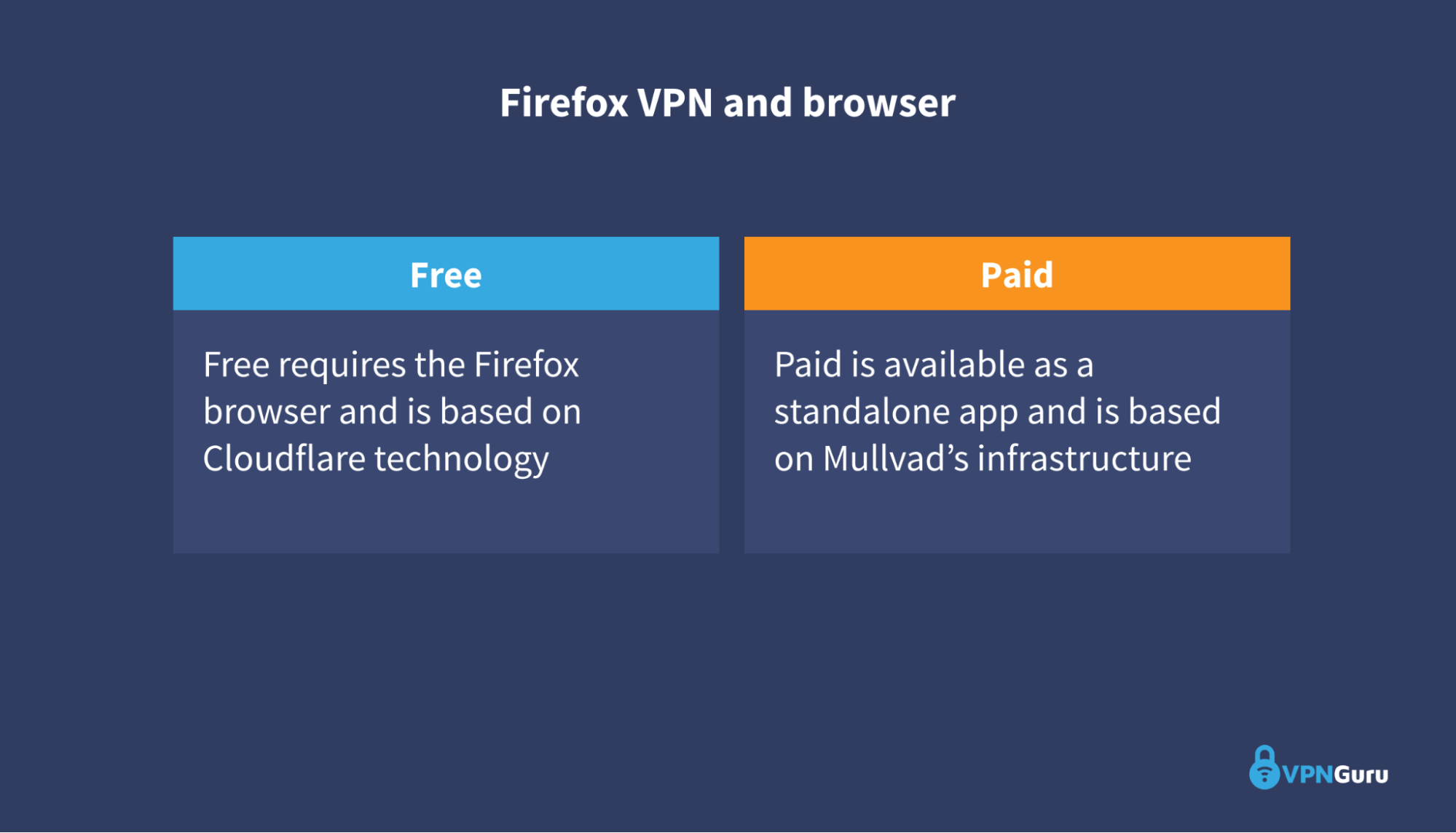 This Firefox VPN is more limited than other VPNs in some ways. It’s currently only available for download in 15 countries, though the team is working on adding more.

Also, both of its versions are borrowing infrastructure from other organizations. The browser extension relies on Cloudflare services, while the independent version borrows servers from another VPN provider, Mullvad VPN.

Cure53 is a respected cybersecurity firm based in Germany with 15 years of experience looking for security holes in apps. Its research famously convinced the government of South Korea to shut down a popular parental control app.

Mozilla VPN has undergone a two-stage audit by Cure53. The first stage, conducted in August 2020, revealed several critical security holes in the Firefox VPN. The Mozilla team diligently fixed them all. By the second stage, in March 2021, Cure53 saw dramatic improvement (though some flaws remained).

It’s important to note that Mozilla didn’t resolve every flaw discovered by Cure53. It only left one vulnerability unaddressed, but as Cure53 reported, it would be very difficult for a hacker to exploit without access to an entire country’s resources.

Mozilla VPN only supports one VPN protocol: WireGuard. Luckily, WireGuard is one of the best protocols currently available. It’s often compared to OpenVPN and provides about the same security. Encryption relies on ChaCha20 instead of AES-256, but both are functionally unhackable.

With a much slimmer codebase (less than 1% the size of OpenVPN), WireGuard is faster and easier to support. It’s also far less vulnerable to attack — fewer lines of code means fewer weaknesses to exploit.

Mozilla made the sound decision to throw Mozilla Firefox browser users a bonus in the form of the Firefox Private Network browser extension.

If you do happen to use Mozilla Firefox as your main web browser, you can get Firefox Private Network for $2.99 per month, which is more affordable than the standalone VPN (see the pricing section below).

Though Firefox Private Network is only available in the US, it’s a good way to save money if you only need VPN protection for browsing the internet. However, other highly affordable VPNs, like Surfshark and Private Internet Access, include VPN extensions as part of their regular subscription packages.

Mozilla VPN is an extremely easy VPN service to use. It has few features, but that’s a positive here, making it easier for new users to grasp. All the Firefox VPN apps are easy to use, even if you’ve never worked with a VPN before.

The website is nice and simple as well, making download and installation a snap. Whether online or in the desktop or mobile app, we never had trouble figuring out how to do basic VPN tasks (like connecting to a server).

Only available in 15 countries

Access to Mozilla VPN is severely limited by your geographic location. As of right now, you can only download the Firefox VPN if you live in Austria, Belgium, Canada, France, Germany, Ireland, Italy, Malaysia, the Netherlands, New Zealand, Singapore, Spain, Switzerland, the UK, or the US. 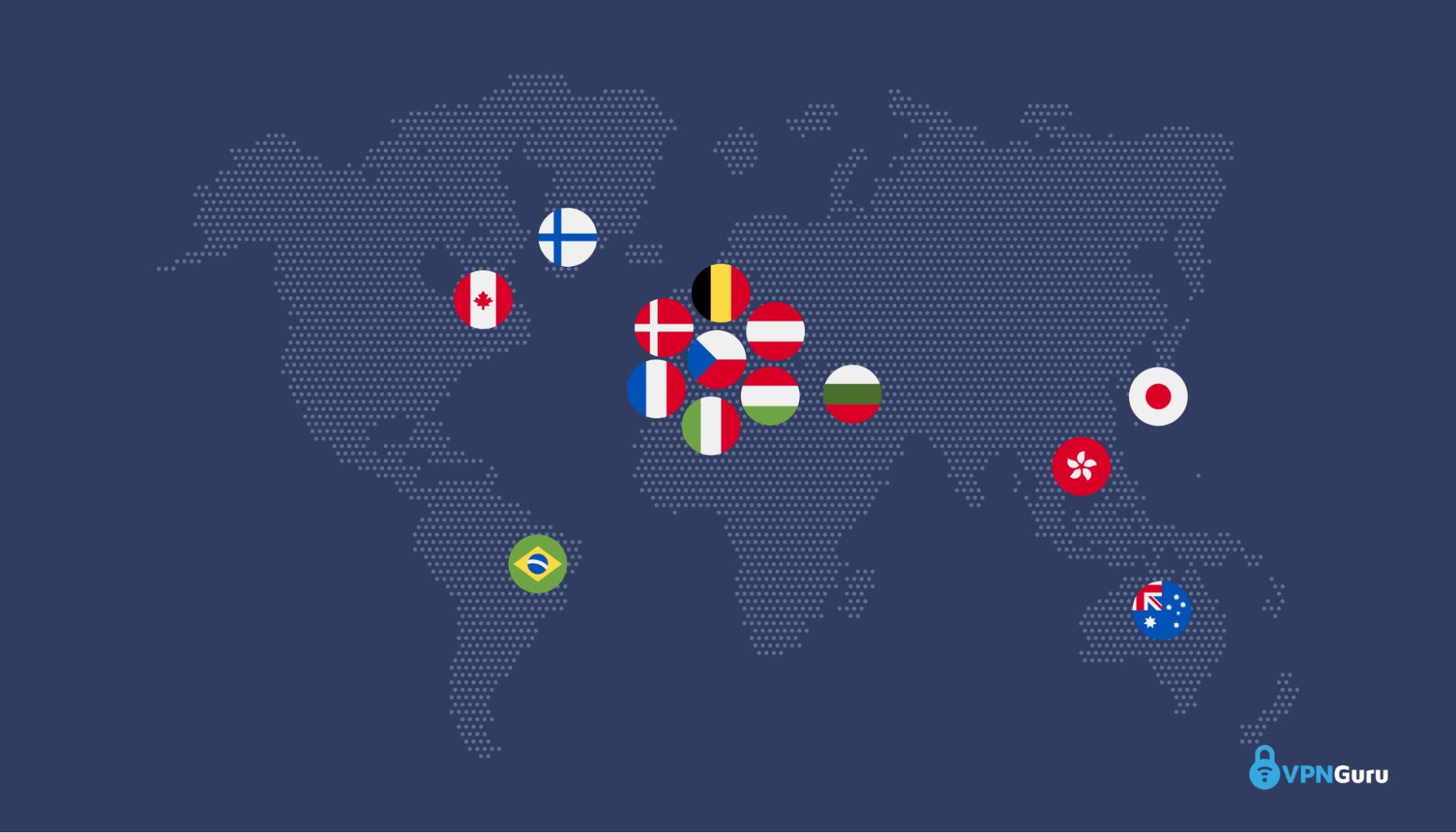 Mozilla VPN only launched to the general public in 2020. As you’d expect, it doesn’t have a lot going on yet.

It’s not like there’s absolutely nothing there besides the server network. There’s a kill switch, for example. A kill switch cuts off your Wi-Fi if you lose your connection to the VPN, ensuring you never leave the safety of the encrypted tunnel. However, you’re not allowed to turn the kill switch off, which will likely frustrate many users.

There’s also split tunneling. That feature lets you protect specific apps with the VPN while others run unprotected for better speeds. This convenient feature is available on Windows, Linux, and Android.

Outside of that, there’s nothing. No dedicated server types like P2P or streaming, no malware blocker, and you can’t even set the VPN app to automatically connect when you open it. Compared to NordVPN or even to Surfshark (which isn’t much older than Mozilla VPN), pickings are extremely slim.

This is normally where we test the speed of a VPN service, measuring it against our initial unconnected performance.

Unfortunately, after downloading Mozilla VPN on multiple devices, we couldn’t log in on any of them. Every time we log in to our test account, the VPN kicks us right back off. We attempted to uninstall and reinstall, and the VPN refused to even let us in the door. 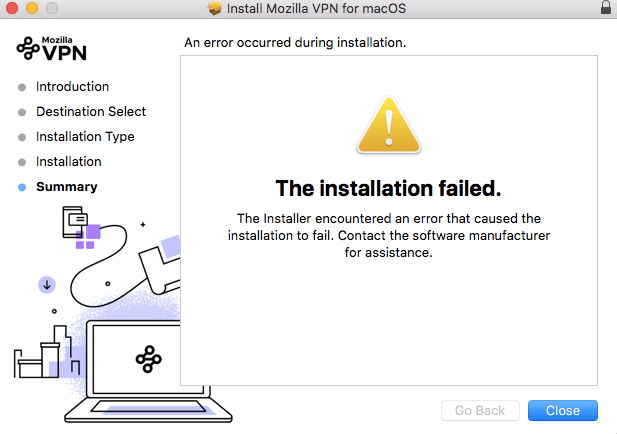 This may be fixed by a future update, but until then, it’s impossible for us to recommend this VPN to anybody.

Even if Mozilla VPN eventually fixes the flaws that make it impossible to log on, many areas of the world would not be covered by its server network. As mentioned above, Mozilla VPN borrows its infrastructure from Mullvad. It has about 400 total servers across 30 locations.

That number is dwarved by Private Internet Access, the largest VPN in the world, which has nearly 20,000 servers.

We’ll get this out of the way right now: Firefox VPN is way too expensive for the service it provides.

Now, the details. Firefox VPN has three pricing options. They all come with the same service, so the only difference is how long you sign up for. A longer subscription costs less per month.

A monthly subscription costs $9.99. Signing up for six months costs $7.99 per month ($47.94 total). Subscribing for 12 months costs $4.99 per month ($59.88 total). Each one includes five simultaneous connections with no bandwidth limits. There’s also a 30-day money-back guarantee.

If you use the Firefox browser, you can get the Firefox Private Network extension for $2.99/month.

Even at the 12-month level, this VPN costs way too much. Firefox VPN doesn’t have enough features, servers, or functionality to charge as much as NordVPN and ExpressVPN. The two cheapest options on our favorites list, Private Internet Access and , both cost less while doing more.

Your only payment options are a credit/debit card or PayPal (no cryptocurrency or other anonymous payment methods).

If you’ve decided Mozilla VPN isn’t right for you, here are a few other options to check out. 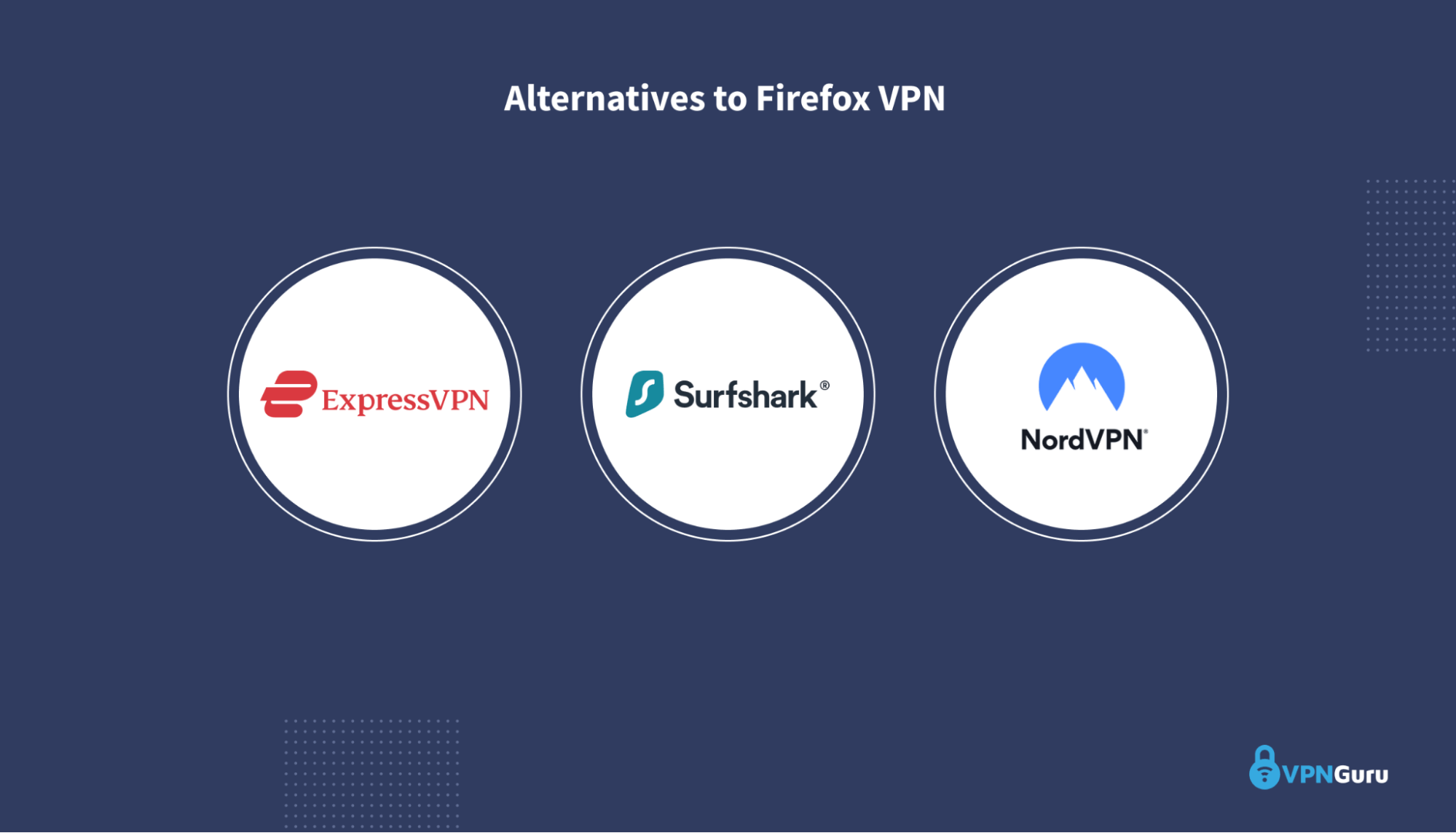 ExpressVPN is fast, based on a robust server network, and widely available. It comes with a user-friendly interface on all platforms, making it the perfect companion for VPN newbies and veterans alike. Read more in our full ExpressVPN review.

Surfshark is only a year or two older than Firefox VPN, but it’s already lightyears ahead. Its server network is larger, its interface is better, its speeds are faster, and its pricing is competitive. To learn more, read our full Surfshark review.

NordVPN is a high-performing VPN that comes with great speeds on almost every server in its network. It has a good record of responding to privacy issues and also comes with NordLynx, its faster implementation of WireGuard. Find out all there is to know in our full NordVPN review.

CyberGhost VPN has an expansive server network, and it’s bursting with features. If you’re looking for a deep level of control over your VPN service, this is the choice for you. Discover why in our full CyberGhost review.

Zenmate is a user-friendly VPN that supports WireGuard. It’s another newcomer to the VPN scene, but it’s making a splash with its ability to unblock streaming services and deliver optimal speeds. Read our full Zenmate review for more information.

Mozilla VPN might be a contender for the top five one day, but it just hasn’t spent a long enough time in the oven. It’s hard to expect greatness from a VPN the year after it launches.

That said, given that Mozilla has been a security leader for 20 years, we expected more from the first Firefox VPN. We’ll watch for this VPN to deliver more in the future, but so far, it’s a disappointment.

Keep an eye on this service, but in the meantime, you can choose a more established VPN. ExpressVPN, NordVPN, and Surfshark are all great choices to get you started.

Firefox VPN review: Is this Mozilla VPN worth using?