A VPN protects your online privacy and keeps prying eyes from accessing your data. It’s become an essential tool for many online users.

But just because you need a VPN doesn’t mean you should select the first one that pops up on Google or the Play Store. You need to pick one that provides fast speeds without compromising on security or privacy.

CyberGhost is one of the most highly-rated VPNs today, thanks to its lengthy feature list and affordable pricing.

It stands alongside renowned providers like ExpressVPN, Surfshark, and Private Internet Access, with blazing speeds, strong security measures, and optimized servers for streaming, gaming, and torrenting.

We delved into the provider’s offerings in this CyberGhost VPN review to see if its features live up to its reputation. 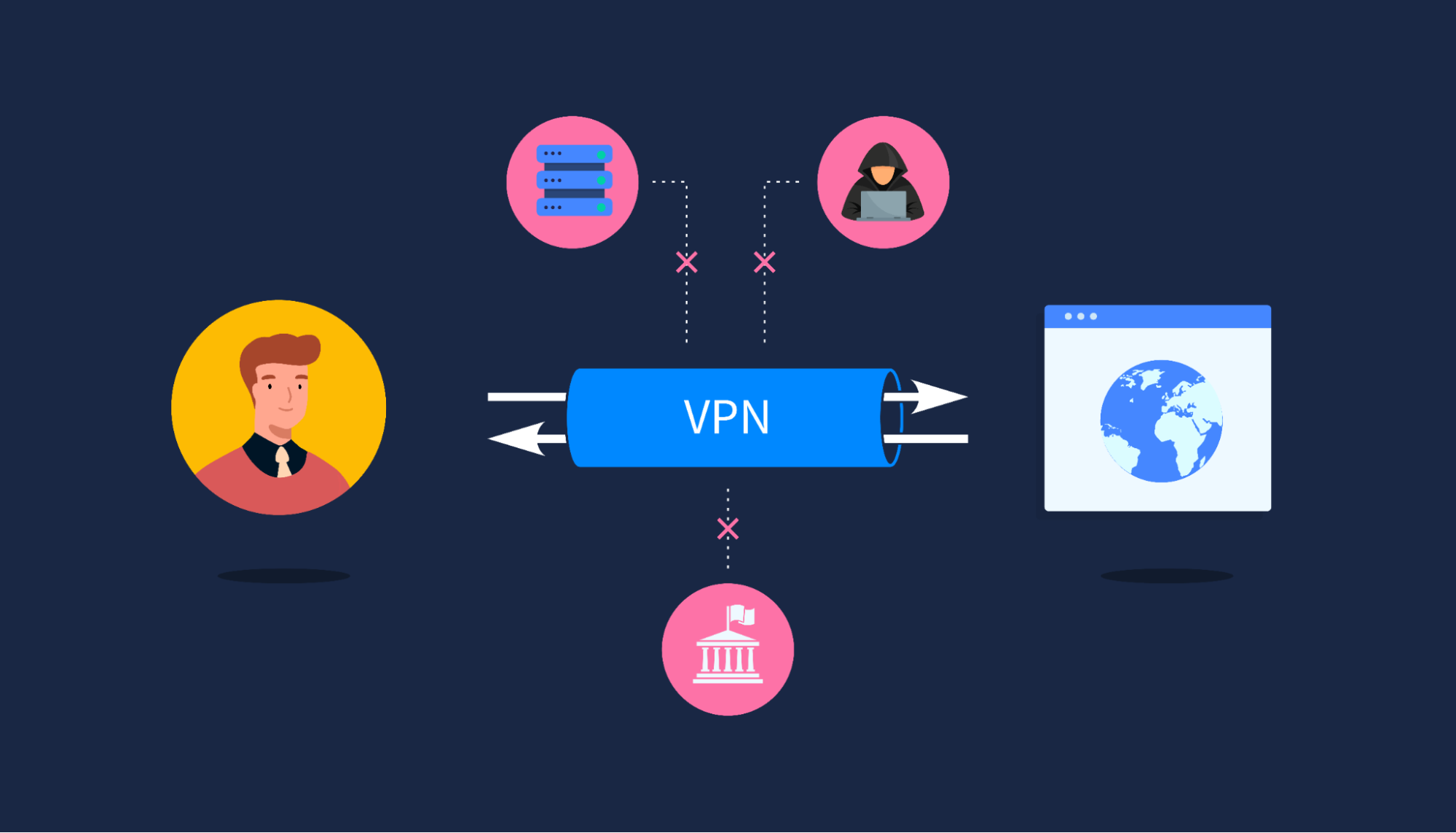 A Virtual Private Network (VPN) lets you access the internet through an encrypted tunnel. This encryption protects your privacy and enhances data security.

You’re likely already paying a lot of money to have a secure internet connection. Despite this, in many countries, internet service providers (ISPs) are still allowed to sell your data.

For example, it’s perfectly legal for ISPs to sell your anonymized data in the U.S. While laws are different for every region, the only true way to protect yourself is to stop ISPs from collecting data in the first place.

This is why you need a VPN service to mask your online movements.

VPNs also have the added benefit of enabling access to geo-blocked content, such as streaming sites, and allow peer-to-peer (P2P) sharing or torrenting.

VPN providers use different protocols to connect to the internet. The six main protocols are:

Each VPN protocol has its own list of pros and cons. Your VPN provider dictates how many protocols you can toggle between.

There are hundreds, if not thousands, of VPN providers, so picking one can be a daunting task.

Here are five features you should pay attention to when choosing a VPN:

CyberGhost is an excellent VPN with lightning-fast speeds and robust security and privacy measures. They offer an extensive list of features, and we’ve explored them in-depth to provide a fair review: 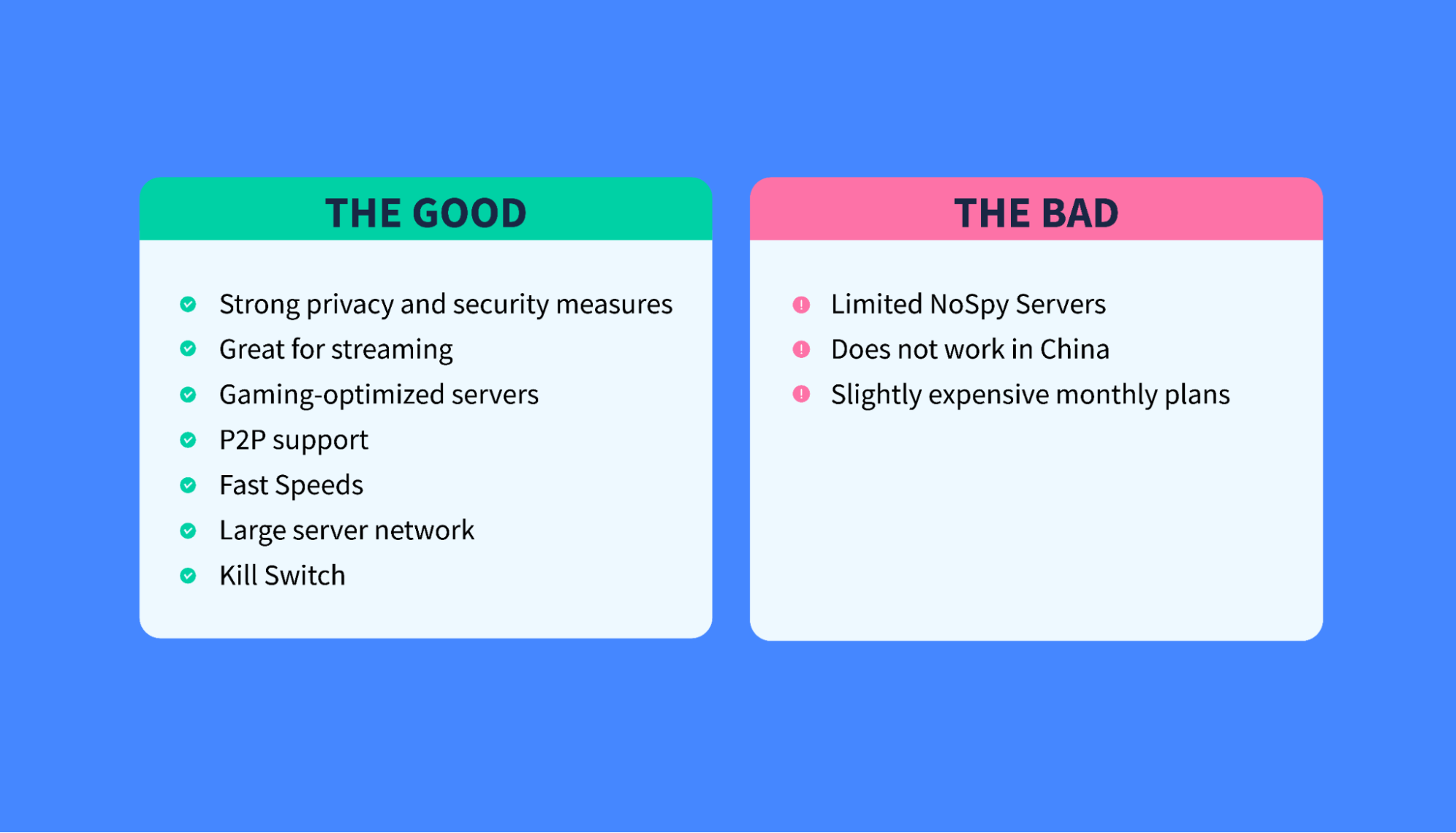 CyberGhost is among the best VPNs when it comes to security and privacy. The provider utilizes the AES-256 encryption protocol, which is the highest level encryption currently available. Strong encryption means even if a hacker can access your information, they won’t be able to read it.

Apart from encryption, CyberGhost’s headquarters are in Romania, which isn’t part of the Five Eyes security alliance — an intelligence-sharing alliance between Australia, Canada, New Zealand, the United Kingdom, and the United States.

Romania is also not part of any intelligence alliance, meaning CyberGhost does not have to collaborate with foreign intelligence agencies in any way.

The company is a self-proclaimed “major supporter and promoter of civil rights, a free society, and an uncensored internet culture.”

They make good on this promise with a strict no-logs policy.

A no-logs policy means the company does not store any of your online data, such as your IP address, location, used bandwidth, etc.

CyberGhost is so confident about its commitment to user anonymity and no-logs policy that it publishes a Transparency Report every quarter.

A rare privacy feature that CyberGhost offers is payment via Bitcoin. You can use the cryptocurrency to pay for your subscription, so you don’t have to divulge your card or bank account details. This is another big step towards online anonymity.

We also didn’t find a single IP or DNS leak when using CyberGhost.

The specialized streaming servers don’t just give you access to these sites. They also provide superb speeds, so your videos don’t keep buffering. There’s minimal lag. 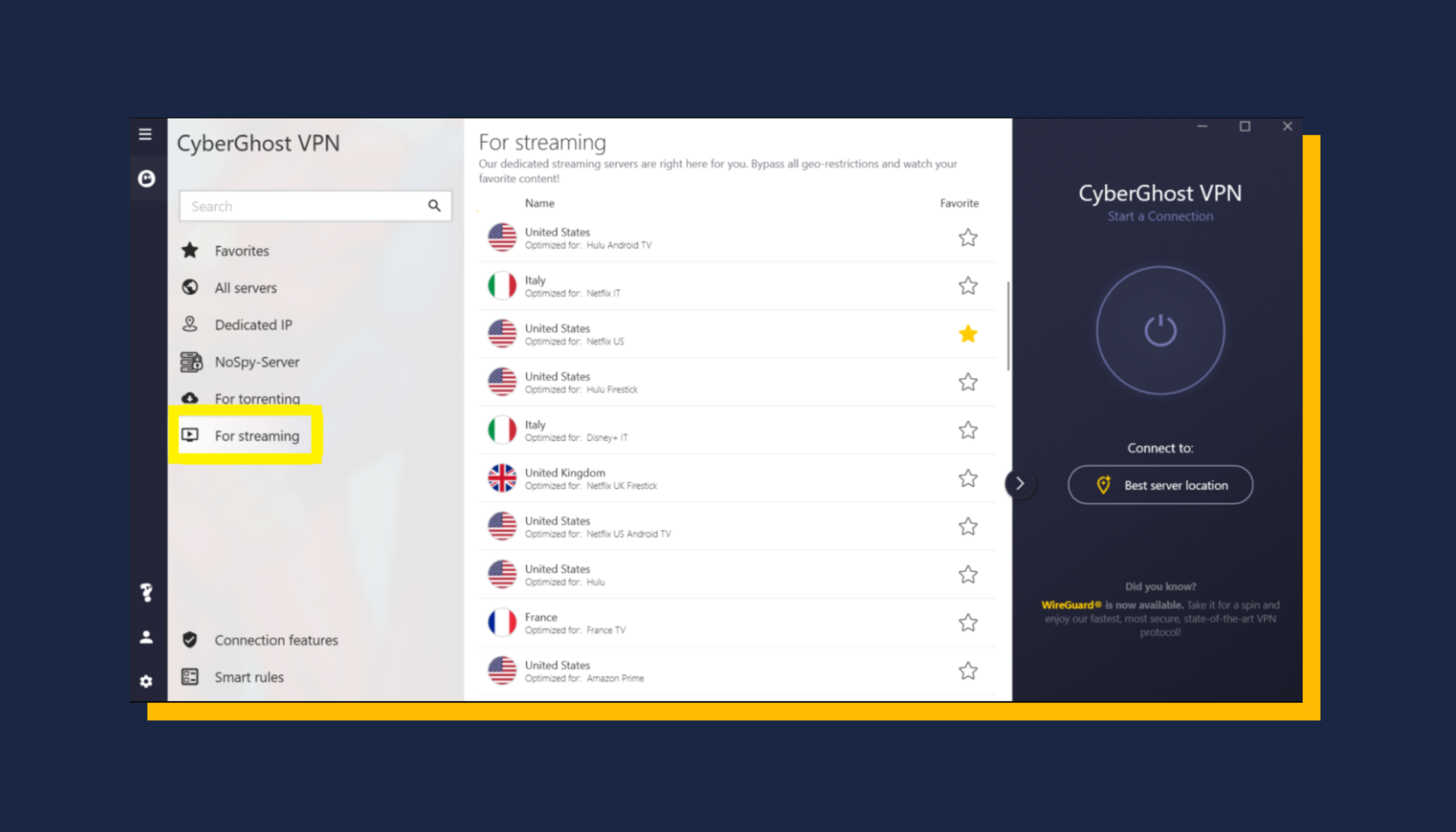 This is especially impressive since every popular streaming platform actively works to block VPNs. Many of CyberGhost’s competitors don’t work with platforms like Prime Video, Netflix, or Disney+.

You can even use it to unlock add-ons on Kodi, a home theater software.

If you’re worried that a VPN client might increase ping rates and cause lag while gaming, fret not. CyberGhost has a range of gaming-optimized servers meant to maintain low ping rates.

It’s generally recommended that users pick a server location that’s close to them for faster speeds. To help with this, CyberGhost shows you the distance between you and the server, along with current ping rates and server load.

All this information enables users to pick the most optimized server when gaming.

The VPN also works on gaming consoles like the PlayStation and Xbox, so you can enjoy your games without worrying about potential data breaches.

Having a VPN on your gaming console gives you the benefit of bypassing geo-restrictions. For example, you can access the PlayStation store for different regions to get early access to games or play games that aren’t available in your location.

P2P sharing or torrenting is illegal in many countries, or at the least, open to copyright claims. Major torrenting sites like Pirate Bay and KickAss are often banned. You can only access them by using a VPN connection.

CyberGhost has specialized servers for torrenting. Using these servers, you can make sure that copyright claim holders don’t get a hold of you and your ISP can’t track your online activity. 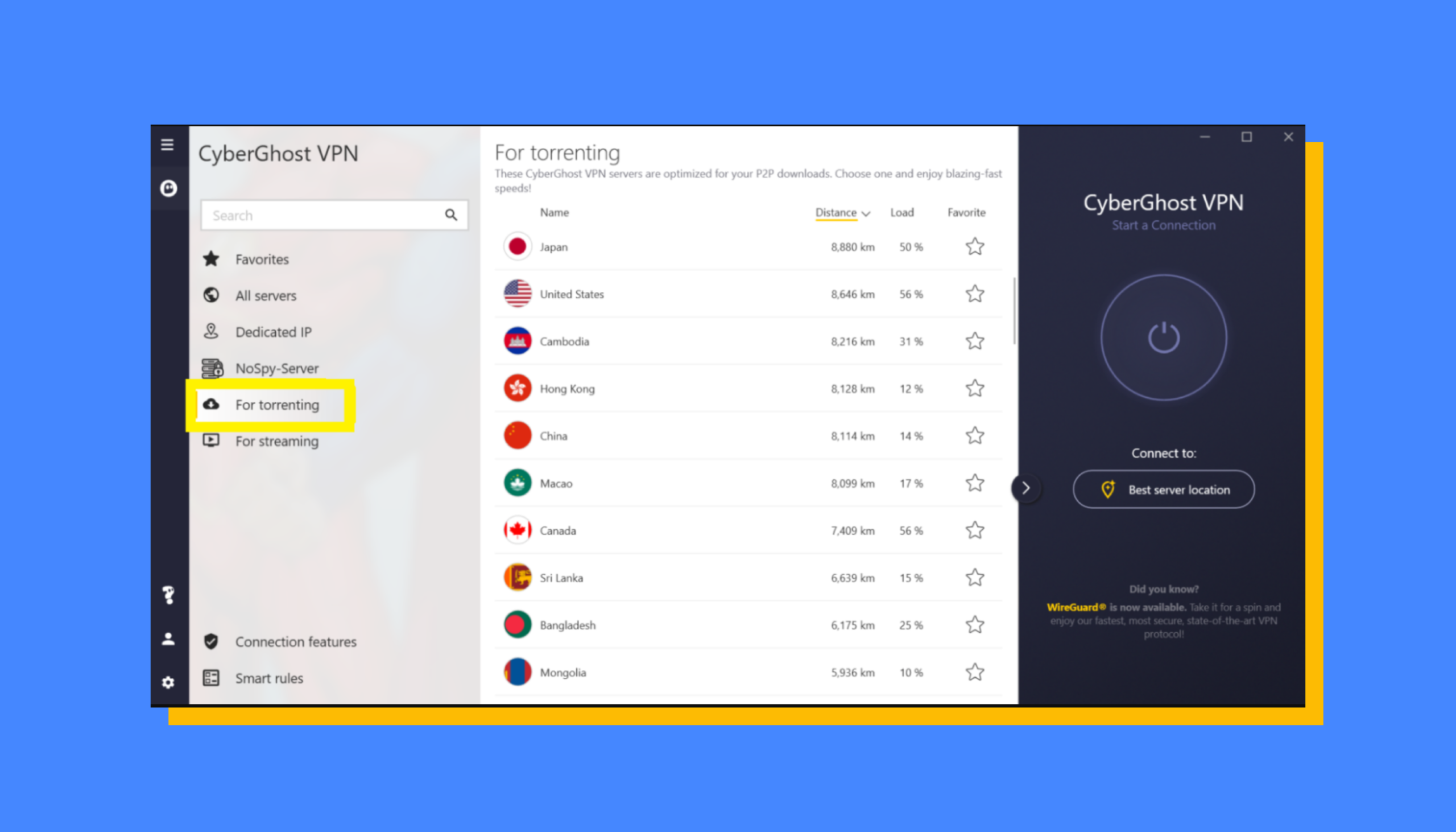 Many users don’t get a VPN because they’re afraid that it will slow down their connection speed and lead to reduced download speed, video buffering, etc. You don’t have to worry about this with CyberGhost.

Whether you’re using CyberGhost for streaming, gaming, or torrenting, you’re bound to get blazing speeds. The VPN service provider excelled in our speed test.

Multiple tests have shown that this VPN can easily provide speeds upwards of 30 Mbps. There might be a slight dip in speed for servers that are very far away, but it’s not noticeable and doesn’t interrupt your online activities. It’s not the fastest VPN out there, but it gets the job done.

However, it is worth noting that your internet speed also largely depends on your physical location, ISP, and other technical factors.

CyberGhost users can choose between 6,876 servers, spread across 112 locations in 90 countries.

All of these servers allow you to connect using different protocols, including IKEv2 and OpenVPN.

CyberGhost’s massive server network makes it easier for users from different countries to find one close to them, change servers in the event of server overload, and unlock content in more regions.

A kill switch automatically shuts off your internet connection when your VPN is not connected. So, when your Wi-Fi resets, or there’s a power outage for a few minutes, your online activity won’t be compromised while the internet is reconnecting.

Most top VPNs offer this feature, and CyberGhost is among them.

While CyberGhost is an excellent VPN overall, we do have a few gripes:

CyberGhost offers ultra-secure NoSpy servers for an extra cost of around $5 per month. These servers provide a bigger bandwidth, faster speeds, and a dedicated IP address.

Every NoSpy server is located in Romania, so they’re out of reach of intelligence alliances. They are constantly monitored to maintain the highest security levels.

The problem is that there’s no clarification on how many of these servers are available for users. At the time of this writing, there were 10+ such servers, which isn’t a lot.

Even if a fraction of CyberGhost’s millions of users opt for NoSpy servers, there’s a higher chance that server overload, low speed, and high ping rates could become a problem.

The extra $5 per month might also be a deal-breaker for some. However, it is also possible that CyberGhost will be adding more NoSpy servers in the future to combat this potential issue, so it’s something we’re going to be monitoring closely.

Does not work in China 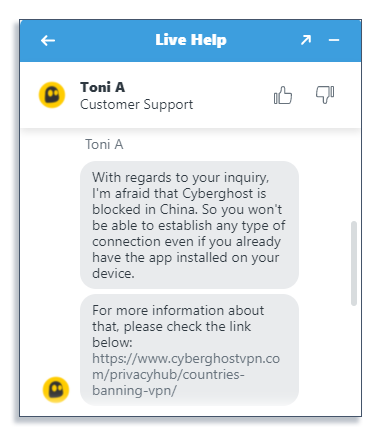 China is known for its Great Firewall and banning VPNs that aren’t approved by the government.

Unfortunately, CyberGhost is among those banned providers.

While you can connect to some servers to access a few Chinese sites, the VPN will not connect if you’re physically in China.

CyberGhost’s website is blocked, and Chinese app stores removed its app. Users can’t download the CyberGhost VPN app on their desktops or install the Android or iOS app.

CyberGhost offers four payment plans, only one of which is monthly. The monthly plan costs $12.99, which is slightly more expensive than its competitor’s rates.

Private Internet Access, for example, offers a monthly plan for $9.95.

While we admit $12.99 is a tad bit on the higher end, it’s still well within industry standards and costs only a few cents more than ExpressVPN or Surfshark’s monthly plans. 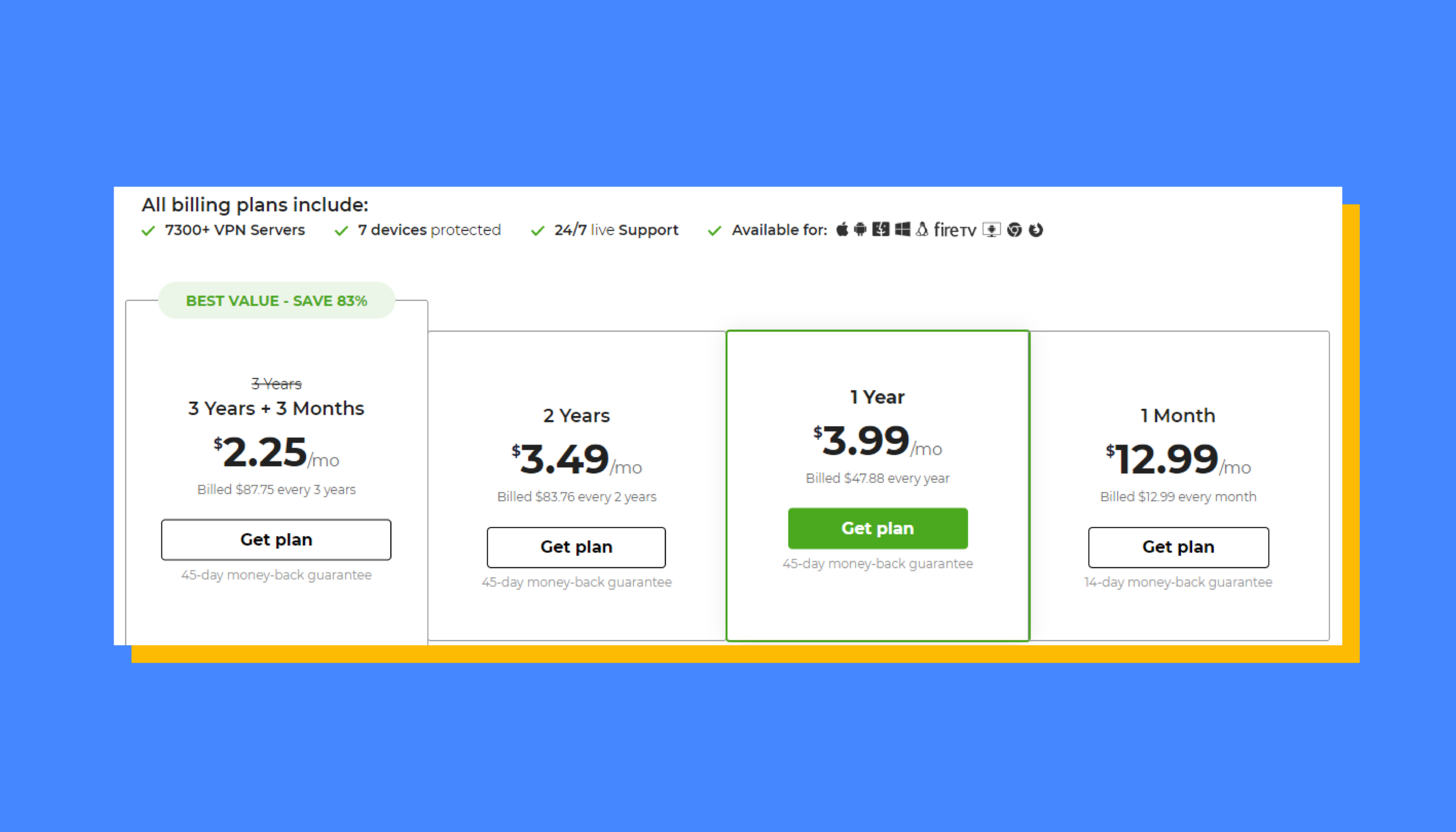 CyberGhost’s annual plans are cheap, which is incredible considering the features it provides.

If you’re looking for an alternative VPN service to CyberGhost, here are the five best options.

ExpressVPN is a leading VPN provider worldwide. It is known for its lengthy list of features, including 3,000+ servers in 160 locations across 94 countries.

The TrustedServer technology ensures all ExpressVPN servers are RAM only, meaning nothing is ever written to the hard drive. Even in the worst-case scenario, in the unlikely event that its servers are hacked, the data risk is minimal.

Find out why this provider is so popular by reading our detailed ExpressVPN review.

NordVPN is another famous provider that offers over 5,400 servers in 59 countries. They’re known to provide great speeds, a dedicated IP, split tunneling, and the best security features.

You can learn more in our NordVPN review.

ZenMate is a lesser-known VPN provider that has servers in 79+ countries. You can use it to unblock geo-restricted content on Netflix in multiple countries via streaming-optimized servers. It allows five different devices to connect with just one subscription.

Find out if it’s worth trying in our ZenMate review.

Surfshark offers one of the cheapest payment plans for a top-notch VPN provider with 3,200+ servers in 65 countries. It comes with all the necessary security and privacy measures. This VPN solution stands out by offering unlimited devices on one subscription and has two-factor authentication for added security.

Check out our Surfshark review to find out more.

Private Internet Access (PIA) is a veteran in the VPN game. It’s been around for more than a decade and is loved by millions of users for its functionality, incredible speeds, and access to 32,649+ servers in 78 Countries.

Our Private Internet Access review helps explain why the provider is so renowned.

CyberGhost is an excellent VPN provider with thousands of servers that unblock content and support torrenting while utilizing the highest level of security and privacy measures.

If you’re looking for a VPN in 2021, CyberGhost is one of the best and definitely worth trying out.

We’re VPN experts that know what we’re talking about. You can read our reviews to help you make the right choice.