Both allow you to access a computer network apart from the network where you’re physically located. However, there are many important differences between the two that you must keep in mind before making a purchase decision.

People can connect to that server to access a virtual machine that hosts data or software that may not exist on their personal devices. From there, it works much like using a remote desktop.

How does VDI work?

The virtual machines on the server can come pre-installed with software that users may need access to but may not wish to install or run on their personal devices. For example, if someone needs to run a program that requires heavy computations, running it on a VM may provide better performance, as it has access to more resources than a laptop.

The server hosting the VMs will likely be connected to the hosting organization’s network. That means people who connect to the VDI can access network resources such as printers or network storage. Ordinarily, they would not be able to access these from personal devices if they are not located somewhere on the network.

Once someone connects to a VM located on the central server, they can use the VM as a normal computer. It can open and use programs, save documents, and browse the internet.

To connect to the VDI, each user will need a device that can communicate with the server. Most VDI systems offer software that lets people connect to a VM using laptops or desktops. One example of this is the VMWare Horizon Client, designed to work with VMWare’s VDI systems. There is also equipment specifically designed to connect directly to a VDI server.

In order to connect to a VDI system, users will need a device that can handle the connection and access the internet.

There are two main types of VDI: persistent and non-persistent.

Persistent VDI functions very much like a normal computer. Each user of the system is assigned a specific virtual machine on the VDI server. When they connect to the server, it automatically connects them to their assigned virtual machine.

People who use persistent VDI can save data to their VM, install software, and adjust settings. The changes that they make will persist from session to session.

With non-persistent VDI, the server hosts a number of generic virtual machines. When someone connects to the server, they are assigned to a VM at random. The VM comes with a setlist of programs and settings preinstalled.

When a user disconnects from the VM, the server wipes the virtual machine and sets it back to default settings. Any settings changes or data saved directly to the VM are lost. When the user reconnects to the server, they’ll be assigned to a new VM with default settings once again.

Persistent VDI is most useful for people who are using it as a replacement for a typical device like a laptop or desktop. Non-persistent VDI is useful for organizations that have users who complete simple, repetitive tasks and don’t need a customized desktop.

When would you want to use VDI?

There are many situations where you would want to use VDI, but it isn’t perfect for all of them.

The greatest advantage of VDI is that it offers a lot of flexibility and user mobility. With a VDI system, every user’s computer is a virtual machine hosted on a central server.

Users are free to connect to their virtual machines from anywhere, whether they’re sitting at home, in the office, or anywhere else. So long as they have an internet connection, they can access the VDI system, along with the software and data they need.

Additionally, using VDI for desktop virtualization can often be cheaper than providing a computer for each person in an organization. Because one server can host dozens of virtual machines, VDI can scale as a business grows and eventually produce a lower per-user cost than buying each individual a laptop or desktop. A growing business may like the flexibility and scaling VDI provides.

Security is another perk of VDI. No company data or software is stored directly on users’ devices. This means that a stolen laptop won’t lead to a major security breach. Instead, all of the company’s data can remain on the company network, where it is exposed to less risk.

While the fact that you can access it from anywhere is a perk of VDI, one drawback is that it is not as convenient as a laptop in some situations.

Connecting to a VM requires an internet connection. You can use a laptop anywhere, even if you don’t have internet access, so people who frequently travel to places with poor internet infrastructure may not want to rely on VDI. 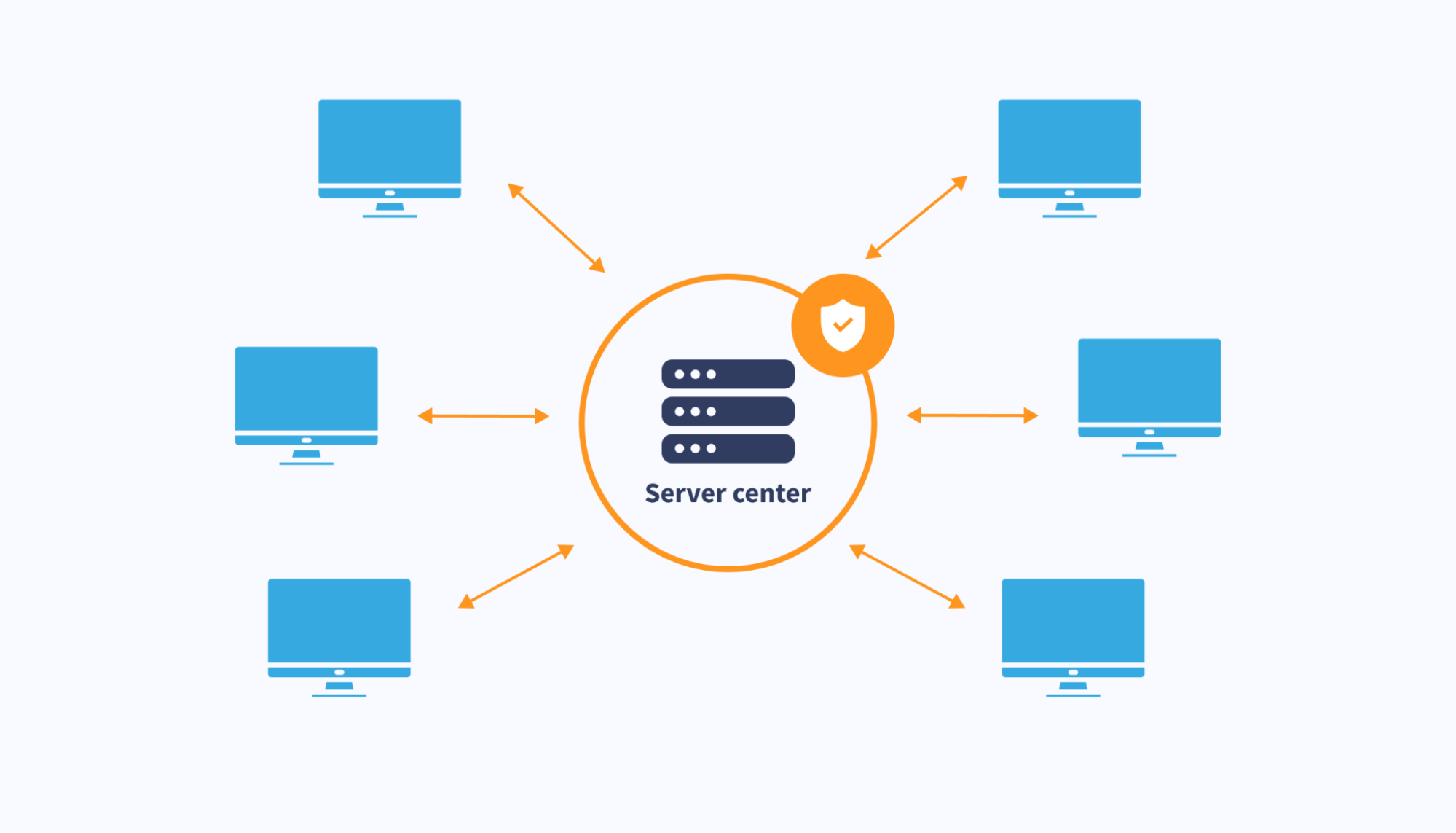 Pros and cons of VDI

Here are some of the basic pros and cons of using Virtual Desktop Infrastructure.

Virtual Private Networks (VPNs), like VDI, are a way that organizations can increase online security and provide access to resources on the company network for people located offsite.

They are highly popular, with about 68% of Americans stating that they use VPNs like ExpressVPN personally or for work. 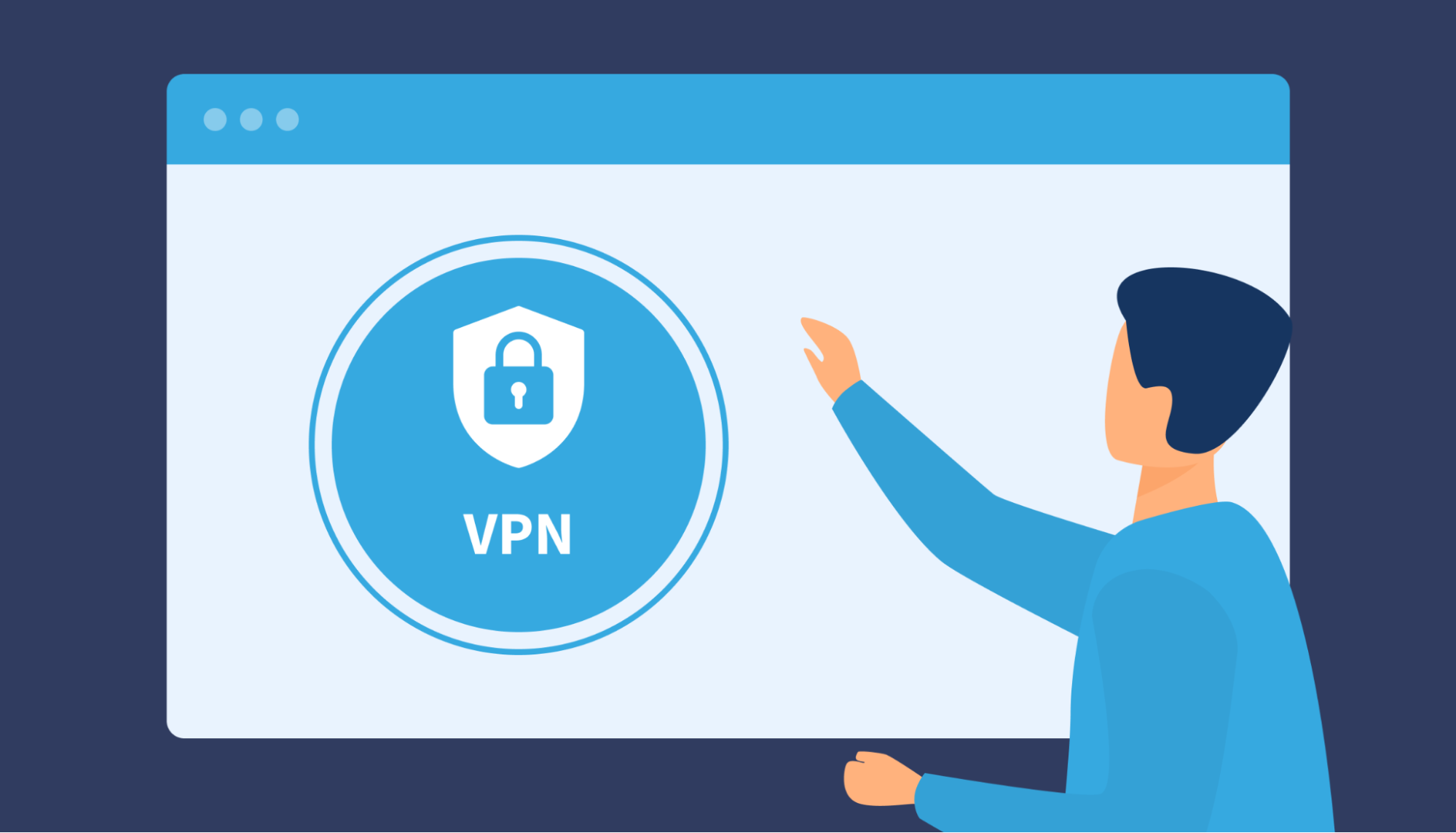 How does a VPN work?

A virtual private network functions by creating an encrypted connection from the client device to one or more secure servers.

With an organizational VPN, this typically means a VPN connection between the client device and a server hosted on the organization’s network.

It also means that client devices not located on the corporate network can be treated as though they are.

Network communications are routed through a server on the network. This gives client devices access to resources like network storage and printers, even if they are physically somewhere else.

Typically, users install a VPN client on their device and connect to it using credentials provided by their organization.

There are also site-to-site VPNs. These create a virtual network that multiple office locations across the world can share. Each office network can have multiple users, and the site-to-site VPN connects each office’s network to a single, larger network.

In these cases, VPN software is installed on the network rather than on each individual’s computer.

This lets users on an office network access other office’s networks without a VPN client installed.

Individuals can use a VPN service like ExpressVPN to connect to a server located in whatever region of the world they’d like. This can add security, make their traffic harder to track, or give them access to content locked by geographic location.

When would you want to use a VPN?

Using a VPN, in effect, lets you use your computer as though it were physically located somewhere else.

Using a VPN can be useful for organizations if you have remote workers that need to access resources located on the organizational network. For example, suppose your organization regularly uses shared network drives for data storage. In that case, a VPN gives people who are working from home or otherwise offsite a way to access that data without coming to the office.

VPNs can also increase security by encrypting network traffic. Organizations that work with confidential information may want to use a VPN to increase security and to reduce the chances of a data breach due to compromised internet hotspots or other network problems.

Because using a VPN simply requires installing a program on client devices and setting up some network infrastructure, it can be more convenient for an organization than building the infrastructure required for VDI.

VPNs are also popular for personal use. One common reason for individuals to use a VPN personally is to gain access to content that is restricted based on location.

For example, someone in the United States could use a VPN to connect to a server located in the United Kingdom. This would give them access to online content restricted to the UK.

Of course, many streaming services actively block access to users connecting with a VPN. However, some quality VPN platforms like ExpressVPN and NordVPN have proven effective at getting around these blocks.

Pros and cons of VPN

Here are some of the basic pros and cons of using Virtual Private Networks.

VDI and VPN are similar in many ways, but there are important differences to keep in mind

VDI and VPN are similar technologies that can help with similar problems, so people frequently have questions about how they work.

Typically, connecting to a VDI requires more bandwidth than using a VPN. With VDI, the network has to transmit the entire computer experience, including your keyboard and mouse actions, along with the video displayed on your monitors.

A high quality VPN solution like ExpressVPN simply routes your network traffic differently than normal, meaning it requires very little bandwidth to use, making it a better solution in many situations.

Can you be tracked if you use VPN or VDI?

Even the most secure VPN or VDI solution will not entirely eliminate the ability of other actors to track you or your network traffic. People who view your network traffic will likely be able to identify that you’re using a VPN or VDI, even if they can’t decrypt the data you’re transmitting.

It’s possible for the organization hosting the VPN or VDI to track your traffic. For example, if you’re using a corporate VPN, the company will be able to monitor your traffic.

When shouldn’t you use VPN or VDI?

VPNs and VDI can be useful, but they aren’t necessary for every situation.

Let’s say that you’re simply browsing the web and don’t need access to a specific organization’s network. In this case, you probably don’t need a VPN unless you want to use one personally for security reasons.

Similarly, unless the VDI you use has access to specific software that isn’t installed on your local machine, you needn’t connect to the VDI unless you need access to its specific resources.

While VDI and VPN may sound similar and share some characteristics, they are two different technologies with very different use cases.

Understanding the differences between VPN and VDI and knowing what each can help you accomplish will help you decide which is the best fit for your needs.

If you decide that a VPN is the right choice, be sure to do your homework before making a purchase. Check out our VPN Reviews page for deep insight into the workings, features, and pricing of some of the best VPNs on the planet.