Home > Blog > Private Internet Access vs NordVPN in 2023: Which should you choose?

Private Internet Access vs NordVPN in 2023: Which should you choose?

Private Internet Access (PIA) and NordVPN are two of the world’s most renowned VPN providers.

They have top-notch features, outperform many of their peers, and consistently rank among the top 10 VPNs worldwide.

So what happens when two industry giants face off against each other? Which one comes out on top?

In this article, we explored both VPN providers’ features, performance, and pricing so that you can choose the best for you. You can also check out our Private Internet Access review and NordVPN review for an in-depth analysis of both providers.

Privacy: Do PIA or NordVPN keep logs of your activity?

Privacy is the primary reason most people use a VPN. When you connect to the internet without a VPN, your internet service provider (ISP) can monitor your browsing activity and collect personal information.

For example, in some countries, like the US, it’s legal for ISPs to sell anonymized versions of your information for profit.

Ideally, your VPN should have a strict no-logging policy, which states that the provider does not collect any information about what you do online. This way, even if your ISP or government authorities ask for your data, there’s nothing to give. 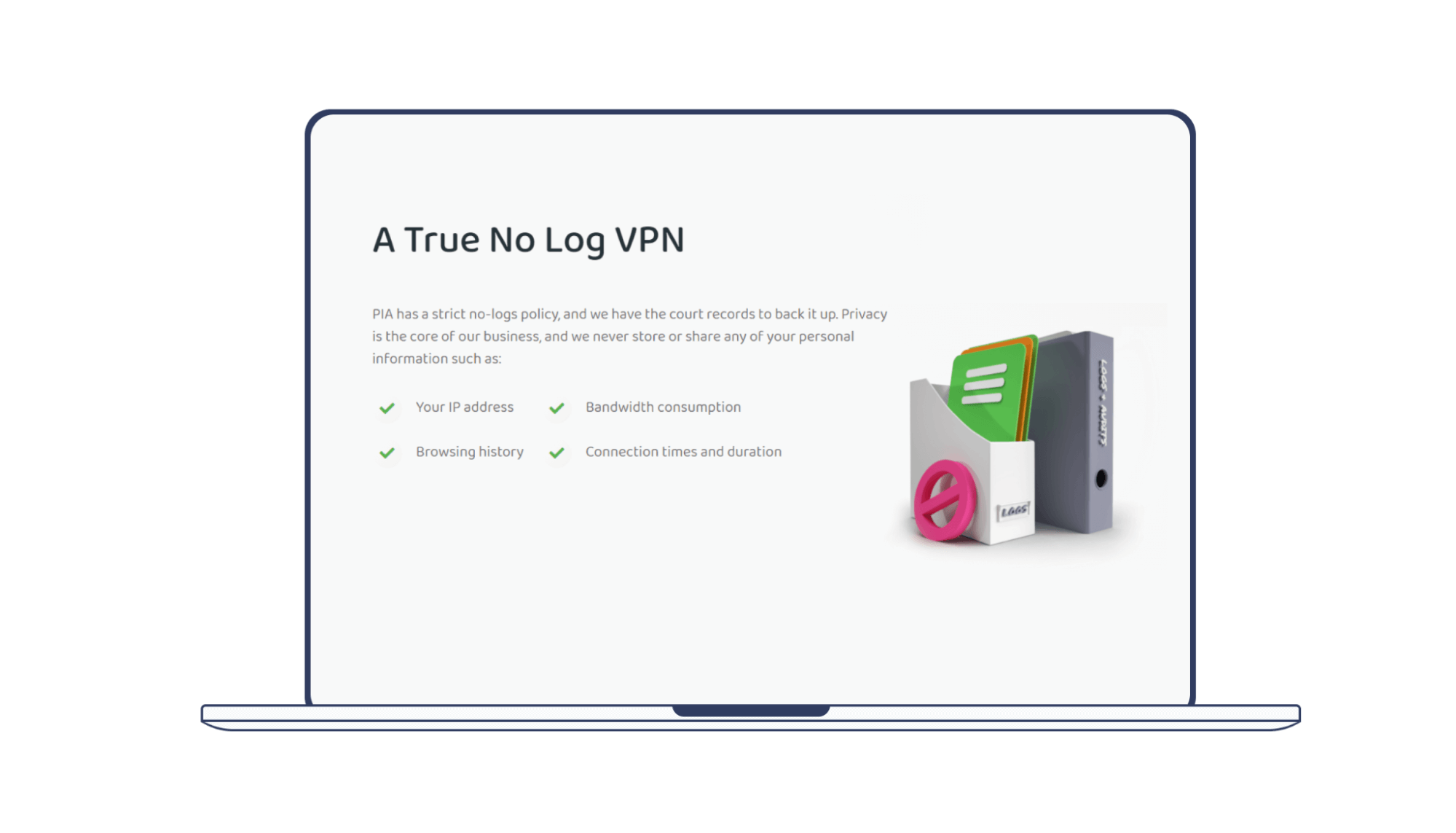 Private Internet Access has been an industry leader for more than ten years. It does not store any user logs. The VPN client only stores the name, email address, payment information, state of origin, and zip code of its users. This is pretty standard for most VPNs.

PIA also publishes a transparency report every year to show recent requests made to its legal department. However, none of these requests were successful since PIA keeps to its strict no-logs policy. 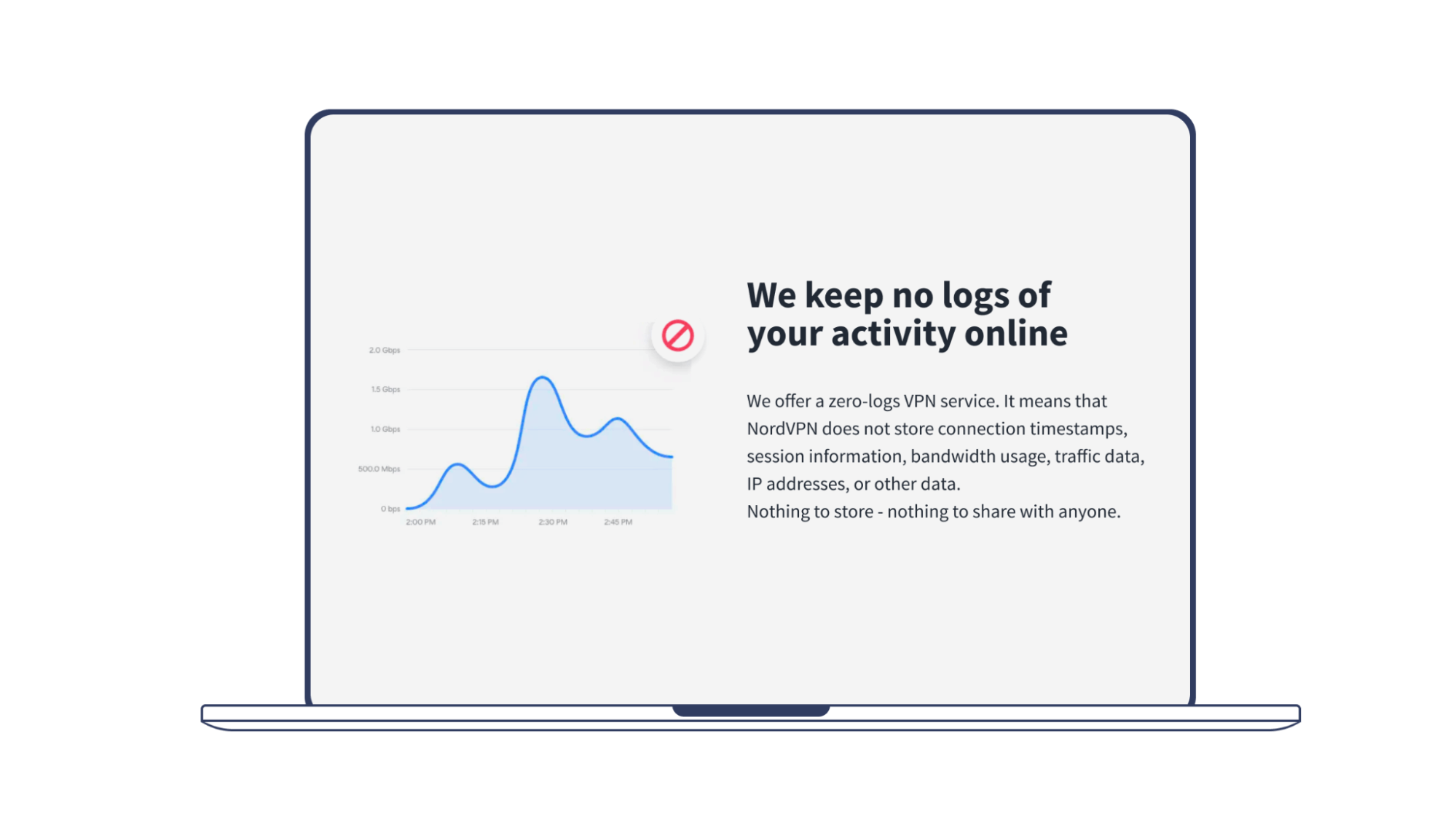 NordVPN has an equally ironclad no-logs policy, and it’s willing to prove it.

PricewaterhouseCoopers AG independently audited the company in Zurich, Switzerland (a Big four auditing firm) and concluded that NordVPN’s policy “is fair and accurate.”

The Panama-based VPN has a slight upper hand over PIA, which is headquartered in the US. That’s because the US is part of the Five Eyes and Fourteen Eyes intelligence alliances.

NordVPN does collect more user information than PIA. It tracks your device model, browser type, the number of days you’ve connected to the VPN, and the country you’re in.

Security: Can PIA and NordVPN secure your connection?

A secure connection keeps your information safe, including sensitive data. VPNs ensure security by encrypting all activity that passes through their servers.

Ideally, you want a VPN that implements the AES-256 encryption protocol. This is a military-grade protocol that offers the best protection.

PIA and NordVPN use AES-256 encryption to secure your connection. In addition, both providers offer a kill switch (which terminates your internet connection when you disconnect from the VPN) and multiple connection protocols, including OpenVPN and WireGuard.

For added security, PIA lets users connect via a SOCKS5 proxy. Both providers also support split tunneling, where you can dictate which apps can directly access the internet while others go through the VPN server. 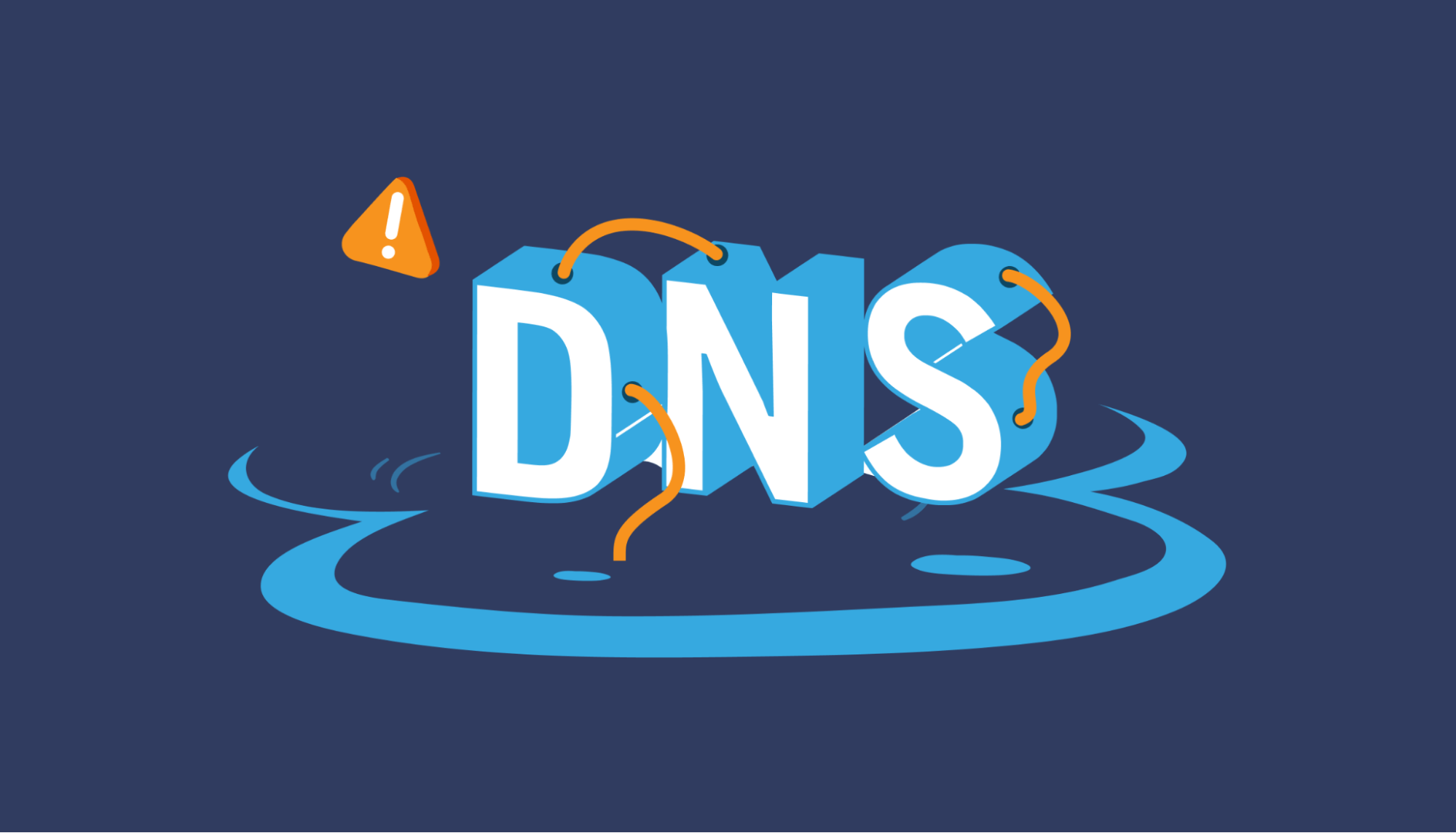 Without a VPN, your DNS requests are handled by your ISP’s DNS server. This allows them to track your activity.

With a VPN service, everything sent to your ISP is encrypted so that you can stay anonymous. When there’s a DNS leak, your original IP address is visible and accessible to your ISP and third parties.

Our tests showed that both NordVPN and Private Internet Access are secure, without any signs of DNS leaks. 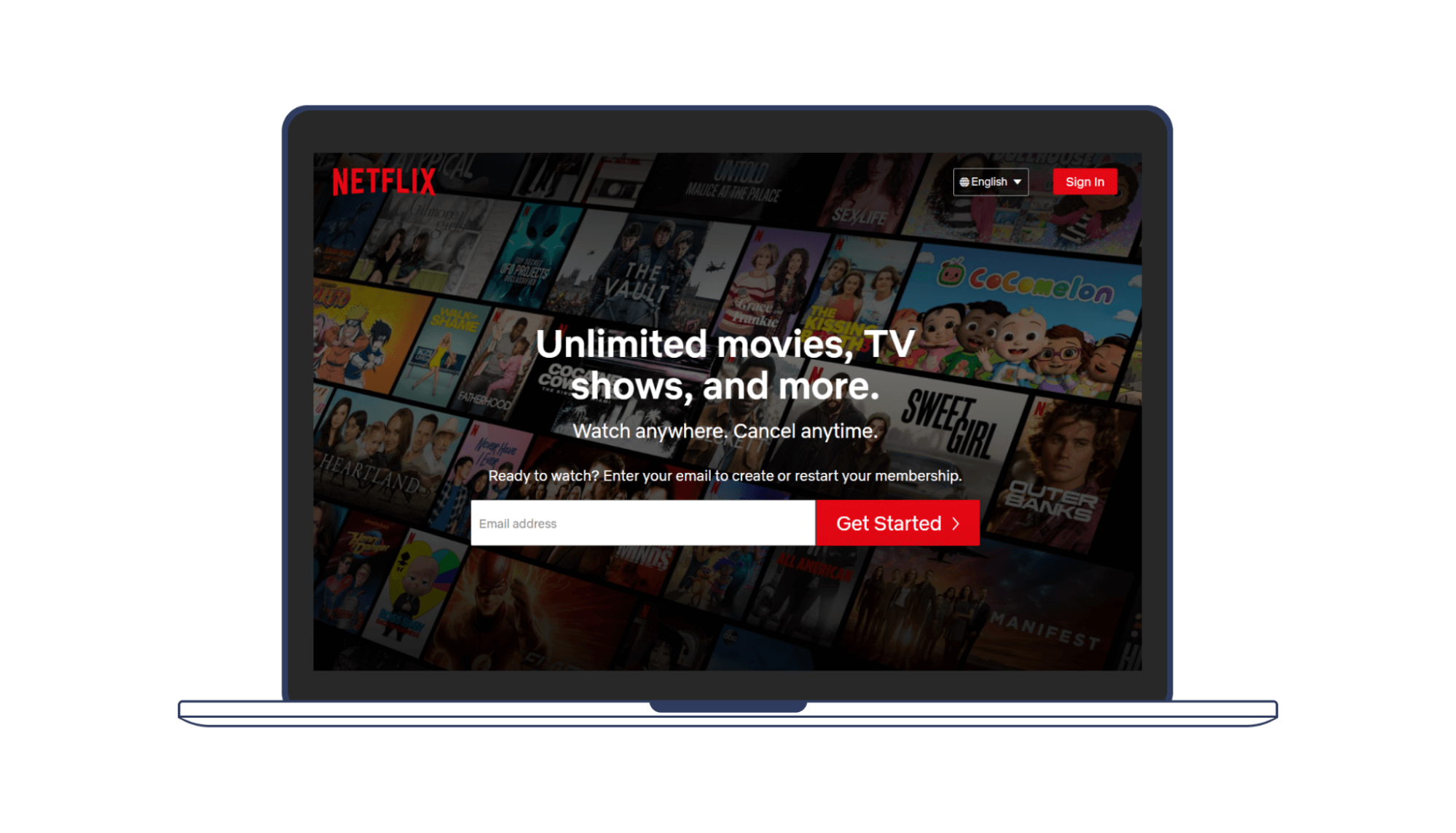 Streaming platforms like Netflix and Amazon Prime Video have location-specific content that can only be viewed by people in that country. This is primarily due to licensing and distribution agreements.

As a result, many countries have shows that cannot be accessed globally. The Blair Witch Project and David Lynch’s Twin Peaks are examples of shows only available in the US.

With a VPN, you can bypass these geo-blocks. But not all VPNs are great for streaming.

NordVPN lets you access different Netflix regions and also works with Disney+, Hulu, Amazon Prime, DAZN, and more. It even works with BBC iPlayer if you’re connected to a UK server.

This is because of NordVPN’s SmartPlay technology, which uses DNS rerouting and pools of IP addresses to bypass restrictions.

PIA worked with US Netflix but failed to unblock geo-restricted content on BBC iPlayer and most other platforms. So, this VPN provider might work with some Netflix regions.

It’s clear that NordVPN is a better option for streaming.

When you’re connected to a VPN, your internet speed is dependent on the following factors:

Both PIA and NordVPN claim to be the “Fastest VPN” on their respective websites, but our tests showed a conclusive winner.

The VPN provider does not have a major impact on your connection speeds. Our speed tests showed only a slight decrease in upload and download speeds when the VPN was on. 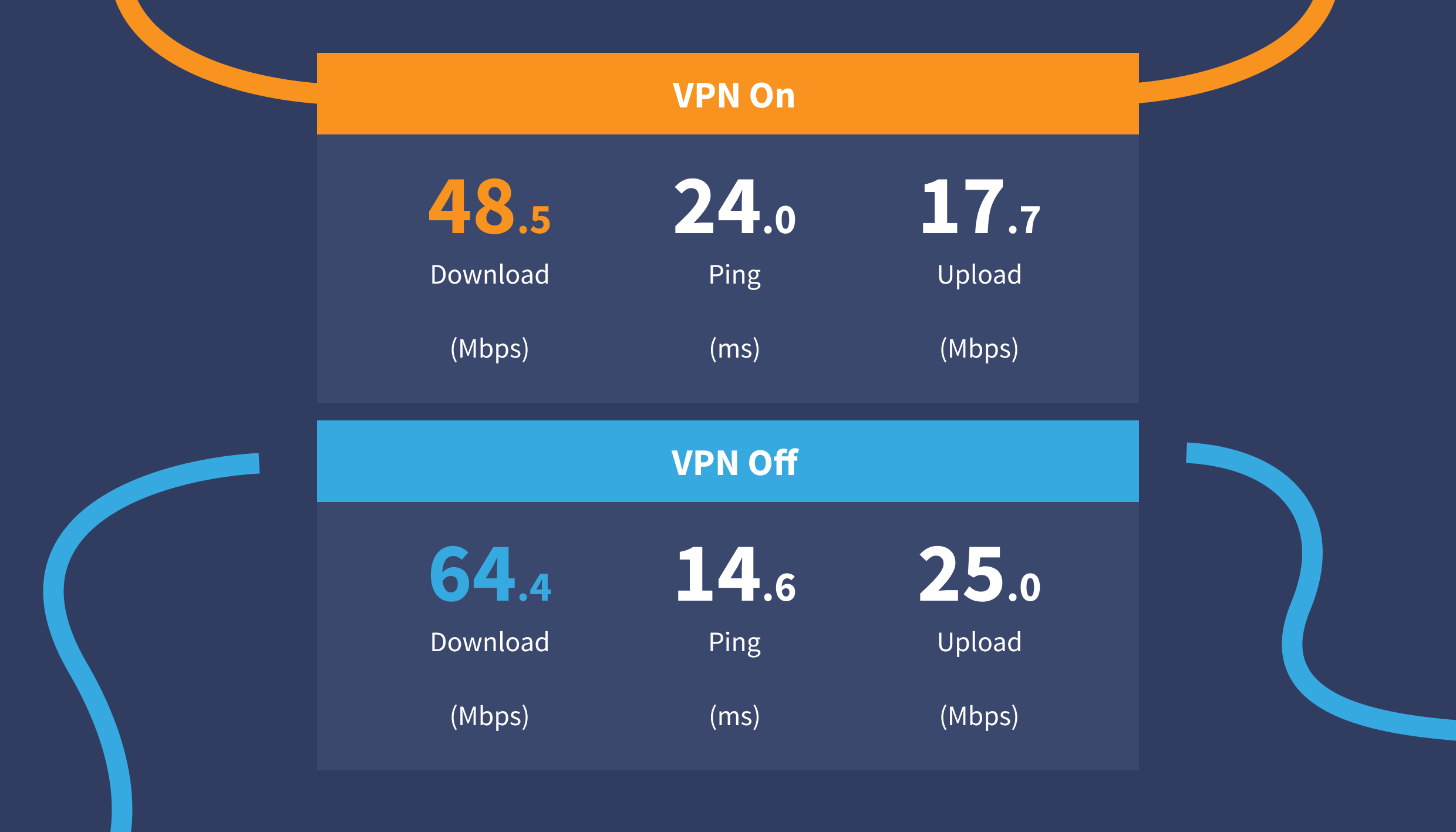 NordVPN’s excellent speeds are due to its recent extensive server upgrades. The provider changed all servers to RAM-disk mode, rolled out self-owned servers and high-bandwidth 10 Gbps servers, and provides WireGuard support across all apps.

NordVPN uses a modified WireGuard protocol called NordLynx, which is why it’s so much faster than its competitors.

PIA does not mention its exact number of servers, but they are spread across 78 countries.

The provider offers decent speeds, but speeds took a significant hit when connected. Without the VPN connected, our tests showed download speed was 229.10 Mbps and the upload speed was 7.03 Mbps. 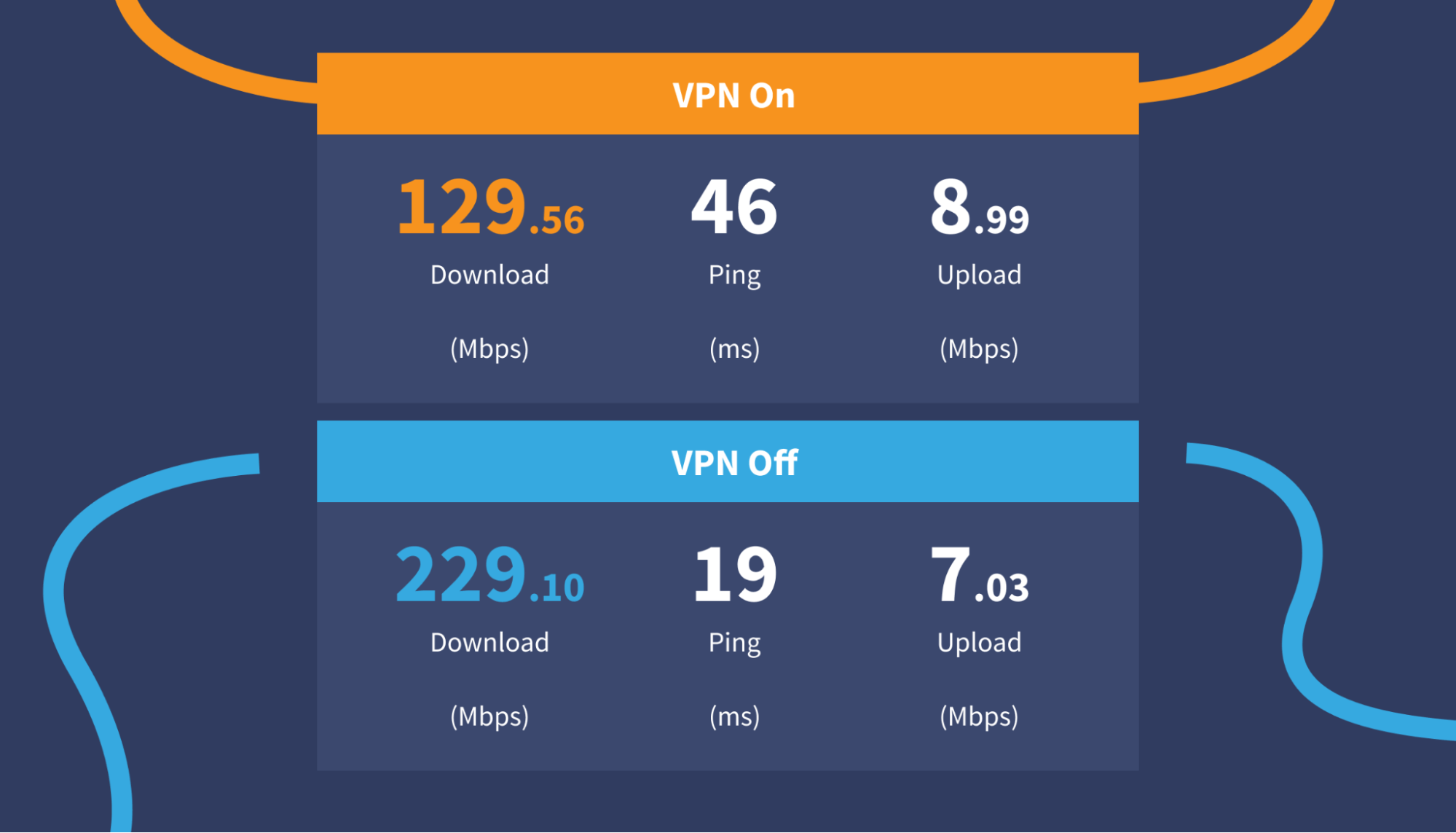 After connecting to a PIA server, download speeds dropped to 129.56 Mbps, marking a 100 Mbps reduction. This was especially true when connected to servers further away from our original location.

Upload speeds, however, were great for PIA. They increased to 8.99 Mbps with the VPN on.

Connections: How many devices can I connect to PIA and NordVPN?

A VPN that lets you simultaneously connect multiple devices via a single subscription is the right choice because:

Some VPNs can be installed directly on your router, so all your connected devices are secured.

Private Internet Access is an excellent choice for families since it allows ten devices to connect using one account. All your family’s banking details, login credentials, and sensitive data are safe.

NordVPN allows six devices per account. This is more suited for individuals or small groups. 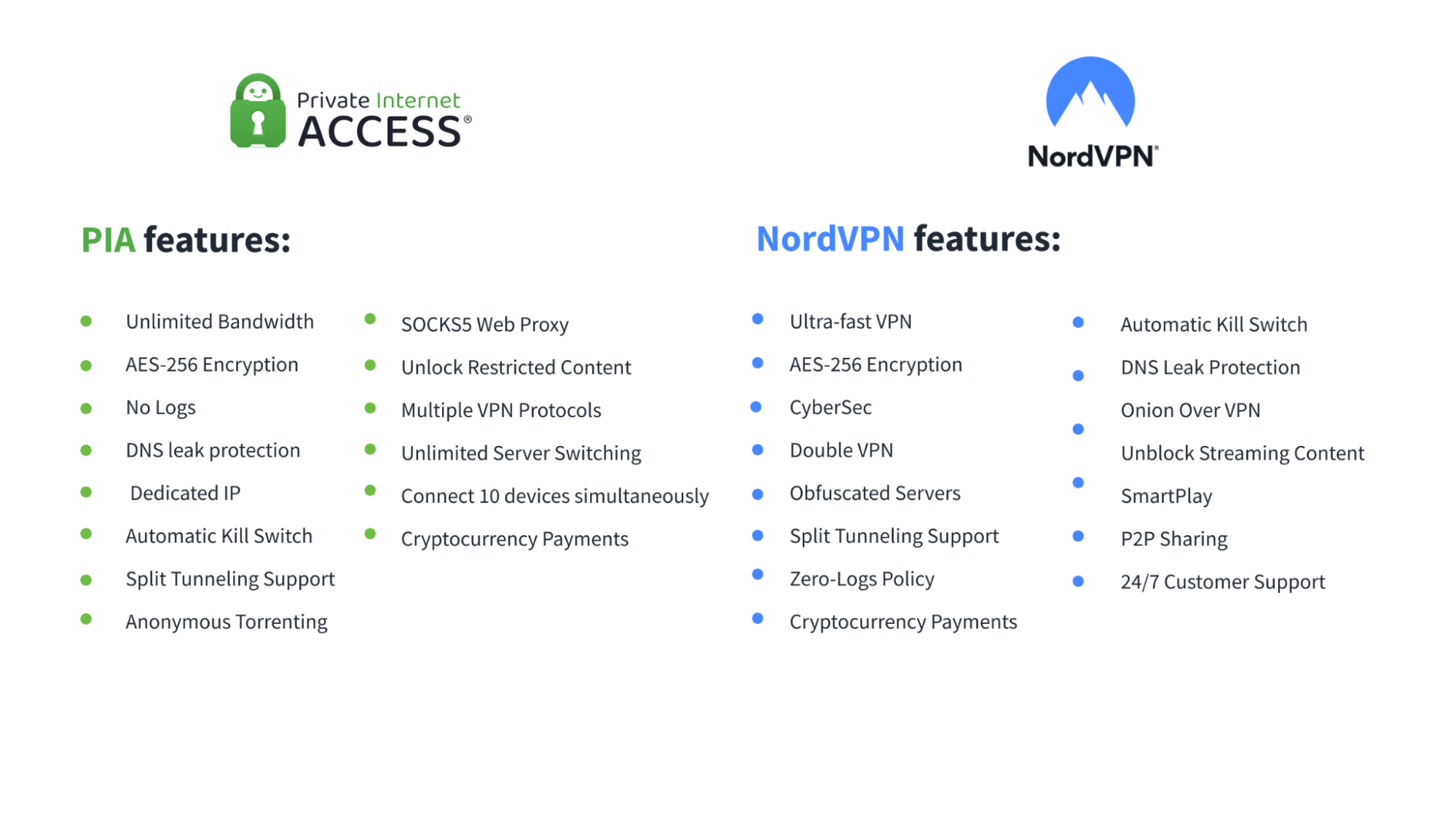 Here’s a quick look at the features of both providers.

Both VPNs are excellent, but NordVPN gets a higher rating because it’s faster and has the ability to unblock content on most streaming platforms, including Netflix, Hulu, and Disney+.

In comparison, PIA struggles to unblock most streaming platforms.

Private Internet Access falls short when it comes to customer support, with no live chat or phone options. Users have a knowledge base, community forum, and an online ticketing system for help.

NordVPN offers 24/7 live chat support for immediate assistance, along with email support and a help center for FAQs.

Plans and pricing: Which is more affordable?

Price is a significant factor when selecting a VPN client. No matter how many features a platform has, many users make their choice based solely on pricing. Here’s how PIA and NordVPN are priced.

Private Internet Access has over 15 million users and offers a monthly plan for $11.99 per month. This is ideal pricing for those who want to try out this VPN without signing up for a long-term plan.

They also have a very affordable 6 months plan for $7.50 per month. 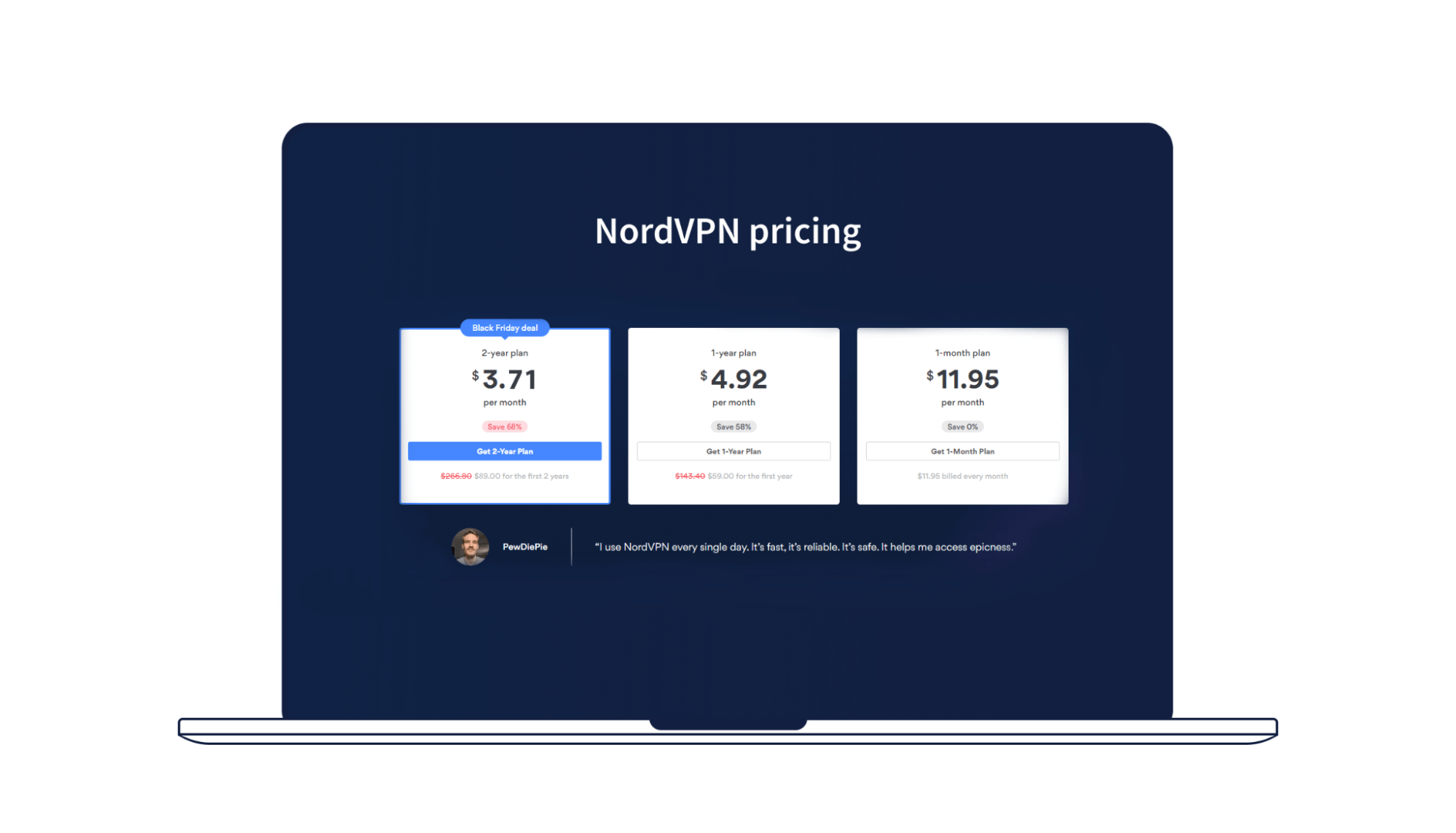 It offers three months free when users opt for the 2-year plan.

Alternatives to PIA and NordVPN 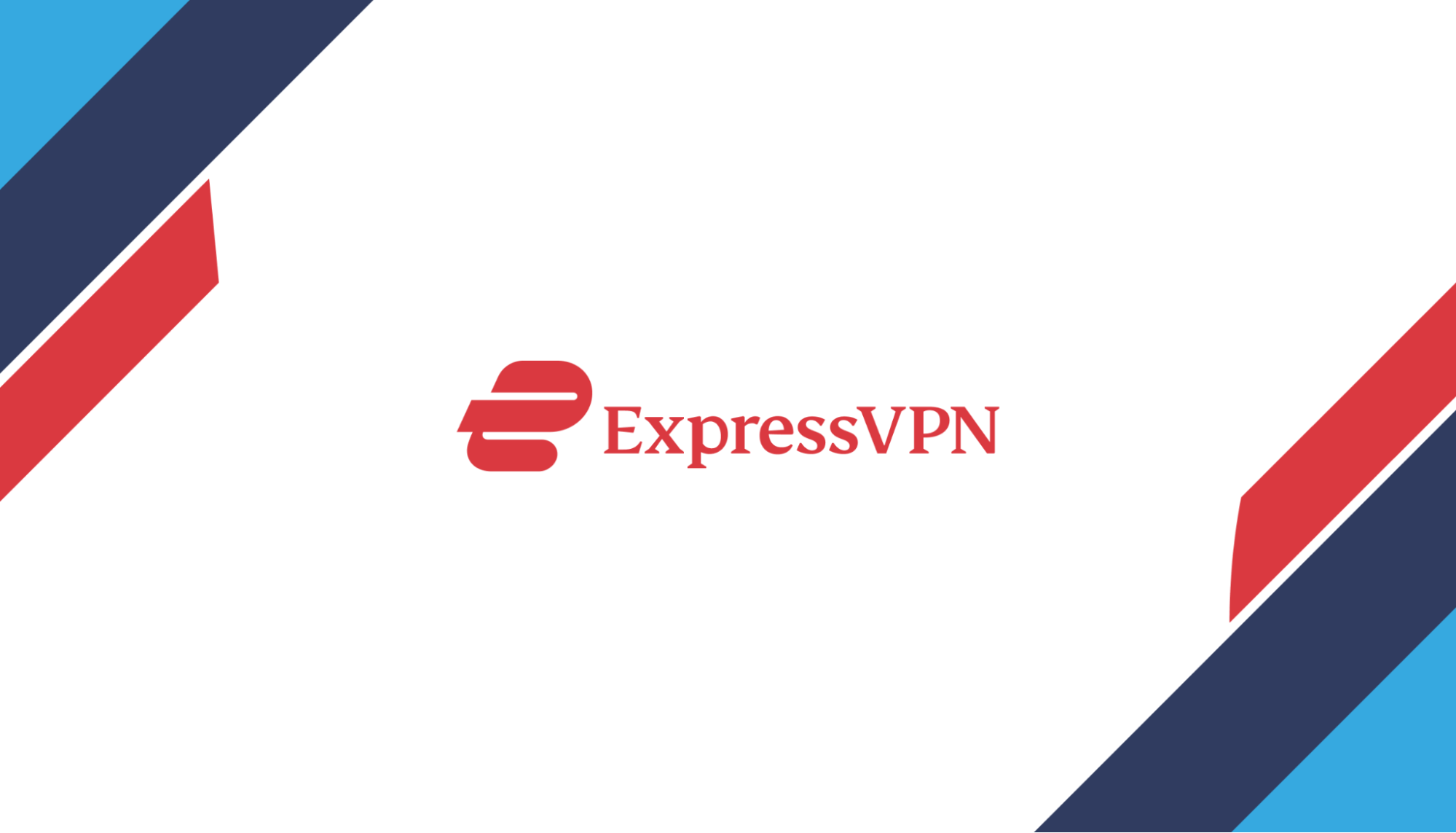 If both Private Internet Access and NordVPN aren’t the perfect fit for your needs, you can try out their industry-leading peers — ExpressVPN and Surfshark.

ExpressVPN is a renowned VPN with all the best privacy and security features. It offers incredible speeds and works with many streaming platforms.

It also stands out because of its TrustedServer technology, where all servers are RAM-only. This is also one of the rare VPNs that will work in China.

You can get a more in-depth look by reading our ExpressVPN review.

Surfshark is on par with ExpressVPN when it comes to privacy and security. It has a strict no-logs policy, kill switch, AES-256 encryption, and all the other features expected of a premium VPN.

It’s the most affordable high-level VPN out there, with the 2-year plan costing just $2.49 per month.

Surfshark also lets you connect unlimited devices via one account, which is excellent for individuals, families, and businesses.

Our Surfshark review explores the platform in more detail.

Your VPN choice ultimately comes down to personal preference, but it’s clear to see that NordVPN outperforms PIA in some areas.

If you want a super-quick VPN that unblocks streaming sites, NordVPN is the way to go.

If you’re looking for a proven industry veteran that is reliable and affordable, Private Internet Access is a better fit.

To learn more about VPNs and read in-depth expert VPN reviews, head over to our blog.

Private Internet Access vs NordVPN in 2023: Which should you choose?