Home > Blog > Is torrenting illegal? The ultimate guide to safe and legal torrenting

Torrenting is the most popular method used to access entertainment illegally. A 2019 survey showed that 5.7 million people in the UK access movies illegally on a regular basis.

Regardless of why people choose to torrent, the legality surrounding the practice is often misunderstood.

Some questions come up a lot. For example, people want to know if torrenting itself is legal, whether it’s safe, and how to avoid getting caught.

In this article, we’re going to take a look at the legality of torrenting and how you can keep yourself safe and secure while doing it.

Torrenting is the most popular form of peer-to-peer file sharing.

To put it simply, it’s the act of downloading and uploading files through the BitTorrent protocol and torrent network.

This requires you to use a torrent client like uTorrent or qBittorrent to connect to the network. These are free pieces of software you can get online.

When you torrent, rather than downloading a file from a central server, you’re downloading bits and pieces of a file from several different networks. These networks are other users who are currently downloading or have previously downloaded the file in question.

Because there is no central server, download speeds are faster.

Another aspect of torrenting is uploading files. As we mentioned, when you’re downloading torrents, you’re receiving files from other users. These users upload the torrent file after downloading it. 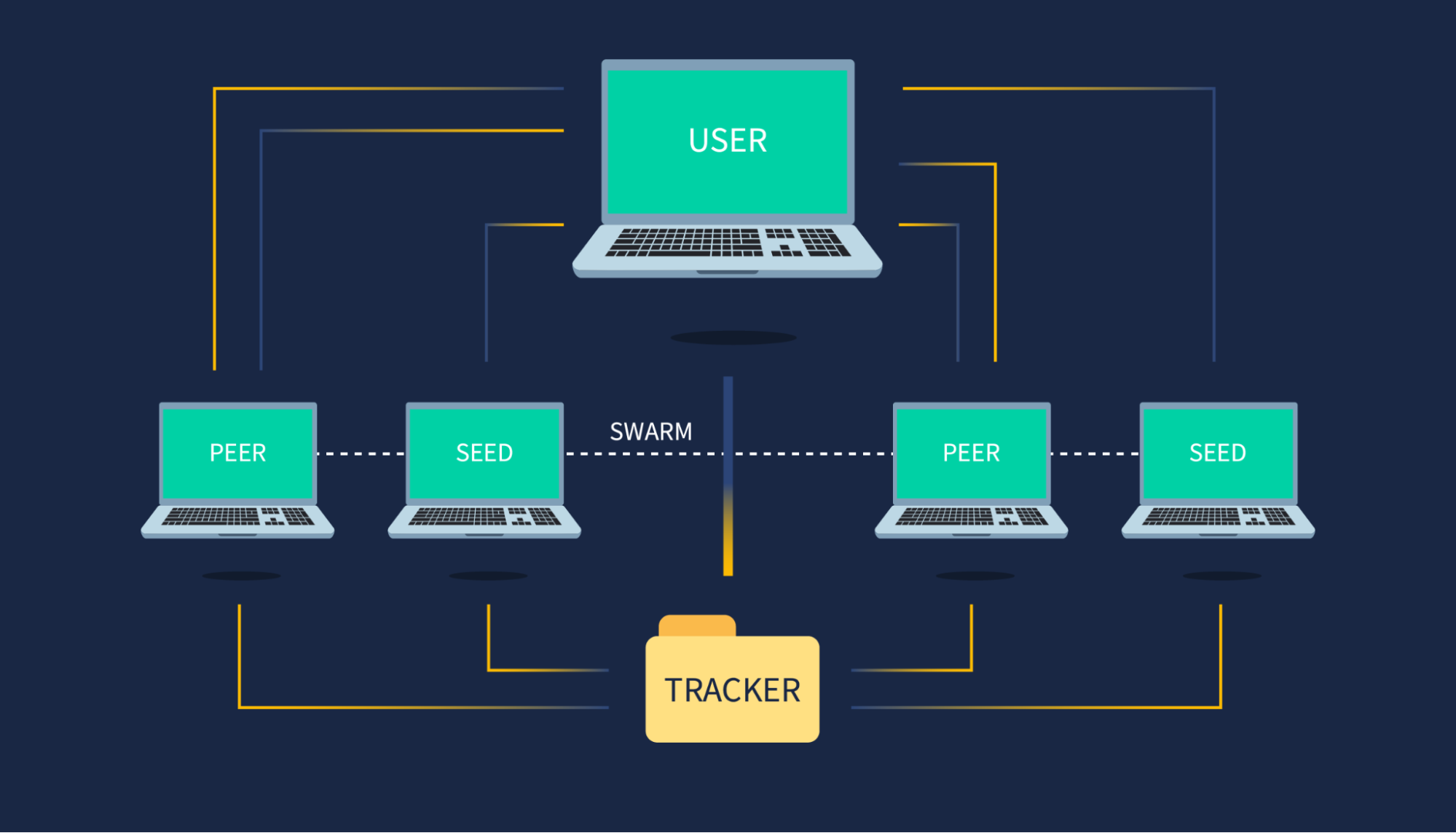 Anyone involved in the process, whether they’re downloading torrents or uploading, is a peer. Collectively, peers are known as swarms. Peers within a swarm can download and upload parts of the file to many different peers at the same time due to the nature of torrenting.

How does torrenting work?

Torrenting is a P2P protocol, meaning the peers in the swarm all transfer data to and from each other without the need for a central server.

To get into the swarm, you’ll need to load a .torrent file into your torrent client. This file isn’t the actual thing you’re trying to download — it’s a torrent tracker with the IP address of all members of the swarm. Loading the tracker into your BitTorrent client will connect you to the swarm.

If you’re currently downloading a torrent file, you’re a leecher (or a peer).

Leechers are members of the swarm downloading small bits of the torrent from other members.

Because you’ll likely be downloading torrents from many sources simultaneously, it tends to go faster than a traditional file coming from a central server. It’s also important to note that a central server can buckle under the stress of too many users, whereas a torrent cannot.

Once you’ve downloaded the torrent, you’ll also become a seeder.

Users connected to the swarm and have finished downloading the file begin uploading the file for others. If there is no one seeding a torrent, it’s impossible to download.

Each torrent client rewards members of the swarm who upload more by giving them faster speeds during the downloading process. It’s a way to encourage people to continue to upload after they’ve downloaded what they came for.

While torrenting is generally safe, there are a few best practices you should follow to protect yourself.

It’s easy to take a wrong turn while torrenting. Consumers engaged in piracy are 28 times more likely to get their devices infected with malware.

But that doesn’t have to be the case.

When choosing torrents to download, take a peek at the swarm size (that is, the number of seeders and leechers). While you want many seeders so that the torrent downloads quickly, there’s another reason you would want a large swarm.

Torrents with many peers are safer to download, as more people have vetted the torrent for malware and viruses.

The file-sharing community is vocal about which torrents are safe to download. If a torrent is infected, the odds are that someone will mention that in the comments.

If you do your due diligence before downloading a torrent, you should be able to stay safe in the long run. 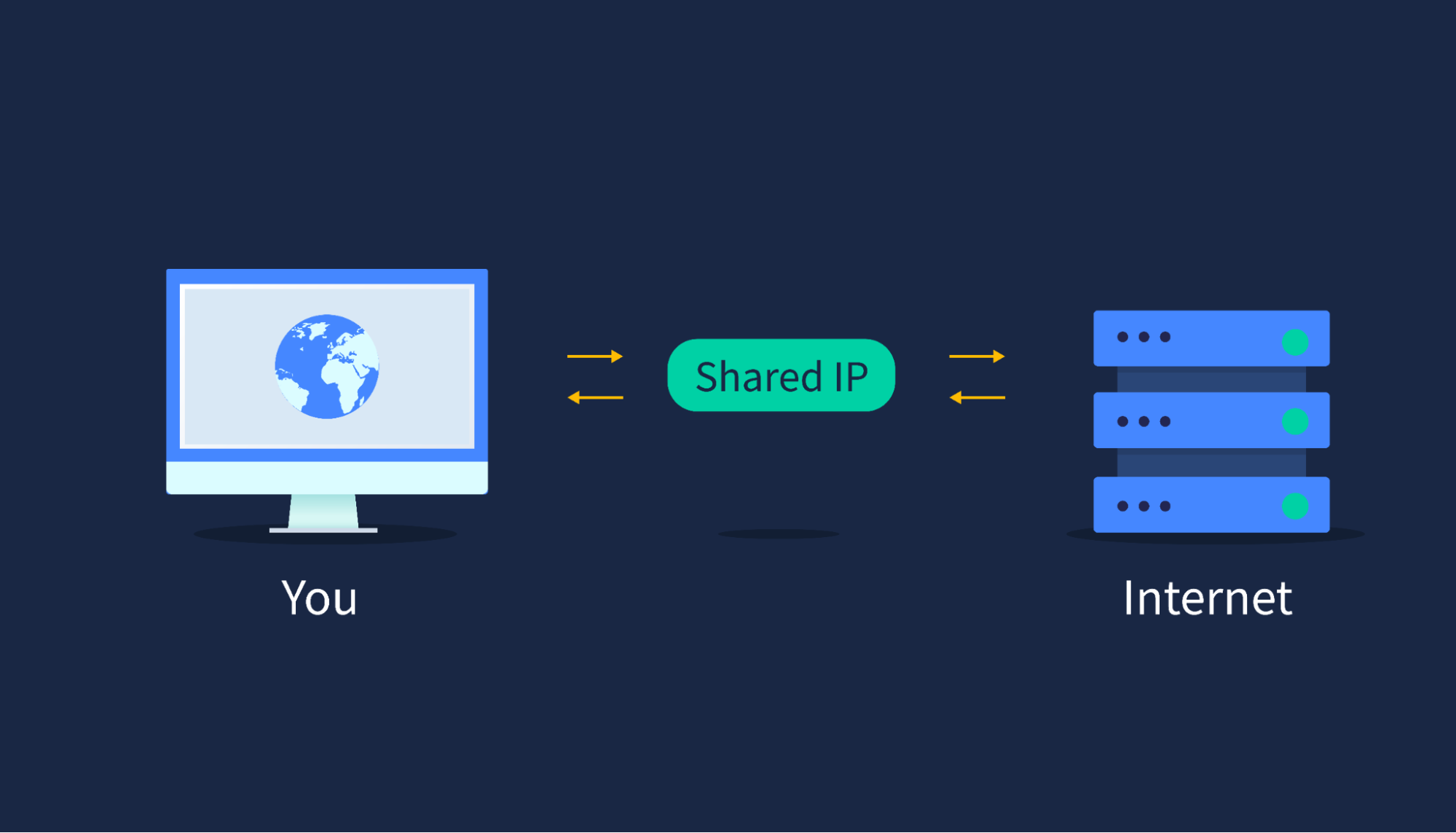 Torrenting is not illegal. It’s simply accessing a peer-to-peer network for file sharing.

However, copyright infringement is illegal, and many people use torrents for piracy.

The country you live in also plays a part in deciding legality. For example, in Switzerland, Poland, and Spain, illegally downloading copyrighted content is permitted for personal use only. However, uploading (which would be sharing) that material is illegal and could get you in trouble.

If you’re not living in one of those three countries, it’s safe to assume that downloading anything copyrighted could get you in trouble.

Some countries, like the United States and China, actively work to shut down torrenting sites.

Figuring out which torrents are illegal isn’t always obvious. In some cases, the legality is murky. Regardless, you could find yourself in possession of illegal material without even knowing it.

Can I get caught torrenting?

Yes, you can get caught torrenting. If you’re downloading illegal material, you’re always at risk of being caught and fined.

Your internet service provider can take notice when you’re using a peer-to-peer network and monitor what types of files you’re sharing. This is why many people rely on a VPN service to stay safe while torrenting. 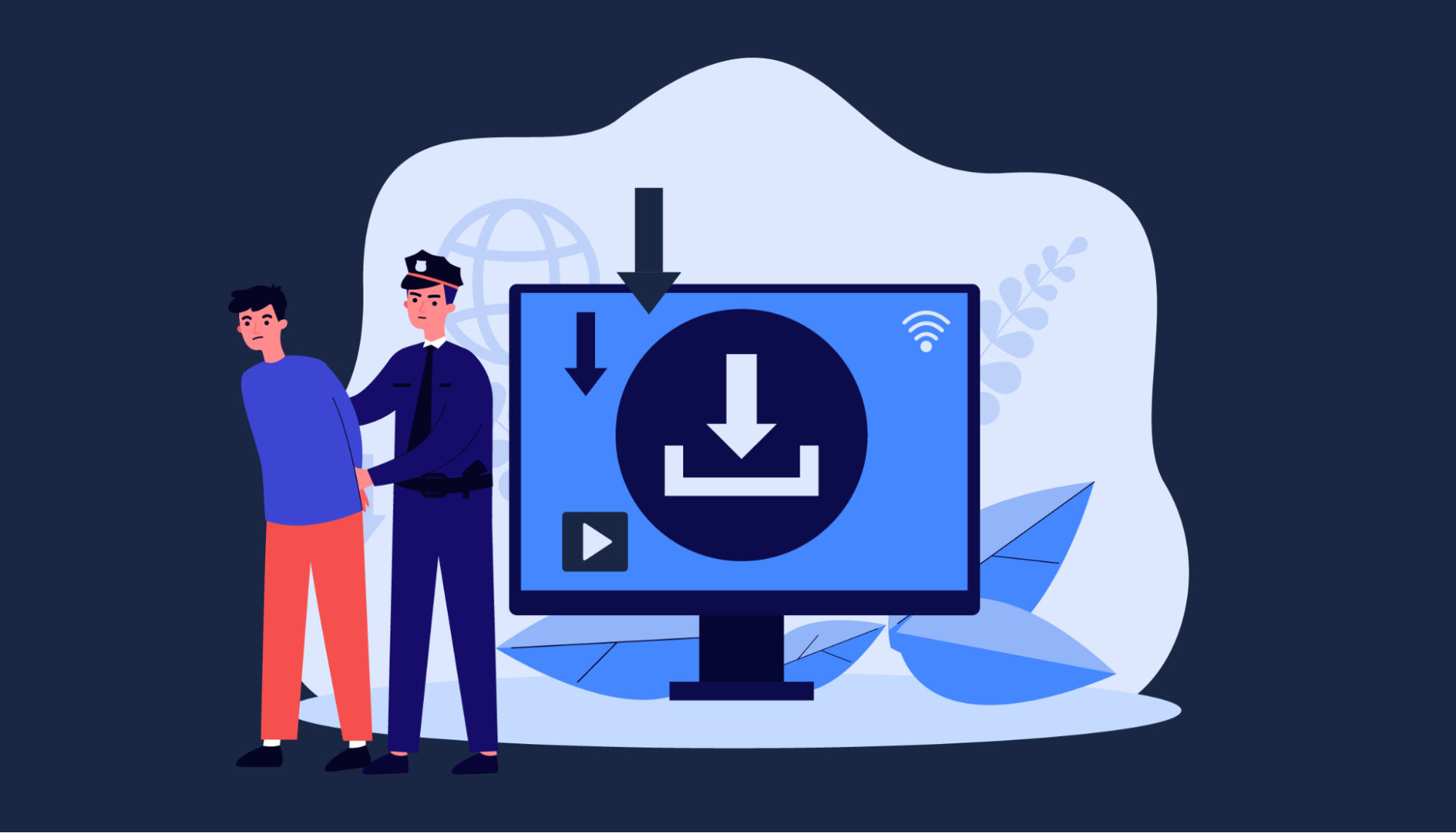 What are copyright trolls?

Copyright trolls are businesses that go after pirates. They look for individuals who are pirating using their real IP addresses and use that information to locate them.

Copyright trolls generally look at popular torrents to find malicious actors, so you can bet that they would be sniffing around torrents of the latest Marvel movie.

What happens if I get caught?

However, these are not legally binding documents, and you aren’t required to pay a fine given to you by these groups. They use fear and intimidation to get the torrent user to pay up, often threatening to sue for larger amounts if the smaller fine isn’t paid.

Anya Morgante of Toronto was asked to pay a $3,000 settlement for allegedly downloading and sharing The Hitman’s Bodyguard. She claims she has never even seen the movie.

If your ISP contacts you on behalf of a copyright troll, odds are they don’t have your identity yet. They want you to contact them and reveal yourself.

While you may avoid the copyright troll, your ISP could throttle your speeds to deter you from using P2P networks further.

How to protect yourself when torrenting

When you torrent online, it’s important to stay protected. Here’s how to do it.

A VPN is the most efficient way to protect yourself while torrenting.

We recommend ExpressVPN, a premium VPN provider optimized for peer-to-peer networks. It provides high speeds in all situations and even has specialized features like a Network Lock kill switch designed to keep you safe while torrenting.

A torrenting VPN helps you stay anonymous while torrenting by redirecting all of your internet traffic to a server of your choosing. When you do this, your true IP address is hidden. So if anyone were to snoop, they’d see the address of the VPN server that you’re connected to.

Because that IP address is shared, hundreds and thousands of VPN subscribers will be using it, making it impossible for them to identify you in the crowd.

Many VPNs have servers all over the world. For example, NordVPN has over 5,800 servers in 58 countries, giving you access to thousands of IP addresses.

Another important thing that a VPN does is encrypt your traffic before it leaves your computer. That means your ISP won’t be able to determine what you’re downloading or uploading.

However, not all VPNs are great at protecting users. Free VPNs will often expose you to DNS leaks and are extremely slow.

The best VPNs have DNS leak protection, provide high speeds, and have no-log policies. While ExpressVPN is our number one option, SurfShark and CyberGhost are other good choices that will keep you protected while torrenting. 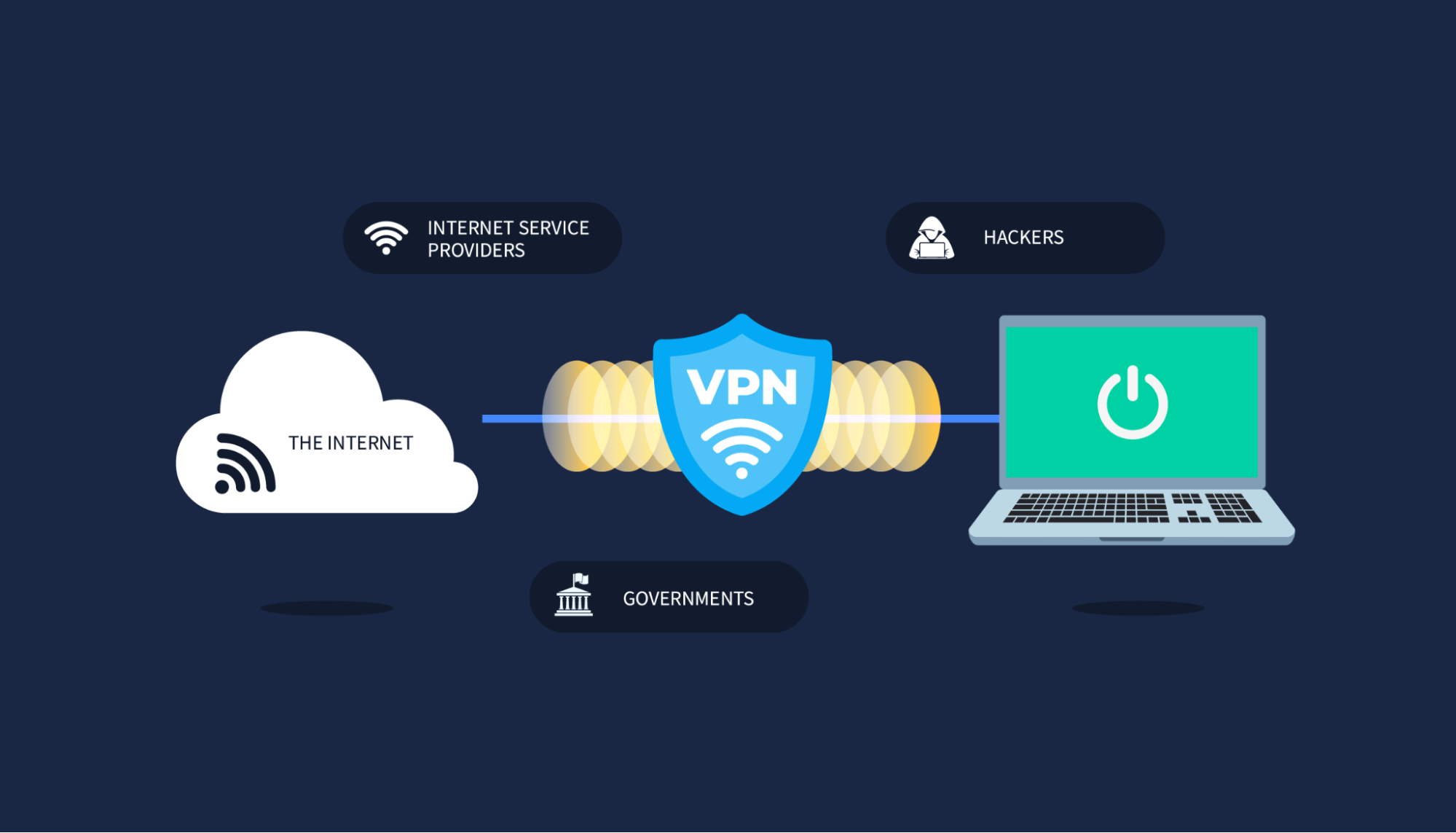 It’s worth reiterating that you need to be smart when picking torrents to download.

Torrents with a lot of activity are always safer than those with only a few peers. The more people who’ve tried a torrent, the more chances there are for someone to identify whether it’s infected with malware.

Before opening any .torrent file (or the finished download), always scan it with anti-malware or antivirus software. That’s how you can identify whether a file is infected before you open it.

You don’t want malware on your computer. Some malware can give hackers access to your files and even monitor your keystrokes to steal passwords and other information.

Just as some websites almost encourage illegal downloading, others are home to strictly legal files.

Do your best to stay on a reputable torrent site.

Here are a few:

However, using that network to break copyright law is illegal. Hollywood studios lose billions of dollars every year due to piracy in the United States alone. You can bet they’re willing to spend big money trying to stop it.

If you do torrent, even if you don’t use it to download illegal material, it’s important to stay safe. A VPN like ExpressVPN can help you stay anonymous online while stopping your ISP from seeing what you’re doing.