Online privacy and security have become a primary concern for most individuals and businesses. Whether it’s to avoid data breaches, protect their identity, or secure sensitive information, more and more users are turning to VPN software.

Users want a VPN that is fast and secure. Both of these factors are determined by your VPN protocol.

A VPN protocol is a set of rules and processes that dictate how a VPN service, such as ExpressVPN or NordVPN, creates the encrypted tunnel. All of your data passes through this tunnel and masks your IP address.

While there are many VPN protocols to choose from, IPSec and OpenVPN are two of the most popular.

In this article, we’ve listed different VPN protocols, delved into how IPSec and OpenVPN function, and explored the major differences between the two protocols. We’ve also recommended the five best VPN services for both. All of this information will help you decide which VPN protocol is the best for you. 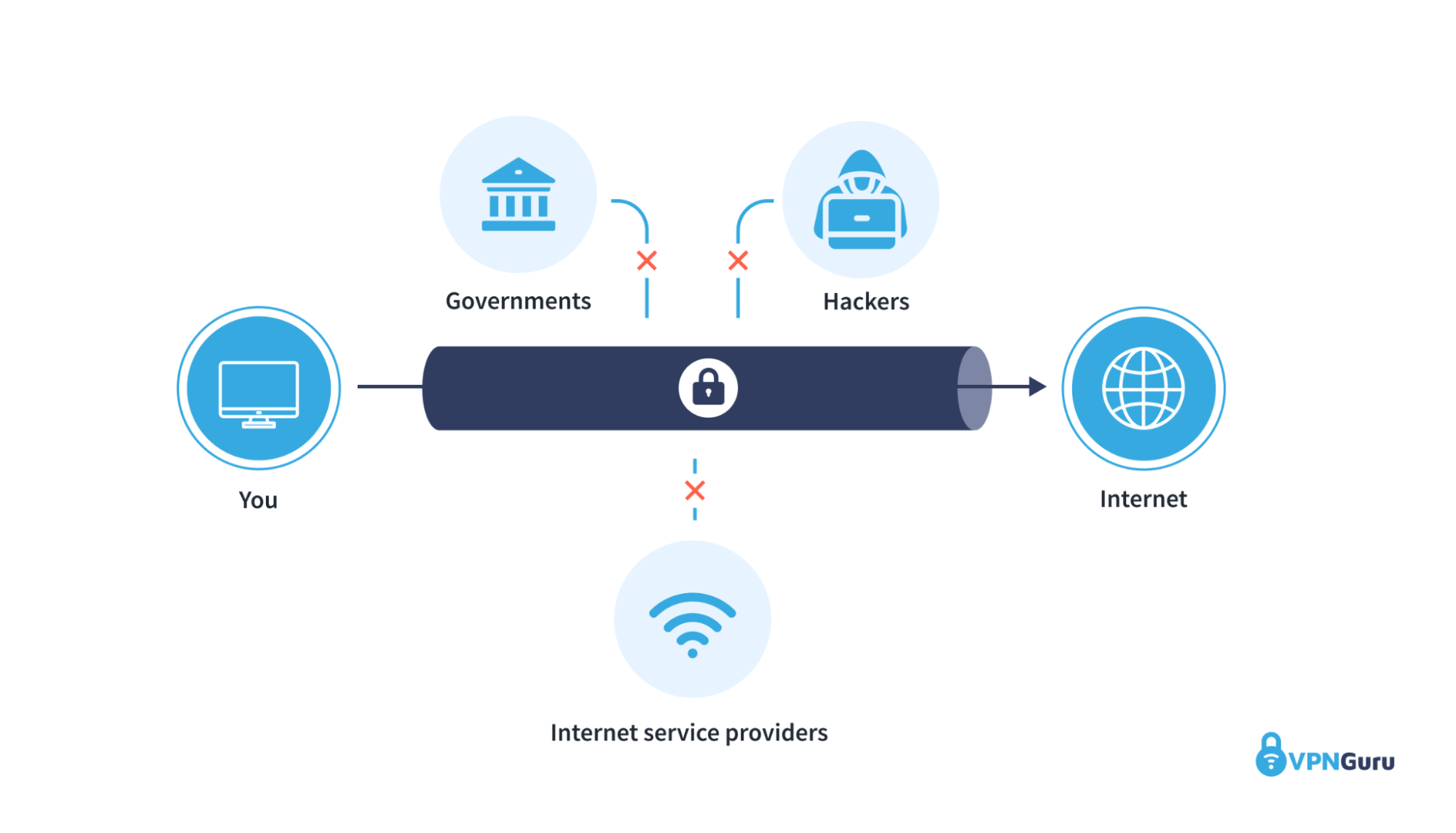 VPN protocols are a set of encryption standards and transmission protocols that dictate the stability and security of your VPN connection. When you connect to a VPN server, you do so through a VPN protocol.

Most advanced VPNs, like Private Internet Access, let users pick from three or more different protocols. Let’s take a look at some standard VPN protocols you might come across in your search for a VPN provider.

Point to Point Tunneling Protocol (PPTP) is the oldest protocol. Microsoft developed it in the mid-90s.

This protocol was embedded in most operating systems, starting with Windows 95. It is often bundled with Linux and Android. You can use PPTP without installing any third-party applications.

PPTP provides blazing fast speeds due to a lack of encryption and a lightweight encapsulation protocol.

Due to PPTP’s early implementation, it’s the least secure protocol out there. Recent devices no longer support it.

IPSec, or Internet Protocol Security, was developed by the Internet Engineering Task Force (IETF) in the 1990s. It has since become the standard protocol for securing online communication over an IP network.

IPSec is a flexible protocol that is focused on the authentication and encryption of data. It encrypts each individual IP packet in a particular communication. IPSec is used in many applications at the Internet Layer of the Internet Protocol Suite.

In most VPNs, IPSec is used in conjunction with L2TP (Layer 2 Tunneling Protocol).

L2TP is an upgrade to PPTP. It’s easy to set up on most operating systems and provides excellent connection speeds.

Internet Key Exchange version 2 (IKEv2) is also part of the IPSec protocol suite and is a widely used VPN protocol.

It’s one of the newest protocols and is secure, fast, lightweight, and stable. As a result, it’s an excellent protocol for mobile devices across all platforms.

Top-notch VPN providers like Surfshark use IKEv2 due to the protocol’s significant strengths. The only downside is that IKEv2 is exclusively available on UDP ports, which some firewalls can block. 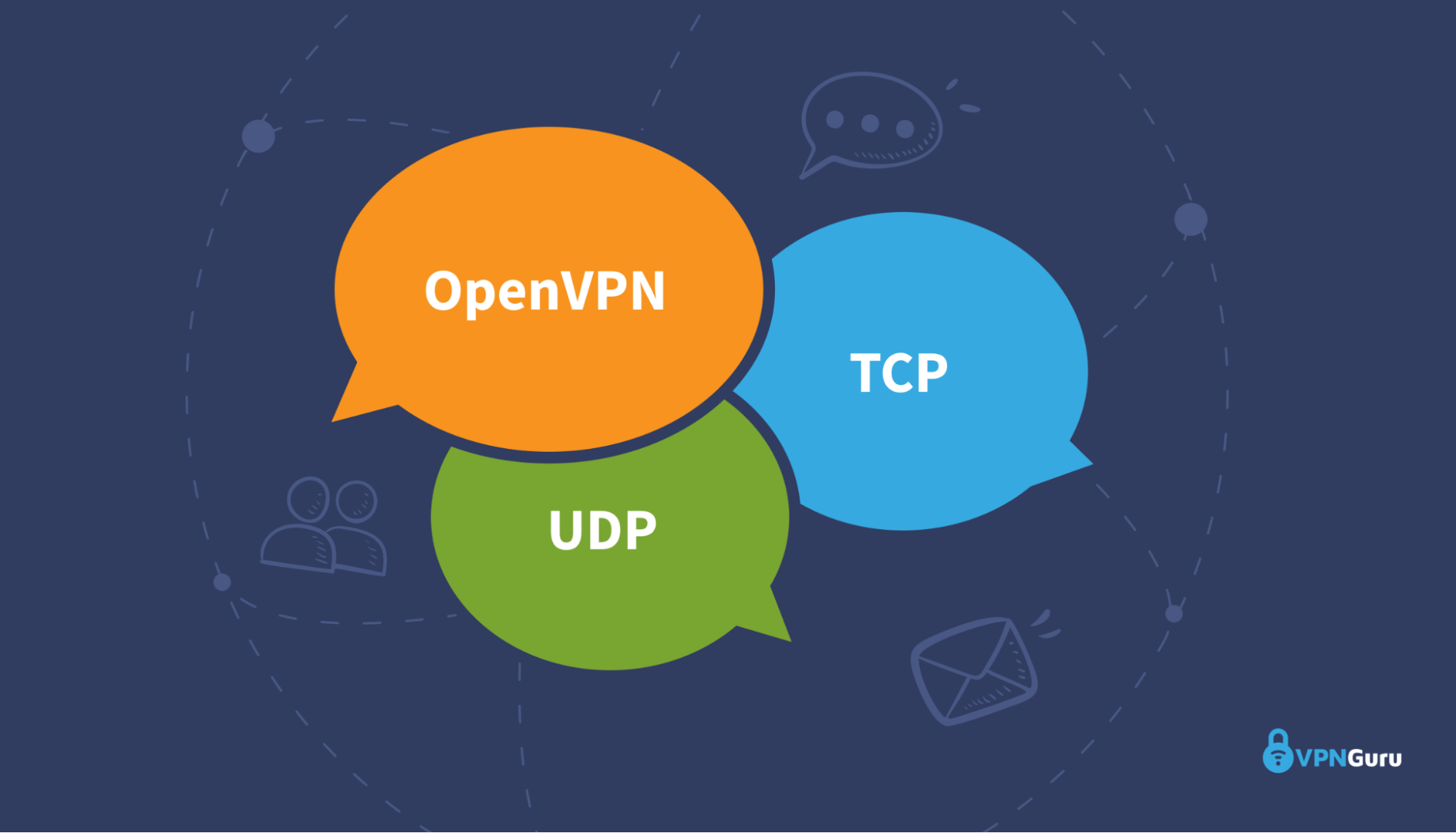 OpenVPN is a fully open-source VPN protocol that is highly configurable. An open-source protocol has significant security advantages since the community can identify any security flaws in the code.

The protocol also features a robust encryption algorithm and is one of the most reliable VPN protocols.

WireGuard is a newer open-source VPN protocol that is currently under development by Edge Security LLC. The protocol is among the fastest available today and uses only 4,000 lines of code. That’s significantly less than other protocols.

WireGuard is also open source and thus, can be scrutinized by anyone to find security flaws. However, some VPN providers are reluctant to use this protocol as they fear that significant security issues could be found in the future.

Now that we’ve gone through the common VPN protocols, let’s take a closer look at the two most popular options — IPSec and OpenVPN — to understand how they differ and when you should use each.

Most operating systems, including Windows, macOS, Android, and iOS, have native support for IPSec. This means that you don’t need a third-party application to install and use this protocol. Instead, users can import configuration files to their servers and implement it.

Setting up IPSec protocols can be pretty complicated, but these days, the protocol is more commonly used via the IKEv2 protocol on third-party VPN apps.

OpenVPN does not have native support but can easily be used by installing client software. Most VPNs, including Surfshark and CyberGhost, let you choose OpenVPN(UDP) and Open (TCP) to establish a connection.

Both OpenVPN and IPSec offer similar speeds, depending on many variables. This includes device specifications, your network, and connection ports.

OpenVPN is faster than L2TP/IPSec but isn’t as fast as IKEv2. That’s because OpenVPN relies on user-mode encryption and consumes more CPU resources than IKEv2, depending on your configuration.

IKEv2 also has newer architecture and a request-response mechanism. It uses a UDP port to reduce latency.

But it’s worth noting that in its default state, OpenVPN(UDP) provides comparable speeds to IKEv2.

OpenVPN, L2TP/IPSec, and IKEv2 secure your connection with the AES-256 encryption protocol.

OpenVPN uses the OpenSSL library for encryption and supports various algorithms and ciphers, including Camellia, ChaCha20, AES, and Blowfish.

OpenVPN is fully open-sourced, which makes it easier to find security flaws in the code. The protocol is known to be secure, and no security breaches have been detected since its launch.

Both L2TP and IKEv2 are not open-source software, but they are equally secure. IKEv2 also features Perfect Forward Secrecy, an encryption system that constantly changes the keys used to encrypt and decrypt information. So, even if the current key is compromised, only a small part of sensitive user data will be exposed.

OpenVPN (TCP) offers the most reliable connection, especially while roaming on cellular networks and Wi-Fi, along with networks where packet loss and congestion are typical. However, using a TCP port sacrifices speed for reliability.

Additionally, OpenVPN’s ability to operate both on UDP and TCP makes it easier to hide the fact that you’re using a VPN.

Out of the IPSec stack, IKEv2 is the best in terms of speed, reliability, and security.

The OpenVPN protocol is the clear favorite for streaming and torrenting since it can easily bypass restrictive firewalls. The protocol also enables advanced security features like multi-hop and port forwarding.

However, if you don’t want to install third-party software or use a VPN primarily on your phone, the IPSec/ IKEv2 is the way to go. IKEv2 uses MOBIKE to keep the VPN service connection, even when the network changes.

IKEv2, however, is easier to detect for some firewalls. It fails to unblock restricted content in many cases.

L2TP/IPSec might have been a popular choice before because it facilitates online anonymity, but most users these days prefer OpenVPN due to the protocol’s heightened security measures.

The best VPNs for IPSec and OpenVPN 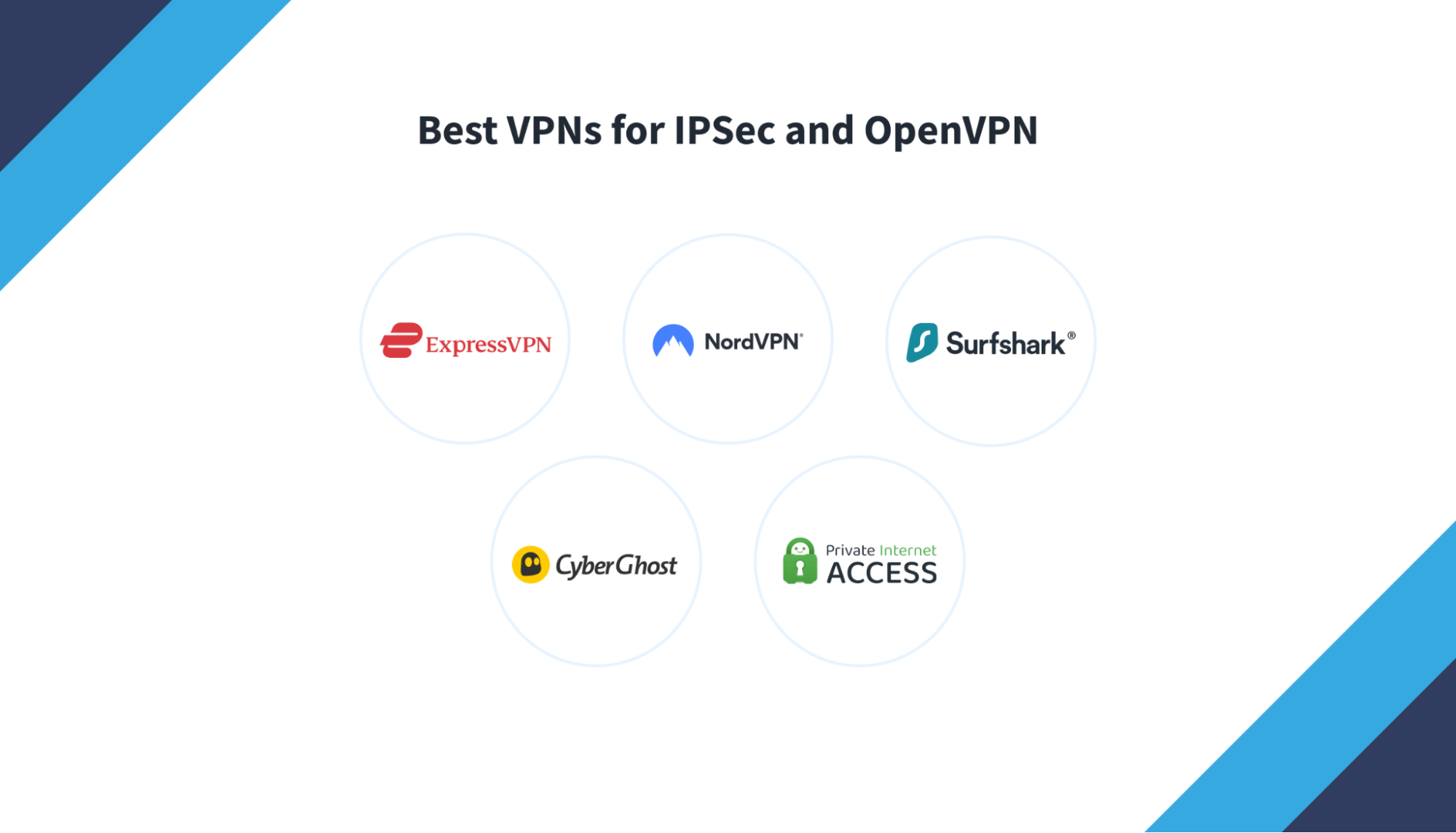 Whether you want to use IPSec/L2TP, IKEv2, or OpenVPN, here are five VPNs that offer the latest protocols in addition to advanced security and privacy features.

ExpressVPN is renowned for its commitment to online privacy. The provider offers IPSec/L2TP, IKEv2, and OpenVPN protocols. Users can also opt for ExpressVPN’s proprietary, open-source Lightway protocol, which promises a fast and secure connection.

Regardless of what you intend to use a VPN for, ExpressVPN has got your back. With thousands of RAM-only servers spread across 94 countries, ExpressVPN prioritizes online anonymity.

All of its servers employ TrustedServer technology, ensuring that user data is never written on a hard drive. The VPN client also has a strict no-logs policy, meaning it never stores user activity logs. ExpressVPN can’t hand over your online data to third parties since the provider does not collect any sensitive information to start with.

ExpressVPN is also among the rare few VPNs that can bypass China’s Great Firewall — a never-ending list of online restrictions put in place by the Chinese government.

Read our ExpressVPN review to truly understand why this VPN solution is top of the game.

Surfshark is an industry-leading VPN that works with IKEv2 and OpenVPN. You can also choose its WireGuard protocol or use the provider’s Shadowsocks proxy.

The VPN provider claims that WireGuard is its fastest protocol and recommends it for all use cases, including streaming and gaming.

You can use OpenVPN when using Surfshark’s Windows or macOS apps and IKEv2 for Android and iOS apps. By default, IKEv2 is the protocol on all of its apps.

Surfshark offers the best security features and unique features, like its NoBorders mode or Camouflage mode, at an affordable price. You can use unlimited devices on one subscription and keep all your devices protected.

Read our Surfshark review to understand this provider’s potential.

NordVPN is another top VPN that has everything you could want in VPN client software. The provider lets you choose between IKEv2/IPSec, OpenVPN, and its unique NordLynx protocols.

By default, most of its VPN apps use NordLynx, which is its version of the WireGuard protocol. The company claims that NordLynx is the fastest protocol while also being ultra-secure.

Regardless of the protocol you choose, NordVPN uses obfuscated servers. These special servers hide the fact that you’re using a VPN while not compromising on speed or security.

NordVPN offers 5251 servers in 60 countries and successfully unblocks content on many major streaming platforms like Netflix and BBC iPlayer. Multi-factor authentication, split tunneling support, and Onion Over VPN are other notable NordVPN features.

Our NordVPN review delves into the pros and cons of this popular service.

Private Internet Access (PIA) is a well-known VPN provider that has been in the industry for more than a decade. It offers WireGuard and OpenVPN — the two latest protocols — on most platforms, while iOS users get IPSec for better security.

You can also connect via its Shadowsocks and SOCKS5 proxies. These proxies add another layer of protection since you can use them to route your connection through an additional server location.

Head over to our Private Internet Access review to get an unbiased, in-depth look at this provider.

Like PIA, CyberGhost also relies on the latest protocols. Its users can select from OpenVPN, IKEv2, L2TP/IPSec, and WireGuard protocols when connecting to one of its 7200 servers in 91 countries.

macOS and iOS users have access to IKEv2 or WireGuard only, while Windows users can use all four.

CyberGhost recommends using IKEv2 when the server you’re connecting to is close to your actual physical location and L2TP/IPSec if security is your main priority.

You can connect to CyberGhost’s special streaming and torrenting servers to unblock restricted content on streaming sites and game without lagging.

CyberGhost is anti-censorship and headquartered in Romania, which is not part of the Five Eyes or Fourteen Eyes intelligence alliances. The provider also has a no-logs policy.

Our CyberGhost review covers the provider’s offerings in detail.

Choosing between IPSec and OpenVPN

OpenVPN is the ideal choice for most consumers. It’s secure, fast, and readily available with most providers, including ExpressVPN and Surfshark.

Using IPSec without a third-party app requires a thorough setup, ideally by a professional. However, when set up right, this protocol is also secure and fast. Alternatively, you could use a VPN service that uses IPSec with other protocols, like IKEv2.

You can find out more about VPNs on our blog and also read tons of expert VPN reviews.