Home > Blog > The fastest VPN: Which VPN has the best speeds?

The fastest VPN: Which VPN has the best speeds?

Using a virtual private network (VPN) is the best way to protect your personal data on the internet. But not every VPN provider is the same.

Speed is one of the biggest points of divergence. Some VPNs have such high speeds you’ll forget they’re running at all. Others are so slow you can hardly load your homepage.

We’re here to help with a common question: how can you tell how fast a VPN is before you spend money on it?

We’ve tested all the top VPNs, so you don’t have to, and reached an answer about which is the fastest VPN service of all. Read on to learn which VPN has the best speeds and which ones you should leave in the dust.

How do you test VPN speed? 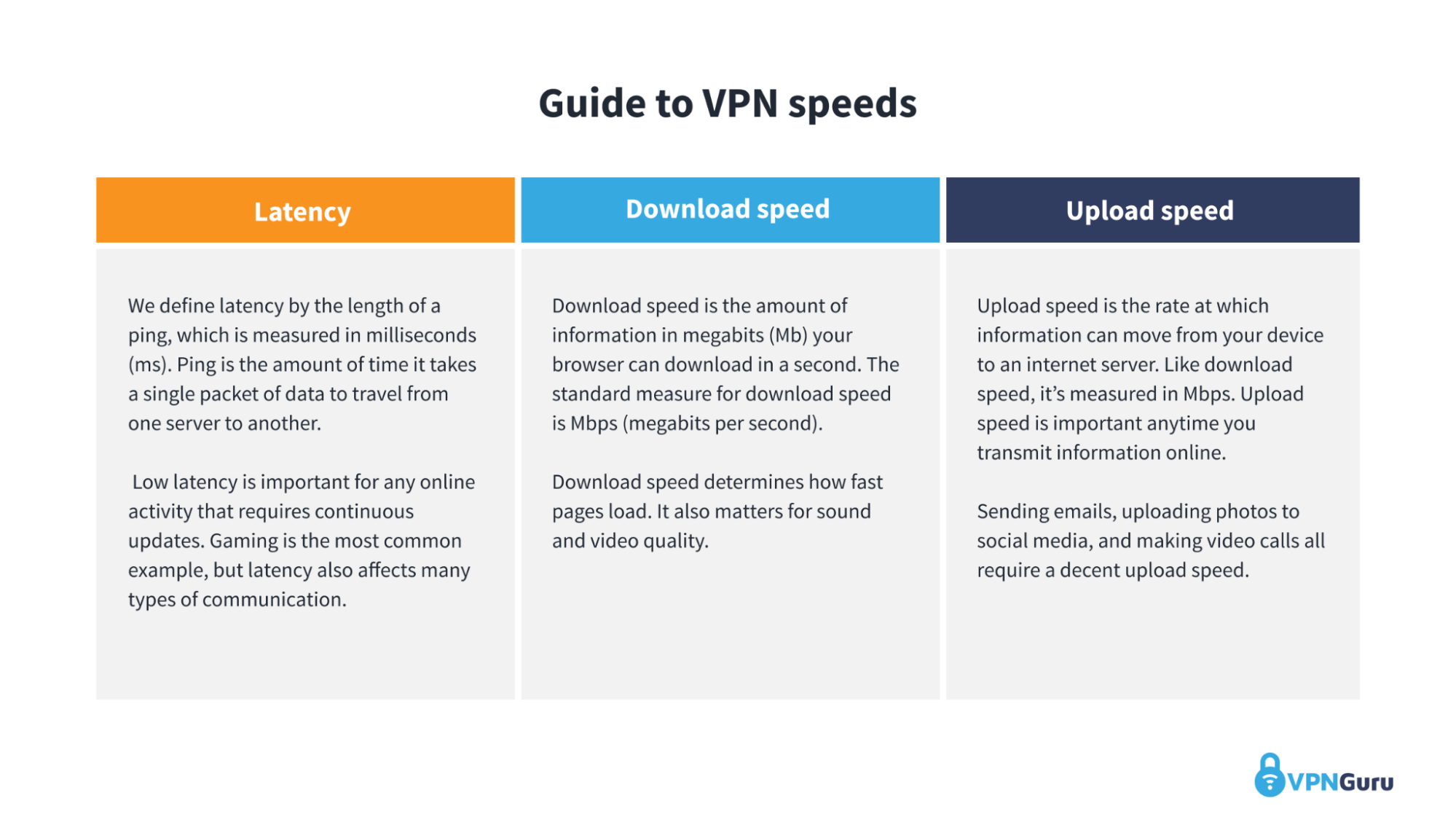 Since we’re going to be talking about it for the whole article, it’s worth spending some time defining what we actually mean by “the fastest VPN.”

In a way, a fast VPN service is the opposite of a fast web browser. We consider a web browser fast if it loads pages quickly.

By contrast, a VPN is always going to slow down your browser at least a little. Your internet connection has to pass through an extra VPN server to hide your IP address. The VPN also encrypts all your traffic, which takes some time.

So, while we’ll discuss which VPN is the fastest, it’s more accurate to think of it as the least. The speed of a fast VPN service won’t be noticeably different from your browser speed without any protection. A slow VPN will make your internet drag much more than normal.

We used speedtest.net to test VPN speed. It measures three kinds of speed: latency, download speed, and upload speed. Each one is important for different tasks.

We define latency by the length of a ping, which is measured in milliseconds (ms). Ping is the amount of time it takes a single packet of data to travel from one server to another. Low latency is important for any online activity that requires continuous updates. Gaming is the most common example, but latency also affects many types of communication.

Download speed is the amount of information in megabits (Mb) your browser can download in a second. The standard measure for download speed is Mbps (megabits per second). Download speed determines how fast pages load. It also matters for sound and video quality.

Upload speed is the rate at which information can move from your device to an internet server. Like download speed, it’s measured in Mbps. Upload speed is important anytime you transmit information online. Sending emails, uploading photos to social media, and making video calls all require a decent upload speed.

Why do VPNs have different speeds? 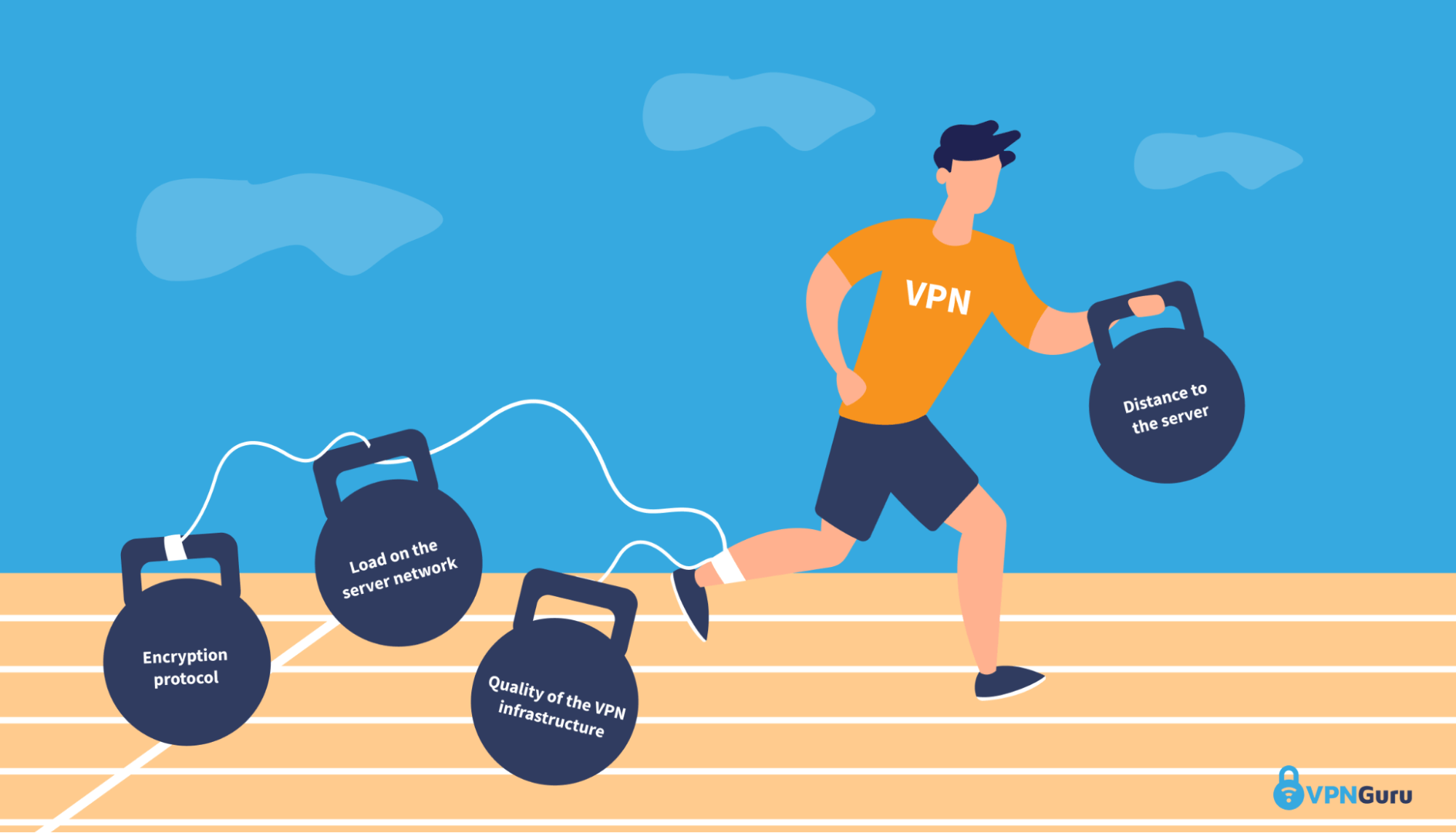 Several factors determine whether one VPN connection is faster than another. In our VPN speed test, we tried to control as many of these variables as possible.

We tested each VPN with the OpenVPN protocol, which almost every provider on the market supports. In the end, we came up with six clear winners. 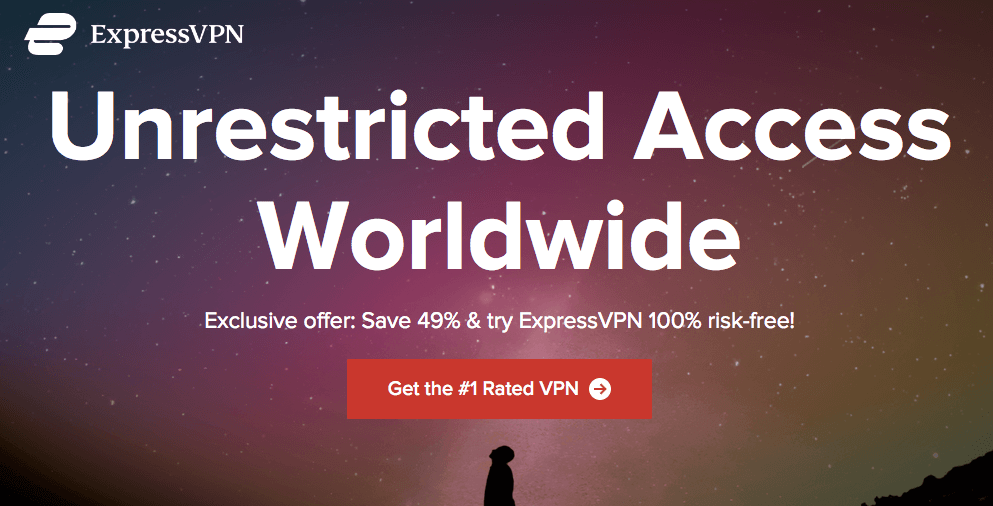 ExpressVPN is the best all-around VPN on the market. No other service does such a clean job of balancing everything that makes a premium VPN. But is it built for internet speed? 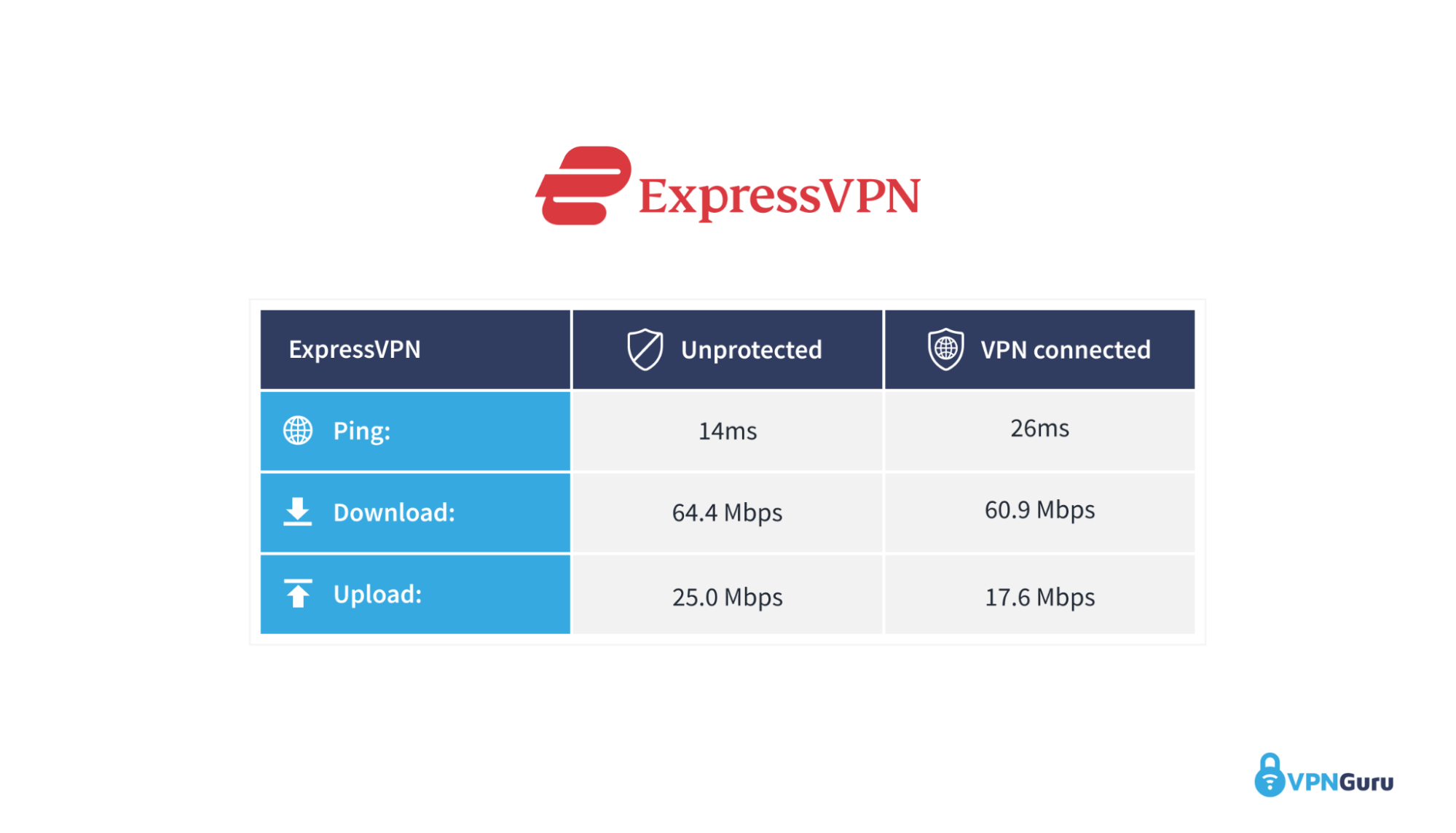 The answer is a definite yes. Speed isn’t just one of ExpressVPN’s many good points — it might be its strongest selling point of all.

ExpressVPN’s speed starts with its large server network. It’s got over 3,000 total servers in 160 locations across 94 countries. That infrastructure is more than capable of dealing with high traffic.

ExpressVPN also supports two of the fastest protocols on the market. There’s WireGuard, the advanced open-source protocol you’ll be hearing a lot more about on this list. However, Lightway is even more impressive. An exclusive protocol developed in-house by ExpressVPN, Lightway is often faster than WireGuard and always just as secure.

We also like that you can install it on your router. Every device that connects through a VPN-protected router is also covered by the VPN, making subscription limits a non-issue. And did we mention it comes with unlimited bandwidth?

In our speed tests, ExpressVPN created a fast and steady internet connection every time, even on popular servers at peak times of the day. Our unprotected connection speed was a 14 ms ping, 64.4 Mbps download, and 25.0 Mbps upload.

We let ExpressVPN pick the fastest server, which was close by us in the United States. After connecting, we got a 26 ms ping, 60.9 Mbps of download speed, and 17.6 Mbps of upload speed.

Upload speed dropped about 30%, which is fairly standard. The real story is the latency and download speed, both of which hardly dropped at all. For comparison, many VPNs get up to 10x your unprotected latency just by connecting on the other side of the U.S.

ExpressVPN puts internet speed first, and it shows. Its blazing speeds make ExpressVPN one of the easiest VPN providers to recommend to anyone.

Visit our in-depth ExpressVPN review to get the full story. To see it go up against a direct competitor, check out Avast VPN vs ExpressVPN.

One of the most noteworthy things about Surfshark is how new it is. Though founded as recently as 2018, it can go toe-to-toe with competitors like ExpressVPN and NordVPN, which have been around much longer. 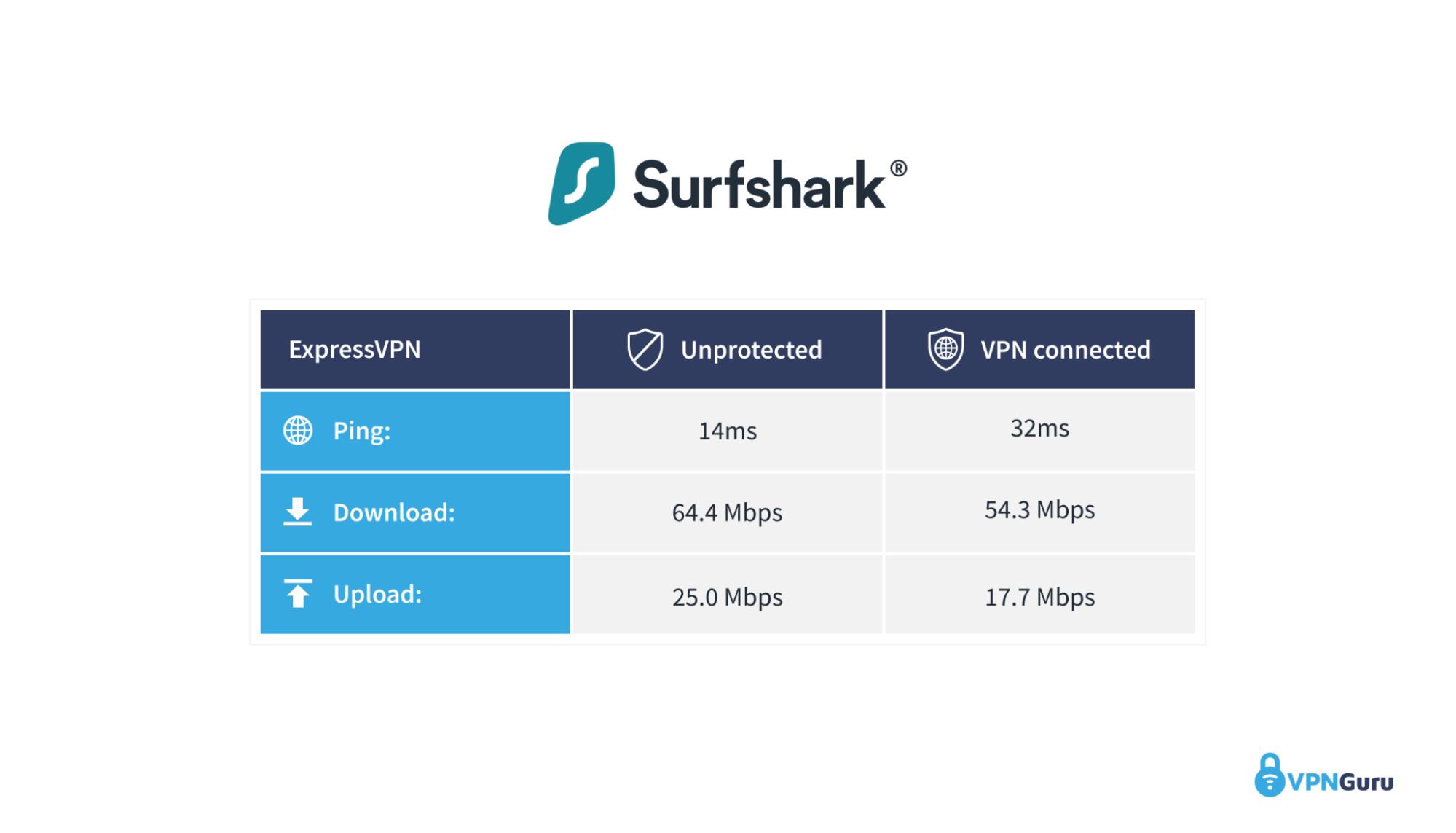 As a more basic VPN provider, Surfshark won’t necessarily offer the range of control features you get with CyberGhost. But what it does, it does very well. Surfshark is user-friendly, cheap, and has a perfect security record — but above all, it’s fast.

Surfshark doesn’t have an exclusive protocol, but it does support the two fastest open-source protocols, OpenVPN and WireGuard. With about 3,200 servers across 65 countries, its large server network keeps things running smoothly for users on every continent.

Nevertheless, Surfshark is one of the fastest VPNs you can buy in 2022. We can’t wait to see how it improves as its infrastructure gets even stronger. 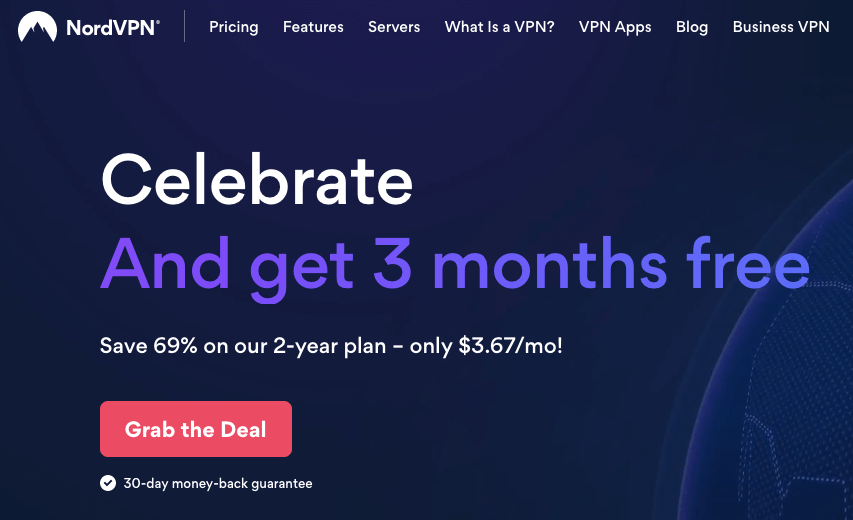 NordVPN consistently scores high in every area that matters when choosing a VPN. 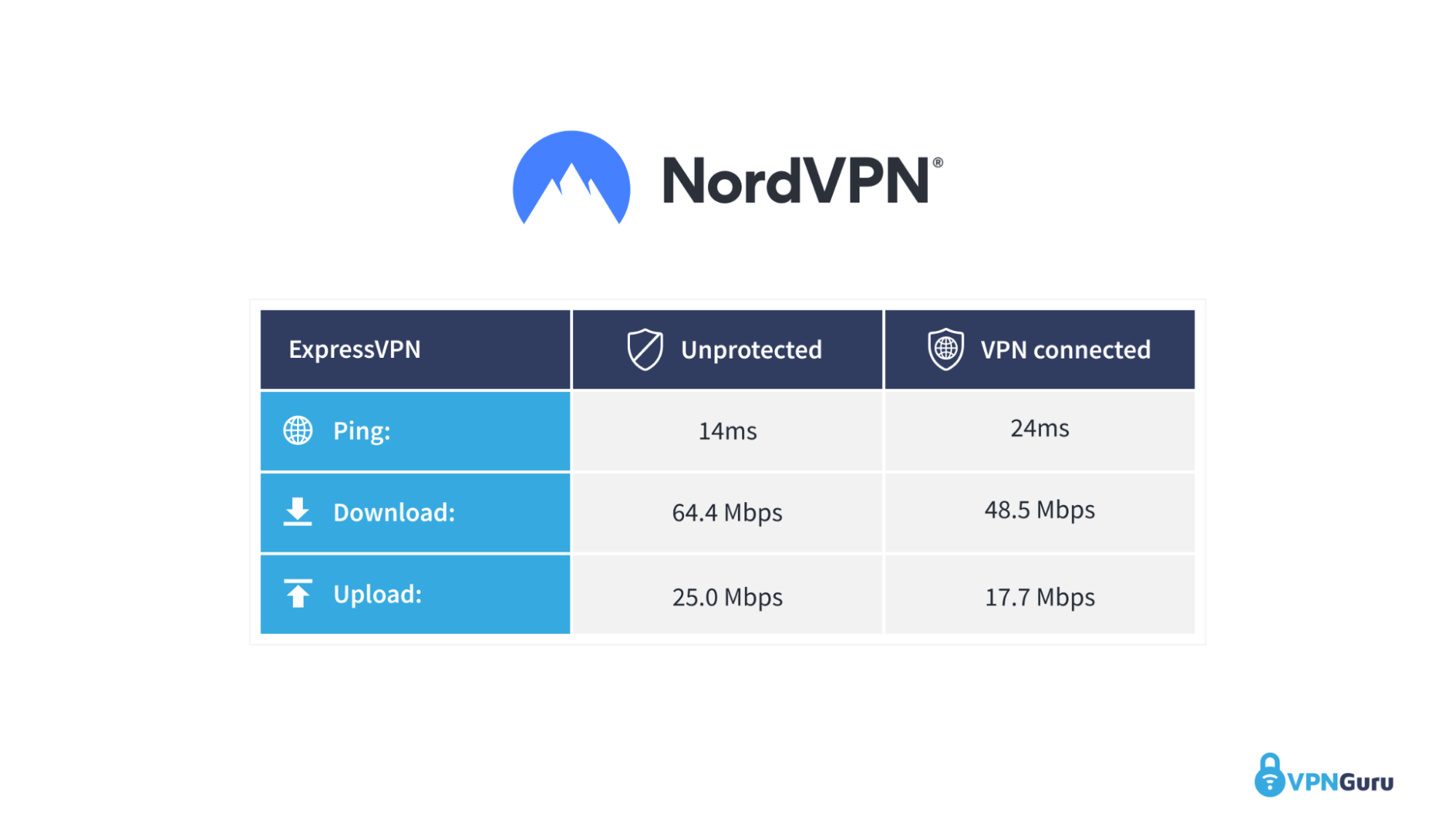 First, it’s secure. NordVPN only supports several protocols. It has OpenVPN, IKEv2, and NordLynx. It also implements WireGuard, which is active by default. All these protocols are trusted by experts and employ nigh-impenetrable AES-256 encryption.

It’s also great for streaming. VPNs commonly fail to access streaming services, which ban them to avoid copyright problems. But NordVPN, like Surfshark and ExpressVPN, conceals its own activity so well that streaming platforms don’t recognize it as a VPN. We also found that NordVPN works well for torrenting.

While that’s all great, there’s no point in a secure, capable VPN if it’s too slow to use. How fast is NordVPN?

Latency was the best result. NordVPN only added 10 ms to our ping, which is outstanding. Download speed fell by only 25% — slower than Surfshark but much faster than average. Upload speed was almost totally unchanged from our first two VPN tests.

In other words, NordVPN is a very strong choice for speed.

It has also got an immense server network, with about 5,250 individual nodes. Only Private Internet Access and a few others can boast nearly that many. That makes NordVPN excellent at handling heavy user loads.

Our NordVPN review has even more information. You can also check out NordVPN vs PIA or IPVanish vs NordVPN to see it in head-to-head matchups with some other heavy hitters. 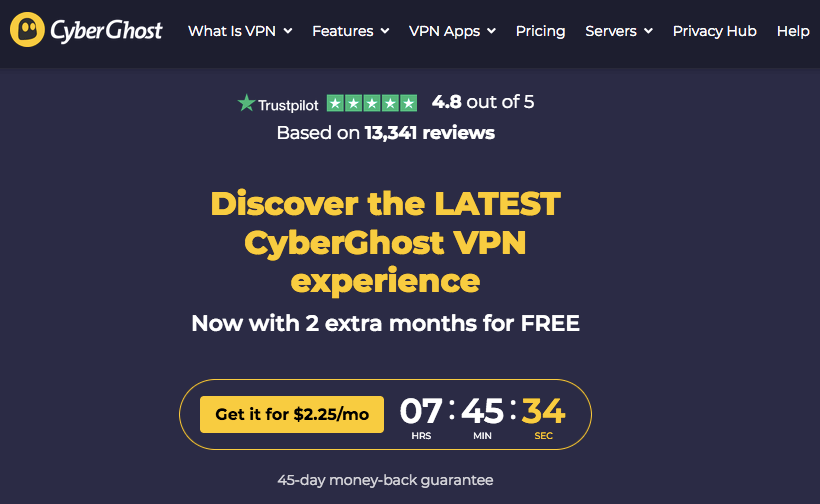 CyberGhost is a dark-horse VPN. Built to promote civil liberties and free online discourse, it has also managed to lock down exceptionally fast speeds unless you’re connecting to a very distant server location. 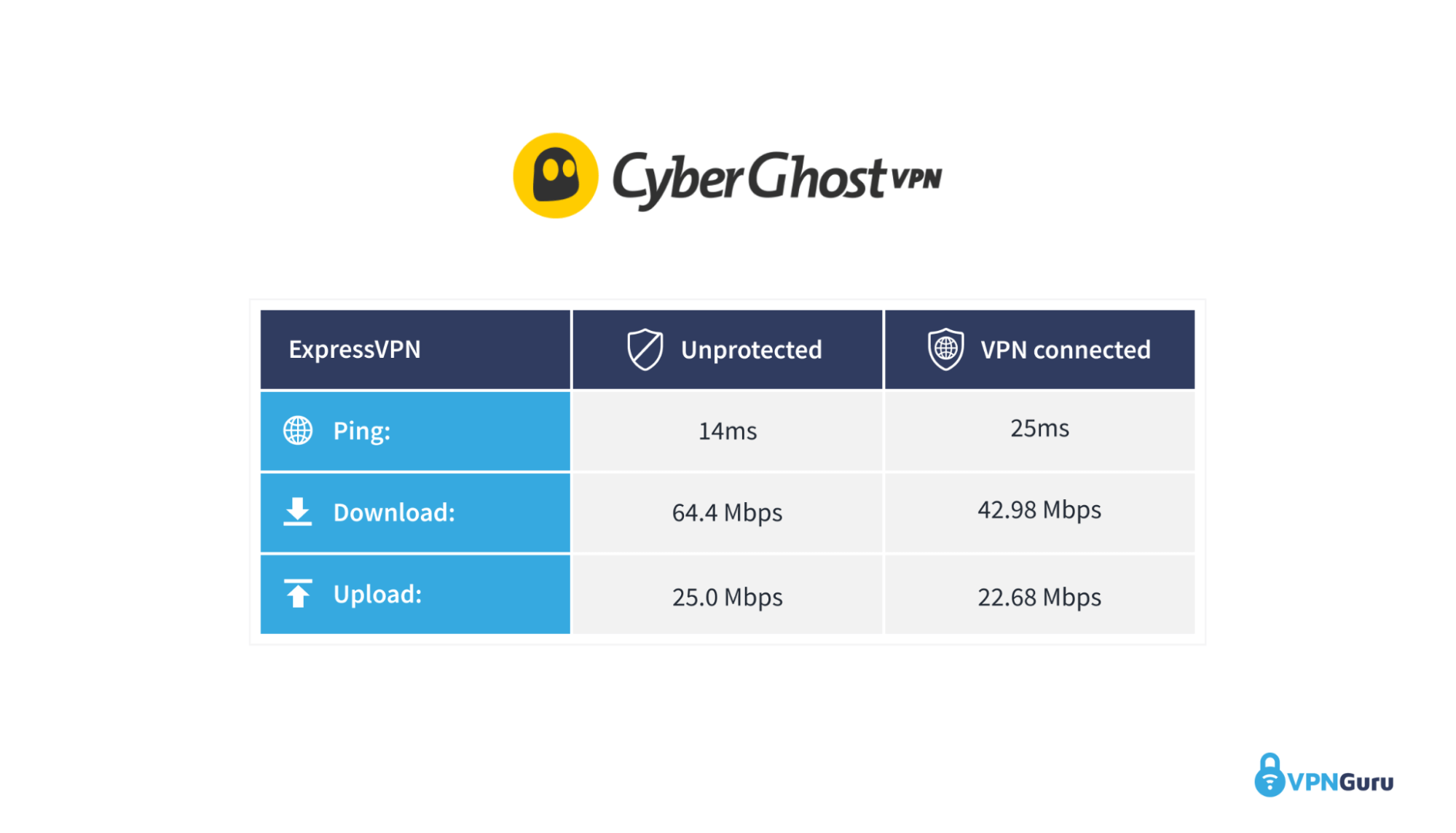 The security and privacy of CyberGhost are beyond reproach. It goes farther than most VPNs in enforcing its no-log policy, publishing a quarterly transparency report about privacy-invading requests it hasn’t complied with.

It’s also got special servers optimized for gaming, streaming, and P2P torrenting. But how fast are its general browsing servers?

Without a VPN, we get the following standard internet speeds: a 14 ms ping, 64.4 Mbps download, and 25.0 Mbps upload. We connected to the local server CyberGhost told us was the fastest and ran another speed test.

We got a latency of 25 ms, which we’re very happy with — anything less than double the unprotected ping is a fine result. Our download speed hit 43.0 Mbps, about a 35% decline. That’s a sizable drop, but still far more than enough for streaming video.

Upload speed was the real success. It only dropped to 22.7 Mbps (about 9.7%), making CyberGhost one of the best VPNs for posting content and live-chatting.

CyberGhost isn’t perfect, but it stacks up extremely well against the competition. If you want to know more, check out our full CyberGhost review.

Private Internet Access is often introduced as a budget VPN, but that label sells this powerhouse short.

PIA’s two-year plan indeed comes to $2.19 per month, one of the best VPN deals anywhere. But you get a lot more than you pay for with this VPN. It’s packed with features, including the WireGuard and OpenVPN protocols, an ad blocker, and an extra-secret SOCKS5 proxy. It also allows and supports torrenting.

Beyond that, Private Internet Access lets you connect ten devices simultaneously. That’s more than most and the next best thing to the unlimited devices you get from Surfshark. And let’s not forget that PIA has the biggest network on this list, with 35,000 servers in 84+ countries.

However, this is a list of the fastest VPNs, so we made sure to see whether PIA’s speeds were competitive. We used the WireGuard protocol and the recommended fastest server.

Three times the latency isn’t a very fast speed result, so we might not recommend Private Internet Access for gaming (go with NordVPN or ExpressVPN for lower latencies). However, the upload speed was fantastic, and the download speed was quite good (comparable to CyberGhost).

Of course, it could be faster, but it’s more than enough to stream HD video. That’s especially refreshing given PIA’s bargain prices.

Our full Private Internet Access review has the complete story.

Zenmate is a slightly newer VPN (though not as new as Surfshark). It’s had some issues in the past, but the latest versions have been good enough to get it into the top six with heavy hitters like ExpressVPN. 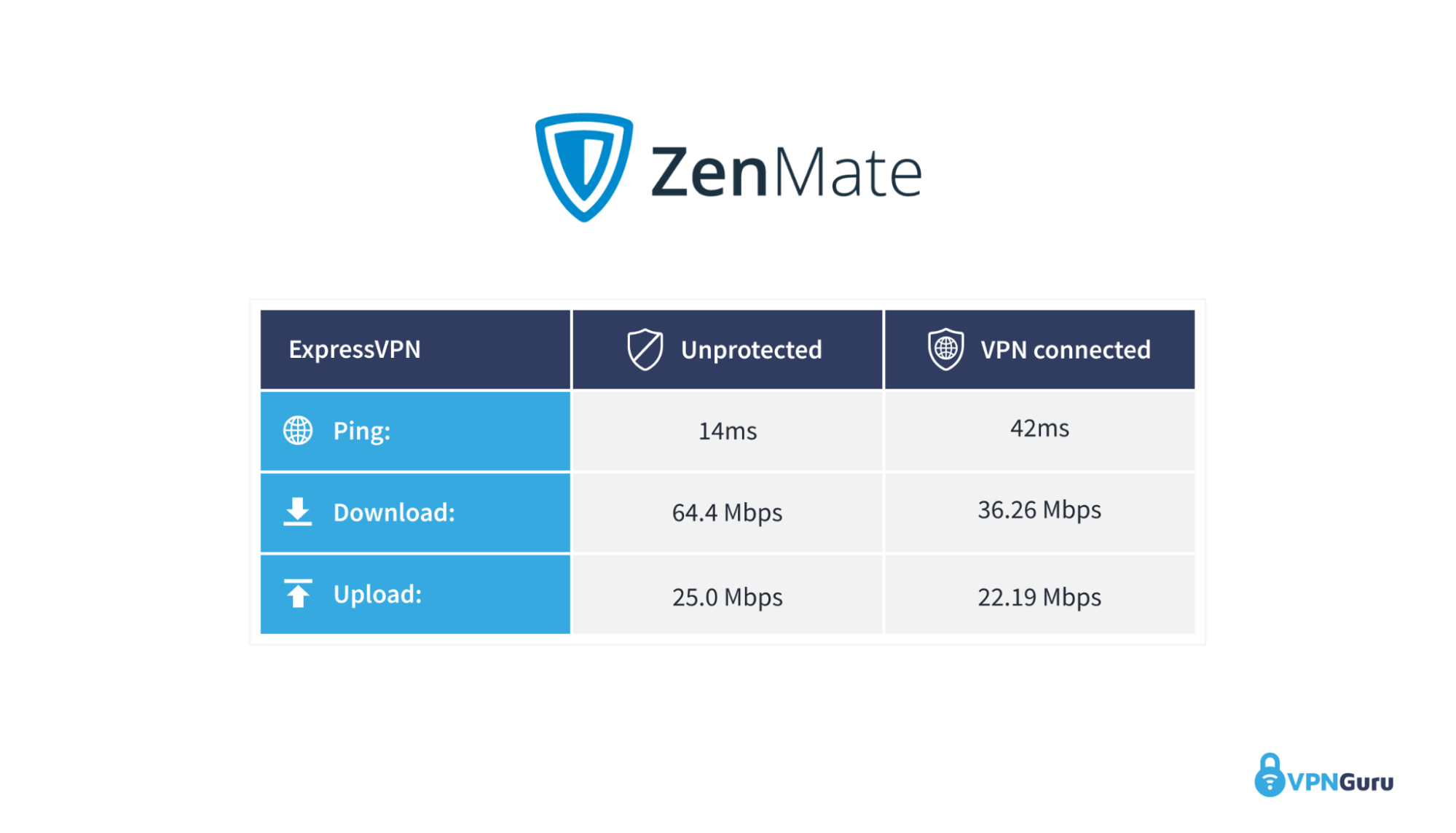 Thanks to improvements to its apps, Zenmate offers a user-friendly experience on a wide range of platforms, including desktop computers, Chromium browsers, and mobile devices. All its subscriptions support unlimited simultaneous connections for as little as $2.22 per month. If you’ve got a highly technical household, Zenmate could be your best friend.

Its server network is competitive but not impressive. With 3,400 servers in 74 countries, it’s got more locations than NordVPN but less power overall.

Zenmate hardly touches upload speeds, but there’s a speed loss of 43.7% on the download. However, if you have more than 10 Mbps of speed unprotected, you should still be set up well for streaming.

We recommend Zenmate if you’re looking for an affordable VPN service, and Surfshark doesn’t have a data center near you. To learn more, visit our in-depth Zenmate review.

All VPNs will slow down your browser a little. The trick is choosing one that will do the least to remind you it’s there.

According to our speed tests, the fastest VPN service is ExpressVPN, with Surfshark and NordVPN as close runners-up. CyberGhost, Private Internet Access, and Zenmate are also fast in the right contexts and have lots of other perks.

Interested in learning about even more of the fastest VPNs? Check out our full reviews page.

The fastest VPN: Which VPN has the best speeds?