Are you planning to torrent something but worried about repercussions? We don’t blame you.

With an increasing number of countries cracking down on individual torrenters, including Japan (which introduced new anti-torrenting laws in 2021), it’s normal to be nervous.

With a VPN like ExpressVPN, you can hide the original source and destination of the web traffic to and from your computer.

That means you can effectively hide the fact that you’re torrenting from your ISP. Even if your government wanted to crack down on torrenters, it wouldn’t have any ISP record to identify you.

The vast majority of torrenting legal cases are against the people creating and hosting illegal torrent sharing sites, but being careful is never a bad idea.

In this article, we’ll explore torrenting with ExpressVPN in depth. Find out whether it’s allowed, secure, private, and more.

The dangers of torrenting

Dangerous might sound hyperbolic, but torrenting is not without its issues. Let’s cover the four main problems with torrenting before we cover whether ExpressVPN can help.

Using a service like ExpressVPN addresses the first three issues. How? By hiding your IP address and encrypting your traffic.

If you think that all sounds a bit complicated, let’s cover the issue in a bit more detail.

Can I get caught torrenting with a VPN?

Unless you get caught in person with software or files on your computer, or you use a bad VPN with no P2P support, no, you can’t get caught torrenting when using a VPN service.

Normally, when you’re browsing the internet without a VPN, you connect directly to other servers through your router and ISP.

In the case of peer-to-peer or P2P sharing like torrenting, you connect directly with other computers or devices.

A VPN acts as a mediator. It gets between your ISP and the final destination or source of your internet traffic. 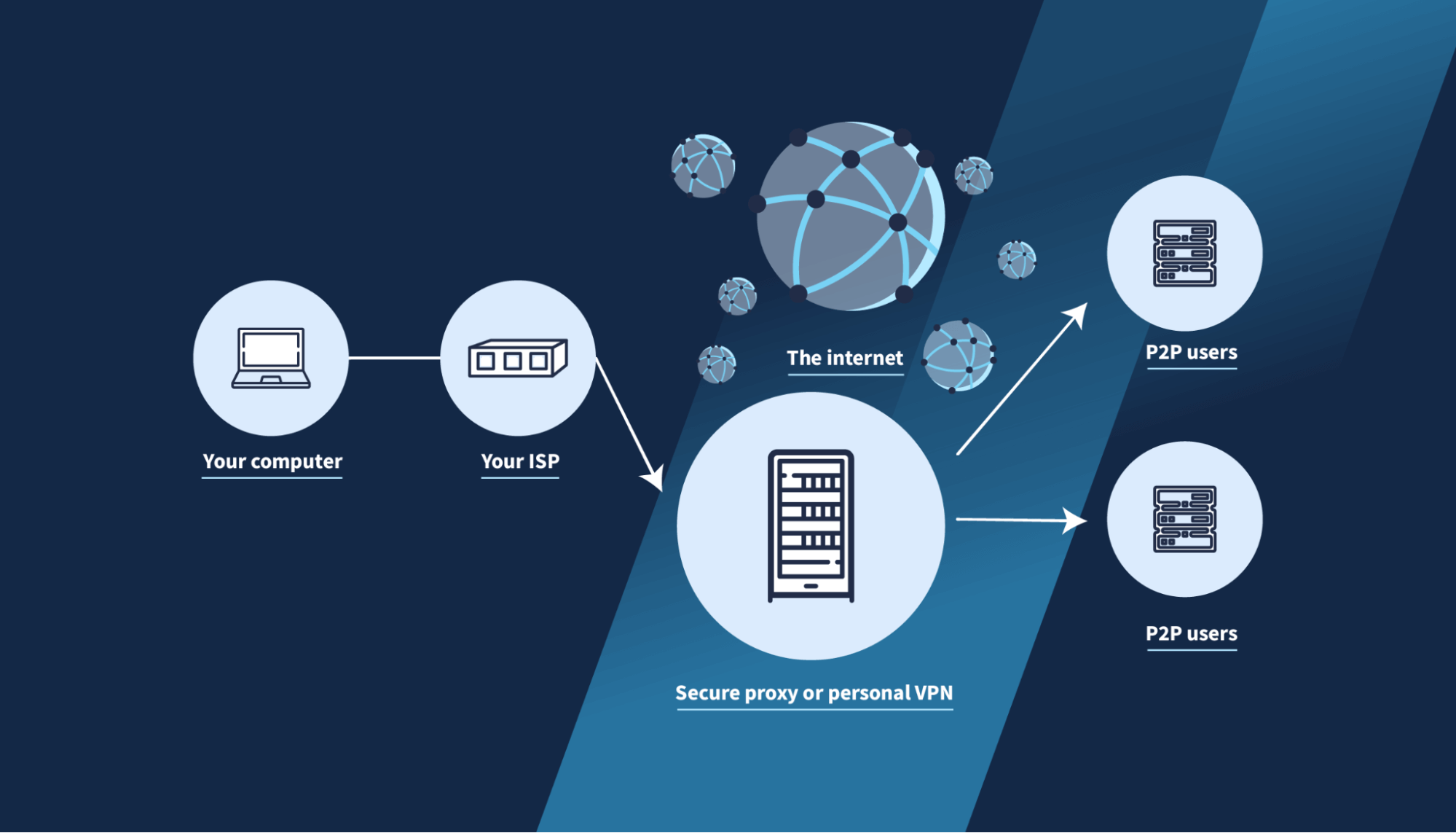 Any leading VPN provider, like ExpressVPN, also uses end-to-end AES encryption. That hides the contents of your web traffic from your ISP.

With this intermediary, any nosy parties won’t be able to see that you’re downloading torrents.

For all they know, you’re using the VPN to connect to a local game server so you can play with less lag or streaming content from your home country.

In other words, your VPN connection is private. As long as the torrent provider has a “no log policy” and is not keeping any browsing or usage history records, your privacy is secure.

So, if you’re wondering how to keep your data secure, using a VPN is a great first step.

Now that we understand how a VPN can help nullify the potential dangers of torrenting, we need to find out if ExpressVPN even allows its users to torrent.

Yes, ExpressVPN allows torrenting for all users. It clearly advertises its support for P2P file-sharing, including torrenting, on its official website.

So yes, you can definitely use ExpressVPN for torrenting files. It’s actually one of the most popular torrenting VPNs out there.

Here are a few reasons why:

If you want to see more of the pros and cons of using ExpressVPN, check out our in-depth ExpressVPN review.

How is torrenting safer when using ExpressVPN?

It’s not just about hiding activities from your ISP or a big brother government. Torrenting relies on P2P traffic.

That means you connect directly to other people’s computers without passing through another server first.

So any person you download a torrent from (or share one with) can potentially see your IP address. 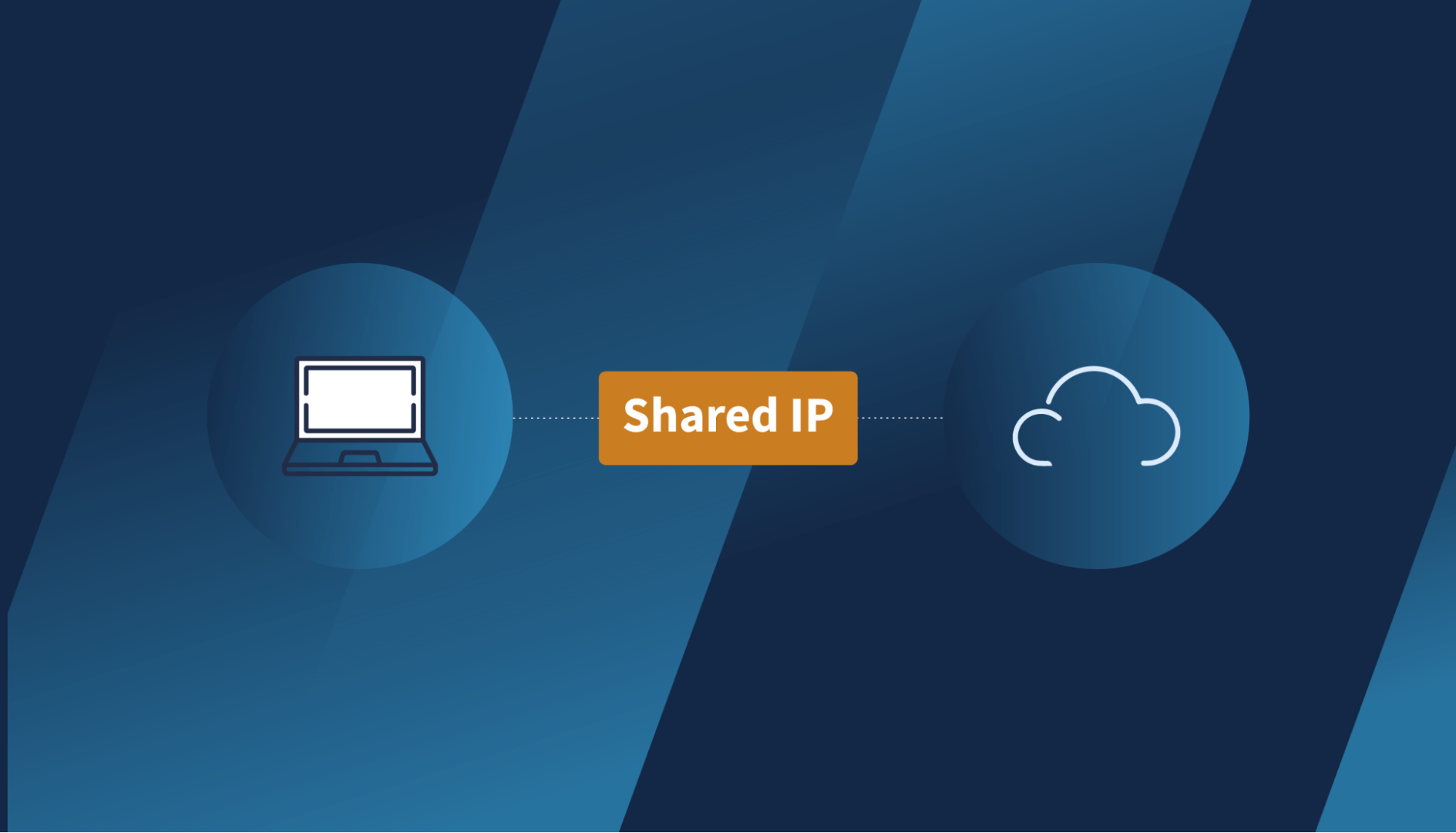 That can potentially open you up for attacks (from users) or takedown notices and legal action if you live in a country with strict copyright laws.

When using ExpressVPN, you don’t connect directly with other torrent users or the swarm using your real IP address.

All they see is your VPN server’s IP address.

It essentially prevents a DNS leak, protecting your privacy and security. If you try any test sites like DNSleaktest.com, you won’t see your actual ISP and location represented at all. 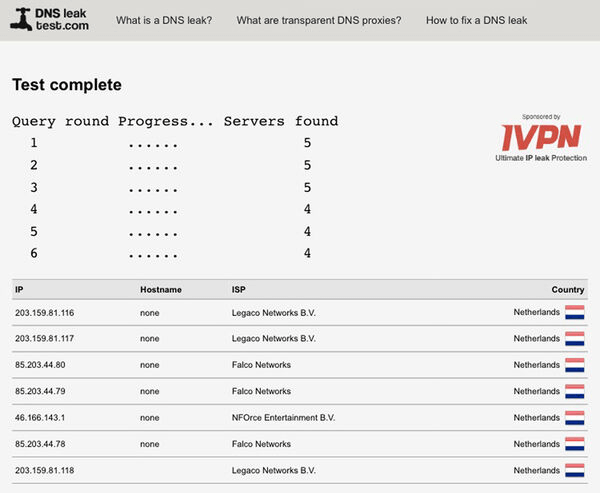 ExpressVPN is so dedicated to hiding your IP address completely that it developed a custom tool to test for leaks, available free on GitHub.

If you’re convinced and want to give ExpressVPN a try when torrenting, let’s cover the actual how-to steps.

There’s no downside to trying it out. There’s no free VPN or free trial period, but ExpressVPN offers a no-questions-asked 30-day-money-back guarantee. If you’re not impressed, you can cancel your subscription and get your money back.

How to use ExpressVPN with a torrent client

Really, it only takes a few easy steps — three, if you’re counting.

The first step is self-explanatory. Choose the best plan for you and sign up as an ExpressVPN user.

Longer plans are a lot cheaper per month, but we understand that it can be hard to commit a larger lump sum at once.

The signup process is simple and doesn’t need much explanation.

Just as with any other paid service online.

Next, we need to line up our torrent client, where we can use the VPN to torrent something.

Make sure you download it from the client’s official website. Search for the client on Google and make sure the domain is legitimate before downloading.

You also probably want to opt out of any unwanted bundled software. Also, for 99% of users, you only need the basic, free uTorrent or qBitTorrent client.

So, download the client and install it on your computer.

3. Turn on the VPN in the torrent client settings, or use ExpressVPN for all traffic

Once you’re in, you could theoretically set up the VPN as a proxy server manually from within the client.

But this may seem complicated if you’re not that good with computers.

Instead, you can simply download and install the ExpressVPN app on your device or even router. ExpressVPN supports all major devices and operating systems.

In the desktop app settings, you can choose which apps you want to use the VPN when connected.

For example, you can choose the “only allow selected apps” and choose your torrenting client and web browser of choice. 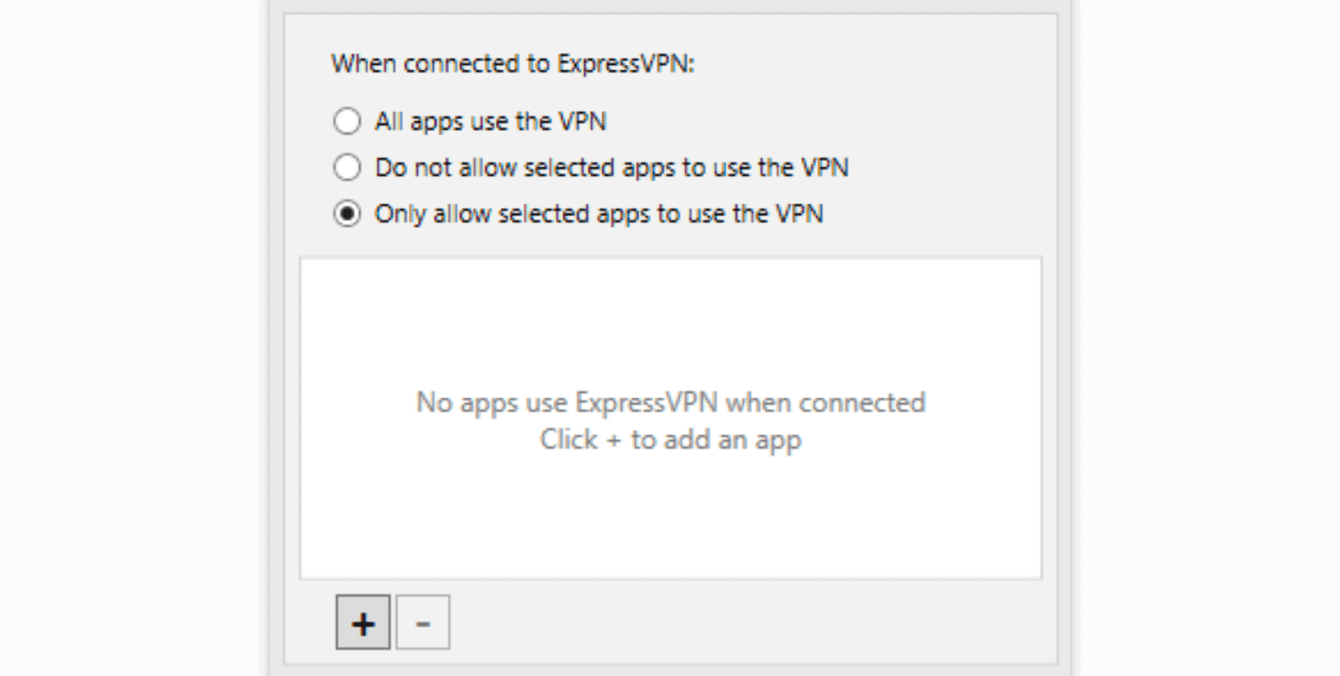 That means you can choose which applications you want the VPN to reroute traffic for. As an example, you may want to unselect your favorite online game or Netflix.

You can also choose to reroute only the traffic from your torrenting client. That will set up a de facto torrent VPN, even though you’re just using the app to install it.

The benefit of this approach is that you can easily turn the VPN on or off for other software, like your browser.

You’re now ready to start downloading torrents without getting spied on.

Use ExpressVPN when searching for torrents

If you’re looking into getting a VPN for privacy reasons, just using it while you torrent is not enough.

To completely cover your tracks, you must also use it when you’re searching for torrents or magnet links.

It’s blatantly obvious that you’re a torrent user if your ISP has a history of searching for “some torrent” in Google or visiting a notorious torrenting website.

NordVPN vs. ExpressVPN for torrenting

Is ExpressVPN really the best option for torrenting? Let’s compare it with leading competitor NordVPN.

Both VPN providers offer the most crucial features you’d want to see when choosing a VPN for torrenting:

First of all, both VPN providers allow torrenting or P2P traffic on their servers. That’s obviously requirement number one.

They also have similar AES encryption and no logging privacy-friendly policies. Again, both options offer an instant kill switch, which immediately stops all internet traffic if you lose the connection or your IP is leaking.

In terms of reliability, security, and features, the two options are really neck-and-neck. But there’s one area where ExpressVPN stands out — and that’s speed.

The speed difference is significant

While both companies offer thousands of servers in dozens of countries, one option is the clear winner in speed.

Just look at the results from our internal speed test of the two different clients. 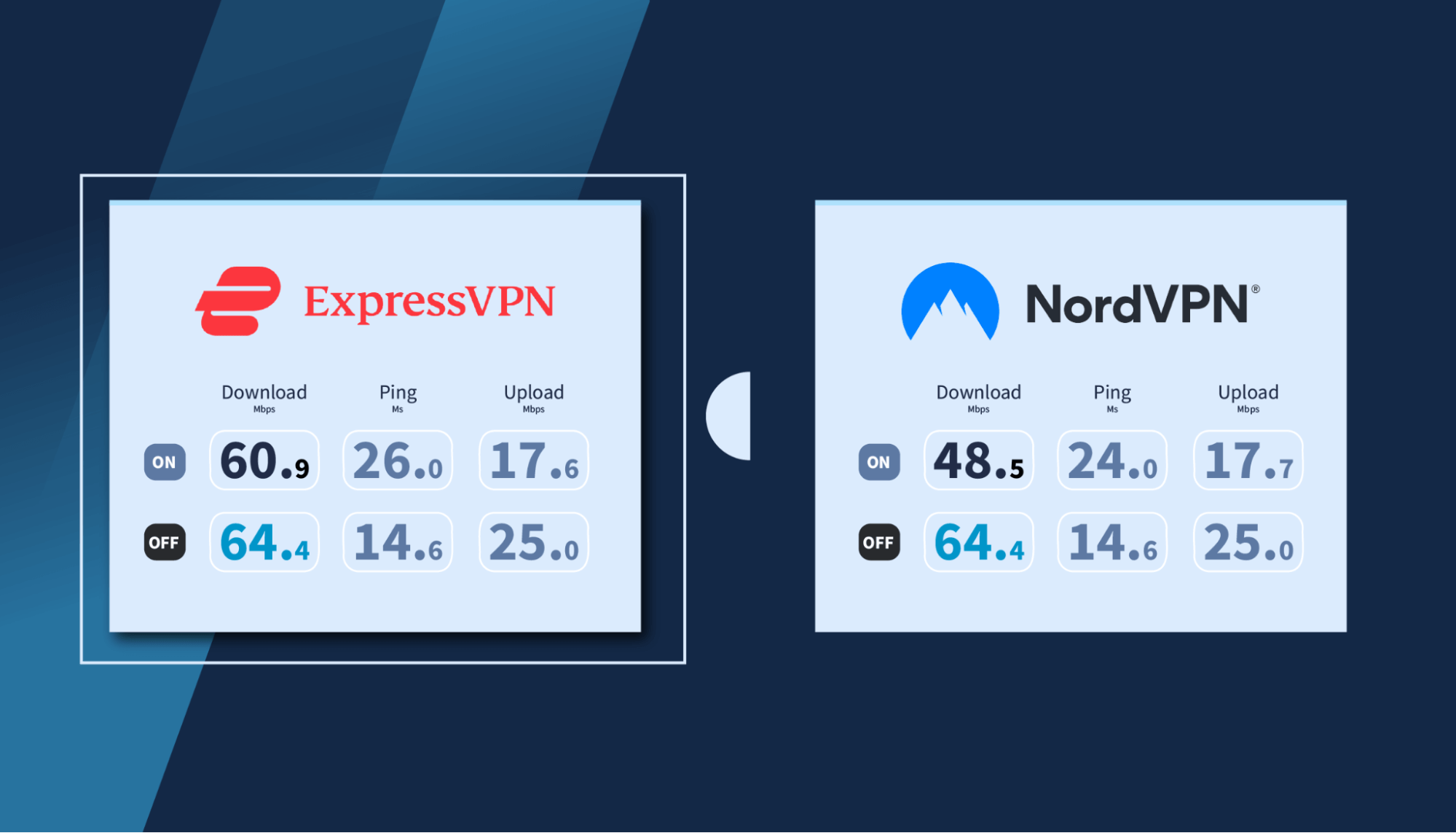 Look at these numbers. With ExpressVPN, well over 90% over the original 64 Mbps stayed with the VPN turned on. Upload speeds, on the other hand, saw a fairly significant drop down to 17.6.

With NordVPN, we noticed a drop in both download and upload speeds. If you have a fiber connection, you’ll likely experience more severe speed drops. The faster the connection, the larger the decrease.

It’s worth noting that we only tested the major U.S. server in this test, as that’s best suited for this use case.

There’s little point in routing your torrent traffic through some small pacific nation if you don’t have to.

The bright side for NordVPN is that it has a slight advantage in ping. But a two-millisecond difference is only noticeable to a world-class FPS player.

If you want the peace of mind of torrenting with a VPN without sacrificing speed and convenience, ExpressVPN is a great choice.

But ultimately, the choice is yours. What’s an extra layer of privacy and security worth to you while torrenting?

To many of us, it’s definitely worth the price of a coffee per month. If you feel the same, choose the torrenting VPN plan from ExpressVPN that best suits your needs below.

Get Best Deals on ExpressVPN