Home > Blog > CyberGhost vs ExpressVPN: A complete and unbiased review for 2022

CyberGhost vs ExpressVPN: A complete and unbiased review for 2022

Are you looking for an extensive comparison between CyberGhost and ExpressVPN?

Making this type of decision is often challenging.

VPN solutions can seem pretty similar on the outside. How can you tell which of them is better for your specific situation?

To answer this question, we’ll explore the main differences between these two services and cover specific criteria you should consider when choosing a virtual private network.

Let’s start with the basics.

ExpressVPN is an award-winning VPN provider best known for its excellent support and strong security policies. It offers a strict no-logs policy, access on simultaneous devices, and dynamic IP addresses.

This VPN provides a broad network of 3,000+ servers in more than 94 countries and offers most of the features you’d expect from a premium DNS, including:

Founded in 2009, ExpressVPN has a proven track record of service, making it a trustworthy and reliable organization for anyone looking to protect their privacy.

ExpressVPN is also based in the British Virgin Islands, which exists outside of major international surveillance alliances. This means the organization isn’t obligated to provide user information to any government.

This gives you the freedom you need to enjoy the internet safely and without restrictions.

If you’re looking for a fast, reliable, and powerful VPN service provider with a proven record of experience, then ExpressVPN is probably a good fit.

Note: To learn more about ExpressVPN, we suggest checking out our comprehensive and up-to-date ExpressVPN review.

CyberGhost is a VPN solution that combines affordability with reliability. It provides you with great speeds, low prices, and solid streaming and torrenting functionality.

Some of the top CyberGhost’s features include:

With 7,200 servers in over 91 countries, CyberGhost helps you protect your information wherever you are.

One of the best things about CyberGhost is that it provides dedicated servers optimized for torrenting.

Even though torrenting isn’t illegal, per se, most torrenting websites and platforms offer free access to copyrighted content. Accessing this type of content might put you on the radar of the law, as downloading copyrighted material is punishable by law in most countries.

If you’re looking for an affordable, torrent-friendly VPN that enables P2P connection, then CyberGhost might be an option.

Note: To better understand CyberGhost’s features, make sure to read our CyberGhost review.

What are the differences between ExpressVPN and CyberGhost?

Now that you understand the basics about ExpressVPN and CyberGhost let’s dig deeper into their features. What do they offer, exactly?

In terms of security, ExpressVPN offers most of the features you should expect from a VPN in 2022, including:

What makes ExpressVPN truly different, though, is its remarkable dedication to privacy.

ExpressVPN doesn’t keep any logs of your online activity. TrustedServer deletes all data every time a server is rebooted. 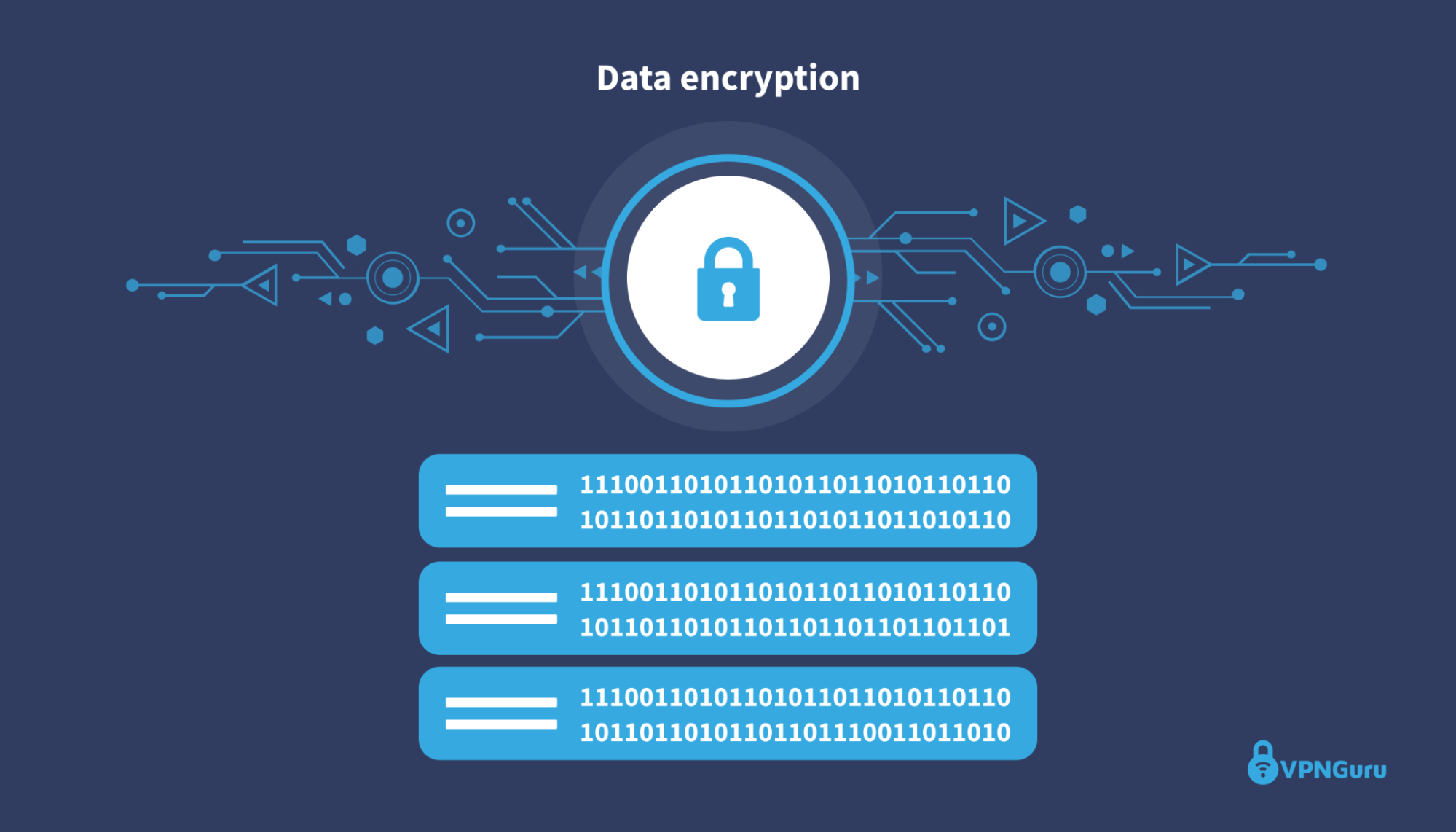 How can you trust that your data isn’t being stored?

Auditors from PwC analyzed ExpressVPN’s code and interviewed some of its employees to ensure that ExpressVPN complies with its security policies.

You can read the full report here.

ExpressVPN’s willingness to bring in external auditors to review its controls shows its commitment to keep users’ confidential data anonymous and private.

A VPN connection will always reduce your internet speed to some extent.

This speed reduction may vary depending on the server location you’re connected to.

That said, any solid VPN provider shouldn’t reduce your initial connection speed by more than 20%.

For instance, if your current internet connection speed is 50 Mbps, your speed with a VPN connection should be no less than 40 Mbps.

By testing ExpressVPN’s speeds, we can quickly see that it’s considerably fast compared to other popular VPNs.

Before connecting to ExpressVPN, our initial download speed was 64.4 Mbps.

Just keep in mind that connection speed fluctuates and is dependent on a myriad of factors. Your individual experience may be different depending on your location and internet service provider, among other things.

To offer network stability, a VPN must offer a wide range of both digital and physical servers. This is especially important for users that change locations often, like frequent travelers or business people.

With 3,000+ servers in 160 locations, ExpressVPN offers one of the largest server networks available. 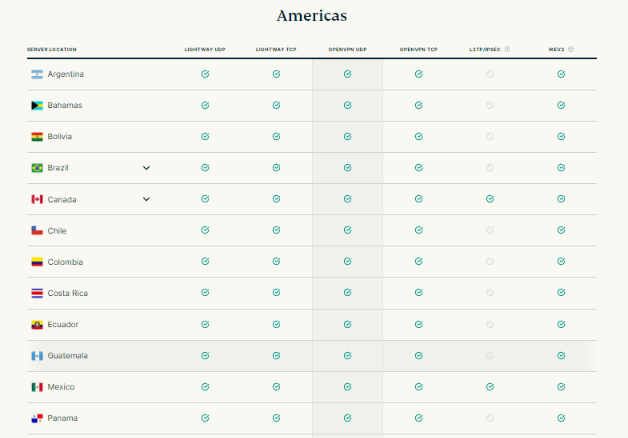 This network isn’t only large but also diverse.

There are servers in 94 countries, including some where internet access is restrictive or limited, like Vietnam and Pakistan.

All ExpressVPN’s servers are RAM-only. This means servers can’t store any information, making it much harder for cybercriminals to access confidential data.

ExpressVPN is P2P-friendly, which is an essential element for torrenting.

Also, most of ExpressVPN’s servers unblock geo-restricted content and platforms, like Netflix, Amazon Prime, CrunchyRoll, Hulu, BBC iPlayer, and many others.

ExpressVPN offers VPN split tunneling, a feature that allows you to “categorize” traffic and create two routes. Some device traffic goes through a VPN connection while the rest access the internet directly. 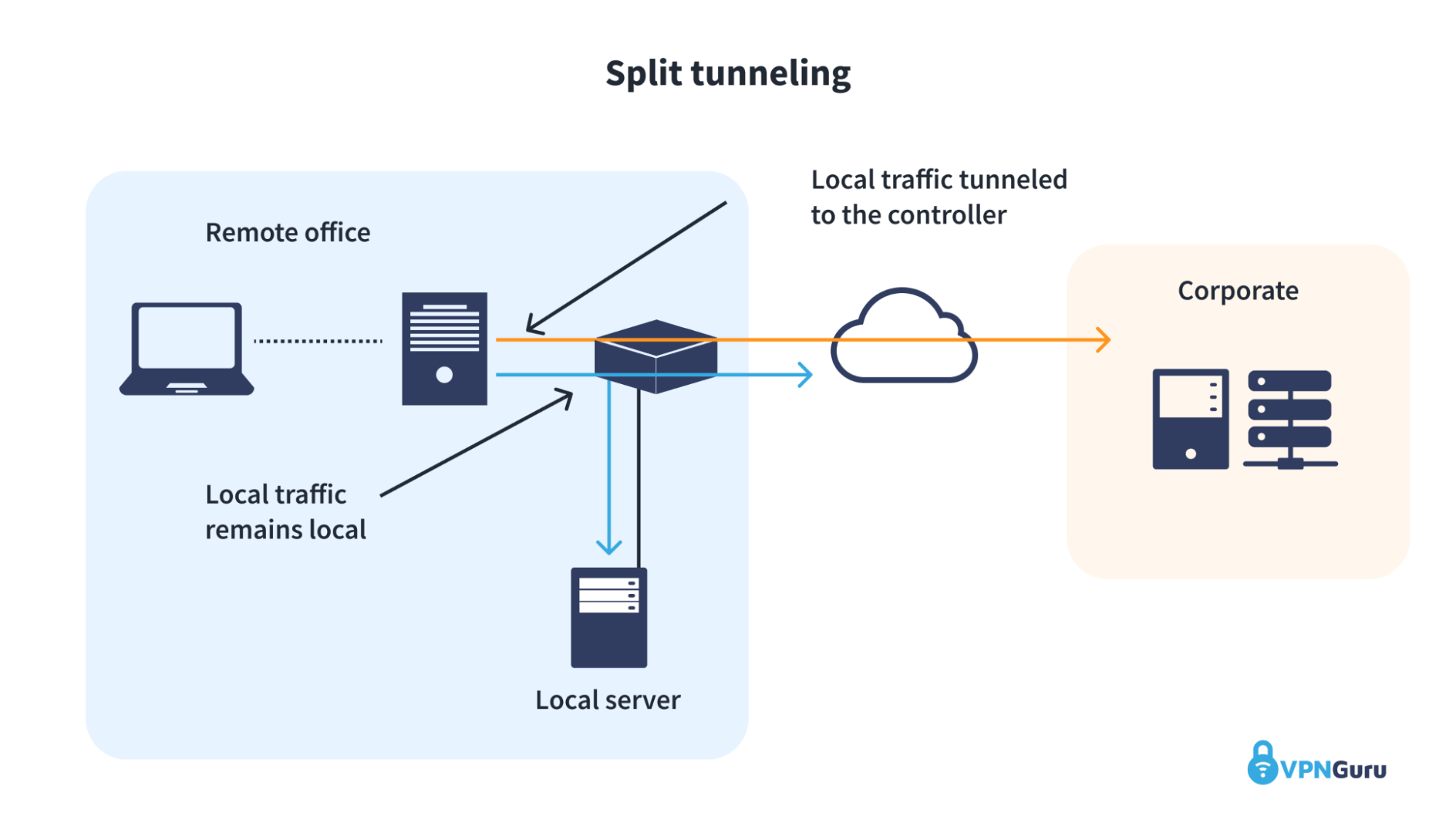 This is especially helpful for low-risk activities that require more bandwidth (e.g., streaming a movie or playing a video game).

In general, ExpressVPN works amazingly well for entertainment purposes, as it provides you with the necessary speeds to stream 4K movies and helps you access most of the content you’re looking for.

It provides you with solid encryption protocols, private DNS servers, a dedicated IP address for each user, Wi-Fi protection, and most of the features you need to keep your information secure and private.

That said, there are a few differences between CyberGhost and ExpressVPN.

Let’s start with the good:

Before connecting CyberGhost, we had a 60.7 Mbps download speed. With CyberGhost connected, we managed 53.21 Mbps for download. That’s a 12.42% speed reduction.

Even though that’s great, the math falls in favor of ExpressVPN.

Multiple tests have shown that ExpressVPN’s servers provide a faster connection in more regions than CyberGhost.

CyberGhost offers 7,100 server locations in over 91 countries, including:

This makes it the second-largest server network available.

The only platform outperforming these numbers is, you guessed it … ExpressVPN, which offers servers in more than 94 countries.

CyberGhost also works great for streaming and torrenting. It provides good enough speeds to enjoy your favorite shows and movies in 4K UHD.

CyberGhost allows you to protect up to seven simultaneous devices (two more devices than ExpressVPN, which only allows for five simultaneous connections).

Pricing without context is useless.

Now that you understand what both solutions offer, it’s time to determine which offers the best value for the money you’re spending.

The price will depend on the time you’re looking to use the platform. The longer the plan, the lower the price. 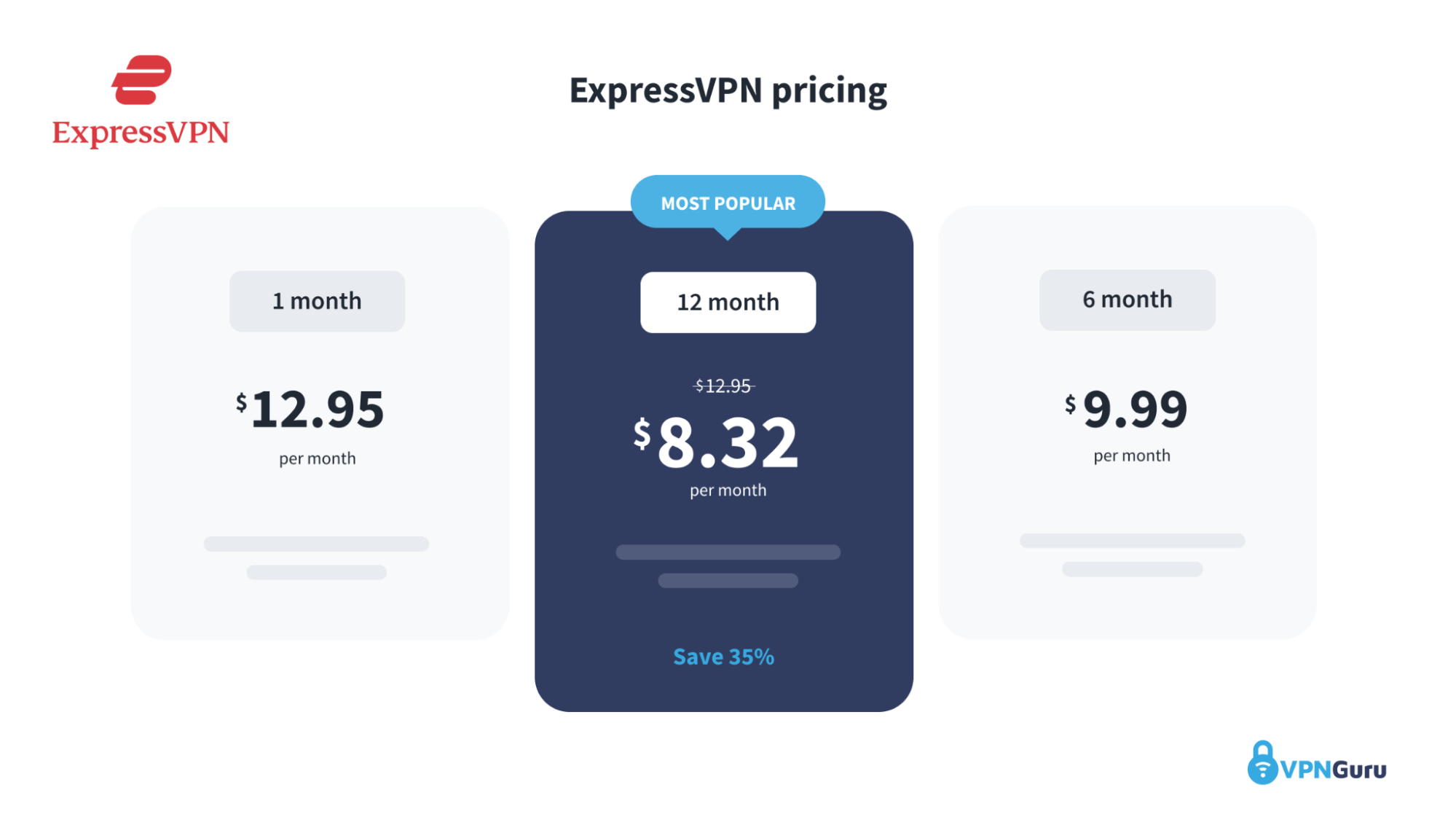 When you commit to a 12-month subscription, you get a dazzling 35% discount.

If you aren’t sure about ExpressVPN, you can try out the monthly plan before committing to a longer subscription. This way, you can explore all the features more thoroughly and see whether they adapt to your needs.

Besides, all plans come with a solid 30-day money-back guarantee, so there’s no risk involved in your purchase.

CyberGhost offers different pricing plans based on the time you’re planning to use the VPN service, including: 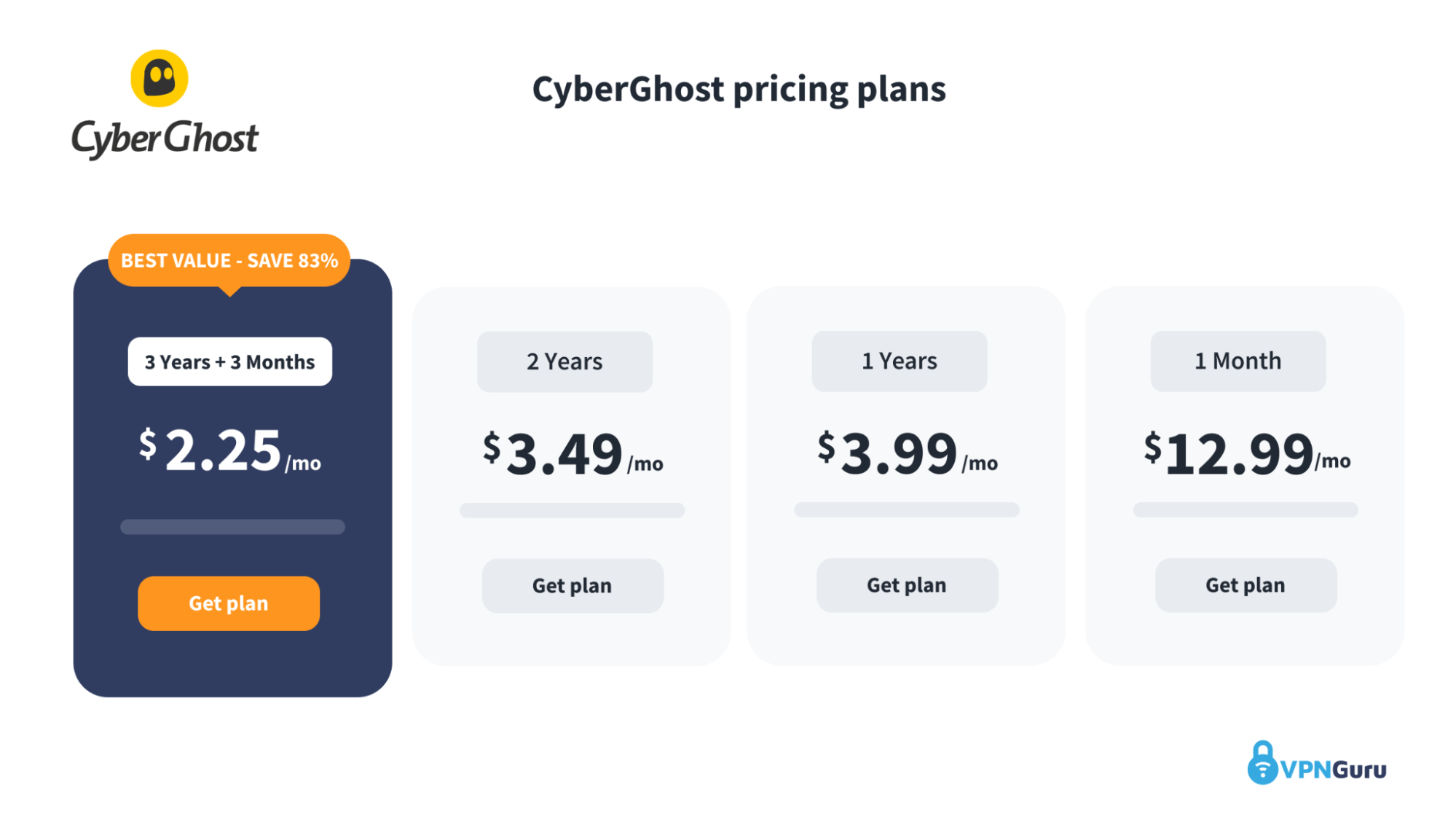 CyberGhost also offers a considerable discount on its three-year plan. In addition to getting 83% off on the total price, you also get three extra months for free.

All plans include a 45-day money-back guarantee, making it one of the best guarantees available today.

To help you make a faster and more informed decision, let’s quickly break down the main differences between ExpressVPN and CyberGhost.

So, which one, CyberGhost or ExpressVPN?

CyberGhost and ExpressVPN are both great VPN providers.

Both provide a wide range of server locations in diverse countries.

Both are fast and reliable.

And both work great for streaming and torrenting.

So, how can you choose the right one for you?

It all comes down to your budget.

If you’re looking for a budget-friendly VPN that offers solid security features, multiple servers, and streaming functionality, CyberGhost might be the right option for you.

If, on the other hand, you want a premium VPN that offers the most robust security policies and a wider number of servers and countries, ExpressVPN is probably a better fit.

To get a complete picture of both solutions, we suggest you read our extensive CyberGhost and ExpressVPN reviews.

And, if you’re still in “research mode,” you can always explore our complete list of VPN reviews. They’ll help you find a service that adapts to your exact needs.

CyberGhost vs ExpressVPN: A complete and unbiased review for 2022